Guy Ritchie returns to his comedically inclined crime/thriller roots with The Gentlemen - featuring a stellar cast with Matthew McConaughey, Charlie Hunnam and Hugh Grant all caught up in the sale of a £500,000,000.00 marijuana empire where everyone wants their cut. Universal Pictures brings The Gentlemen to 4K UHD Blu-ray with a native 4K transfer in HDR10, a solid Dolby Atmos mix, and a sadly anemic set of bonus features. If you're on Ritchie's bandwagon, this is well worth Checking out. Highly Recommended

It's not easy building a respectable marijuana empire - it's even more difficult to sell it. Michael Pearson (Matthew McConaughey) has been in the game for a while, built just such an empire, and now it's time to cash out before the industry goes legit. Only the sale of a £500,000,000.00 empire isn't easy - even when you're discounting it at £400,000,000.00! With the American Matthew (Jeremy Strong) on the hook for the sale, tabloid journalist Big Dave (Eddie Marsan) aims to out Michael's colorful past out of spite. But slimy private investigator Fletcher (Hugh Grant) looks to cash in by giving Michael's right-hand man Ray (Charlie Hunnam) the whole story before it unfolds. 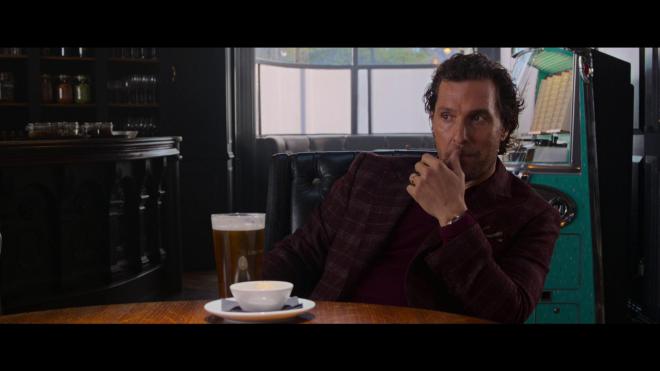 In 1999 I just got my driver's license. I loved taking myself to the movies - mostly because at 17 I could go see whatever movie I wanted without a parent and the local Ann Arbor arthouse theater ran some pretty interesting stuff. As a "know it all" teen who read Kafka to prove they were cool - I took a chance on a British movie from a first-time filmmaker simply because the title Lock Stock and Two Smoking Barrels sounded cool. That afternoon on I've been a Guy Ritchie fan. Admittedly not everything the man's made has been great, but I love most of his movies, Lock Stock, Snatch, RocknRolla were great, begrudgingly I admit Aladdin is at least a fun show for a single watch. Then there's what I call his "Madonna" period of Swept Away and Revolver, that are better left alone. his Sherlock Holmes movies are fun and I did enjoy The Man from U.N.C.L.E. - but King Arthur was an oddly inconsistent misfire for a fairly solid filmmaker. The Gentlemen feels like a genuine return to form for Ritchie.

Gather a cast of great actors, give them some colorful characters, and let things come to life - that's where Guy Ritchie's The Gentlemen excels. With Ritchie's signature splashy style and writing, this great cast has a lot of fun material to work with. While The Gentlemen - like Lock Stock and Snatch before it, The Gentlemen enjoys making light of life's unpleasantries with inventively gory deaths and bits of revenge. I was thoroughly delighted by this movie. A small hit when it was released in January, I sadly didn't get a chance to check this one out in the theater and I'm kinda kicking my own ass for that. This is a great theater movie! 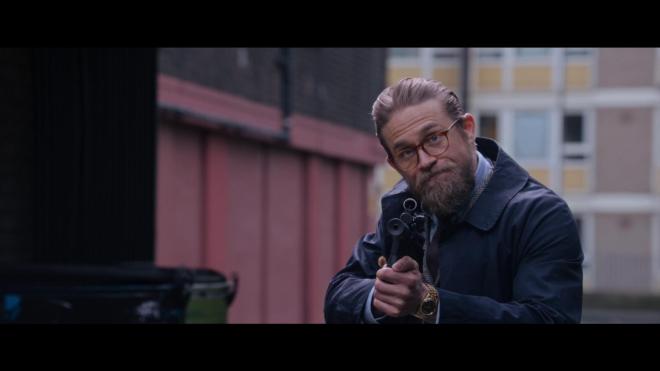 Where some of Ritchie's latest efforts could feel a bit inconsistent, from frame one when a slimy Hugh Grant sits down to tell a primped up Charlie Hunnam a "story" the film gently presses on the accelerator and keeps pushing right up to the big crescendo - and then floors it to the finish! I was chuckling and laughing from the get-go and had a big smile on my face at the very end. It's not perfect - it kinda starts to drag in the middle and Michelle Dockery doesn't really ave much to do, but it finds its energy and sprints to the finish. If there's a real criticism I have is not enough Colin Farrell - he steals the show. If imperfect, it's nice to see Ritchie hasn't lost his touch with the crime comedy stories that kickstarted his career.

Universal brings The Gentlemen to 4K in a two-disc 4K UHD Blu-ray + Blu-ray + Digital set. The discs are housed in a standard sturdy black UHD two-disc case with identical cardboard slipcover artwork. The disc loads to an animated main menu with traditional navigation options. The included digital slip is redeemable only with Apple TV and does not port through Movies Anywhere.

The Gentlemen was shot at 3.5k but finished with a 4K digital intermediate - so technically this is a native 4K release but slightly upsampled from a lower shooting resolution - if that makes any sense at all? Honestly, I'm impressed with the results here so if anything the onus for filmmakers shooting at 3.5k should be to finish on a 4K DI regardless. Flipping between the 1080p Blu-ray and this 4K UHD disc, I could immediately appreciate the improvement in details - skin pigmentation, costuming, personal grooming habits of various actors were on display. When you can start to count liver spots or individual beard hairs, you're off to a good start.

Like any Ritchie film, The Gentlemen is colorfully drab, meaning we're playing around in a dark seedy side of society but that doesn't mean there isn't room for any flash. With HDR10 colors go bold here - from the intricate lordly estates to Michael's underground weed farms and their bright grow lights, to Ray's posh house - there is plenty of pop throughout. I was especially impressed with color shading when Ray and Fletcher are going over the "story" between different low light locations and how black levels maintained their deep inky shades while allowing for color and shadow gradience giving plenty of spectral highlights. Whites are well balanced, nice and bright without any blooming. The Gentlemen already enjoyed a strong 1080p presence, but the 4K transfer with HDR really opens up the image giving stronger three-dimensional presence - essentially doing what the format should do and that gives viewers an appreciable improvement in all-around visual quality.

Both the 4K UHD Blu-ray and the 1080p Blu-ray of The Gentlemen rolls in sporting the same effective Dolby Atmos (TrueHD 7.1 default) audio mix. Like most Ritchie movies, the mix can go from 0 to 60 at the drop of a hat and this Atmos mix is more than sporting enough to play the game. There's a great fight sequence with Colin Farrell's fighter boys he brought up from the streets that is a great work with the mix as they perform their stunts the mix pans across the sides and rears and then lifts up and over the verticals - it's awesome stuff! But that's more of the action highlight material. Most of the time the verticals don't really get that pinpoint sound effect placement and instead open up the audio to give a sense of space and dimension to any given location. The sequence where Michael tours Matthew of one of his growing facilities moves from a wide-open field, into a confined shipping container, and then down into a basement with grow lights humming all over the place - the mix traveled those locations giving them a distinct but subtle auditory presence. There are a couple great kills that also make fine use of the extra spacing - but I won't give those away here. While this one could have skirted by with a 5.1 mix just fine, it's a treat with a full Atmos mix. Dialog is clean and clear - if you have an ear for the dialects. You may want to notch up the volume one or two paces just so you don't miss any of the mumble lingo.

I guess you can call these bonus features? There's really nothing of value here, sadly. And by "nothing" I do mean nothing.

I love a great gangster comedy. It's not easy to make crime funny while also deplorable and yet Guy Ritchie finds a way to pull it off with gusto. With The Gentlemen, the director hasn't been in this great shape since 2008 - and even then one could argue since Snatch stormed the screens. With a terrific cast playing colorful characters there's plenty of cinematic scene-chewing to go around with everyone getting at least a moment or two to shine. Sure, it's not Ritchie's best, but it's the first film of his to come out in a long while that actually felt like one of his creations instead of something shopped and grown by committee.

Universal delivers a terrific 4K UHD Blu-ray release sporting a grand transfer with HDR10 and a rousing Dolby Atmos audio mix. The only downside of this disc is the bonus features package that is so pointless it may as well not have been included. Such as it is, the movie is well worth the price of admission. Highly Recommended.