In Martin Scorsese's masterful neo-noir crime thriller Shutter Island, a missing person's case inside a creepy psychiatric facility compels Leonardo DiCaprio's detective to investigate deeper into questions about reality, sanity and seeing the humanity in criminal offenders.  Celebrating its 10th anniversary as a SteelBook edition, the masterful crime mystery arrives on the shores of 4K Ultra HD with a strong, generally satisfying Dolby Vision HDR presentation, an identical DTS-HD MA track and the same set of bonuses. Nevertheless, the overall UHD package is Recommended for staunch Scorsese fans and cinephiles.

Martin Scorsese, one of the greatest filmmakers of our time, tackles his first psychological thriller in the ingeniously masterful Shutter Island, an adaptation of Dennis Lehane's novel garnering nearly as many fault-finding disapprovals as it did applauding praises. Frankly, detractors unfairly focus on the film's conclusion and the setup to the supposedly predictable reveal. Such biased criticism, however, sadly overlooks the real genius in this beautiful gothic tale about a pair of U.S. Marshals (Leonardo DiCaprio and Mark Ruffalo) investigating a missing person's case in a psychiatric facility populated by violent offenders. From the moment DiCaprio's disorientated Teddy Daniels stares at his own reflection in the mirror, we are thrust into a strange, foreign world that's as far from our understanding of normal as possible.

Given the full reins to fulfill his every whim, Scorsese flaunts his film nerdiness on an island oozing in the sort of hyperrealism only cinema can conjure and littered with various allusions to many film classics. It's a highly subjective fantasy fabricated by a hyperactive mind — a hysterical vision soaked in odd Foley effects, obvious rear-screen projection backgrounds and deliberately unconventional editing choices. The legendary director takes his love of cinema a step further by turning a rather traditional crime detective mystery into a rewarding homage to pulpy, B-quality film-noir, bathed in as many dark, ominous shadows as excessively saturated colors in the overtly dramatic flashbacks while the present reality is a bland monochromatic palette. Underscoring all this is a brilliantly subtle and understated theme on prison reform and the controversial moralities surrounding the rehabilitation of criminals. 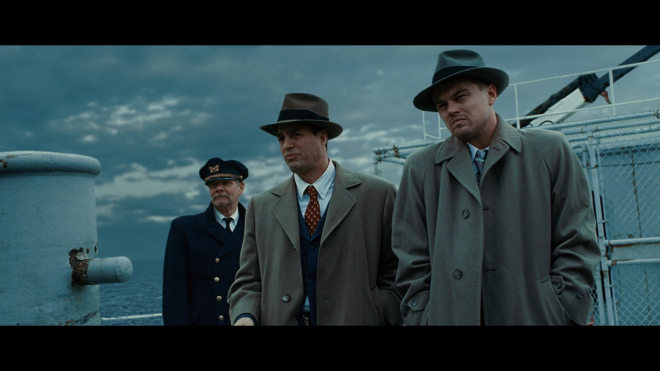 Ultimately, Scorsese masterfully crafts a commentary on the power of cinema to make audiences feel compassion not only for likable make-believe protagonists but to also sympathize with fictional personalities that are otherwise unredeemable and who society has conditioned us to regard as unsavory. Think Fritz Lang's M, The Godfather, Taxi Driver, Requiem for a Dream, Thank You for Smoking, Nightcrawler and most recently, Joker as prime examples, as well as many, many others. In the case of Shutter Island, Scorsese compels moviegoers to see the corrupt violent offenders of civil society and those deemed mentally unbalanced as complex human beings capable of change, making it a brilliant piece of cinema that has far more going for it than just a simple setup for a surprise revelation.

For a more in-depth take on the film, check out David Krauss's excellent review of the 2010 Blu-ray HERE.

Paramount Home Entertainment brings Shutter Island to Ultra HD Blu-ray as a two-disc SteelBook combo pack.  The dual-layered UHD66 disc sits comfortably atop a Region Free, BD50 disc on the same panel, and both are housed inside a glossy, blood-red SteelBook. At startup, viewers are taken directly to a static menu screen with the usual options and music.

The labyrinthine mystery arrives on the shores of Ultra HD with a strong and generally pleasing HEVC H.265 encode, which, for all intents and purposes, appears to have been struck from the same 2K digital intermediate as the 2010 Blu-ray release. And sadly, the new 2160p transfer may not be the improvement over its predecessor fans were anticipating, but there are plenty of appreciable differences to make this a notable upgrade nonetheless.

One of the more immediate and apparent aspects are the richer blacks throughout, bathing the creepy island and the gothic facility in luxurious, silky shadows while still maintaining excellent detailed visibility within the darkest, gloomiest corners. On the flip side, the vibrantly flamboyant palette during flashback sequences doesn't appear to have benefitted significantly in this Dolby Vision presentation. Don't get me wrong, colors are fuller and a tad more animated with greens and yellows, in particular, displaying a lightly wider and brighter range while facial complexions are healthier with rosier, peachier skin tones. The big win in this HDR edition, however, comes from the improved contrast levels, providing Robert Richardson's neo-noir cinematography with more dynamic whites and radiantly intense but narrow specular highlights while exposing the finer details within the brightest spots.

Originally shot on a combination of 35mm, 65mm and digital HD cameras, the upscaled transfer is only marginally sharper than its HD SDR counterpart. There are several moments where the lines and minor imperfections of the buildings are better exposed, the surrounding foliage can be highly detailed and the threading in the clothing is very well-defined. Likewise, facial complexions can be quite revealing, from the smallest wrinkle and pore to the intricate blemishes in the makeup effects of the inmates. On the other hand, a majority of the 4K video falls on the softer side of things with some moments looking poorly resolved and blurry while other instances of very minor aliasing and mild posterization rear their ugly heads.

In the end, though, the UHD is a comparably welcomed step up over the previous Blu-ray, however small those differences may be. (Dolby Vision HDR Video Rating: 74/100)

Scorsese's masterful psychological thriller uncovers the truth with the same DTS-HD MA 5.1 soundtrack enjoyed on the Blu-ray, which is not a bad thing since it remains a thoroughly enjoyable lossless mix that'll have viewers second-guessing their sanity. Littered with lots of background activity, a nicely balanced and expansive soundstage displays a superbly clean and extensive mid-range, exhibiting excellent detailed clarity during the loudest segments while still maintaining amazingly precise, well-prioritized vocals. The design also does splendidly well when applying the receivers' Dolby Surround or DTS: Neural:X up-mixing functionality, effortlessly spreading various atmospherics into the overheads, especially the sounds of water dripping or the wind blowing. The low-end could be a bit more extensive and commanding, but bass nonetheless provides the delusional visuals and haunting music with a sense of presence and a weighty impact.

For a more in-depth take on the audio quality, you can read our review of the standard Blu-ray HERE. (Audio Rating: 92/100)

For this 10th Anniversary UHD SteelBook edition of Shutter Island, the same set of bonus features are ported over from before and only available on the accompanying Blu-ray disc.

Tackling his first psychological thriller, legendary filmmaker Martin Scorsese flexes his pure love of cinema in Shutter Island, showering a gothic neo-noir tale with craftily implied allusions to classic films and other more obligatory filmmaking techniques. Starring Leonardo DiCaprio, Mark Ruffalo, Ben Kingsley and Max Van Sydow, the adaptation brilliantly but very subtly explores deeper questions on the power of film to speak beyond its plot while also serving a thoughtful socio-political commentary. Celebrating its 10th anniversary, the masterful crime mystery arrives on the shores of 4K Ultra HD as a SteelBook edition with a strong, generally satisfying Dolby Vision HDR presentation that provides a comparably small but nonetheless welcomed step up from its Blu-ray predecessor. However, the same DTS-HD MA 5.1 soundtrack and the same set of bonuses have been ported over from that release. In the end, the overall UHD package is recommended for staunch Scorsese fans and cinephiles.

Sale Price 32.95
Buy Now
3rd Party 32.95
In Stock.
See what people are saying about this story or others
See Comments in Forum
Previous Next
Pre-Orders
Tomorrow's latest releases