Starring a phenomenal, Oscar-worthy performance by Joaquin Phoenix, Todd Phillips' Joker is a captivatingly brilliant character study of the infamous, iconic Batman villain, making it one of the best comic book adaptations along with one of the best films of the year. The lunatics invade 4K Ultra HD with a gorgeous Dolby Vision HDR presentation, a highly satisfying Dolby Atmos soundtrack, but a disappointingly set of supplements. Nevertheless, the overall UHD package is Highly Recommended and a must-have for fans of the character.

With so much to marvel at and draw a deeper meaning in Todd Phillips' surprisingly masterful and darkly poignant Joker, the use of stairs arguably provides the most evocative and significant visual. Within the first few minutes, Arthur Fleck (a phenomenal Joaquin Phoenix) is pointlessly beaten to the ground, struggles to be understood by someone who appears to be a court-appointed therapist and made to feel like a creep even after revealing he suffers from a medical condition that causes inappropriate laughter. Right from the start, we are drowning in an atmosphere of misery, poverty and a thick grimy air of hopelessness. We are spectators to a crime-ridden, deeply impoverished Gotham City populated mostly by the disenfranchised, the destitute and demoralized. And who better to personify this pessimistic nihilism than an aspiring comedian living with his ailing mother (Frances Conroy) in a slummy apartment.

Seeing Arthur dejectedly walk up the stairs, hunched forward with the enormity of societal pressures bearing down on him, the struggle to rise up the economic ranks and be recognized as a person is as much a physical strain as it is emotionally exhausting and psychologically taxing. It also serves as a larger metaphor for an audience made to witness the depravity and even empathize with Arthur, who's destiny is already well-known from the start, and it's a distressingly painful walk achieving that goal. Impressively, Phillips is consistent with the appearance of stairs in this origin story to one of the most notorious and iconic comic book villains. The only time Arthur doesn't struggle with the climb is after a shocking shooting of three businessmen in a subway, ironically hinting at his distorted but momentary sense of autonomy, which quickly leads to a disturbingly beautiful dance in a squalid public bathroom. 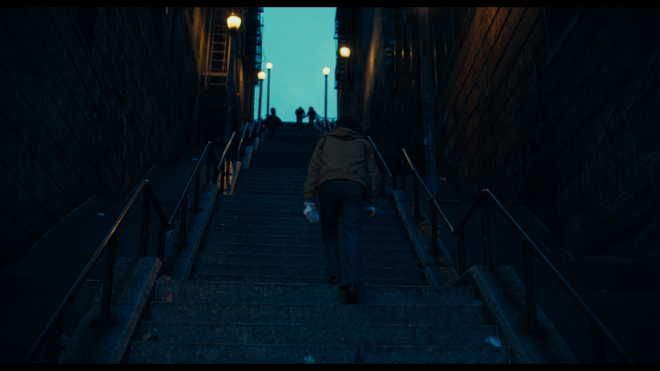 On the other hand, the walk down the stairs is naturally easier while also bafflingly hopeful. Arthur's walk as the fully-realized Joker is met with glee and laughter, standing upright free of society's expectations. Bleak and dark as it may be, that's precisely the joke in an era where a wealthy Reality TV personality can become the leader of a powerful nation but never actually know the struggle because he was born with a silver spoon in his mouth. Thomas Wayne (Brett Cullen) is incapable of understanding the deeper irony in Charlie Chaplin's Modern Times while Murray Franklin (Robert De Niro) jokes about the rat-infested streets of a city he claims to love, and both men view the lower-class as self-pitying, whiny clowns who are at fault for their own situation. This is not the ascension of a criminal mastermind but the paradoxical descent into an accidental sociopolitical symbol, ranking Phillips' Joker as one of the greatest comic book adaptations ever and easily one of the best films of the year.

Warner Home Video brings Todd Phillips' Joker on Ultra HD Blu-ray as a two-disc combo pack with a Digital Copy code. When redeeming said code at WB.com and MoviesAnywhere, users have access to the 4K version in Dolby Vision with Dolby Atmos audio. Housed inside a black, eco-vortex case with a cardboard slipcover, the dual-layered UHD66 disc sits comfortably opposite a Region Free, BD50 copy. At startup, viewers are taken to a generic static screen with the usual options along the bottom and music playing in the background.

The lunatics have taken over the Ultra HD asylum dressed to the heavily-stylized nines and looking surprisingly snazzier than its HD SDR counterpart.

The visually captivating HEVC H.265 encode beautifully and faithfully captures the dark, brooding moodiness intended by director Todd Phillips and cinematographer Lawrence Sher, boasting a slightly more vibrant array of colors throughout. As with the Blu-ray, the distinct orange-teal palette favors earth tones with lots of ambers and warmer yellow hues. However, the Dolby Vision HDR presentation supplies this limited selection with a bit more flamboyance and pomp, be it from the marigold-orange glow of the lights or Arthur's ruby maroon and buttery yellow two-piece suit. The action is also awash in a cerulean cyan sheen, especially when in the streets of Gotham, with bursts of evocative cobalt blues, fuller reds and livelier greens, making for an attractive vision of a man's descent into madness and criminality.

Sher's photography also revels in the improved brightness levels, bathing Arthur's gut-wrenching fall with notably richer, silkier blacks in the hair, clothing and various furniture items. At the same time, inkier shadows penetrate deep into the screen while showing the smallest gradational differences in the darkest corners, providing the 1.85:1 image with a gorgeous velvety gloss and a lovely, three-dimensional cinematic quality. Due to the aesthetic design, contrast balance largely feels limited and somewhat restrained, producing a disturbing somber atmosphere. Nevertheless, the 4K video displays brighter, more brilliant whites in the clothing and various light fixtures. Better yet, specular highlights enjoy a crisper, tighter glow in the brightest spots, revealing the finer details in the overcast skies and in the lights, making random sparks more distinct and supplying metallic surfaces with a more realistic luster.

Shot on a combination of Arri Alexa cameras capable of up to 5K resolution and later mastered to a 4K digital intermediate, the freshly-minted 2160p transfer boasts slightly sharper definition for a majority of the runtime. We can better make out the threading and stitching in the costumes, particularly in the elaborate suits worn by Arthur and Murray. The fine lines in the buildings, busy city streets and the various furniture pieces are also a bit more distinct, and facial complexions appear healthier with a natural peachy rosiness in the cast and lifelike textures, revealing every wrinkle, pore and negligible blemish. However, good chunks of the action can also seem softer than other areas, but such sequences are all intentional as part of a larger effect for recreating a gritty 1970's feel. And there's also the occasional instances of very mild aliasing along the sharpest edges but are easy to ignore.

All things considered, this is a gorgeous and recommended upgrade over the Blu-ray. (Dolby Vision Video Rating: 94/100)

The few action sequences, of course, supply the more noteworthy moments with the subway sequences and the climactic riot being memorable highlights. The room erupts into mayhem with the commotion of electrical pulses, rattling train cars and the uproar of a city in anarchy flawlessly bouncing across the overheads, generating an immersive hemispheric soundfield. Quieter, more character-driven scenes are also layered with the subtle echoes of street traffic, the chatter of the apartment building and other random noises from Arthur's office visits, maintaining an amazing sense of presence.

Meanwhile, the front soundstage is continuously active and busy, teeming with background noise that fluidly and convincingly moves across the screen and into the top heights. The haunting and painfully heartbreaking music of Hildur Guðnadóttir exhibits extraordinary definition and separation in every note with a great deal of warmth and superb fidelity. Amid the pandemonium, vocals are very well-prioritized with crystal-clear clarity and precision, allowing for every inflection and emotional beat in the dialogue to come through with appreciable intelligibility. Furthermore, a powerfully assertive and robust low-end adds a remarkable sense of presence with an imposing weight that digs as low as 20Hz in a few areas, sending couch-shaking, room-energizing bass at serious decibels (bass chart). (Dolby Atmos Audio Rating: 94/100)

The Ultra HD comes with the same disappointingly small set of bonuses as the Blu-ray.

Right from the start, Todd Phillips' Joker drowns the audience in an atmosphere of poverty and hopelessness, made to witness the disturbingly, gut-wrenching misery of Arthur Fleck, an aspiring comedian destined to become the infamous, iconic comic book villain. Starring a phenomenal Joaquin Phoenix in the titular role, the film is less the rise of a criminal mastermind than it is the spiraling descent into a violent counter-cultural symbol. The lunatics take over the 4K Ultra HD asylum with a stunningly beautiful Dolby Vision HDR presentation, delivering an excellent improvement over the Blu-ray, and a highly satisfying Dolby Atmos soundtrack, but the release features a rather disappointingly small assortment of supplements. Nevertheless, the overall UHD package is highly recommended.

Sale Price 20.19
List Price 24.99
Buy Now
3rd Party 9.88
In Stock.
See what people are saying about this story or others
See Comments in Forum
Previous Next
Pre-Orders
Tomorrow's latest releases