After decades in Production Hell, Gemini Man finally arrives on the screen with an impressive turn from Will Smith and under the direction of Oscar-winner Ang Lee in a film that doesn't fully feel worth the massive effort. Featuring a huge budget, state of the art digital technology, and native 4K high frame rate imagery - the exorcise sadly rests on an often dramatically flat but still a somewhat entertaining show. Paramount unleashes Lee's latest visual beast onto 4K UHD Blu-ray presented with an often stunning and gorgeous 60fps HFR with Dolby Vision HDR and an action-packed Dolby Atmos audio mix. This is true demo-worthy A/V but utilized on a film that may not impress. Recommended.

We also Reviewed the Blu-ray HERE

72 confirmed kills. That's the career legacy of Henry Brogan (Will Smith). His last kill was a close-call success. An inch or two off the mark and he would have killed an innocent little girl. When Henry learns his latest target wasn't what he seemed, his DIA bosses aren't pleased with the prospect of their best weapon knowing too much. Gemini project leader Clay Verris (Clive Owen) insists on having Henry iced - ASAP. With help from burned agent Danny (Mary Elizabeth Winstead), Henry has to outwit, outshoot, and outfight his greatest opponent - his own clone. 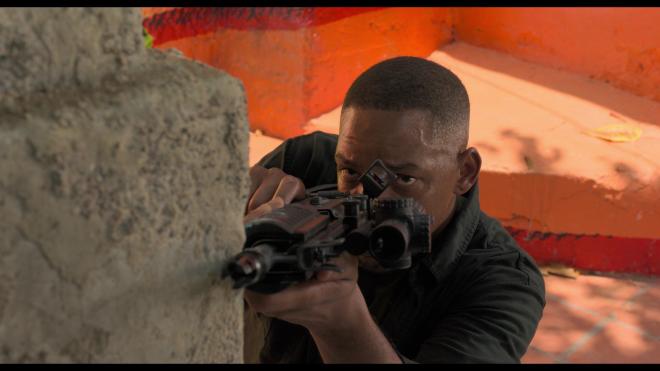 When I first heard of Gemini Man I was actually really excited about the prospect of a resurrection of the Invisible Man inspired 70s TV show starring Ben Murphy and the amazing MST3k episode Riding with Death. Instead, we have a film that is a culmination of decades of Production Hell after numerous actors, directors, and writers signed on and quit the production. If Gemini Man had been made with any other actor or director at the helm at a different time, it would be a fine but disposable piece of action entertainment. With Will Smith playing his current age and younger self with a high-pedigree director like Ang Lee at the helm, you naturally expect something special. Unfortunately, the David Benioff, Billy Ray, and Darren Lemke paint by numbers script doesn't accommodate anything special. Certainly not anything special enough to warrant a massive budget, state of the art technology, on top of being shot at 120fps and in 3D.

I personally don't have anything against HFR films. Outside of the initial adjustment, my eyes settle into the rhythm and I appreciate how stunningly lifelike the imagery can look. Most of Gemini Man is simply drop-dead gorgeous to look at in 4K UHD 60fps with Dolby Vision. There is a true-to-life quality that can often be breathtaking. Billy Lynn's Long Halftime Walk occasionally had that "soap opera" effect whenever anyone moved. Gemini doesn't suffer in natural character movements when people are walking or talking or even some of the grounded action sequences, it looks incredible. However, when action sequences pick up and wild panning camera movements combined with CGI on top of fast-moving fighting digitally created characters, the effect works against what the eye is registering. There are more than a few moments during fight sequences where the human moves and CGI crosses into the land of Uncanny Vally and simply becomes cartoonish. When the camera is static or limits its movements, everything looks incredible. I will give all due credit to Lee for executing the technology in a way that works far and away better than The Hobbit Trilogy pulled off at 48fps.

At the end of the day, you have to ask the question "was it all worth it?" Gemini Man is a flawed but enjoyable movie on its own. The action sequences are intense and Will Smith is acting his ass off - twice! But the rest of the movie is shallow pond stuff. You could nitpick the plot, character motivations to death. With so many different writers attached over the years, it's impossible to know who was responsible for what and/or what if any genuine material was lost in the final cut of the film. If this was just your average piece of counter-programming summer action made on a modest budget - it'd been fine. People might have been more forgiving. But with the pedigree in front and behind the camera and the technology involved, this project should have been something special instead of a slice of average pie made with extraordinary ingredients. Go in for fun, and you should enjoy the ride. If you're demanding original or intelligent plotting and characters, outside of Will Smith you won't get much to chew on.

Holy wow. That alone can pretty much sum up my thoughts about this native 4K 2160p 60fps with Dolby Vision HDR presentation. I really wish I'd been able to see this at 120fps in 3D when it was in theaters now. When Gemini Man is at its best, it's bringing to the screen some of the most vivid and true-to-life hyper-realistic imagery you can expect to see. There are so many glorious moments where you feel like you could reach into the screen be in the same room with these actors. There is a brief adjustment moment with the high frame rate, but I didn't feel like my eyes took as long to adjust as they did with The Hobbit in theaters or Sony's release of Billy Lynn's Long Halftime Walk. The amount of detail is staggering being able to see the smallest fine facial feature to the individual stitches in clothing. As the film was also shot in 3-D, the image always maintains a stunning sense of depth and dimension - especially in slow-motion sequences.

Dolby Vision HDR kicks up the impressive imagery and with the combination of HFR, it easily surpasses the standard 1080p presentation. So on top of lifelike details and images, the lifelike colors explode on the screen. Vivid and rich primaries in addition to natural skin tones plus the added benefits of deep inky black levels and crisp whites create such a beautiful effect. When this film is at its best it's like watching a live-to-air nature documentary.

However, 60fps HFR and Dolby Vision HDR highlight some of the notable CGI flaws of the production. Fast motion weightless CGI is still an obstacle for the tech. 30-minutes into the film there is an incredible single-shot chase sequence where we follow Will Smith on a motorbike dodging cars in narrow alleyways. The scene is a combination of live-action and then CGI composite to "paste" the illusion of a single take. Watching this sequence on the SDR Blu-ray and the 4K UHD Blu-ray was an interesting comparison. The 1080p Blu-ray actually looked fake because of the loss of frame clarity, it looks more like a complete CGI stunt element than a combination. On the flip side, with HFR and Dolby Vision, it makes the transitions from real-life stunt work to CGI much more obvious. This carries over to a Will vs Will fight sequence that is part real actors part fully CGI models. When the real actors are on screen - it looks amazing! When those CGI models step in, woof, it's rough. So you have to decide if you want something that doesn't look convincing all the way through, or an image that is beautifully realistic but only intermittently "cartoon-like?"

Where HFR and Dolby Vision actually helped the CGI was in the aging effects for the younger Will Smith character Junior. Aside from not quite being able to nail the mouth movements naturally - this is one of the first times where I felt like this technique didn't pull me out of the moment. The amount of detail and work to make the younger face look natural is damned impressive. In 1080p without the added detail and resolution for facial features it felt more unnatural and far more uncanny valley to be comfortable with. Especially when both characters are side by side offering the added scrutiny for comparisons - so that's another area where this 4K HFR Dolby Vision presentation easily outpaces the standard Blu-ray. I wouldn't call this flawless, but, anytime I feel the need to show off what 4K UHD Blu-ray can do, I have a new demo disc in a big stack of demo discs to showcase.

Across the platforms, Gemini Man is given an engaging and intense Dolby Atmos audio mix to turn up and blast out your sound system. It's mixed perfectly giving you pinpoint object placement across vertical and surround channels and is a real treat during the action sequences as bullets pop and zip throughout the soundscape! Dialog is on point giving each actor their due without any interference from outside elements. While the dialog keeps to the front and center background audio round out the channels.

Sound effects work to give surrounds a maintained presence while working to build atmospherics. Vertical channels help highlight specific sound effects during the action sequences but during calmer moments they really help open up the scene - the spa location or when Henry and his team are chilling in Hungary are prime examples. Levels are spot on without any softness issues to contend with - although I do recommend cranking the volume up - you'll love it when the big fight sequences kick in! The final gunfight is a beast and makes impressive use of the format. You have a minigun destroying a liquor store with bullets zipping by and glass shattering - it's a delightful cacophony of sound effects!

Gemini Man comes loaded with about an hour of bonus content that is actually genuinely decent informative stuff. The alternate opening is a cool juxtaposition showcasing their assassination abilities. Beyond that, we get what amounts to some typical EPK material with some solid looks behind the scenes in how they pulled off various aspects of the film.

Gemini Man has been in development for so long that Clint Eastwood and Harrison Ford had been attached at one point. Even Nicolas Cage was once cast as the lead - but the tech wasn't ready. Ang Lee and Will Smith partner up utilizing the latest technology to bring audiences an often visually stunning film that sadly lacks depth in the story department offering few surprises. The film is watchable and entertaining but the only thing that makes it special is the tech behind the camera instead of the characters and story on screen.

Paramount delivers a technically incredible 4K UHD Blu-ray of Gemini Man. With a native 4K 60fps transfer with Dolby Vision HDR and Dolby Atmos audio, this film is a sight to see and hear. The vivid hyper-realistic images are almost too much to handle complete with a richly immersive audio mix to pull you into the action. This is absolutely true demo-worthy material - unfortunately the film itself isn't as captivating. Recommended.

Sale Price 19.68
List Price 25.99
Buy Now
3rd Party 6.5
In Stock.
See what people are saying about this story or others
See Comments in Forum
Previous Next
Pre-Orders
Tomorrow's latest releases