In the Tall Grass 4K (Netflix)

In the Tall Grass grows through Netflix from director Vincenzo Natali, adapted from Stephen King and Joe Hill's novella, where two siblings trekking across country stop on the side of the road, where they hear a voice calling for help in a tall grass field. Delighted to help out, both siblings get more than they bargained for when they realize the tall grass is riddled with evil supernatural forces, preventing them from escape. The Dolby Vision and Dolby Atmos track are both top-notch and fully engaging. Highly Recommended! 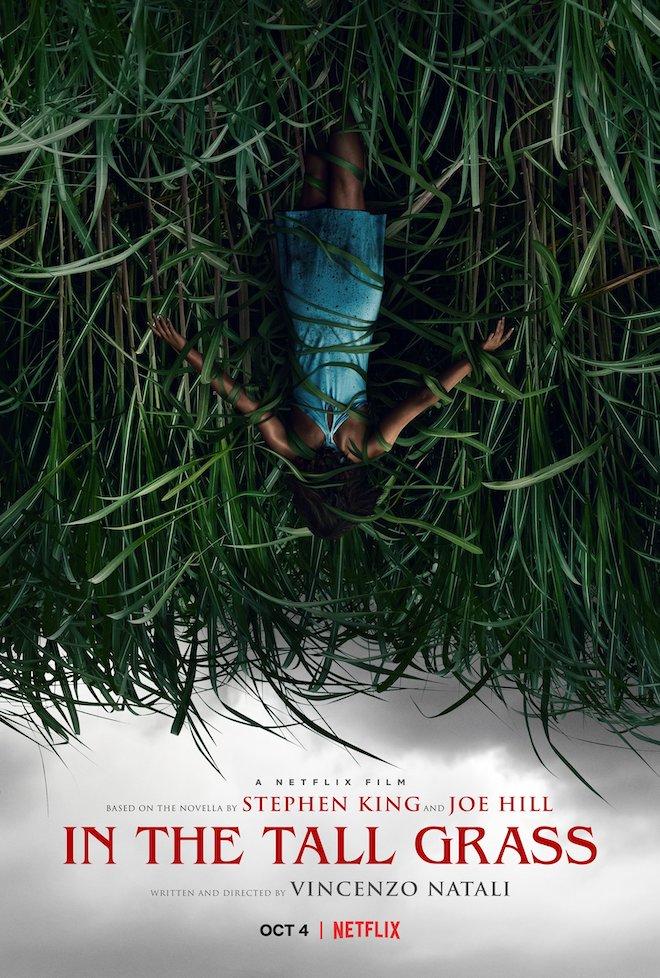 Stephen King has a penchant for terrifying us with the most innocent things. Whether it be a cornfield, a family dog, a classic red car, or even a fancy hotel at a ski-resort, King delivers the scares more than most. The same can be said for his short novella he co-wrote with his son Joe Hill called In the Tall Grass, which takes place in a beautiful and lush field of tall green blades of grass. Director Vincenzo Natali (Cube, Splice) adapts this horrific story for the big screen as he clutches to the overall maniacal themes of this bloody novella, but never takes it to a peak level of savagery as the written words do. In fact, it’s best you separate the source material from the adaptation so you can enjoy each piece of material individually along with their great unique qualities.

Siblings Becky (Laysla De Oliveira) and Cal (Avery Whitted) are road-tripping across the country on their way to California. Becky is about to give birth to a new baby, but the baby’s father Travis (Harrison Gilbertson) is nowhere to be found. The car journey seems to be going well until Becky has her brother Cal pull to the side of the road to get rid of some nasty morning sickness. On one side of the road is an old abandoned church where the other side is an ocean of ripe tall grass. As they get out of the vehicle, they hear a small childâ’s voice calling for help. This voice identifies himself as Tobin (Will Buie Jr.), as he sounds frightened and is looking for a way out. The voice sounds close enough for Cal to step a couple of feet into the tall grass, grab Tobin, and be a hero for a day.

But in this King/Hill universe, nothing is as it seems. Once Cal and Becky are inside the grass maze, voices come from every direction, there doesn’t seem to be a way out, and where one person might be one foot away one second can be a football field away from the next. As it turns out, Tobin isn’t the only person to be stuck in the tall grass either. Tobin’s father Ross (Patrick Wilson) shows up, who helps navigate the greenery surrounding everyone, but as time and space seem to not agree with anything, Ross seems to walk the path of a mad Jack Nicholson in The Shining. Mayhem and bedlam soon both rear their ugly head as Travis shows up where a large, black stone in the center of the field gives way to some sinister exploits.

Whitted, De Oliveria, and Gilbertson all deliver some solid performances of confusion, anger, and horror, but it’s Wilson that shines above all. Whenever the pace seems to slow up, Wilson pops in with an alarming yet brilliant representation of someone who isn’t what they appear to be. Natali’s exquisite direction looks indeed like an ocean of grass that sways back and forth through the wind. In fact, it can play out a lot like JAWS, but on land, where some hapless victims are being terrorized by something vicious. In addition to that, Natali also gives us the beauty inside these blood-thirsty walls, which is visually striking.

If you’ve read the novella, you’ll know it goes to a very dark place. Some might say it is one of the darkest and most evil stories King has written, but Natali doesn’t take this route necessarily. That’s not to mean that the film has its nightmarish moments of malevolent actions, but it never crosses that intense line and instead, goes the opposite direction. It’s a bold choice and I respect it, despite wanting to see the violent horrors come alive in this production.

When all said and done, In the Tall Grass has a lot of things going for it, including a very capable director who conveys the allure of hell confined within an overgrown yard, some good acting, and some truly disturbing images that will be sure to stick with you. The only thing I'll forever wonder is how great this could have been if Natali went all the way as the novella did.

Netflix introduces the new film In the Tall Grass with Dolby Vision / HDR10 and a Dolby Atmos track with compatible displays and audio systems. 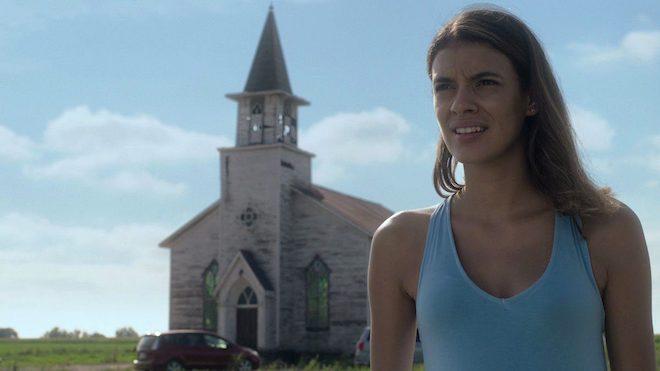 Netflix lays down In the Tall Grass, holstering a Dolby Vision / HDR10 transfer that brings two gorgeous color palettes to life. The detail also supplies a rich amount of texture in the haunted vegetation that surrounds the actors in each scene.

On one hand, the horror film takes place on a beautiful, sunny day with clear blue skies and the golden sun pushing those amber rays down onto the luscious field of giant blades of green grass. The Dolby Vision enhances the variety of green in each blade of grass as it sways in the wind from side to side. It's almost like a soothing ocean of turf that looks good enough to eat. This mixes well with the brown dirt and the primary colored wardrobe the actors wear. Being a Stephen King story and all, there is a bit of blood, which has an excellent red tone to it every time it's splattered across the screen. But more or less, the earthy colors shine in that glorious Dolby Vision that brings every shade and tint to life-like quality. The other hand shows a darker setting after the sun goes down where blackness covers the sky and the green grass grows more sinister with dusky greens. Black levels are jet black during the night time sequences and never bleed out or come across as murky.

In both spectrums, the detail delivers rich textures and facial features both in closeups and wider shots. Closeups showcase the intense makeup effects of decaying people, dead bodies and their decomposition, along with facial lines, wrinkles, and individual hairs. All of these features are easily seen in both well-lit and dark situations. The blades of grass themselves reveal their distinct surface, as they filmed a lot of the film on location in real grass. The old wooden church also has the necessary wood rot and wilted paint that looks creepy in each shot.

This Dolby Vision / HDR10 looks gorgeous and is free of any encoding issues throughout. 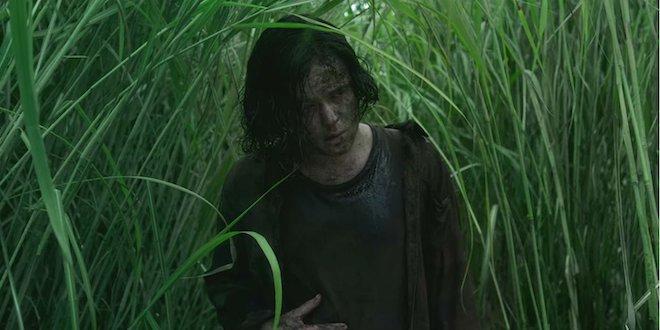 In the Tall Grass delights in its own Dolby Atmos track that features a ton of remarkable atmospherics, big sound effects, memorable musical cues, and clean dialogue.

The atmospherics in this film is wildly entertaining. From all speakers, you'll hear voices at different distances, birds, haunting noises, and more. Even the swaying of the tall grass brushing up against each other is well-balanced. Due to the terrifying nature of the film, you'll hear human voices one second right next to you, but the next second, the same voice is many yards away on the other side of the room. Needless to say, the directionality of the dialogue and sound effects are highly impressive. Footsteps in the dirt, a dog barking, and more are all turned up to give that suspenseful aurora. Height speakers chime in with otherworldly voices in a few spots as well as some tall grass bumping into one another during windy moments. It was quite immersive. The score always delivers crashing crescendos with jump scares and provides an eerie motif throughout that keeps you on edge. Dialogue is always clearly rendered throughout.

This Dolby Atmos track doesn't always have a deep low end of the bass, but during some of the heavier action-beats where the music turns up, you'll hear a nice rumble. Lastly, there were no audio problems with this track and will thrill you to your core. 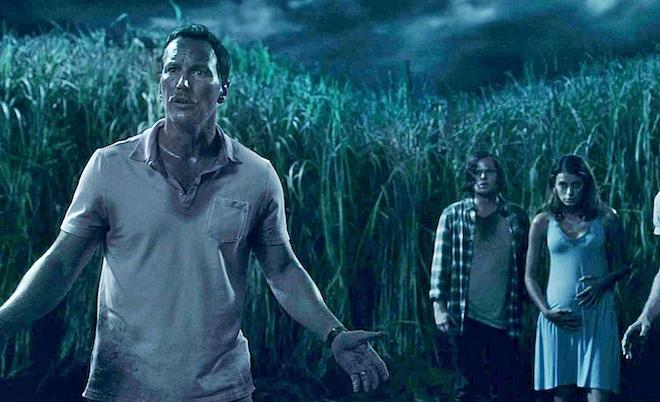 Only a trailer is available at the moment. 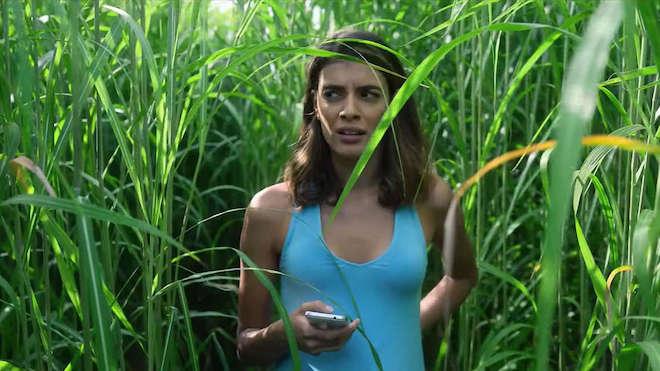 In the Tall Grass is a different take on Stephen King and Joe Hill's novella of the same name. The adaptation goes to new places and discovers new themes you thought this horrific story could never have, but Natali conveys the roots of the book well, which should offer plenty of scares. Those of you with the big-ticket Netflix plan, the Dolby Vision / HDR10 image looks stunning in each scene, along with a fantastic Dolby Atmos track that provides an engrossing experience. Highly Recommended!