Starring a terrifically memorable Brad Pitt, James Gray's Ad Astra is a layered, pensive meditation communicating deeper truths of our inherent desire to explore the universe wrapped in gorgeously spectacular visuals. The sci-fi drama lands on 4K Ultra HD with a beautiful HDR10 presentation, an outstanding Dolby Atmos soundtrack but the same set of supplements as the Blu-ray. Still, the overall UHD package is recommended.

James Gray's Ad Astra is the science-fiction drama Christopher Nolan's Interstellar could have been, should have been and even strived to be had its theme not been so heavy-handed or hampered by a maudlin, hackneyed conclusion. Granted, this journey, which Gray co-wrote with Ethan Gross, of traveling into the farthest reaches of space is just as much about the awe-inspiring visual spectacle of our universe as Nolan's 2014 blockbuster. In fact, the plot is driven by similar motivations having to do with Earth's eventual demise. Only, Gray's moving meditation on humanity's innately passionate but near-obsessive yearning to explore the unknown is more analogous to a Stanley Kubrick or Andrei Tarkovsky production, and ofttimes, it's very much in the spirit of those greats. And that yearning is continuously buoyed by a deep-rooted melancholy that mostly goes neglected or simply disregarded as a hindrance or a flaw to the larger mission, perhaps exposing a vulnerability to the focused goal.

Brad Pitt delivers arguably one of his best and perhaps most memorable performances of the decade as the stoically reserved Major Roy McBride. And in one of many remarkable aspects of this extraordinary production, demonstrating Gray's talent behind the camera, McBride's entire life slowly and visually unfurls through the course of two hours, gradually chipping away at a man whose heart rate never rises above 80 bpm even while under duress. Although his ability to compartmentalize his emotions clearly affect his immediate world and strained his marriage with Liv Tyler, the military regards the Major's skill as a useful benefit when informed his father (Tommy Lee Jones), a legendary and highly celebrated astronaut, is the origin in a series of catastrophic power surges. Assigned to establish communication with his father, McBride's voyage steadily reveals the deep scars causing the end of the world. 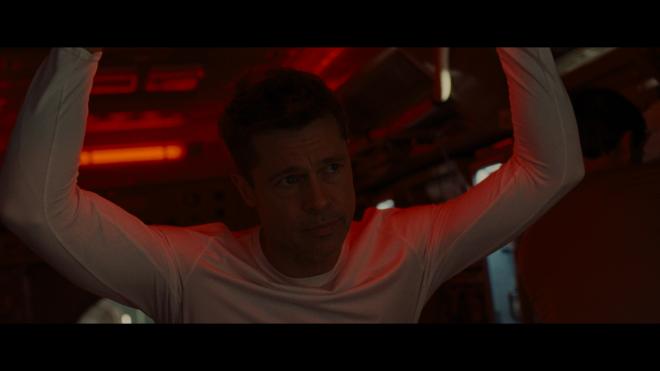 At once, the trek to the edge of our solar system is a personal pilgrimage for Pitt's seemingly anchored and dedicated soldier, one where he must confront the pains of his past in order to move forward. And Gray does an elegantly beautiful job in using the journey to Neptune and the end of the world as a metaphor for allowing the character the patience to grasp the importance of being better in touch with his emotions, that vulnerability is not a weakness. At the same time, the story speaks to a deeper truth about the irony of our inherent desire to explore the stars when as a people, we can't better scrutinize ourselves and recognize our flaws, especially those we're fated to repeat on the moon. It's a paradox that it's easier to probe everything outside ourselves than what's inside. And the film's title — per aspera ad astra ("through hardships to the stars") — poetically captures what's at heart in Gray's film.

20th Century Fox Home Entertainment brings Ad Astra to Ultra HD Blu-ray as a two-disc combo pack with a flyer for a Digital Copy, which can be redeemed via FoxDigitalMovies.com or Movies Anywhere, unlocking the 4K HDR10 version with Dolby Digital Plus 5.1 audio. The dual-layered UHD66 disc sits comfortably opposite a Region Free, BD50 disc inside a black, eco-cutout keepcase. At startup, the UHD goes straight to the main menu screen with full-motion clips, the usual options along the bottom and music playing in the background.

The sci-fi drama reaches for the Ultra HD stars and pushes slightly further than its fellow Blu-ray cosmonaut, fueled by a beautiful and sometimes splendid HEVC H.265 encode. It may not be a leaps and bounds jump over the HD version, but the upgrade is nonetheless appreciable to make this a winner, showing a welcomed uptick in overall definition.

Shot on traditional 35mm film mixed with some digital footage but later mastered to a 4K digital intermediate, the freshly-minted 2160p transfer better exposes the threading of the astronaut suits and the small gadgets attached. We can plainly make out every button, wire and device inside the shuttle while the small bolts, rivets and latches in the exterior shots are more distinct. The individual whiskers in Pitt's faint stubble are a tad sharper, and the facial complexions of the entire cast better reveal the pores, wrinkles and negligible blemishes with lifelike textures. True to the source and the filmmakers' creative intent, the picture comes with several soft, blurry moments sprinkled throughout, but interestingly not as blatant or stand out as on the Blu-ray. Awash in a dense, noticeable layer of natural gain, the picture is very film-like and ultimately, quite lovely to behold.

Again, faithful to the artistic choices of director James Gray and cinematographer Hoyte van Hoytema, the 4K video displays a considerably subdued contrast and brightness balance that reflects the central character's solemnly personal journey. This makes for an intentionally flat image with black levels that range from dark charcoal grays during poorly-lit interiors to rich, silky shadows in other areas, such as the Moon. Along with this small boost, scenes in space are also improved, looking significantly inkier and more luxurious while the stars twinkle brilliantly sharp in the distance, providing a few demo-worthy segments. In fact, whites are dramatically cleaner and crisper, providing the 2.39:1 image with a good deal of pop both inside and outside the shuttle sequences. Also, specular highlights radiate with more intensity but a tighter glow, such as in the aforementioned stars, the buttons and the many lights while also furnishing various metallic surfaces with a glistening, realistic shine.

The heavily-stylized cinematography also greatly affects the color gamut, but the HDR10 presentation faithfully handles the filmmakers' aesthetic choices with aplomb. The palette notably favors a neutral earth-tone scheme, bathing the emotional conversations with deep tans, tawny browns, soft ambers and warm yellows. Some scenes glow in a canary golden sheen and electrifyingly animated cyans. When rockets are either blasting off or landing, the screen lights up with an array of deep fiery oranges and dynamic marigolds. Primaries don't benefit much from the jump into UHD, at first glance, and remain relatively similar to its HD SDR counterpart. Nevertheless, the reds in various outfits, the console buttons and in few bits of blood are strikingly fuller and more spirited while flesh tones appear healthier with a rosier, peachier tone in the entire cast. (Video Rating: 84/100)

The epic journey lands to home theaters with a marvelously engaging and enthralling Dolby Atmos soundtrack that's every bit the equal of its DTS-HD counterpart.

Similar to the video, the jump may not offer a significant upgrade, but imaging remains continuously broad and spacious, providing the gorgeous visuals with an unexpected sense of scope and expanse. Various background effects subtly and discretely travel across the screen with convincing movement into the off-screen space and the top heights, creating a wide and welcoming half-dome soundstage. Max Richter's low-key but haunting score also enjoys a great deal of warmth and fidelity in the orchestration, exhibiting extraordinary acoustical detailing in the mid-range. All the while, the conversations are always crystal-clear and precise at all times, even when chaos erupts. The low-end provides room-energizing, rumbling shockwaves through the room during shuttle launches and the few bits of action, digging into the ultra-low depths well-below the 20Hz range on a few occasions (bass chart).

Despite being a front-heavy presentation, the surrounds are periodically employed with amusing effectiveness but reserved for those moments where the on-screen action would expectedly demand it, nicely expanding and widening the soundfield. The most common use would be Major McBride's voiceover thoughts extending into the overheads, filling the entire room with his pensive ruminations while also hovering right over the listener. The few action sequences come with debris from rocket blasts raining down from above, and the clanking, chiming and various other electronic noises from inside the shuttle reverberate through the sides and rears while also lightly echoing in the ceiling. (Dolby Atmos Audio Rating: 90/100)

Only the audio commentary is shared with the Ultra HD while the accompanying Blu-ray disc carries the rest of the bonus features.

Telling the story of an astronaut's journey to Neptune in order to reunite with his estranged father becomes a metaphor for communicating deeper wounds in James Gray's Ad Astra. Starring a terrifically memorable Brad Pitt, the pensive meditation also speaks to deeper truths while displaying gorgeously spectacular visuals. The sci-fi drama lands on Ultra HD with a beautiful 4K HDR10 presentation that offers a welcomed step-up over the Blu-ray but the Dolby Atmos soundtrack is relatively similar to its DTS-HD MA counterpart. Featuring the same set of supplements as the BD, the overall UHD package is recommended for hard-nosed sci-fi fans and the curious.

Sale Price 13.99
List Price 19.99
Buy Now
3rd Party 9.99
In Stock.
See what people are saying about this story or others
See Comments in Forum
Previous Next
Pre-Orders
Tomorrow's latest releases