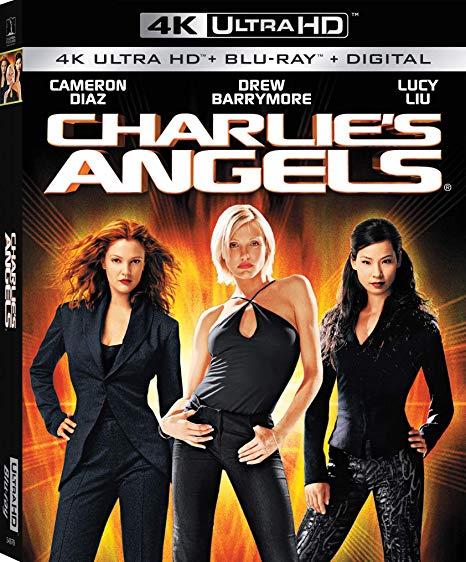 Two decades later, it somewhat surprises me McG's Charlie's Angels remains just as silly, self-aware comedic fun as always. The action-packed silliness, of course, has not aged well in the least. In fact, with the cherry-picked selection of electro-pop hits breathing life into the over-the-top visuals and the unabashedly cartoonishly stunts, the movie is very much trapped in the 90s, a hilariously weird time-capsule of what was considered cool and hip at the time. Added to that is McG, making his directorial debut, attempting the Jerry Bruckheimer-Micheal Bay formula but ultimately feels like an unintended caricature. And somehow, the whole badly-aged fiasco has grown into the film's charm. With Drew Barrymore, Cameron Diaz, Lucy Liu and Bill Murray further supplying a goofy, tongue-in-cheek sense of humor, this spin-off continuation of the popular 70s television crime drama is pure fun escapism that still invites audiences to just sit back with a tub of popcorn and enjoy the spectacularly explosive fun. 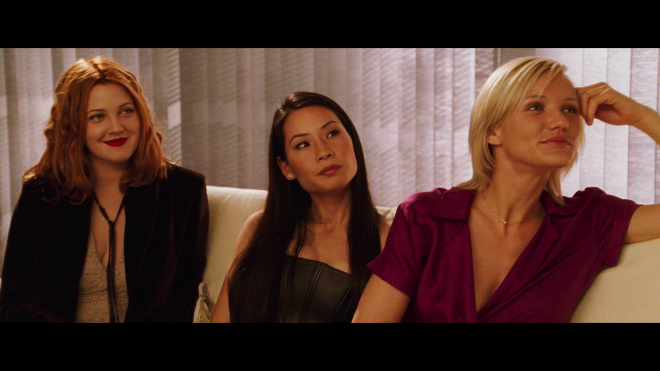 For a more in-depth take on the movie, you can read Aaron Peck's review of the 2010 Blu-ray HERE.

Sony Pictures Home Entertainment brings McG's Charlie's Angels (2000) to Ultra HD Blu-ray as a two-disc combo pack with a flyer for a Digital Copy, which can be redeemed via sonypictures.com and Movies Anywhere. When redeeming said code, users have access to the 4K Dolby Vision version with Dolby Atmos audio. The dual-layered UHD66 disc sits comfortably opposite a Region Free, BD50 disc inside a black, eco-elite vortex case with a glossy slipcover. At startup, the disc goes straight to an interactive main menu that changes screens when switching between the usual options while music plays in the background. 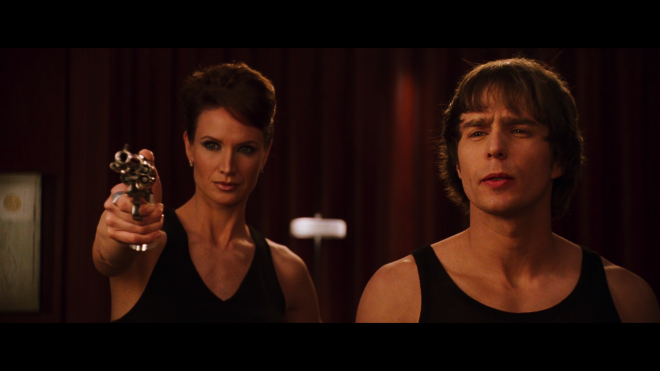 The Angels are called back into action outfitted with a strappingly handsome HEVC H.265 encode, flaunting a welcomed uptick in overall definition and clarity compared to its Blu-ray predecessor. Struck from a brand-new 4K remaster of the 35mm OCN, the fresh 2160p transfer displays slightly sharper details and fine lines for a good chunk of the runtime, especially around the hair and the threading in clothing. However, the picture quality isn't always consistent with many sequences looking less than satisfactory, poorly-resolved and noticeably blurry, but this is easily excused to the condition of the original elements and an inherent result of the photography. Nevertheless, awash with a fine layer of natural grain throughout, the 4K video comes with a beautiful, film-like quality that fans will appreciate.

Also, contrast and brightness provide another noteworthy improvement, especially the inky rich blacks in every scene, from the various tight outfits and clothing to the tires and interior of the many vehicles while showering the 2.39:1 image with velvety shadows. Whites are a bit more energetic and vividly crisp though there several instances of blooming that tend to wash over the finer details, but specular highlights supply a dazzling radiance to the action, explosions and various metallic surfaces. But the best aspect of this HDR10 presentation is the brighter, glowing colors, particularly the reds boasting a wider range from the candy rose strip of the Camaro and clothing to the cherry ruby of makeup. Although blues and greens likewise enjoy a notable boost, it's the fiery oranges and warm yellows that are arguably the most dramatic, making the orange-teal cinematography really pop with energy and making this UHD edition a great-looking upgrade. (Video Rating: 78/100) 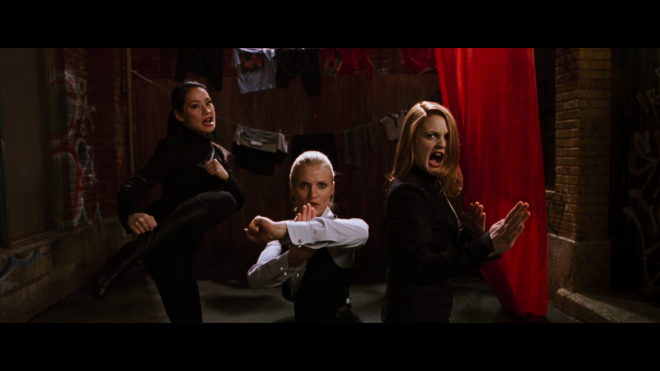 The Angels punish evildoers to hell with a rocking, amusingly satisfying Dolby Atmos soundtrack that'll make its DTS-HD counterpart feel somewhat wanting. A selection of cool and hip songs that terribly make the movie feel dated perform most of the leg work, filling the room and surrounding the listener with late-90s techno hits. Those same electro sounds also bleed and echo across the overhead channels, creating a laughably enthusiastic but nonetheless highly-engaging hemispheric soundfield that effortlessly sucks viewers into the absurdly over-the-top action. Occasionally, other ambient effects employ the surrounds as well, but they are not quite as effective or convincing while the space above remains relatively silent until the music kicks back in.

More impressive is the constant noise and activity in the background flowing and fluidly moving between the three front channels, creating an appreciably broad and spacious soundstage. Although it's never pushed too far into the higher frequencies, imaging nonetheless exhibits crisp clarity and warmth in the mid-range and during the loudest, ear-piercing segments. Meanwhile, the low-end could arguably be a bit more powerful and pronounced, but it still does well at providing an energetic heft and weight to the visuals. Amid all the chaos and silly mayhem, vocals remain crystal-clear and very well-prioritized, making this object-based mix a welcomed step-up over its lossless predecessor. (Dolby Atmos Audio Rating: 84/100) 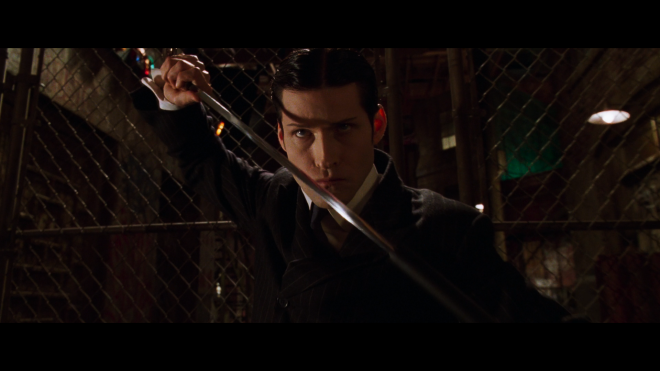 Aside from a promo piece for Elizabeth Banks' reboot sequel on the Ultra HD disc, making it exclusive to the UHD package, the same set of bonus material is ported over from the previous Blu-ray release but only available on the accompanying Blu-ray disc. 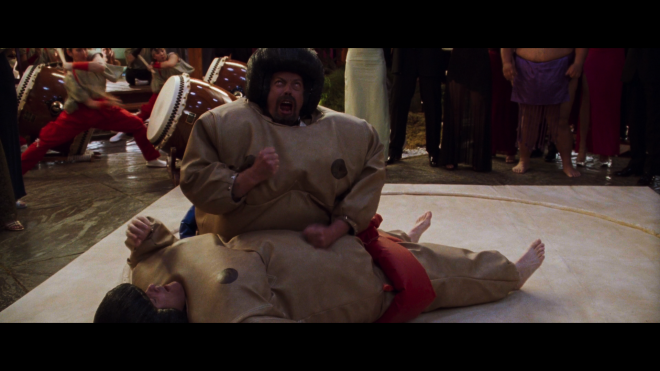 Twenty years later, McG's Charlie's Angels remains a surprisingly entertaining and goofy reboot continuation of the original classic TV series, littered with plenty of visual delights, laughs and an amusingly silly plot. Starring Cameron Diaz, Drew Barrymore, Lucy Liu and Bill Murray, the self-aware action-comedy may be trapped in the 90s, but the production makes for an amazingly entertaining and more fun film than the latest installment. The Angels land on Ultra HD with a great-looking 4K HDR10 presentation and an excellent Dolby Atmos soundtrack, offering fans a notable improvement over its Blu-ray predecessor. Although the same set of supplements are ported over, the overall UHD package is nonetheless recommended for 90s action fans everywhere.