Ruben Fleischer's Zombieland celebrates its 10th Anniversary with the same hilariously fun, post-apocalyptic thrills and genre-bending smarts. The cult comedy runs to Ultra HD with a good-looking 4K HDR10 video and an overall satisfying Dolby Atmos track. The package is Recommended for the small upgrades and new supplements exclusive to this UHD edition.

In 2009, filmmaker Ruben Fleischer made his directorial debut with Zombieland and since then, hasn't really done anything of note. However, fans of Venom would probably beg to differ. In either case, the zombie comedy starring Woody Harrelson, Jesse Eisenberg, Emma Stone and Abigail Breslin remains easily Fleisher's strongest and finest work. His first feature-length film is equal parts smarts and zany, cartoonish hilarity, just as much a spoof on horror tropes as it is a clever satire that borrows heavily from the western genre.

The script by Rhett Reese and Paul Wernick (a partnership that also gave us two Deadpool movies) is essentially a reimagining of John Ford's 1939 classic Stagecoach, and the clashing personalities must learn to work together to survive zombies instead of Native people. They are also traveling west in a modern-day stagecoach towards a metaphorical El Dorado, a mythical place of richness, freedom and where they may begin anew. If the names weren't enough of a dead giveaway or the desecration of kitschy, mass-produced imitations of Native culture, the awesomeness of Zombieland is that it's also an ingenious zombie western flick. 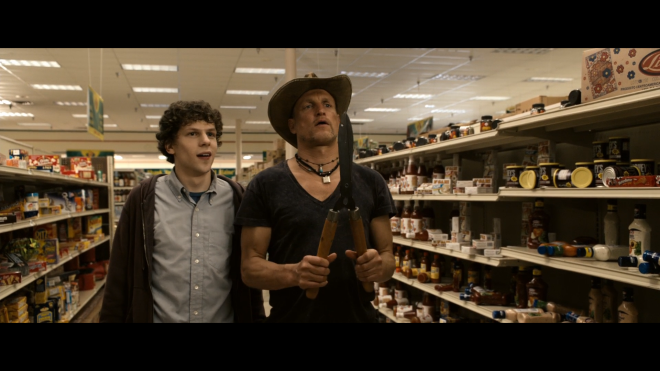 Sony Pictures Home Entertainment brings Zombieland to Ultra HD Blu-ray as a two-disc combo pack with a flyer for a Digital Copy, which can be redeemed via sonypictures.com and Movies Anywhere. When redeeming said code, users have access to the 4K Dolby Vision version with Dolby Digital Plus 5.1 audio. The dual-layered UHD66 disc sits comfortably opposite a Region Free, BD50 disc inside a black, eco-elite vortex case with a glossy slipcover. At startup, the disc goes straight to an interactive main menu that changes screens when switching between the usual options while music plays in the background.

Thank goodness for the cardio warm-ups because the zombie apocalypse sprints towards Ultra HD with a good-looking if also somewhat mildly disappointing HEVC H.265 encode. The movie was originally shot on a combination of traditional 35mm stock and full HD cameras, and those elements were later mastered to a 2K digital intermediate, which, by all appearances, is from where this 2160p picture was likely sourced. Still, the upscaled transfer shows a slightly sharper overall definition with excellent visibility in the streets, various buildings and in Bill Murray's ornately decorated mansion. It's not a night-and-day difference, but fine lines and objects are a bit more distinct from a distance. The stitching and detailing of the clothes is better, and facial complexions are revealing. However, resolution dips slightly in a few areas, and there is evidence of minor aliasing here and there.

Contrast is in a similar boat but also rather wonky and unstable, looking strong and well-balanced in several scenes and daylight exteriors. But it can run fairly hot in other areas, creating a tad of trivial posterization, ruining some of the resolution quality and making a couple sequences appear mildly overcooked. Such instances are likely related to the limitations of its original HD source and not the fault of the encode. At its best, however, whites are more vivid and cleaner. Specular highlights don't deliver a significant upgrade, but they provide the 4K video with crisper, a tad more intense luminosity in the light fixtures, the edge of clouds and a realistic polish on metallic surfaces. Black levels offer the better, more noteworthy improvement, bathing the 2.39:1 image with truer, richer shadows. However, the overall picture is also noticeably darker than the Blu-ray, and sometimes, we lose some of the finer details to the darkest, murkiest corners.

On the plus side, the colors enjoy a welcomed boost even though the difference from its HD SDR counterpart is rather small. The HDR10 presentation comes with deeper, fuller reds, as would be expected in a horror-comedy. The slaughter and bloodshed splatter the screen in dark ruby droplets, the gore runs rivers of scarlet blood and the hungry mouths of zombie drip cherry crimson saliva, yet the amusement park is lit in candy reds and animated rosy shades. Greens and blues, on the other hand, remain about the same as the HD version. Secondary hues display a small uptick and slightly more variation, as the orange-and-teal palette becomes a bit more prominent, bathing most scenes in warmer, fiery oranges and marigold yellows. Also, flesh tones are peachier with a more natural rosiness, which is very much welcomed and makes for an otherwise nice step-up over the Blu-ray. (HDR10 Video Rating: 74/100)

Celebrating ten years of the undead making us laugh, the cult comedy double taps home theaters with a cracking and overall enjoyable Dolby Atmos soundtrack. Compared to its DTS-HD Master Audio 5.1 brethren, this new object-based track may not offer a major upgrade or rank high on the zombie-killer of the month list, but it handles itself well and makes for a fun time at the amusement park.

Atmospherics travel and pan between the sides and rear on several occasions, generating an effectively amusing soundfield, but the ceiling speakers are relatively silent for a majority of the runtime. From time to time, some random effects might bleed above the listening area, but such instances are far and few in between. The amusement park is, of course, the track's strongest sequence with the carnival rides very lightly swinging through the overheads or zombies swarming around Tallahassee's last stand. In the end, it's not enough to ever create a convincing soundscape that's any ever better than what's heard on the Blu-ray.

Outside of those climactic moments, much of the mix remains the lossless counterpart's equal with lots of background activity spread evenly across the front soundstage. Imaging feels broad and spacious as gun blasts, zombie grunts and screams move between the channels smoothly and lightly into the top heights. The mid-range exhibits outstanding clarity and separation into the higher frequencies, and the score enjoys plenty of warmth and fidelity. Dialogue reproduction is distinct, precise and well-prioritized from beginning to end, and a throaty, occasionally powerful low-end provides a weighty presence to the action and music. (Dolby Atmos Audio Rating: 82/100)

One new exclusive joins a pair of familiar featurettes on Ultra HD while the accompanying Blu-ray disc is identical to the 2010 release containing the same supplemental material.

Ten years later, Ruben Fleischer's Zombieland remains a hilariously fun thrill ride, like a post-apocalyptic amusement park frequented by a horde of fast, sprinting zombies. The horror-comedy is at once a clever spoof on familiar tropes, but it's also an ingenious satire of the western genre that delivers on the laughs along with the suspense. The cult comedy runs to Ultra HD with a good if also mildly disappointing 4K HDR10 video and an overall excellent Dolby Atmos soundtrack, offering a small step up over its Blu-ray counterpart but not by a huge margin. Still, the package is recommended for the small improvements and a trio of new supplements that are exclusive to this UHD edition.

Sale Price 19.99
List Price 30.99
Buy Now
3rd Party 12.99
In Stock.
See what people are saying about this story or others
See Comments in Forum
Previous Next
Pre-Orders
Tomorrow's latest releases