In their first solo outing, Ruben Fleischer and company reimagine archvillain Venom and his host Eddie Brock as an anti-hero vigilante in Venom (2018), but the end result is a sadly uninspiring and tone-deaf spectacle barely saved by the dazzling visuals and Tom Hardy's performance. Spider-Man's greatest and most formidable nemesis plays host on Ultra HD with an excellent Dolby Vision HDR presentation, a fantastic Dolby Atmos soundtrack and the same supplements as the Blu-ray. The overall UHD package is nonetheless Recommended.

Zombieland director Ruben Fleischer pulls off a stunning miracle in Venom (2018), and I'm not only talking about the comic-book villain achieving shocking box-office success. No, I'm referring to Fleischer making a superhero movie that's on par, if not worse, than Sam Raimi's Spider-Man 3, and arguably one of the most average Marvel flicks of recent memory. That's right! For me, Venom (2018) ranks alongside the likes of Daredevil, Fantastic Four: Rise of the Silver Surfer, X-Men: The Last Stand and the ridiculous X-Men Origins: Wolverine. Heck, even Howard the Duck musters some silly, entertaining fun with its badness, but Fleischer's vision of Spider-Man's formidable nemesis is a rather boisterously chaotic mess that only looks pretty on the surface. Like those aforementioned pedestrian efforts, the production is visually captivating and all spectacle, just enough to dazzle the senses while mesmerizing long-time fans with a live-action adaptation that ironically feels faithful to the comics.

However, for his first solo feature-length debut, the alien symbiote crash lands on Earth with a pretty banal and uninspired plot riddled with a series of clichéd archetypes, failing to really engage the audience in any meaningful way. Admittedly, Tom Hardy continues to be a pleasure to watch on screen, as he has been since Mad Max: Fury Road, and he makes the most of his time as investigative journalist Eddie Brock, naturally emanating a dark, brooding charisma as if he were taking a breath. This is perfect for a character whose life rapidly spirals to rock bottom and whose confident egotism suddenly changes to a twitchy, apprehensive and helpless cynic with signs of a raging fury slowly boiling underneath. His headbanging next-door neighbor interrupting his attempts to meditate is one particular moment of comedic annoyance while another scene of him witnessing a robbery from behind an aisle shows Brock as weak — or as Venom later calls him: a loser. 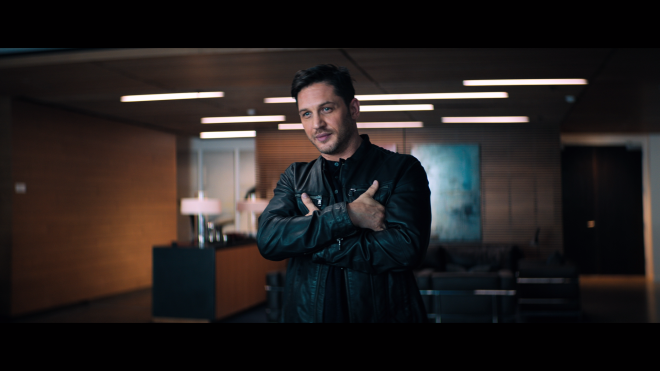 This is all well and good when establishing our protagonist's evolution into vigilante anti-heroism, which started after a confrontational interview with the powerful inventor and owner of the Life Foundation, Carlton Drake (Riz Ahmed). But Brock is made to endure a series of humiliating defeats as though the filmmakers were relishing in kicking him to the ground. The stunt already caused a ripple effect that destroyed his life while also being dumped by his ex-fiancée Anne (Michelle Williams), and Fleischer continues to punish his hero for a while longer before finally uniting with the symbiote known as Venom. The first half of the movie digs itself into such a gloomy pessimistic hole, that it's difficult for Fleischer and his team to pull the film out, creating a weirdly internal battle between a serious dark comedy and various horror elements trapped in a story possibly about redemption or discovering the hero within. In either case, the movie left me feeling cold and indifferent, rather than satisfied.

Ultimately, the plot feels as though lazily assembled to justify the visuals — to give an excuse for a nighttime car chase through the streets of San Francisco with exploding drones without explaining their purpose. And the same thing can be said of Drake's questionably nefarious ambitions, which are somehow suddenly consumed by Riot's goal. And granted, the CG spectacle in Venom (2018) is certainly eye-popping sensational, serving as the production's greatest strength and selling point, along with Tom Hardy's performance. But without a stronger story and characters we genuinely care about — Drake is the archetypal corporate criminal we're meant to hiss and boo, and Anne's role is not entirely clear — all the action and CG wizardry feel like empty spectacle, failing to be the white-knuckle excitement the filmmakers were aspiring for. In the end, as a fan of the character since he was first introduced to the Marvel Universe, Venom (2018) is an odd mix of mildly-entertaining and dull.

Sony Pictures Home Entertainment brings Venom (2018) to Ultra HD Blu-ray as a two-disc combo pack with a flyer for a Digital Copy, which can be redeemed via sonypictures.com and MoviesAnywhere. When redeeming said code, users have access to the 4K Dolby Vision version with Dolby Atmos audio. The dual-layered UHD66 disc sits comfortably opposite a Region Free, BD50 disc, and both are housed inside a black, eco-elite vortex case with a glossy slipcover. At startup, the disc goes straight to an interactive main menu that changes screens when switching between the usual options while music plays in the background.

Eddie Brock and Venom join forces to play host on Ultra HD with a horrifyingly excellent and occasionally spectacular HEVC H.265 encode, offering a few notable improvements over the Blu-ray though it's not the leaps and bounds upgrade we'd prefer.

The production was shot on a trio of digital cameras with resolution levels ranging between 3K and 8K, and since the CG effects were rendered in 2K, it's more than likely the elements were later mastered to a 2K digital intermediate. Every so often, there is evidence of mild but unmistakable aliasing along the sharpest edges, such as long shots of bridges or the roofs of buildings, and some near-negligible moiré patterns on the side of brick walls. Nevertheless, the upscaled 2160p picture enjoys a nice uptick in overall definition, showing slightly sharper details in the clothes, buildings and the sterilized labs of the Life Foundation. Facial complexions are highly revealing, and viewers can plainly make out the individual veins and creases on Venom's slimy membrane body. Notwithstanding, there are a few moments of minor softness here and there, especially during the fast-paced action sequences, but they appear inherent to the original photography and the CGI.

Regardless, the freshly-minted 4K transfer's best qualities come by way of markedly improved brightness levels, which were a small point of concern on the Blu-ray. Here, however, blacks are more consistent and balanced, bathing the streets of San Francisco with luxuriously rich shadows and the many interior shots with stronger, midnight shades. Brock's leather jacket is a deep onyx black while Venom is a strange silky charcoal, and the best shots are of the city's skyline at night, providing the 2.40:1 image with a few near-reference cinematic moments. Likewise, contrast also receives a nice boost, brightening much of the action with crisper, more dazzling whites. The many light fixtures and neon-signs have a slightly more intense, dazzling glow. However, specular highlights don't show much of a difference from the HD version. In fact, some of the brightest and hottest spots, such as the drone's blue explosions, tend to bloom and engulf some of the finer details.

Be that as it may, owners will sooner forgive those aforementioned artifacts to better appreciate the slightly wider assortment of colors throughout. Although much of the movie takes place at night and tends to fall on the darker side of things, Matthew Libatique's cinematography nonetheless comes with a healthy splattering of rich, vibrant primaries. The Dolby Vision HDR presentation displays sumptuous candy rose reds in the alarms and police sirens while blood is of a deeper crimson tint, and blues electrify the screen with animated cobalt shades and an exotic arctic cerulean during drone explosions. The nighttime action sequences, once again, are the photography's highlight as the neon lights of the city pop with radiant flashes of bubblegum fuchsias, vibrant violets and flamboyant canary yellows, the last of which seem to warmly wash over the car chase. In the end, while it may not compare to some of the best UHD releases, Venom nonetheless provides a welcomed upgrade over its HD SDR counterpart. (Video Rating: 84/100)

The villain turned vigilante snivels and grumbles his way to heroism with an outstanding Dolby Atmos soundtrack that shockingly delivers a better aural experience than its DTS-HD counterpart.

My biggest area of concern with the Blu-ray is the noticeable sporadic use of the surrounds, which is surprising for a modern superhero blockbuster, but this object-based track considerably corrects that by taking better advantage of the entire soundscape. Granted, there are still big chunks of silence throughout, but action sequences make up for them more than enough. Debris from explosions scatter in every direction more effectively, bullets smoothly whizz by and ricochet on either side, and the massive climactic battle provides an awesome sense of envelopment and presence. The ceiling speakers are occasionally given a healthy workout as well with Ludwig Göransson's score lightly bleeding all around along with other minor ambient effects. This is especially true during the opening moments after the crash where the echo of sirens circles the listening area and helicopters flawlessly pan overhead, effectively creating an immersive hemispheric soundfield that while not always consistent, is satisfying nonetheless.

Leaving the house convulsing and trembling after a series of ear-splitting symbiote warfare is a commanding, wall-rattling low-end, providing each explosion, punch and some gunfire with striking impact and force. There are even several instances of bass digging into the sub-30Hz territory with some strong decibels, and a couple sequences push as low as 17Hz with a weighty wallop (bass chart). At the same time, the story is continuously kept busy with tons of background activity convincingly moving into the off-screen space and the top height channels, generating a spaciously broad half-dome soundstage. Imaging displays room-penetrating clarity and detailing during the loudest, ear-piercing moments, exhibiting superb distinction and separation in the mid-range, allowing every crunch of metal and plop during the symbiote fights to be perfectly heard. All the while, vocals are precise and crystal-clear with outstanding intonation for appreciating Hardy's performance. (Audio Rating: 92/100)

A trivia track and sneak peek of the upcoming Spider-Man: Into the Spider-Verse are shared between the UHD and the BD.

Best known as Spider-Man's greatest and most formidable nemesis, archvillain Venom and his host Eddie Brock make their first solo outing in Ruben Fleischer's Venom (2018) where he is reimagined for moviegoers as anti-hero vigilante. Despite featuring a fantastic performance by Tom Hardy, the movie is ultimately uninspiring with a yawn-inducing first half that sadly leaves audiences moderately engaged for the remainder, making the large-scale, CG spectacle fall flat and somewhat uneventful. Nevertheless, the comic-book baddie plays host on Ultra HD with an excellent Dolby Vision HDR presentation that improves on its Blu-ray counterpart and a fantastic Dolby Atmos soundtrack that's also better than the DTS-HD MA version. Featuring the same set of supplements as the Blu-ray, the overall UHD package is nonetheless recommended for the curious and those wanting more HDR goodness.

Sale Price 16.99
List Price 30.99
Buy Now
3rd Party 11.99
In Stock.
See what people are saying about this story or others
See Comments in Forum
Previous Next
Pre-Orders
Tomorrow's latest releases