Finding Nemo just keeps swimming on home video with a brand spanking new 4K UHD Blu-ray release! This 2003 classic is just as charming and heartfelt as ever - and can now be introduced to an entirely new generation of first-time viewers! This fishy flick is bright, colorful, and makes a nice leap onto UHD with a colorful 4K UHD HDR10 presentation and a solid Atmos audio mix. No new bonus features, but the original bonus disc is included giving you everything you've ever had. If you're a fan and looking for an upgrade, this is a solid investment. Recommended.

"Fish are friends, not food!"

Marlin (Albert Brooks) is an overly cautious clownfish trying to raise his on Nemo (Alexander Gould) after the death of his wife. The reef is a big action-packed place and Nimo is ready to get to school and experience the world - even if that means defying his dad. After getting fish-napped by an Australian dentist, Marlin must travel the world to save his son. Thankfully, he's got help from the forgetful Dory (Ellen DeGeneres) to remind him life's an adventure and everything will work out! 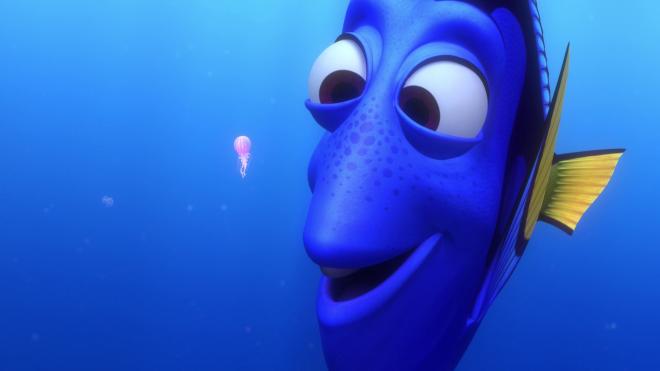 The back-to-back runs of Monsters Inc. and Finding Nemo were the one-two punch of animation joy that forever sold me on Pixar. I was past watching kids flicks when Toy Story and Toy Story 2 hit theaters and at the time I just didn't have a ton of love for Bugs Live - although I've come to enjoy that one quite a bit. Those three films were fine and entertaining but Monsters Inc. and Finding Nemo were the movies that proved to me that Pixar could really go above and beyond with their storytelling and animation.

Finding Nemo holds a special place because my family's pretty obsessed with snorkeling. When I was 9-years-old my parents got a partial win on a lotto ticket so they spent the small winnings on a big trip to the Cayman Islands. While I was excited, I had just seen Jaws so yeah… sharks. One day we were out on the water and I saw a nurse shark paying close attention to me. It wasn't big and they don't care for humans - but I didn't know that. It was scary! While I was keeping an eye on the beast that I was sure was going to eat me, I swam right into some jellyfish. My right leg took the brunt of it and the pain was unlike anything I felt before or since. In that moment, I was sure that shark decided to make me lunch. So now every time I watch Finding Nemo and they get to that jellyfish scene, the phantom pains return and I think of the horrible welt that scarred my leg for years.

Even with the horrible experience of the jellyfish, I got to see an incredible array of sea creatures so watching Nemo is like jumping back into that big blue ocean and looking at all the critters again. With the great voice cast and the clever writing and directing by Andrew Stanton and Lee Unkrich, Nemo never gets old. In the 16 years since it was released the film is just as entertaining. It'd been a while since I last earnestly turned this movie on and watched it. Once that Thomas Newman score swells and the titles come up - I just start smiling and don't stop. It's a grand adventure movie with humor and excitement in spades.

Finding Nemo touches the butt on 4K with a three-disc 4K UHD + Blu-ray + Digital set. The discs are housed in a black two-disc case with the 4K disc stacked on top of the Bonus Features disc and identical slipcover artwork. The disc loads to Disney's standard language menu before moving onto the submenu that lets you skip directly to the main feature or move onto an animated main menu with traditional navigation options.

Note: I've been reading in some posts on Facebook and forums online that some folks' 4K discs are coming out of the cases scratched from having been stacked. Mine was fine but double-check before popping them in your player. 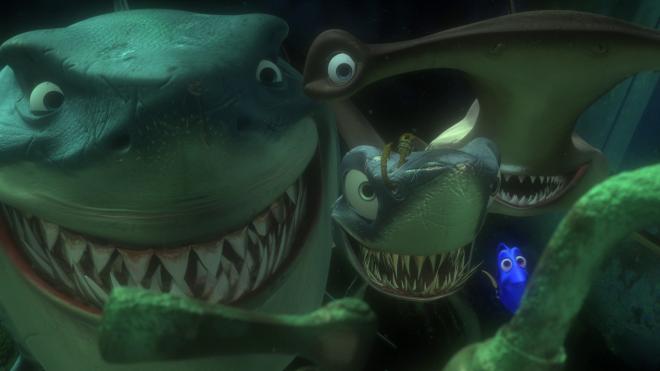 Finding Nemo makes for a pleasing 2160p 1.78:1 HDR10 presentation. Similarly to Ratatouille, there isn't a huge leap in detail levels from the SDR Blu-ray to this 4K presentation but there are some nice enhancements to enjoy. The big look-all that stood out to me were refined textures in the coral reef and the shimmering lighting on the fish scales. While this effect was present in the standard Blu-ray I felt like the underwater lighting effects and the texturing of the critters came through much clearer. When the film moves above water and Geoffrey Rush's Nigel is hanging around the rusty docks or on little rock islands next to the annoying seagulls, I also felt like the rust patterning was a bit cleaner.

To that end, colors also gain some subtle enhancements with HDR10. That light glow that comes off the fish and underwater objects don't quite feel as thick as before with a much more natural shimmering quality. The white stripes of Nemo and Marlin's stripes also pop beautifully and likewise, the dentist's smock shines nicely. There is a lot of primary pop here and, with a wide range of colors, everything looks fantastic. Black levels are also nicely enhanced giving some great shadow variance and shading. The Sharks' submarine meeting place is a particular highlight as is when Dory and Marlin swim from the black depths of the ocean back into the light, the shading subtleties is much more gradual from black to grey to green and then blue.

Personally I still favor the 3D Blu-ray as my favorite presentation - that current vortex with the sea turtles is just so damn cool! But that said, if you're not rocking out on 3D anymore, this 2D 4K UHD Blu-ray with HDR10 is a fine upgrade. It may not be a night and day difference, but the enhancements are enough to qualify as a solid purchase. 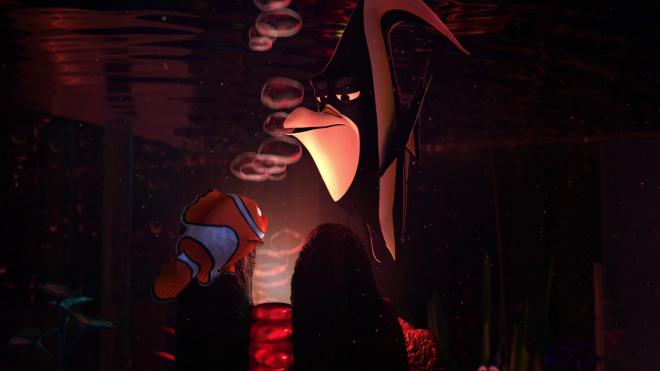 Finding Nemo already came packed with a damned impressive Dolby TrueHD 7.1 audio mix for both of its previous releases - so was an Atmos mix necessary? Probably not - it's good stuff but the leap in overall quality isn't like what we've seen with some of the other Disney and Pixar releases - but still effective and immersive. One of the things I love about this mix is that oceanic sound of low swirling movement like a gust of wind but thicker. It's always present in any underwater scenes (so 90% of the movie), and I felt that effect was a bit more prominent moving around the soundscape and popping in the overheads here and there. Another great overhead effect was the water filter in the fish tank. That low overhead hum with gurgling water was again subtle but a nice fun piece of work. Bigger action beats like when the sea mine blows up or the current tube shoot with the turtles was a great punch.

Akin to Ratatouille, the center channels do most of the heavy lifting for dialogue or primary sound effects allowing the sides and rears to carry the settings and atmospherics. The ocean scenes especially sound dense and expansive and only narrow when necessary. The Jellyfish sequence while triggering painful memories was a fun bit as the stinging zapping sounds zipped around the soundscape. All around this is a solid Atmos mix. Levels were on point without any need of excessive boosting. But that said, if Disney had recycled the older Dolby TrueHD 7.1 track, I doubt many would complain as that was already a perfectly great audio mix. 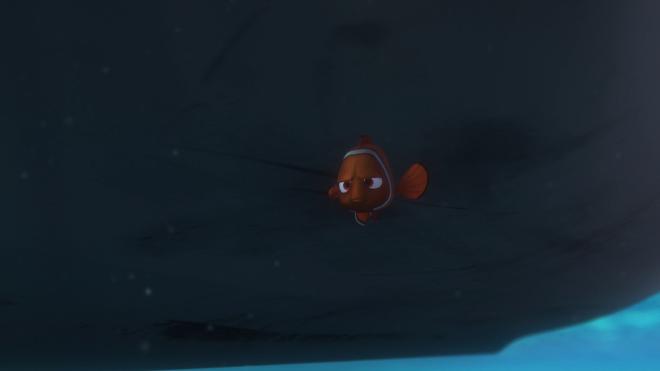 With the previous standard 2D disc and Bonus disc included, you're getting all of the original extras without anything new stirred into the pot. It's a fun assortment of material to be sure, but if you've already gone through most of it already, there's nothing too exciting here worth revisiting. 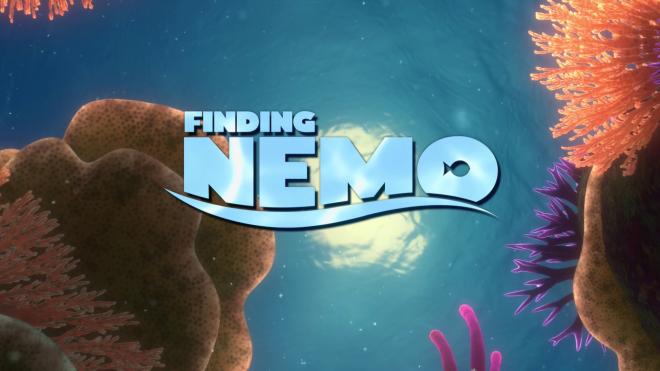 For how many times I've seen this film, I'd have thought that one would get tired of Nemo being found, but 4K UHD Blu-ray proves me wrong. It's a damn infectious film that has a big heart, lots of clever comedy, with tons of fun to be had. For my money, I could watch an entire flick about Bruce the shark trying to break into the movies (hint, hint Disney!). Sure Finding Dory doesn't quite live up to this one - but then Nemo set a pretty high bar. It's still a classic.

Finding Nemo slips onto 4K UHD Blu-ray with an overall enhanced new presentation. The added resolution bandwidth gives this upscaled 2160p some small breathing room in details, but the HDR10 pass helps highlight the color depth and accent colors beautifully. While the Atmos mix may not be the most dramatic improvement over an already impressive audio track, it still rocks out nicely and all channels fire in all the right places. It's hard to imagine anyone not already owning this one, but if you're a fan and it's on your list - you should be damn happy with the 4K UHD. Recommended.

Sale Price 13.33
List Price 39.99
Buy Now
3rd Party 13.33
In Stock.
See what people are saying about this story or others
See Comments in Forum
Previous Next
Pre-Orders
Tomorrow's latest releases