Shane Black's Iron Man 3 concludes the trilogy with visually spectacular action and a poignant, character-driven plot allowing Robert Downey Jr. to really flex his dramatic chops. The thrilling conclusion upgrades to 4K Ultra HD Blu-ray with a lovely HDR10 presentation and an excellent Dolby Atmos soundtrack,  but the same bonus material as before. Recommended for MCU fans and 4K enthusiasts.

I was not entirely satisfied with the third installment in the Iron Man series the first time I watched it in the early summer of 2013. Like many comic book fans, a major part of the excitement in watching the action blockbuster — other than seeing Robert Downey Jr. behave like a pompous, witty smart-aleck, of course — was seeing our heavy metal hero go toe-to-toe against one of his greatest foes, the infamous terrorist Mandarin (Ben Kingsley). To the surprise of everyone, he is not the character from the comics, which was greeted with mixed reactions. I was sort of in the middle but leaning a bit more towards unhappy. However, over time and after some reflection, I've slowly changed my position, much of which is due to being a fan of the director, Shane Black. His sarcastic wit and signature style is evident throughout the film, most notably setting the story he co-wrote with Drew Pearce around the Christmas holidays. Revisiting the second sequel with a more open mind, I can now say I rather like and better appreciate Iron Man 3.

First, I must admit enjoying Black and Pearce repeating the same formula as the sequel. The events of the movie before this one — the first Avengers — had lasting psychological effects upon Stark. And as he did in Iron Man 2, his stubbornly proud and arrogant personality prevents him from seeking the proper help, asking those closest to him for support or even admitting he has a problem in the first place, which in turn puts a strain on his relationship with others or puts them in harm's way. Again, the metal suit becomes a metaphor for concealing the pain he's suffering, hiding any hint of vulnerability behind a cold, hard, emotionless mask. Part of this new false-face personality of Stark is also acknowledging the demons of his past, not the ghosts created by his father but those he personally shaped, such as Maya Hansen (Rebecca Hall) and Aldrich Killian (Guy Pearce). This is where the role of the Mandarin becomes significant and more telling than I initially gave it credit for. He is another false face, a stereotypical "Other" that feeds into our collective fears and turns out to be false. After giving it a second chance, I'm happy with Iron Man 3. 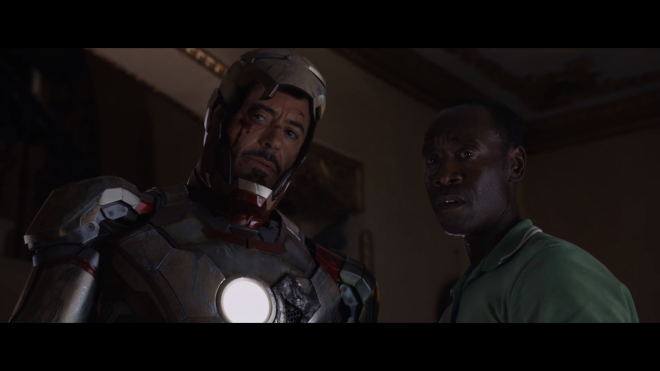 For a more in-depth take on the film, check out Michael S. Palmer's review of the 2013 Blu-ray HERE.

Paramount Home Entertainment and Marvel Studios bring Iron Man 3 to Ultra HD Blu-ray as a two-disc combo pack with a flyer for a Digital Copy. When redeeming said code via RedeemDigitalMovie.com or MoviesAnywhere, owners unlock the 4K UHD digital version in Dolby Vision HDR and Dolby Atmos audio. The dual-layered UHD66 disc sits comfortably opposite a Region Free, BD50 disc that's identical to the previous Blu-ray. Both discs are housed inside a black, eco-vortex case with an embossed, glossy slipcover. At startup, viewers are taken directly to a menu screen with full-motion clips and music playing in the background. 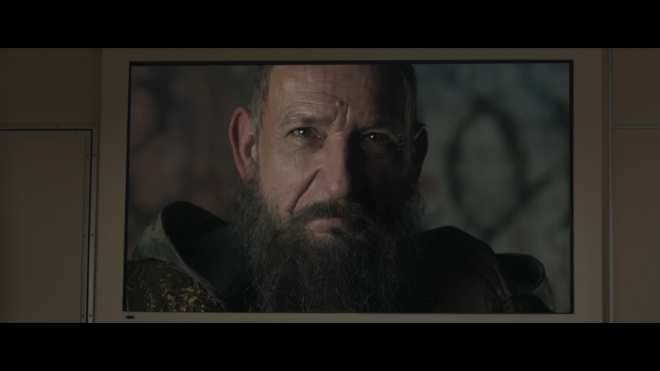 Iron Man 3 suits up with an excellent and largely satisfying HEVC H.265 encode that delivers a great step-up over the Blu-ray. It's not leaps and bounds superior, but this 2160p transfer, upscaled from a 2K digital intermediate, shows slightly sharper definition, exposing the minute battle scars and scratches in the Iron Man suit. We can make out the smallest trinket and gadget lying about Stark's garage along with the minor imperfections, cracks and tiny pieces of debris when his house is attacked. The fine threading in the clothing, especially is Killian's suit jackets and Rhodey's Fred Perry shirts, are very well-defined. Admittedly, there are a couple of soft sections here and there, but they're mostly related to the CG visuals, which nonetheless hold up nicely.

Compared to the other two movies, the 4K video is noticeably darker and slightly blander in a few spots, but regardless, contrast displays a welcomed bump overall. It just falls on the lower end of the grayscale, giving the plot a somewhat grayish and overcast appeal — a distinctive Shane Black neo-noir characteristic. Still, whites are notably cleaner and more brilliant, supplying the action with a spirited pop. Specular highlights enjoy an attractive boost, as the brightest spots glow with a dynamic brilliance while light reflects off metal surfaces with a realistic glare, and the Extremis soldiers radiate with a fiery intensity. Meanwhile, black levels are continuously deep and rich, showing great gradational differences and strong shadow details, providing the 2.39:1 image with a lovely cinematic quality.

Similar to the contrast, the overall palette doesn't show a major jump, which is likely to the creative intentions of the filmmakers, but this HDR10 presentation nonetheless displays a fuller, more vigorous array of colors throughout. Granted, the difference over its HD SDR counterpart is even more nuanced and subtle than the previous two movies, but John Toll's photography shows a deeper scarlet shade in the blood, a ruby rose tone in the Iron Man suit and a sparkling candy cherry in the Christmas lights. Of course, the orange-and-teal color scheme is also made more apparent, if not also more dramatic in some sequences, making Stark's reactors emanate a mix of an electrifying blues and cyans while the Extremis soldiers light the screen with a fiery, lava tangerine and a striking, lemony-yellow center. (HDR10 Video Rating: 80/100) 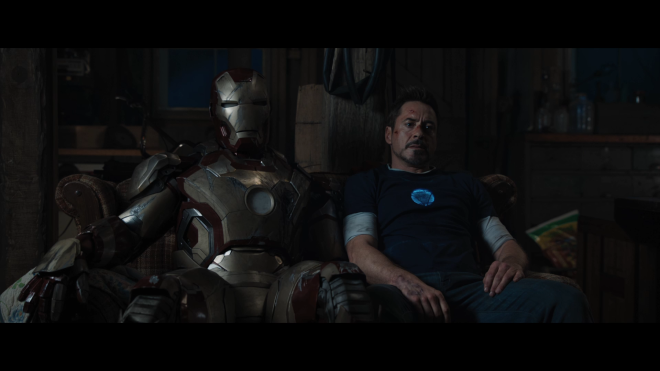 Like the previous two movies, the second sequel flies into action with an awesome Dolby Atmos soundtrack sure to thrill home theaters. Admittedly, it's not quite the same massive upgrade over its DTS-HD MA 7.1 counterpart as heard in the first two movies, but it nonetheless delivers a few noteworthy enhancements that add to the on-screen visuals.

Imaging feels spacious and welcoming, littered with convincing off-screen activity and fluid movement between the front channels and into the top heights, creating a highly engaging half-dome wall of sound. When the story intensifies, the mid-range exhibits superb clarity, showcasing every crunch, rattle, and clunk of metal smashing into metal. Amid the ear-piercing mayhem, vocals remain intelligible and distinct. The low-end is not authoritative or demanding as I would like, especially given the spectacular climactic battle, but it's powerful nonetheless with some wall-rattling, palpable presence while the Air Force One sequence is best for an unexpected, room-energizing rumble.

The thunderous design employs the sides and rears often with various atmospherics surrounding the listening area, along with light bleeding from the musical score. This is most appreciated during quieter character-driven scenes, such as the Stark and Rhodey at the restaurant or Stark's nightmare. For long stretches of time, the ceiling channels are pretty silent, laying dormant and reserved for the eye-dazzling moments. So, when action sequences erupt, helicopters fly overhead, or Iron Man parts zooms across the air and debris scatters in every direction. Still, the object-based mix never truly generates or maintains a convincing soundfield. The only effective moments are the aforementioned Air Force One scene and the explosive Iron Man legion finale, which are fantastic enough to warrant praise and high marks. (Dolby Atmos Audio Rating: 88/100) 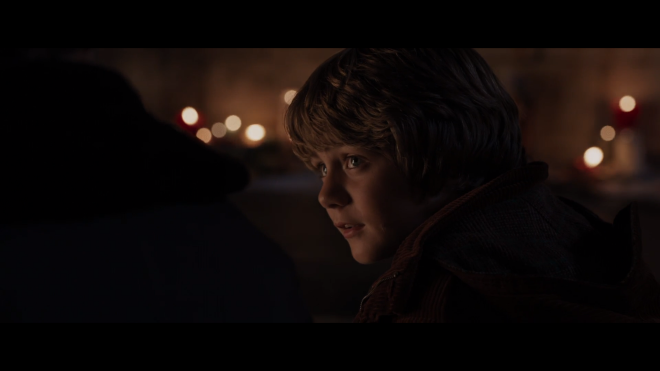 Owners will find the same set of supplements as before on the accompanying Blu-ray disc. 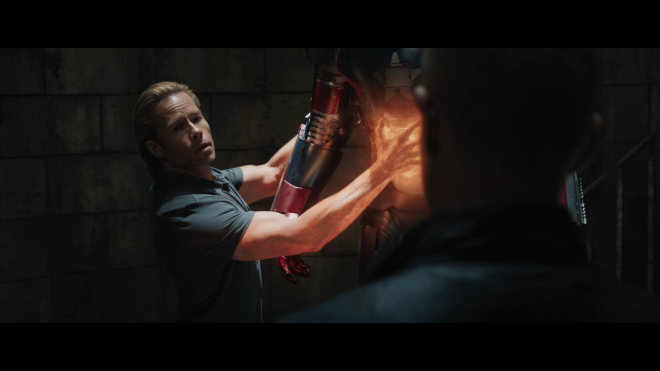 Co-written and directed by Shane Black, Iron Man 3 probably remains as divisive today as it did when it initially released in theaters. Over time, however, I have come to appreciate this installment for its character-driven plot that adds depth to the evolution and journey of Tony Stark and his alter-ego Iron Man. And with Black at the helm, this second sequel is quite entertaining and visually spectacular with another excellent Robert Downey Jr. performance.

The thrilling conclusion to the trilogy upgrades to 4K Ultra HD Blu-ray and suits up with a lovely HDR10 presentation and an excellent Dolby Atmos soundtrack, delivering a nice improvement over its Blu-ray counterpart. Although the same set of supplements are ported over for this UHD edition, the overall package is a Recommended addition to the MCU library.

Sale Price 19.05
List Price 39.99
Buy Now
3rd Party 17.98
In Stock.
See what people are saying about this story or others
See Comments in Forum
Previous Next
Pre-Orders
Tomorrow's latest releases