One of the better aspects of Iron Man 2 is screenwriter Justin Theroux following many of the same themes explored in the first movie, a story that feels like a logical aftermath of previous events. On the surface, Tony Stark is enjoying his newfound fame, clearly loving the public attention, feeding into a massive ego that can't be contained by the metallic suit that protects his overly confident exterior. Meanwhile, the U.S. Government wants the technology for a military weapons program, but this wisecracking, vainglorious narcissist wishes to maintain his superhero status, to keep the spotlight on his accomplishments. But behind closed doors, the billionaire genius is quietly struggling his mortality, wrestling with the fact that the very technology that makes him the star of the world is also slowly killing him. At the same time, his pride and vanity stop him from asking for help from those closest to him, specifically James Rhodes (Don Cheadle) and Pepper Potts (Gwyneth Paltrow), leading to one becoming War Machine and the other CEO of Stark Industries.

Without Robert Downey Jr. as Stark, the character and his behavior would likely be annoying or frustrating to watch. But Downey does splendidly in portraying the comic book hero as a lonely, pathetic man just now grasping that all the money in the world can't buy him everything he needs for happiness. Although it's never said outright, we can feel Stark seeking his father's approval after all these years while the realization of his mortality proves it improbable. It largely explains his erratic behavior like the Monaco Historic Grand Prix or the birthday party disaster. At the same time, our hero struggles with stepping outside of his father's shadow and accomplishments, which sadly fashioned dangerous villains, such as Ivan Vanko (Mickey Rourke), and shaped treacherous competitors like Justin Hammer (Sam Rockwell). Unlike so many action sequels that simply repeat its predecessor, only bigger and louder, Iron Man 2 smartly springboards from the events of the first movie and focuses on the repercussions. 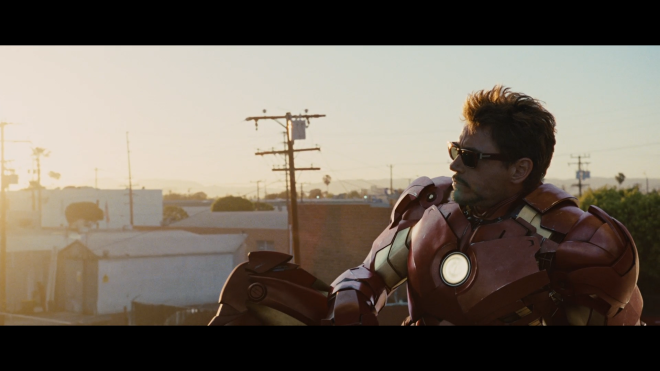 Paramount Home Entertainment and Marvel Studios bring Iron Man 2 to Ultra HD Blu-ray as a two-disc combo pack with a flyer for a Digital Copy. When redeeming said code via RedeemDigitalMovie.com or MoviesAnywhere, owners unlock the 4K UHD digital version in Dolby Vision HDR and Dolby Atmos audio. The dual-layered UHD66 disc sits comfortably opposite a Region Free, BD50 disc that's identical to the previous Blu-ray. Both discs are housed inside a black, eco-vortex case with an embossed, glossy slipcover. At startup, viewers are taken directly to a menu screen with full-motion clips and music playing in the background. 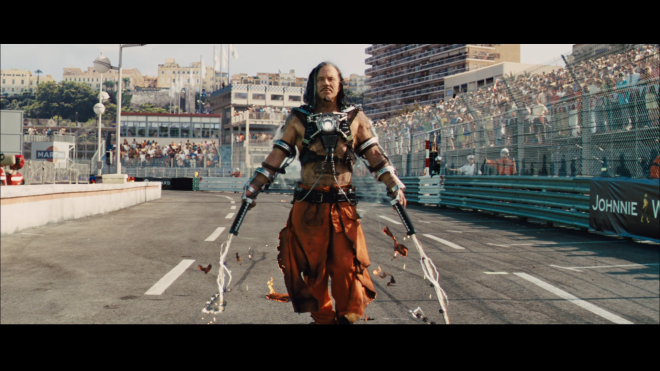 Tony Stark battles the ghosts of his family's legacy on 4K Ultra HD Blu-ray with a great-looking HEVC H.265 encode, displaying a mix of notable enhancements along with a few moments that are comparable to its Blu-ray predecessor.

Coming from a 2K digital intermediate, the upscaled transfer shows stronger definition and clarity on the whole, exposing a bit more of the minute features in the Iron Man, War Machine and Whiplash suits. The fine lines in those outfits and clothing, buildings and city streets, and in the various vehicles are a tad sharper and better detailed, and facial complexions reveal individual pores, the smallest wrinkle, and negligible blemish. However, there are also several instances of soft, blurry moments, mostly related to the CG visuals and in many wide shots. Some very mild aliasing can be seen along the sharpest edges or in the holograms, and a few scenes show a small drop in resolution quality, which is most apparent during the Monaco Grand Prix sequence and Stark's initial fight against Whiplash.

Contrast shows a welcomed improvement, as well, although it's not a massive difference from its HD brethren. Nevertheless, the 4K video is slightly brighter with crisper, more brilliant whites, as seen in the airport hanger with Justin Hammer or inside the Hammer Industries building. The better upgrade is the specular highlights, supplying the explosive action with a tighter and more resplendent glow, a realistic glistening polish on metallic surfaces and tight, radiant sparkle in Whiplash's whips. Likewise, black levels are inkier and truer, providing the 2.35:1 image with a lovely cinematic appeal. On the whole, details within the darkest shadows are strong, but there are a few moments when the blackest blacks and corners can engulf the finer aspects. It may not be terribly egregious, but they're noticeable enough to mention.

The most appreciable upgrade in this HDR10 presentation is the richer, fuller color palette. Matthew Libatique's cinematography benefits from more sumptuous primaries, especially the crimson and cherry reds of the Iron Man suit and the vibrant, electrifying blues in Whiplash's outfit or when Stark synthesizes a new element. Also, secondary hues show better variation with nuanced differences between similar colors, such as Natasha Romanoff's hair looking a dark reddish-fiery orange at the start but a deep scarlet ruby when donning her Black Widow costume. The expo sequences are also bathed in a dramatic array of cobalt blues, rich magentas, soft pinks, and warm canary yellows, and skin tones appear rosier and more true-to-life while making Ivan Vanko seem tanner than before. (HDR10 Video Rating: 78/100) 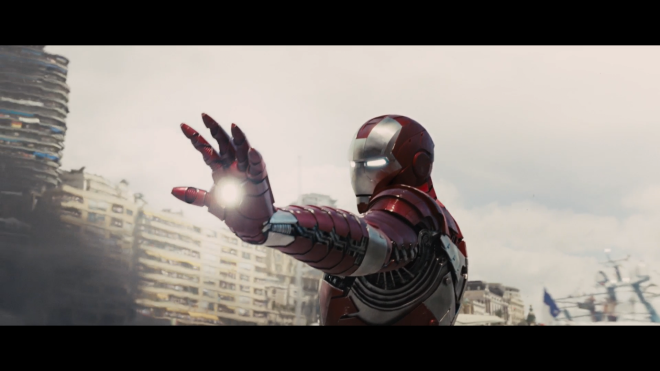 The better leap forward in this Ultra HD edition of Iron Man 2 comes by way of a magnificent, engaging Dolby Atmos soundtrack, delivering a massively entertaining improvement over its DTS-HD MA 5.1 counterpart.

The design is littered with a variety of noises occupying the sides and rears through much of the runtime, establishing an enveloping soundscape with the cheers of crowds, city traffic or the rocking song selections bleeding all around. Some of that activity convincingly flows and echoes into the ceiling channels, creating an awesome sense of space, and even during more dialogue-driven sequences, that spatial quality remains with very subtle ambient effects. Of course, when the action erupts on screen, this object-based mix delivers demo-worthy goods. If it's not Stark taking to the sky, zooming flawlessly overhead or race cars flying through the air, then it's the climactic battle with Vanko's drones panning in every direction, filling the room with massive explosions, gunfire and zipping through obstacles, generating a stunningly hemispheric soundfield.

At the same time, the soundstage feels continuously broad and expansive with lots of background activity fluidly moving across the screen and into the top heights. Imaging also delivers an excellently detailed mid-range and magnificent balance between the channels with superb acoustical detailing and crystal-clear dialogue even during the loudest segments. Most impressive is an authoritative, wall-rattling low-end that'll test the limits of one's subwoofer, providing a room-shaking boom to the explosions and a threatening oomph to every drone's landing. Again, the climactic fight against Whiplash is pure reference quality, utilizing all the speakers along with a bass that energizes the room. There is a slight distortion in the higher frequencies, but that may be intentional because of the blasts from the drones. But aside from that, this object-based mix is fantastic. (Dolby Atmos Audio Rating: 96/100) 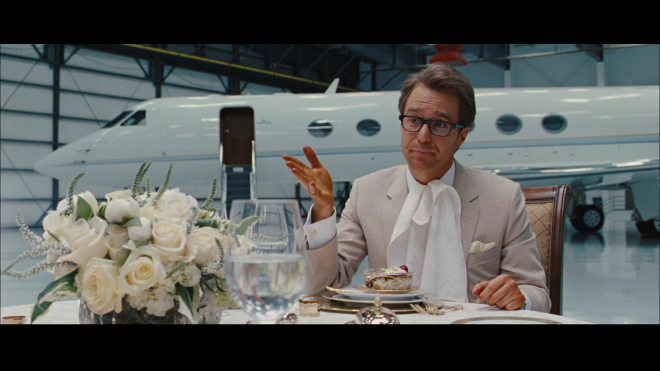 The same set of supplements are ported over and available on the accompanying Blu-ray. 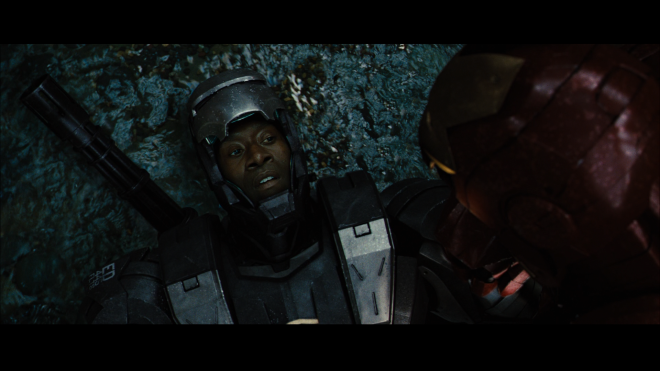 Robert Downey Jr. suits up again in Iron Man 2, a straightforward follow-up that also goes a bit wonky and silly at times. Nevertheless, the sequel feels like a logical continuation of the first film's events while providing more dramatic depth to Tony Stark, delivering a decently satisfying and entertaining movie that looking back, lays the groundwork for future Marvel installments. The sequel crashes into 4K Ultra HD Blu-ray with largely satisfying HDR10 presentation that provides a welcomed improvement over the Blu-ray. But the real showstopper is the stunning, reference-quality Dolby Atmos soundtrack that easily surpasses its lossless counterpart. Although the same bonus material is ported over, this UHD edition is Recommended for MCU fans.

Sale Price 19.99
List Price 39.99
Buy Now
3rd Party 19.99
In Stock.
See what people are saying about this story or others
See Comments in Forum
Previous Next
Pre-Orders
Tomorrow's latest releases