Tom Cruise narrates the documentary short film Space Station, an IMAX production giving moviegoers a tour of the International Space Station while still in the early stage of assembly. Landing on 4K Ultra HD Blu-ray, the film boasts a beautiful HDR10 presentation and a highly satisfying DTS:X soundtrack, but a small set of supplements. Still, the UHD package is Recommended.

Although it may not seem like much given how far camera technology has come in the last twenty years, the short documentary Space Station marks a milestone in the history of cinema. The fan-favorite IMAX production is the first 3D film to be shot in outer space in that specific format. Using the latest state-of-the-art technology for capturing some of the most mesmerizing views while orbiting Earth, that morsel of trivia seems all the more fitting when considering the first test run of these advanced cameras captured another historic marvel of engineering: the assembly of the International Space Station (ISS). This amazing achievement in space travel is a massive endeavor requiring the joint cooperation of five agencies from around the world, a project that was at once meant to strengthen peaceful collaboration between nations as well as foster our collective knowledge in various fields of science.

Orbiting above us right now at an altitude of around 400 kilometers, astronauts conduct various experiments, tests, and research benefitting the citizens of Earth, particularly in the area of medicine. The cool thing about this doc is that it now serves as a kind of time capsule, giving us an opportunity to look back at the early stages of the station's construction and reflect on how far humanity has come. Today, it is a gigantic habitable artificial satellite about the length of a football field that remains continuously occupied and has been tenanted by astronauts of fifteen different nationalities. However, back in 2002 when this documentary initially premiered, the shared venture was only about four years old, and this film allows audiences a glimpse into its assembly, fueling the imagination of science nerds like myself with a world of possibilities and fantasies for humanity's future. 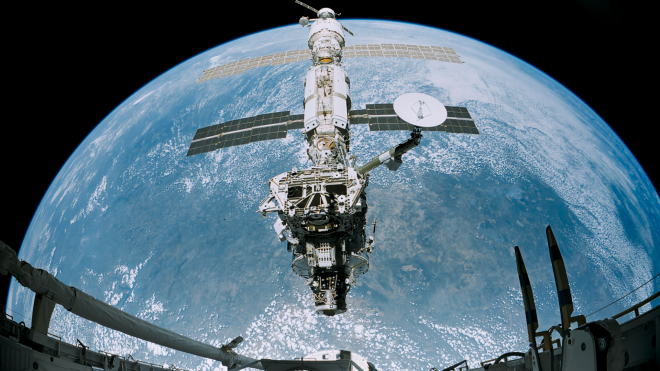 Hollywood megastar Tom Cruise narrates this impressive feat with various tidbits of the challenges and dangers faced by astronauts, most notably the plausibility of floating into space and practicing the best safety protocols. In fact, a good portion of the film is discussions on the rigorous training and exercising of each space traveler, both before arriving at the station and even while inhabiting it. Various astronauts talk about their contributions and careful, delicate work performed by everyone, but the best parts, in my opinion, are seeing them conducting chores or the many stunning scenes of the station and shuttle floating above Earth. However, what ultimately makes this documentary such a cool watch is observing them simply living in zero gravity. Filmed by the astronauts themselves, they have a great sense of humor and display the sort of camaraderie we could only hope to see more of here on Earth.

Mill Creek Entertainment brings the documentary to 4K Ultra HD Blu-ray as a two-disc combo pack with a Digital Copy code, which is only redeemable at movieSPREE.com. Inside a black, eco-elite case with a slipcover, the dual-layered UHD66 disc sits comfortably opposite a Region Free, BD25 disc containing only the 2D version of the movie. Sadly, the 3D Blu-ray disc is not included, which would have made a nice addition. At startup, the disc goes straight to a menu screen with full-motion clips, the usual options at the bottom and music. 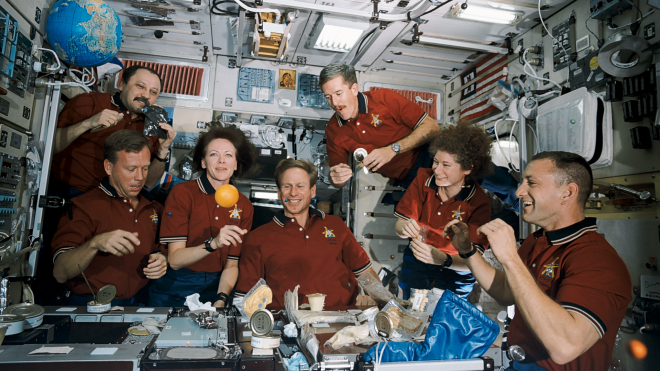 The short documentary orbits the world of Ultra HD with a beautiful-looking and often stunning HEVC H.265 encode, but it's not the leaps and bounds upgrade we'd expect from the IMAX 65mm camera rigs. Compared to the Blu-ray from 2010, many scenes appear relatively similar to the 2D version in terms of sharpness and detailing, which is easily excused as the result of the filmmaking style and the age of the original elements. Worth taking into consideration is the film stock and the particular camera used at the time, which shot a 3D image simultaneously side-by-side onto one reel of film as opposed to their newer digital cameras.

Nevertheless, the 2160p transfer definitely enjoys an appreciable uptick in overall definition, along with displaying other areas of improvement. The fine lines of the shuttle, the space station and various other components of the exterior are a bit more distinct and clearer while the stitching of clothing and fabric interiors are easier to make out. Still, a good chunk of the picture falls on the softer side of things, mixed with some poorly-resolved sections likely inherent to the photography or due to the condition of the source. There are also instances of minor aliasing or light flickering along the sharpest edges solar panels, and occasionally, there is some very mild banding in the shots of Earth and negligible telecine judder, making the ocean appear as though pulsating in a couple of shots.

The real and most appreciable achievement in this 4K video is the improved contrast and brightness, providing the 1.78:1 image with crisper, more brilliant whites and deeper, inkier blacks. The overall picture is notably brighter with tighter, narrower specular highlights in the more intensely luminous spots, such as the sun's glare off the space station or shuttle as seen from the outside. However, this doesn't compare to some of the best HDR10 presentations we've seen from IMAX, and the improvement is only visible in the exteriors shots whether we're on Earth or against the vast, velvety blackness of space. Interior shots tend to be flatter and slightly duller, but again, compared to the 2D HD SDR version, the brightest sections no longer bloom as badly or intensely, looking more film-like. At the same time, primaries are observably richer and better saturated, especially the blues and reds in the outfits and some trinkets. Most of the palette is fairly limited though, but secondary hues are also nicely rendered with a bit more pop and energy, such as the shuttle launch scene from the ground. (HDR10 Video Rating: 82/100) 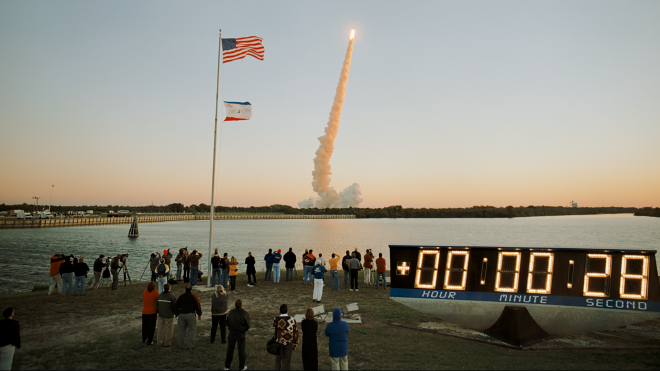 IMAX launches the doc into home theaters with a fantastically outstanding DTS:X soundtrack, which is "IMAX Enhanced" for those equipped and comes with a few demo-worthy moments audiophiles will love. And of course, one such moment is the shuttle launch sequence at around the 30-minute mark where the firing of the rockets will have subwoofers growling insanely, pushing them to their limits while energizing the room with an authoritative, couch-shaking, wall-rattling low-end.

At the same time, the crackling distortion of their bursts swells and reverberates across the overheads and into the surrounds while bits of debris rain down everywhere, generating an impressively immersive hemispheric soundfield. The voices during radio communication also echo from above the listening area. Quieter scenes, on the other hand, refocus our attention to the front soundstage where dialogue is crystal clear and precise, for the most part. However, Tom Cruise's narration can occasionally be drowned out by the louder segments while the voices of astronauts spread across all three front channels. But even these sections still display plenty of background activity with excellent fluid movement and balance. Imaging is continuously broad and expansive with well-defined clarity and detailing in the mid-range, and several subtle noises spread into the top heights for a welcomed half-dome effect. (DTS:X Audio Rating: 92/100) 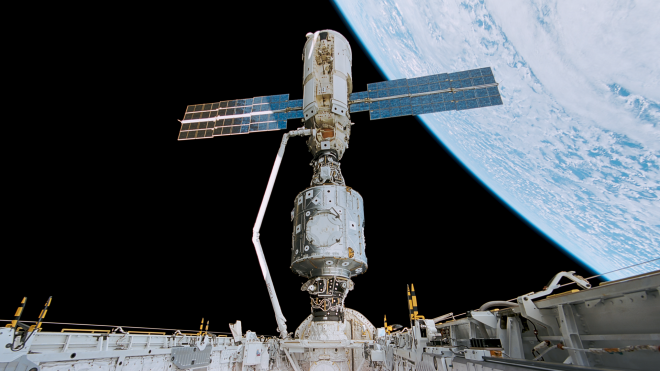 Unlike the 3D Blu-ray release, this Ultra HD edition comes with a small set of bonuses. 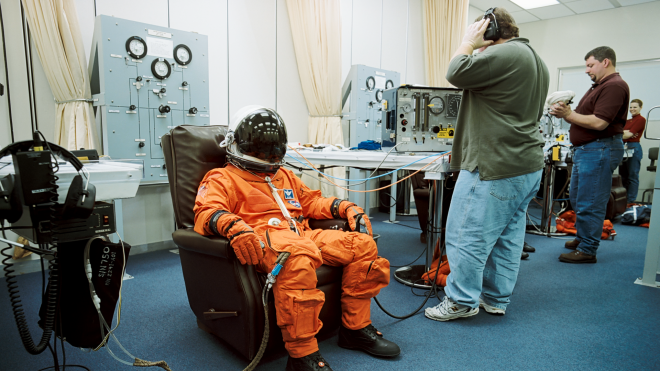 Back when the International Space Station was still in the early stage of assembly, Tom Cruise took audiences through a guided tour of the massive joint endeavor in Space Station. The IMAX production was originally intended for 3D theaters, but even in 2D, the short documentary remains a visually mesmerizing watch celebrating an amazing achievement in engineering and space travel. The film lands on 4K Ultra HD Blu-ray with a beautiful-looking HDR10 presentation and a highly satisfying, IMAX Enhanced DTS:X soundtrack. With a small but nonetheless informative set of supplements, the overall UHD package is Recommended.

Sale Price 19.48
List Price 20.72
Buy Now
3rd Party 20.72
In Stock.
See what people are saying about this story or others
See Comments in Forum
Previous Next
Pre-Orders
Tomorrow's latest releases