Joel Schumacher's Batman Forever is better remembered for its stylishly colorful cinematography, Jim Carrey's Riddler, nipples on the Batsuit and signaling the franchise's death knell. The third installment lands on Ultra HD with a stunningly beautiful 4K HDR10 presentation, an excellent Dolby Atmos soundtrack but the same bonus collection. Still, the UHD package is Recommended for the most hardened fans and franchise completists.

Despite the financial success of Batman Returns, Warner Bros. decided to take the franchise in a more suitable-for-children direction while increasing its merchandising potential. That meant essentially course-correcting Tim Burton's darker fantasy, character-driven direction, established in the aforementioned sequel. And this is where director Joel Schumacher steps in, a filmmaker noted for his tonally-somber, mature-themed and psychologically-complex thrillers, such as The Lost Boys, Falling Down and A Time to Kill. However, for Batman Forever, Schumacher complied with studio execs' thirst for the family-friendly market, turning in a laughably cartoonish and ultimately preposterous version of the Dark Knight.

The end result is perhaps the most expensive, absurdly flamboyant phantasmagoria of comic book stereotypes, bathed in a garish, sensationally hypnotizing array of colors thanks to the talents of cinematographer Stephen Goldblatt. Schumacher wastes no time in ensuring fans this is an unmistakably different vision for the series when several minutes are devoted to Val Kilmer's Batman thwarting the bizarre sexual advancements of Dr. Chase Meridian (Nicole Kidman), whose expertise has grown into fetishist obsession. And frankly, neither Kidman, her character nor Kilmer belong in the Bat-verse. In this pulpy, campy adaptation of the Caped Crusader, the over-the-top performance of Jim Carrey as Edward Nygma and The Riddler is the only aspect that ever feels appropriate, decently entertaining and memorable.

As for Tommy Lee Jones as Two-Face, the villain is really better suited for Warren Beatty's Dick Tracy adaptation. And the less we talk about Bat nipples, the better. 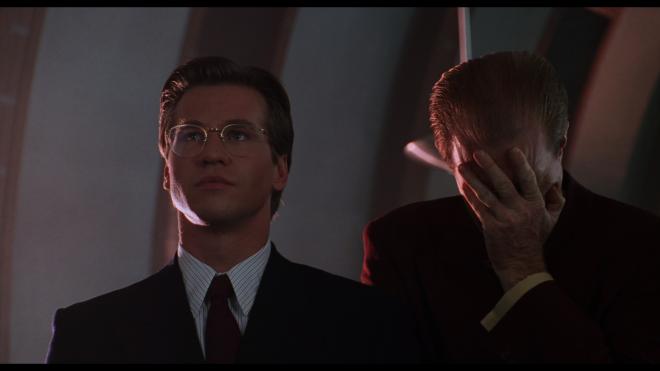 Warner Home Video brings Joel Schumacher's Batman Forever to Ultra HD Blu-ray as a two-disc combo pack with a flyer for a Digital Copy. When redeeming said code via WB.com and Movies Anywhere, it includes the SD, HDX (1080p) and 4K UHD with Dolby Vision and Dolby Atmos on various streaming platforms. The triple-layered UHD100 disc sits comfortably opposite a Region Free, BD50 disc, and both are housed inside a black, eco-cutout case with a shiny, glossy slipcover. At startup, viewers are taken to a generic static screen with the usual options along the bottom and music playing in the background. Like its predecessors, this cartoonish sequel's swings into the dangerous streets of Ultra HD thanks to a new 4K remaster of the original elements, almost immediately showing better definition and clarity in the opening battle sequence against Two-Face. Close-up shots of the cast are often shockingly revealing, exposing every pore, tiny wrinkle and the most minuscule blemish while the threading and stitching of clothing, especially in Dr. Meridian's outfits, are incredibly razor-sharp. Speaking of, viewers will now able to better make out every detail in Batman's Batcave, the absurdly toyish Batmobile and his new Batsuit, such as the exaggerated muscular features and the . . . ahem, nipple regions. We can also count each brick in the buildings, note every individual hair in the perfectly combed hairdos and better appreciate the amount of talent that went into the stage production. Naturally, as is often the case, the dated CG visuals and some of the practical effects don't hold up, largely looking blurry and poorly resolved, keeping this new remaster short of perfection.

Nevertheless, the real triumph in this HDR10 presentation is the significant improvements seen in the overall palette, making for the most strikingly surreal and hallucinatory visual experience for a dark comic book hero. Stephen Goldblatt's vibrantly colorful cinematography is layered with a sumptuous array of wildly fantastical secondary hues, from the cotton-candy pinks in the streets and the bubblegum fuschia of Riddler's hair to the alluring tiger, marigold oranges surrounding Dr. Meridian and the warm gold canary yellows of various light sources. Arguably, most captivating is the variety of purples consuming Harvey Dent's angrier side, like the deep eggplant violets of his scars exposing lively, magenta-colored veins while background lighting is a vivid lavender and his clothes a bright lilac. At the same time, primaries are richly saturated and eye-catching, from the intense, electrifying blues and the mix of neon lime greens and shamrock emerald circling the Riddler to the crimson rose reds of lights.

Also, the 4K video presentation continues to dazzle with improved contrast and brightness, ensuring all those pretty colors in the photography really pop and illuminate the endless darkness enshrouding Gotham. Pitch-perfect whites are radiant and ecstatic with brilliant luminosity, showing distinct differences in the brightest spots of neon lights. Specular highlights are also tighter and crisper, making the light reflect off various surfaces with more realism and allowing better visibility within the hottest glow. However, scenes with large explosions tend to fall flat and lose much of their luster. Full-bodied black levels, on the other hand, are noticeably inkier and more luxurious than its HD SDR counterpart with spotless gradations between the lighter and darker portions, revealing a bit more in the costumes and vehicles. Velvety, rich shadows never engulf the finer details, adding a splendid cinematic quality and dimensionality to the 1.85:1 image while delivering clear differences between the various shades. (Video Rating: 94/100) The Bat soars over the city of Gotham with an exceptional Dolby Atmos soundtrack that terrifically enhances the jovial fun and silliness of its Dolby TrueHD counterpart. The surrounds are often employed with a flurry of various atmospherics to bring the comic-book city alive, full of commotion and excitement whether characters are out and about in the streets or schmoozing at a Nygmatech shindig. It's not always consistent, but the room is frequently filled with voices of people chatting being interrupted by sudden bursts of action, some of which also convincingly travel above the listening area. Debris flies in every direction and into the height channels, scattering all around, or helicopters flawlessly pan across the overheads from one side of the room to the other, generating an immersive hemispheric soundfield on various occasions.

Perhaps the biggest and added improvement to the original design is the wider and more spacious soundstage where many of those same atmospherics fluidly move between the channels with notable balance and outstanding fidelity. Imaging feels expansive as a variety of background activity effortlessly sweep across the fronts and top heights, creating an outstanding sense of presence and space. Meanwhile, the extra breathing room exhibits crisp, sharp dynamics and acoustical detailing, which Elliot Goldenthal's score notably benefits from while vocals remain precise and very well-prioritized amid all the loudest ruckus. The low-end isn't particularly memorable, but it can be decently commanding with a hearty, responsive oomph to provide the cartoonish visuals some appreciable weight. (Audio Rating: 94/100) The same collection of bonus features are ported over and contained on the accompanying Blu-ray disc while the UHD shares the commentary track only. 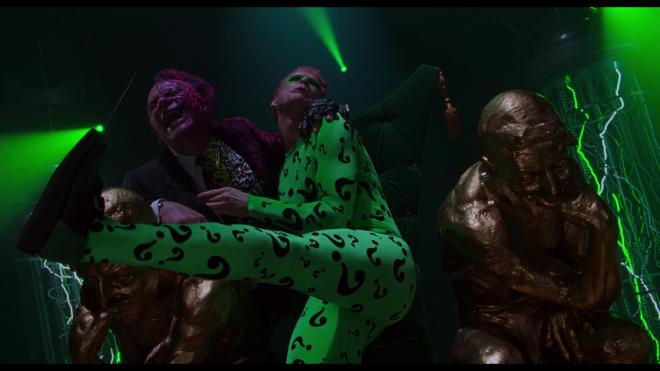 Warner Bros. course-corrected the Batman franchise into a more family-friendly series with a broader merchandising appeal in Batman Forever, in large part thanks to the hypnotically colorful direction of Joel Schumacher. Sadly, aside from the unwelcome appearance of Nicole Kidman, the bland performance of Val Kilmer, the weirdly clownish Tommy Lee Jones' Two-face and the unnecessary glimpse of Bat nipples, the only fun aspect of this sequel is the campy, over-the-top Jim Carrey as The Riddler. The third installment lands on the pastel city streets of Ultra HD with a stunningly beautiful 4K HDR10 presentation that easily defeats its Blu-ray counterpart while featuring an excellent Dolby Atmos soundtrack. With the same set of supplements as before, the UHD package is recommended for the most hardened fans and completists.

Sale Price 24.62
List Price 41.99
Buy Now
3rd Party 59.99
In Stock.
See what people are saying about this story or others
See Comments in Forum
Previous Next
Pre-Orders
Tomorrow's latest releases