Jordan Peele's twisted horror flick Us is a nightmarish vision about doppelgängers, masking some thought-provoking insights and social commentary. Peele's sophomore efforts debuts on 4K Ultra HD Blu-ray with a beautiful Dolby Vision presentation and a near-reference Dolby Atmos soundtrack, but a small collection of bonuses. Still, the 4K package is Highly Recommended.

"Therefore thus saith the LORD, Behold, I will bring evil upon them, which they shall not be able to escape; and though they shall cry unto me, I will not hearken unto them."

Proving Get Out was most definitely not a one-off fluke, writer and director Jordan Peele follows the box-office success and storytelling genius of his 2017 directorial debut with Us, a superb sophomoric effort that is as grippingly terrifying as it is imaginatively cerebral. In this psychological horror flick, Peele, once again, milks the genre for all its worth, weaving a disturbingly twisted tale brilliantly underscored by weighty sociopolitical subject matters. And he wastes little time in exploring those pressing ideas during the opening flashback sequence where he plainly makes allusions to the 1986 Hands Across America event, a specific Bible passage and the hall of mirrors inside a culturally-insensitive funhouse. At the same time, Peele shows off his cinephile nerdiness with very subtle references to cult favorites like The Lost Boys, Jaws, C.H.U.D., The Shining and others while perfectly capturing the chilling, apprehensive atmosphere of The Twilight Zone, which serves as direct inspiration.

Taken at face value, Peele's script can be enjoyed as a straightforward thriller with an unexpected twist, requiring viewers to pay closer attention to the various clues sprinkled throughout. Lupita Nyong'o stars as Adelaide Wilson, a loving but also a somewhat troubled mother of two, Zora (Shahadi Wright Joseph) and Jason (Evan Alex). Traveling with her husband Gabe (Winston Duke), the family heads to their summer beach house in Santa Cruz,  where they meet friends, Kitty (Elisabeth Moss) and Josh (Tim Heidecker) Tyler and their twin daughters (Cali and Noelle Sheldon). As the night creeps in, the Wilsons are confronted by another and more sinister, creepy versions of themselves dressed in blood-red jumpsuits, holding gold-plated scissors and wearing a single glove, reminiscent of Michael Jackson. At once, we have a darkly grotesque fantasy variation of the familiar home invasion plot, one that soon spirals into bizarre sci-fi territory without missing a beat or abandoning the tension. 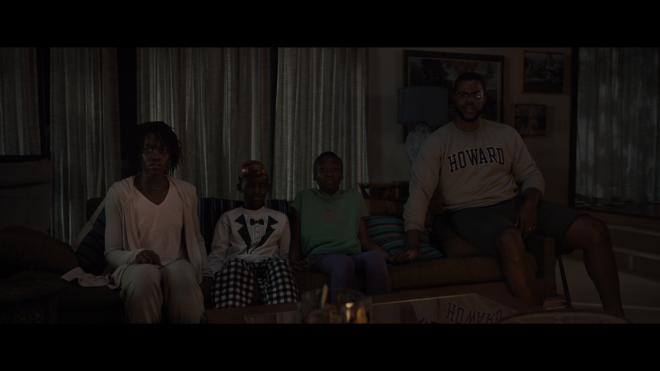 However, much like the underground tunnels hiding underneath the United States — a brief bit of trivia mentioned at the start — there is a great deal lurking beneath the surface of this story about doppelgängers. This becomes immediately apparent when Red (Nyong'o) is asked who they are and she responds, "We're Americans." Only, these mythological figures are not simply copies of the characters but mirror images, reflections revealing either the worst or best in each while signaling philosophical concepts on the duality of American society. The name change of the funhouse twenty years later rather than tearing it down is suggestive of the inherent racism and bigotry in U.S. history, the habit of suppressing the truth or rebranding it instead of confronting it. The Black Flag T-shirts and logo becoming socially acceptable and fashionably mainstream, relinquishing its original intent to the abstract forces of capitalism. And there are more fascinating ideas worth exploring for another time and in a longer piece.

Still, the more captivating and engrossing aspect of Us — a title that also functions as a pun for the initials U.S. and suggestive of the audience ("We're watching Us tonight!") — is Peele touching on issues of economic inequality and the ineffectiveness of public displays to societal ills. In a way, the Bible passage hints at this blind worship and faith to public events like Hands Across America, which are well-intended but fail to actually address the problem of poverty while still indulging in the rampant consumerism and material excess causing the problem. Impressive still is Peele artfully tackling class divides and upward social mobility, an ingenious horror allegory of a bougie family. This is particularly true of Gabe, who is seen often in his Howard University sweatshirt, constantly keeping up with the Joneses (i.e., the Tylers) and suddenly code-switching when confronting his family's doubles. My favorite moment is the car ride while blasting the hip-hop classic "I Got 5 on It" by the Oakland-based rapping duo Luniz and seeing Nyong'o's Adelaide unable to keep up with the song's haunting rhythm.

Frankly, I can spend a great deal discussing the multilayered genius of Jordan Peele's Us, as it is chock-full of insightful social commentary and some deeply profound musings worthy of more attention. And as he did in Get Out, Peele expresses his compelling ideas with inventive camerawork and creepily evocative visuals, balanced with unexpected humor. Working closely with cinematographer Mike Gioulakis, many scenes are masterly designed with conveying duality and complementary doubles, some shots more subtle than others. Tethering all these complex, labyrinthine images together is the exceptionally memorable performance of Lupita Nyong'o. In her first leading role, her dual portrayal as the quieter, timid Adelaide and the more vocal, self-assuredly aggressive Red inspires further discussion of confronting one's former life, of growing from and beyond negative experiences of the past. Nyong'o is an absolute marvel in a remarkably smart horror film from a talented and promising filmmaker.

Universal Studios Home Entertainment brings Jordan Peele's Us to 4K Ultra HD Blu-ray as a two-disc combo pack with a Digital Copy code. When redeeming said code via Universal's website or Movies Anywhere, users have access to the 4K Dolby Vision version with Dolby Atmos audio. The triple-layered UHD100 disc sits comfortably opposite a Region Free, BD50 disc inside a black, eco-elite case with a slipcover. At startup, the disc goes straight to a static screen with the usual options along the bottom and music playing in the background. 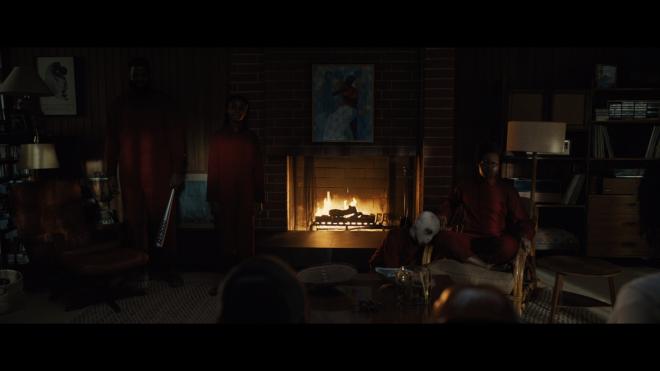 Deranged, murderous doppelgängers invade the cozy, suburban neighborhoods of 4K Ultra HD Blu-ray with a lovely and often impressive HEVC H.265 encode, offering a noteworthy step-up over the Blu-ray to make it the best and preferred way to enjoy this nightmarish vision.

The movie was shot using the Arri Alexa camera system, capable of 3.4K resolution, but later mastered to a 2K digital intermediate. The upscaled transfer displays a noticeable uptick in overall definition, making fine lines in the clothing, furniture and surrounding foliage a tad sharper. It's not a significant increase, but objects in the background are made slightly more visible where viewers can better make out every nook and cranny of the houses, exposing a clear distinction between the two middle-class families. Close-ups expose pores and minor blemishes with lifelike textures while every whisker and hair is distinct. A few moments can be softer than others, however, and the 2160p picture comes with some instances of mild aliasing.

The more attractive improvement is the contrast and brightness, providing the 2.39:1 image with a more beautiful cinematic appeal. Granted, Mike Gioulakis' heavily-stylized cinematography is noticeably subdued, but whites are crisper and brighter while the rest of the 4K video remains somewhat restrained. Specular highlights enjoy a welcomed boost, supplying the hottest areas a narrower but more radiant bloom while still allowing better visibility of the finer details. The most significant upgrade still is the dramatically richer and inkier black levels, furnishing all nighttime sequences and poorly-lit environments with silky, velvety shadows that penetrate deep into the screen. Admittedly, some background information tends to be engulfed by the darkest corners, but this also appears to be a deliberate creative decision for generating a more menacing and ominous feel.

The stylized aesthetics moderately hinder the overall palette, as well, but the colors enjoy a bit more pop and brilliance in this Dolby Vision presentation. The teal-orange photography favors earth tones and lots of browns, bathing many scenes with warm yellows and soft ambers. This is particularly true of the Wilson household, making their home more welcoming than the Tyler's. Other secondary hues are fairly limited due to this, but there are few scenes displaying good variation while flesh tones appear natural and healthy. Part of the intentional look seems to restrain greens though still accurately rendered while reds are fuller and deeper, making the crimson-colored jumpsuits weirdly more threatening. Comparatively, blues and cyans are more animated and energetic than its HD SDR counterpart, which both adds to the fascinating look of the film overall and another interpretive layer. (Dolby Vision Video Rating: 84/100) 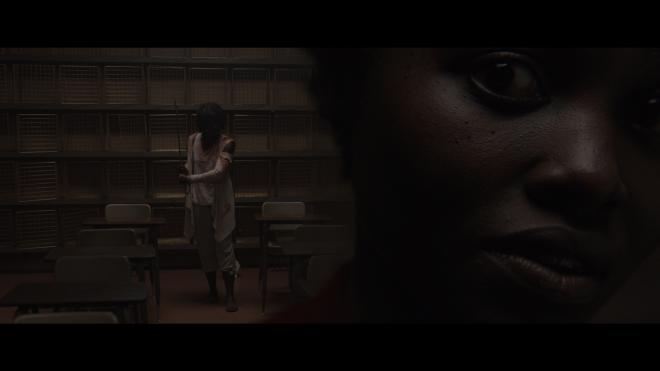 A terrifyingly awesome, near-reference Dolby Atmos soundtrack compliments the sinister visuals, delivering the creeps along with the chills.

Granted, much of the action is spread across the front soundstage, displaying a dynamic and impressively extensive mid-range. Imaging exhibits plenty of warmth and stunning clarity while background activity employs all three channels and top heights, fluidly moving into the off-screen space and creating a highly-engaging half-dome environ. Michael Abels' hauntingly unconventional score and song selections enjoy all the extra breathing room, boasting distinct separation and room-penetrating clarity within the instrumentation while also bleeding into the ceiling channels for fully engaging and enveloping viewers.

All the while, vocals remain precise and crystal-clear, showing an unequivocal pitch and tone difference in Lupita Nyong'o' stunning performance. The low-end is perhaps the biggest surprise of all, delivering strikingly powerful, couch-shaking bass not only to the action and music but also during some of the most unexpected moments.

The design also makes excellent uses of the surrounds and heights during just the right moments, such as when the Tethered first appear and break into the Wilson house. The entire room echoes and rumbles as Abraham pounds on the front door, but due to the camera's perspective, the terrifying noise realistically comes from behind and reverberates into the rear heights. At the same time, as Umbrae climbs onto the roof of the house, she convincingly crawls above the listening area from one side of the room to the other. In the second half of the movie as chaos erupts in the streets of Santa Cruz, other atmospheric effects, like a helicopter or the local wildlife fluidly panning between various channels, employ the surrounds and overheads to create an immersive hemispheric soundfield. (Dolby Atmos Audio Rating: 94/100) 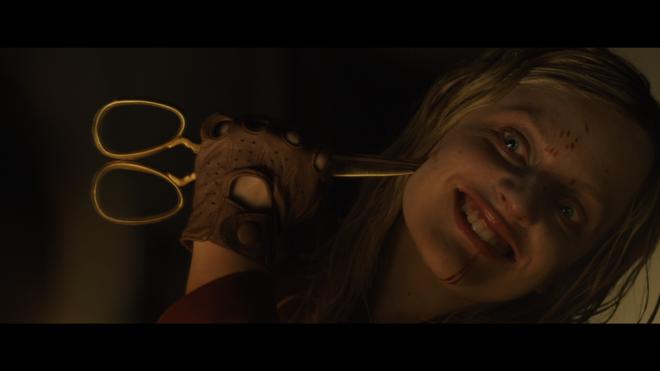 The same set of meager supplements can be accessed on both the Ultra HD and Blu-ray discs. 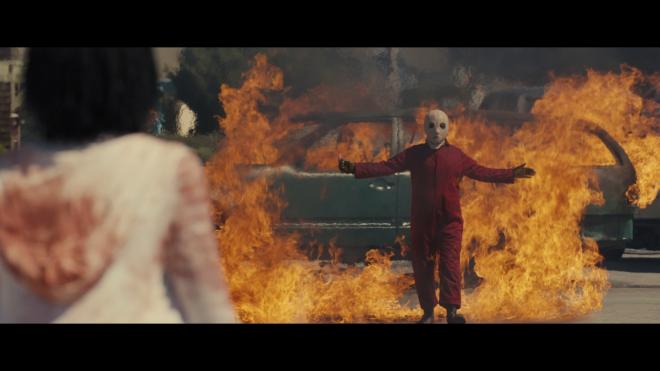 In his sophomoric follow-up to Get Out, Jordan Peele, once again, surprises with another darkly twisted psychological thriller in Us, a horror allegory with pressing social commentary and thought-provoking ideas that'll have viewers discussing long after the scares are over. Peele's nightmarish vision of modernity debuts on Ultra HD with a beautiful 4K Dolby Vision presentation that delivers an impressive upgrade over its Blu-ray counterpart. A highly-satisfying, near-reference Dolby Atmos soundtrack is accompanied by a disappointingly small but still worth watching collection of bonus features. All things considered, the overall UHD package is Highly Recommended for fans of smart genre flicks.

Sale Price 14.99
List Price 22.98
Buy Now
3rd Party 13.78
In Stock.
See what people are saying about this story or others
See Comments in Forum
Previous Next
Pre-Orders
Tomorrow's latest releases