Roland Emmerich's Godzilla (1998) is a bad reimagining of the iconic movie monster, but, at least, it's a fun bad movie about a gargantuan iguana wreaking havoc in New York City. The disaster epic lands on Ultra HD with a brand-new 4K HDR10 remaster and an excellent Dolby Atmos soundtrack, but the same set of bonus features as the original Blu-ray. Still, the UHD package is Recommended.

If there's one positive take away from Roland Emmerich's disastrously-bad disaster epic Godzilla (1998), it has to be this epic-fail proves we don't actually want realism in our movies, that we ultimately don't care about a movie being scientifically accurate or adhering to scientific fact. What we want and desire on the screen is the semblance of reality, of appearing true to the internal logic established by a story's creator or creators — otherwise known as verisimilitude. But in this Americanized-reimagining of the classic monster, the filmmakers attempted realism over verisimilitude when designing our favorite gargantuan lizard. Emmerich and company opted for a more realistic gigantic, radioactive theropod iguana, dubbed "Zilla," instead of the more familiar and iconic look, which is the mountainous, amphibious, dinosaur-like colossus.

When Emmerich's monster made its appearance, about 45 minutes into the movie, to do battle against Matthew Broderick and Jean Reno — and in New York, which for hardened fans is a head-scratcher in and of itself — the creature was more laughable than terrifying or threatening. So, lesson learned. Thank you, Mr. Emmerich, for at least that much from your spectacularly failed attempt because the canonical, wildly-fantastical and totally-not-like-anything-in-reality look of our iconic Gojira is much preferred, as evidenced by the new franchise. And yet, I admit to enjoying this incredibly silly, bad movie. At least it's fun. 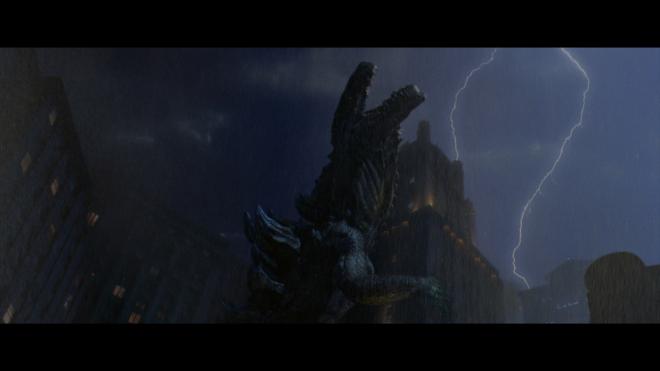 For a more in-depth take on the film, check out our original Blu-ray review HERE from 2009.

Sony Pictures Home Entertainment brings Roland Emmerich's Godzilla (1998) to Ultra HD Blu-ray as a two-disc combo pack with a flyer for a Digital Copy, which can be redeemed via sonypictures.com and Movies Anywhere. When redeeming said code, users have access to the 4K Dolby Vision version with Dolby Atmos audio on certain streaming platforms. The triple-layered UHD100 disc sits comfortably opposite the same Region Free, BD50 disc as the previous 2009 release, NOT the "Mastered in 4K" edition from 2013, and both are housed inside a black, eco-elite vortex case with a glossy slipcover. At startup, the disc goes straight to an interactive main menu that changes screens when switching between the usual options while music plays in the background.

A giant lizard wreaks havoc upon New York City, and only Matthew Broderick can save humanity with Jean Reno and a tremendously excellent HEVC H.265 encode by his side. Reportedly coming from the 4K restoration and remaster of the original 35mm camera negatives used for the 2013 "Mastered in 4K" Blu-ray edition, the 2160p transfer destroys its predecessor to rubble, displaying outstanding definition and clarity for a majority of the runtime. Fine lines along buildings, clothing, the military compound and the inside of the Madison Square Garden are sharply detailed, and facial complexions are highly revealing with often stunning lifelike textures. However, with the production mostly shot at night in pouring rain, much of the picture falls on the slightly softer side of things. Added to that, the dated CG effects have not aged well at all, often looking noticeably blurry, and there are several poorly-resolved moments that appear inherent to the source but nonetheless distract from the transfer's best aspects.

Notwithstanding, the 4K video still manages to save The City That Never Sleeps with notably boosted contrast, boasting more resplendent, brighter and crisper whites throughout. Specular highlights are also tighter and narrower, allowing better visibility of the finer details within the hottest spots, such as the variou high-power lamps and explosions. Along with that, black levels are noticeably richer and truer than its HD SDR counterpart, showering the 2.39:1 image in inkier, silkier shadows without sacrificing delineation and providing the action with a beautiful cinematic appeal. Because a majority of the story takes place at night, the overall teal-orange palette feels fairly limited, but the HDR10 presentation nonetheless delivers improved, fuller primaries, which are more apparent during daylight exteriors. Secondary hues are a bit more nuanced, showing deeper saturation in the fiery oranges of explosions and better, peachier rosiness in the flesh tones, making for a great-looking bad movie! (Video Rating: 80/100)

Along with the video, the giant lizard disaster epic is a bombastic listen in Dolby Atmos, which comes courtesy of the same 4K remaster of the original elements. However, the soundtrack comes with several caveats worth mentioning, restraining the monster from completely demolishing the Big Apple.

The issue comes from how the height channels have been utilized, which frankly, is not wholly satisfying or effective enough to generate a convincing hemispheric soundfield. Various effects, particularly the rotary wings of helicopters and the blast of jet engines, zoom overhead at serious decibels levels, making them sound loud and somewhat distorted. Explosions, too, tend to lack clarity and precision when echoing all around, and this tends to distract from the on-screen action and visuals because they seem forced and spread thin, making the soundscape occasionally feel artificial.

Some will surely point this out as a purely subjective dissatisfaction, and while that may seem like a warranted rebuttal, such action sequences still remain exaggerated and come at higher decibels than the other channels. Besides, other moments don't have a similar issue, such as the rain genuinely feeling as though pouring from above and Zilla's growl smoothly panning across the heights. The surrounds are consistently and better employed, providing a more engaging and enveloping balance.

Also, the front soundstage is broad and spacious, continuously active with a variety of background noises that convincingly travel into the off-screen space. Though fidelity isn't the strongest during the loudest segments, largely lacking warmth and failing to sustain excellent definition in the upper frequencies, the mid-range, on the whole, maintains appreciable clarity and detailing, just enough to praise the results and warrant its final score. On top of that, dialogue reproduction is well-prioritized and intelligible even in the craziest, ear-piercing action sequences. At the same time, a commanding, authoritative low-end repeatedly provides a palpable, couch-shaking rumble and a powerful, wall-rattling oomph to every stomp, collapsing building and explosion, making this object-based track, ultimately, a fun listen at home. (Audio Rating: 82/100)

Sony ports over the same set of meager supplements as the 2009 Blu-ray (the Mastered in 4K version didn't contain special features), which you can read more about over HERE.

Objectively speaking, Roland Emmerich's Godzilla (1998) is a terribly bad American production of a classic horror monster where the filmmakers reimagined the iconic monster as gargantuan theropod iguana, a monster that turned out more laughable than terrifying. Stomping into screens during an era when summer blockbusters were highly-anticipated cinematic events, the absurdly bad disaster epic is still an oddly fun joyride of massive proportions. Zilla wreaks havoc on Ultra HD with an excellent HDR10 presentation struck from a brand-new 4K remaster of the OCN, accompanied by an equally excellent Dolby Atmos soundtrack. Although the same collection of supplements are ported over from the previous release, the overall UHD package is nonetheless recommended for fans.

Sale Price 18.99
List Price 30.99
Buy Now
3rd Party 24
In Stock.
See what people are saying about this story or others
See Comments in Forum
Previous Next
Pre-Orders
Tomorrow's latest releases