In Sword of Storms, Hellboy and Co. dive into ancient Japanese culture to stop two demonic brothers and a sea dragon from destroying people with storms. With Blood & Iron, Hellboy and his friends battle with an evil vampire and witch, while putting ghosts are peace inside a haunted mansion. On 4K Ultra HD Blu-ray, both animated films feature a nicely upgraded Dolby Vision 4K transfer along with a good-sounding Dolby Atmos sound mix. There are also several great bonus features with each film, including commentaries and behind the scenes featurettes. Recommended! 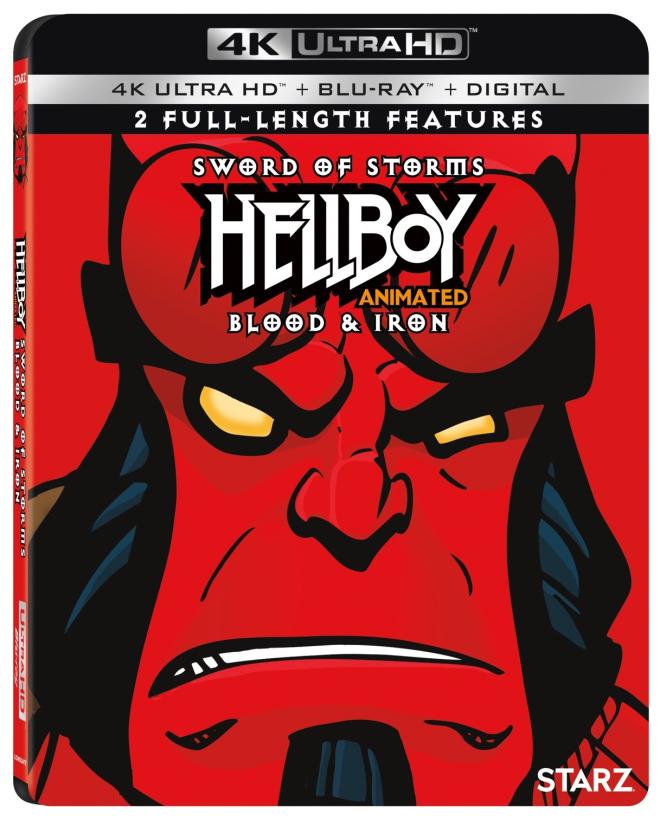 Guillermo Del Toro (The Shape of Water, Blade II) is an avid comic book reader and fan. His favorite story was Hellboy from creator Mike Mignola. In 2004, Guillermo got to make a big budget live-action Hellboy movie, which was met with critical and financial success. Guillermo's unique style and penchant for dark fairy tale stories made his Hellboy movie a wonderful cinematic experience, complete with excellent performances. Guillermo even got to make a sequel in 2008 called The Golden Army. In between those Del Toro productions, Mike Mignola and Darkwing Duck creator Tad Stones made two feature-length animated films for television, Sword of Storms and Blood & Iron

Del Toro was not involved, but Mignola and Stones had Del Toro's actors reprise their roles. Both films run about an hour and 15 minutes, which is fine and dandy, however, there are some sequences that drag on far too long, making some of the story lack a fast-paced film. I think if 15 minutes were edited out in each movie, the story would be much tighter, but still, any new Hellboy is good, right?

In Sword of Storms, we first see Hellboy (Ron Pearlman), Liz (Selma Blair), and Abe Sapien (Doug Jones) battling zombie creatures together just like old times. Soon after that, we meet an old professor named Sakai who finds an ancient scroll that talks about two demonic brothers named Thunder and Lightning who, in the past, wreaked havoc in Japan with powerful storms. Their forces were stopped by a deal made with a Japanese Samurai lord, that is until present day, where Hellboy finds the scroll and is transported to an alternate universe Japan to battle the demonic brothers. Meanwhile, Abe Sapien and Liz investigate some natural disasters that turn about to be sea dragon brothers of Thunder and Lightning. Hellboy must make it back to his time and help everyone fight the evil brothers while the rest of the B.P.R.D. study the odd professor who found the scrolls. It's a fun story for sure and full of great characters, but the story can get a little convoluted.

With Blood & Iron, the storyline takes place in the horror genre and has a bit more violence than Sword of Storms does. Flashbacks show an evil vampire named Erzsebet who brutally kills innocent people and bathes in their blood to keep herself youthful, which was a deal she made with a witch named Hecate. Meanwhile, in present day, Hellboy, Liz, Abe, and Professor Bruttenholm are asked to research a seemingly haunted mansion as a publicity stunt in order to attract tourists. Once there, all hell breaks loose as the spirits are all the dead victims of Erzsebet, which she is trying to reincarnate herself along with Hecate. This puts Hellboy, Liz, Abe, and the Professor in the middle of an old battle in order to stop the evil destruction and deaths of innocent people, along with putting to rest all of the tortured ghosts and spirits that are haunting the mansion.

Both movies have the same charm and wit of the live-action Hellboy movies. I love that the original cast came back to reprise their roles here too. It's such a delight to hear Ron Pearlman, Doug Jones, John Hurt, and Selma Blair joke throughout the movies again. It brings a needed sense of credibility and nuanced performance to each beloved character. On the other hand, though, these animated films don't quite capture the consistency of storytelling that Guillermo brought to the live action films. There isn't a high amount of thrills in these animated films, either, with long gaps in between the more entertaining sequences. Still, there isn't enough Hellboy out there in the world and these two additions are still worth your time for fans of the character.

Hellboy Animated comes with a 2160p 4K UHD Disc with both films, as well as the 1080p Blu-ray Disc with both films. Both discs are housed in a hard, black plastic case with a cardboard sleeve. There is an insert for the digital download codes as well. 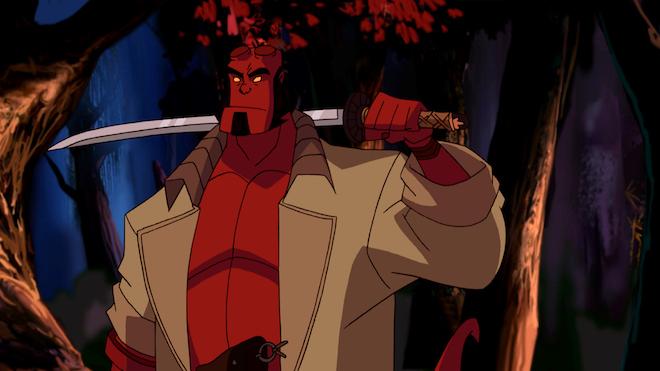 Hellboy Animated features two brand new 1.78:1 2160p 4K UHD Dolby Vision transfers. With its simple animation, it's an odd choice to release this in 4K and Dolby Vision, but if you've owned the previous Blu-ray or DVD copies, you'll find noticeable yet small upticks in the color and animation detail. Colors are a bit bolder and richer, especially in darker sequences in both films. There were noticeable bigger palettes of blue and purple in certain scenes that looked to be more subdued in previous versions without Dolby Vision.

This perfectly contrasts with Hellboy's red figure, which fluctuates in different kinds of animated lighting. At some points, his body has an almost orange hue to it or lighter red, signifying fire. This isn't a particularly bright film, like Pixar movies, but more on par with the latest DC Comics animated film. Black levels are deeper here with no glow or halo effect either. Detail and clarity of the animation are smooth and there was no line instability that I noticed.

Overall, this is a nice upgrade from previous releases in keeping with its unique style. 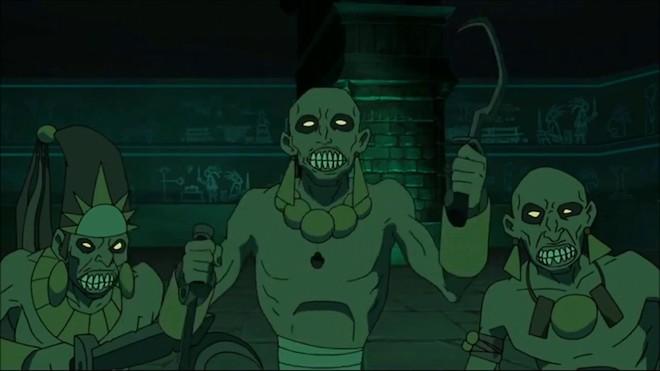 With a Hellboy movie, you'd expect almost non-stop action in the audio department, but these two films feature a ton of dialog sequences, leaving these scenes front-heavy with no surround or overheads sounds. In this sense, Hellboy Animated is quieter than we'd like for a top tier Atmos mix.

Still, there are a few excellent and bigger moments sprinkled throughout. Listen for moaning ghouls and howling demons emanating from your surrounds and height speakers. The filmmakers also do a nice job filling out the background chatter in the B.P.R.D. Atmos fans will delight hearing passing vehicles and helicopters flying overhead. For LFE fans, be on the lookout for when Liz uses her telekinetic powers or when Hellboy power punches an enemy.

Overall, this is a good Dolby Atmos mix -- free of pops, cracks, and hiss -- that improves over previous releases, but one that doesn't quite live up to the full potential of the format and this genre. 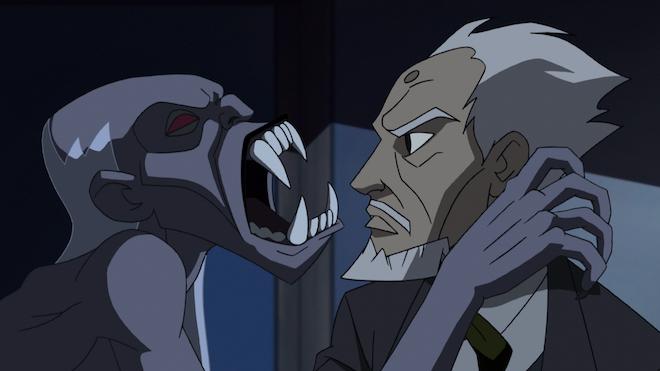 On the previous Blu-ray release of these films, there were no bonus features. However, here we have some decent extras, including audio commentaries, discussions about the animated stories and more, all of which are worth your time. 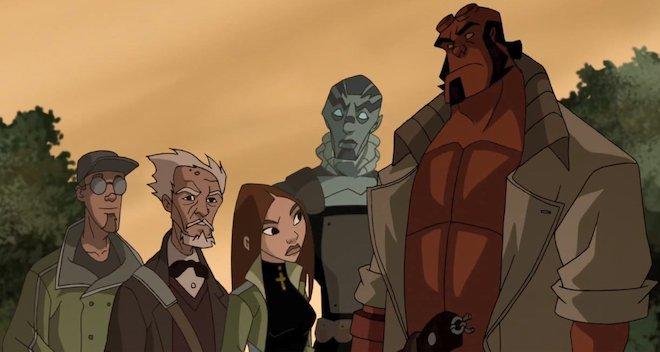 Hellboy Animated is, in my opinion, a lot of fun, despite not having the magic and full entertainment value of Guillermo Del Toro's live-action movies. Still, we're getting more Hellboy adventures with the same cast as the original films, which gives these animated movies a ton of credibility. Both Sword of Storms and Blood & Iron have great plots and feature our favorite B.P.R.D. characters in full, but I feel like each film more or less drags and lacks more of a cohesive narrative than the live action movies. If each movie ran at about an hour, the experience would be a lot better. Still, these are fun in their own right.

The new 4K Ultra HD Blu-ray video presentations are upgrades from previous releases and the Dolby Atmos tracks add some great sound elements. Additionally, we get some new bonus content on each film the cast and crew, along with the creator of Hellboy. Recommended!

Sale Price 12.99
List Price 22.99
Buy Now
3rd Party 4.4
In Stock.
See what people are saying about this story or others
See Comments in Forum
Previous Next
Pre-Orders
Tomorrow's latest releases