Nearly twenty years later, M. Night Shyamalan's Glass finally brings his Unbreakable trilogy to a close, pitting James McAvoy, Samuel L. Jackson, and Bruce Willis into a long-awaited and ultimately satisfying showdown (though some may be underwhelmed). The superhero thriller dukes it out on the mean streets of Ultra HD with a beastly beautiful 4K HDR10 presentation, a highly-satisfying Dolby Atmos track, and a nice set of bonus features, making the overall UHD package is Recommended and a nice addition to the HDR library.

M. Night Shyamalan's Glass brings the filmmaker's Unbreakable trilogy to a close in a rather expected fashion for a drama about seemingly ordinary people with special, extraordinary abilities living amongst us. This is not to suggest the final installment to a series that was in hiatus for almost seventeen years is wholly satisfying or that it will appease a loyal fanbase that eagerly awaited its completion for the last two decades. However, the closing chapter and eventual climactic showdown is an adequate conclusion to a story that never actually promised the sort of big action spectacle typical of big-budgeted superhero flicks. In fact, the build-up and aftermath are perfectly in line with the set expectations of the previous two films, almost to the point of even been predictable since its predecessors also wrapped up their respective plots on a similar tame and moderate note. As in the other two movies, this is not about the action, but about characters with internal conflicts as well as external against one another.

In this direct follow-up, Shyamalan picks up shortly after the events of Split, bringing fans up to date on the exploits of David Dunn (Bruce Willis), the central protagonist of Unbreakable and whose unexpected appearance provided the filmmaker's usual surprise twist in that 2016 sequel. With the help of his now-adult son Joseph (Spencer Treat Clark), David has been patrolling the streets of Philadelphia and grown into a vigilante legend and internet sensation christened "The Overseer."

Unfornutately, the last near twenty years have not been kind to David. Accepting his role as a superhero has proven to be an exhaustive venture, perhaps feeling drained from chasing after petty criminals, but the possibility of capturing a murderous villain dubbed "The Horde" (James McAvoy) provides vigor and a sense of purpose to his nightly patrols. Their initial — and potentially explosive — clash where David saves a squad of cheerleaders is soon foiled — or rather undermined — by Dr. Ellie Staple (Sarah Paulson). 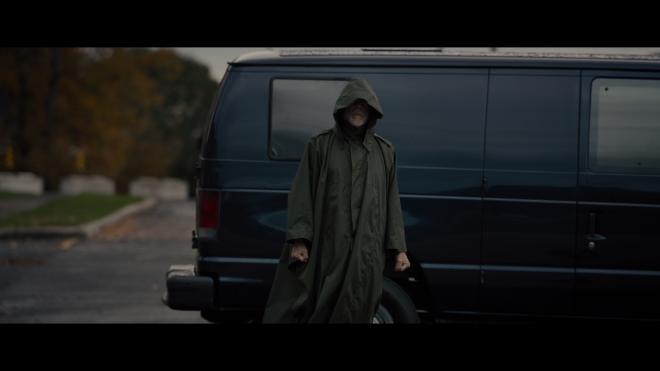 This is where Shyamalan's script takes not only an interesting turn, setting our hero's adventure in an unforeseen and bizarre direction — for the character, not those of us familiar with the previews — but also serves as a larger metaphor for the plot's underlying theme. After two movies set in our contemporary world which fantasize comic-book superheroes could be inspired by real people with superhuman abilities, science is bound to sooner or later catch up and essentially squash such fantastical notions about the preternatural. In this instance, questions about the mental health of these individuals are destined to arise, particularly in the case of McAvoy's Kevin Wendell Crumb, who suffers from Dissociative Identity Disorder. When discovering Dr. Staple has also been treating Samuel L. Jackson's Elijah "Mr. Glass" Price, whose brittle bone disease has somehow nurtured him to become a narcissistic egomaniac with supernatural intelligence, doubts further take shape and interrupt what could have been.

Granted, Shyamalan indicated a large-scale, spectacular confrontation via Mr. Glass's Machiavellian machinations, but Jackson's highly-intellectual supervillain has always been established as a highly-skilled manipulator, the man behind the curtain pulling the strings with a talent for diverting suspicions. And that initial fight in the first act is, in effect, as much a foreshadowing to the film's final quarter as it is the plot's catalyst, making the climactic battle less important than the events leading up to it, Dr. Staple's suspicious talent for seeding doubt and the significance of the always certain surprise twist — a predictable Shyamalan staple. Frankly, the ease with which the characters struggle with uncertainty appears true to the implicit meaning of the film's title while also serving as a reminder of the story's focus, a character who arguably finds redemption in this finale. But that's a conversation for another day. As it stands, Shyamalan's Glass is a strong conclusion to an original, fascinating superhero trilogy from a confident filmmaker.

Universal Studios Home Entertainment brings M. Night Shyamalan's Glass to 4K Ultra HD Blu-ray as a two-disc combo pack with a Digital Copy code. When redeeming said code via Universal's website or Movies Anywhere, users have access to the 4K HDR10 version with Dolby Digital 5.1 audio. The triple-layered UHD100 disc sits comfortably opposite a Region Free, BD50 disc inside a black, eco-elite case with a glossy, embossed slipcover. At startup, the disc goes straight to a screen with options in the top left, full-motion clips and music.

Glass debuts on 4K Ultra HD Blu-ray with a beastly and glorious HEVC H.265 encode. The superhero drama was originally shot on the Arri Alexa camera system capable of 3.4K resolution but later mastered to a 4K digital intermediate, and the results are a mix of minor, yet appreciable, enhancement,s along with some areas that are the equivalent of its Blu-ray adversary.

For the most part, the freshly-minted transfer shows a welcomed uptick in overall definition, as the lines along buildings and city streets are fairly sharp and detailed. The stitching and threading in clothing are plainly visible, such as the fuzzy fabric of Dr. Staple's sweaters, and facial complexions appear healthy with excellent lifelike textures. But again, the jump is relatively small with a few mild soft areas and a couple of instances of faint aliasing along the sharpest edges.

The more notable improvement is the heightened brightness levels, delivering significantly richer and inkier blacks throughout. Of course, this also makes for a darker picture quality overall where the deepest, silkiest shadows tend to engulf the finest details during the poorly-lit action interiors at the beginning. Daylight sequences fair better with strong visibility within the darkest, murkiest corners. Like its HD brethren, contrast remains relatively restrained and toned down, which is faithful to the creative intentions of the filmmakers and in line with the look of the previous two installments. On the other hand, while creating a drearily grayish and overcast atmosphere, whites are nonetheless a tad cleaner and crisper with appreciably improved specular highlights, providing the 2.39:1 image with a more radiant, dazzling pop during the aforementioned daylight scenes.

Where this HDR10 presentation ultimately wins over its HD SDR counterpart is the colors with primaries, in particular, looking fuller and a tad more saturated. However, the 4K video remains true to the stylized photography where much of the action and conversations fall on the lower end of the grayscale, displaying a deliberately somber and occasionally near-monochromatic palette. The hues specifically linked to our three protagonists are a bit more nuanced and subtly complex, especially during the scenes when doubting their abilities. David is absorbed by dull teal shades, Kevin is immersed in blonde canary yellows, and Elijah is engrossed by pale lavenders. As they begin to believe in themselves again, those pigments evolve into rich emerald greens, deep golden mustards, and vibrant purple violets. Of more interest is seeing the mauve pinks, faded browns and cloudy grays associated with Dr. Staple. (4K HDR10 Video Rating: 78/100)

Glass clashes with home theaters by flexing a surprisingly muscular and an impressively stirring Dolby Atmos soundtrack. Being a dialogue-driven character study, however, the front-heavy presentation is more subtle and nuanced than what we'd expect from the typical superhero flick.

Nevertheless, the soundstage continuously feels spacious and broad with plenty of background activity filling the off-screen space while maintaining outstanding balance and convincing movement between three channels and the top heights, generating a highly-engaging half-dome environment. Imaging exhibits superb fidelity and acoustical detailing in the mid-range, affording the action with excellent clarity during the loudest segments. At the same time, vocals are crystal-clear and precise, and a healthy, robust low-end provides appreciable oomph and palpable weight to the action sequences.

The use of the surrounds can seem somewhat sporadic with several pockets of silence that are interestingly observable, meaning such moments appear deliberate since they happen while inside the institution and during therapy sessions. Still, the sides and rears are employed from time to time with various low-key ambient effects, such as voices echoing through the hallways of the hospital or the familiar commotion of a bustling city. Occasionally, such activity pans across the overheads effectively, and there are a few scenes with rain and water convincingly falling from above, creating a very satisfying hemispheric soundfield that further draws viewers into this alternate reality. (Dolby Atmos Audio Rating: 90/100)

Both the UHD Blu-ray and Blu-ray feature the same bonus content encoded in HD and standard dynamic range:

After nearly twenty years, M. Night Shyamalan finally brings his Unbreakable superhero trilogy to a close in Glass, bringing James McAvoy from Split, Samuel L. Jackson, and Bruce Willis together for a long-awaited showdown. Although that aforementioned clash may not be the sort of visually thrilling spectacular that will appease expectations or compare to other superhero flicks, the final chapter is nonetheless a satisfying conclusion that falls perfectly in line with the themes of its predecessors.

Ordinary people with extraordinary abilities duke it out on the mean streets of Ultra HD with a beastly beautiful 4K HDR10 presentation that offers several appreciable improvements over its Blu-ray counterpart. Featuring a highly-satisfying Dolby Atmos soundtrack and the same bonus materials as the Blu-ray, the overall UHD package is recommended and makes a nice addition to the HDR library.

Sale Price 8.98
List Price 22.98
Buy Now
3rd Party 4.97
In Stock.
See what people are saying about this story or others
See Comments in Forum
Previous Next
Pre-Orders
Tomorrow's latest releases