There are a lot of us – myself included – who owe M. Night Shyamalan a big, fat apology. I was a huge fan of his early work, such as The Sixth Sense, Unbreakable, and Signs, but – like many of you I suspect – slowly began to lose all interest in the director after lackluster efforts such as The Village, Lady in the Water, The Happening, and After Earth. The man who was once called the successor to Steven Spielberg seemed like another flash-in-the-pan whose rocket burned bright for a while, but burned out far too quickly. 2015's The Visit showed hints that the M. Night we knew and loved all those years ago still had a little left in the tank. And now we get Split - not only the director's best movie in more than a decade, but one that ranks right up there with his best work. Turns out that rocket had a second stage we didn't know about.

Split begins at the conclusion of a girls' birthday party where gal pals Claire (Haley Lu Richardson) and Marcia (Jessica Sula) tell Claire's father about how another girl that has been invited to the party, Casey (Anya Taylor-Joy), is a bit of a recluse. Casey is waiting for someone to pick her up, but Claire's father insists on driving her home – not wanting to leave her waiting there alone. In the parking lot, the three girls get in the car, but don't see the father being drugged to the point of unconsciousness as he's putting items in the trunk. A mysterious stranger who we'll soon learn goes by many names and many personalities (and played incredibly by James McAvoy) gets in the car, drugs the two girls in the back, and eventually drugs Casey as well when she makes a move to escape. 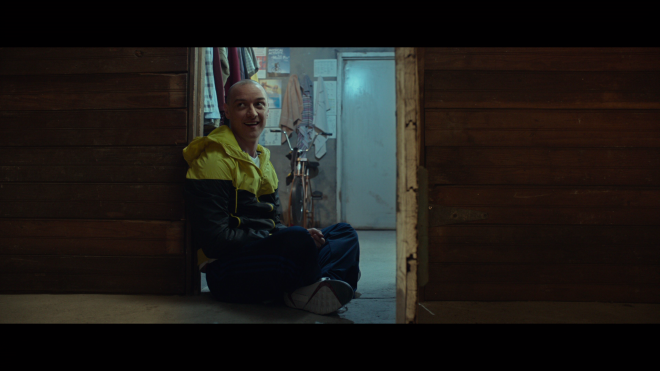 The trio is taken to the man's underground lair, where they discover he suffers from DID (or "Dissociative Identity Disorder"), with some of his personalities being quite terrifying and others being more passive and kind. Some of his identities are more dominant than others, however, and viewers learn that two in particular, a male named "Dennis" and a female named "Patricia", are really running the show. One of the other identities, "Barry", who loves fashion design, meets frequently with psychiatrist Karen Fletcher (Betty Buckley), although she is aware of the 23 personalities that he carries inside.

While Dr. Fletcher has no idea about the girls he's currently holding captive, she does become intrigued by a 24th personality that Barry, Dennis, etc., keeps mentioning: that of "The Beast", who Karen believes he has made up and doesn't exist, but who the man claims is a large and powerful master who must be served. To reveal any more about Split's story would spoil the fun, but trust me when I say that this is far more than just a simple abduction/horror story. M. Night has a much more powerful vision in mind...one whose "big reveal" will either leaving one scratching their head or flipping out with joy – all depending on your knowledge of M. Night and his other movies.

Thankfully, unlike so many other M. Night titles, the movie stands alone without the reveal at the very end (which comes after the title card, but quickly enough that viewers won't tune out before seeing it). The director could have very easily released this movie without the "twist" at all, and I wouldn't have changed my admiration for the film one iota. Going into the movie, I was worried that this would just be another typical Hollywood thriller, with McAvoy chewing the scenery and endless "scare" moments (you know the kind...where you think the killer is hiding behind the door, the soundtrack music wells up, and a cat jumps out). But it's not that at all. In fact, I don't think there's a single "scare" moment as described above in the entire movie (although it's certainly scary), and despite the villainy of McAvoy's character, he often comes off as quite sympathetic. There's a wonderful (albeit horrific) backstory to the character of Casey here too, and a connection between her and McAvoy's character (although not the one I thought the movie was going to give us, given some of the early scenes) that gives Split staying power than 99 percent of other horror/thriller movies never achieve.

In the United Kingdom, Universal Studios Home Entertainment brings Split to 4K Ultra HD Blu-ray as a two-disc combo pack with a flyer for an UltraViolet Digital Copy, which can be redeemed via UltraVioletUniversal.com but only available in HD / SDR. The dual-layered UHD66 disc sits comfortably opposite a Region Free, BD50 disc inside a black, slightly thicker than normal keepcase with a glossy slipcover. At startup, the disc goes straight to a static menu screen with music playing in the background.

EDITOR'S NOTE: the North American release of the Split 4K Blu-ray will be September 12 and you can pre-order that version HERE.

Shyamalan lets loose The Horde on Ultra HD with a great-looking H.265 encode in HDR10, sure to satisfy fans and 4K enthusiasts. However, compared to its Blu-ray counterpart, the picture quality isn't the dramatic upgrade some would have hoped for or the next evolutionary step towards realizing its true potential.

There is a nice uptick in terms of overall definition and resolution, revealing just a bit more in the facial complexions and the clothing. The veins popping out The Beast's body seem more pronounced and perceptible with a light hint of teal-blue in each. Some of the rust spots and stains in various pieces of metal throughout Crumb's underground lair are more distinct than before, and objects in the background, such as the books in the doctor's home or the random items displayed in Crumb's living area, are a tad more visible. Fine lines and the sharpest outlines are detailed and resolute, though there are a couple moments of very mild aliasing along the edge of banisters. Shot on the Arri Alexa camera system with a max resolution of 3K, this is probably the sharpest the movie could ever possible look.

Where the 4K presentation reveals a marked improvement over the SDR version is in the brightness levels. Blacks are a bit richer and more intense with better, truer shadows around the faces and in the many poorly-lit scenes, providing the 2.40:1 image with appreciable dimensionality and a more ominous atmosphere. The stylized photography doesn't allow for a wider color palette, but primaries, especially blues and reds, seem better saturated and true to life. Also, facial complexions come with a rosier, lifelike quality. Contrast appears to be on par with its Blu-ray counterpart, not looking significantly brighter. However, whites seem cleaner with a bit more of a punch and dazzle to them, such as the psychiatrist's gray hair or in the light fixtures. Specular highlights, too, are about the same though the glow from those light sources is tighter and better controlled, allowing for a bit more detailing in the brightest spots.

Still, even though the 2160p video may not show a dramatic improvement, this HDR presentation has a better cinematic quality to it and should be the preferred way to watch.

Sadly, the producers of this UHD release saw fit to only unleash The Beast with the same DTS-HD MA 5.1 soundtrack heard on the Blu-ray, which is neither bad nor anything to be thrilled about and which Shannon Nutt already wrote a great review for. Like he mentioned, the original sound design is excellent with much to appreciate but not the aural experience that would wow listeners, so I can't imagine it benefitting from jumping into an object-based format.

Much of the attention is placed on the dialogue and character interactions, delivering precise, crystal-clear vocals throughout even during the movie's most intense moments. Imaging feels wide and spacious with a mild echoing effect from McAvoy's different personalities, giving each scene inside the underground rooms a good sense of space and realism. Off-screen effects are convincing with excellent directionality and fluid movement between all three front channels. Occasionally, some of those noises are very lightly heard in the surrounds, but West Dylan Thordson's score really does much of the work. And thanks to a superb mid-range, each instrument and note comes through with magnificent fidelity and distinction. For three-fourths of the movie, the low-end is not particularly demanding or noteworthy though there is a fair amount of bass that adds weight and presence to the action. But in the final quarter, there is some appreciable, hard-hitting rumble digging just below 30Hz with a couple wall-rattling moments at around 15 and 16Hz (bass chart).

The Making of Split (HD, 10 min): Cast & crew interviews discuss the plot and characters while sharing some on-set anecdotes and working with others, all mixed with lots of BTS footage.

The Many Faces of James McAvoy (HD, 6 min): Focused on the actor's performance with praise from other members of the cast and the director.

The Filmmaker's Eye (HD, 4 min): Shyamalan is given a few minutes to explain his process and some of his creative decision-making while others also chime with gushing praise.

Shaw Has a Party

Hide and Seek with Hedwig

Maybe We Are Crazy

Rejoice! The M. Night Shyamalan you thought might never return is back with a passion in Split, one of his best movies in a long, long time. Although M. Night gives us another "twist" ending on this one, unlike many of his other films, the story isn't dependent on the twist and the movie could work just as well without it.

The Ultra HD Blu-ray comes from the United Kingdom courtesy of Universal Studios Home Entertainment with a satisfying, good-looking 4K presentation, showing a small improvement over its Blu-ray counterpart, particularly the black levels delivering a nice cinematic quality. Unfortunately, the same DTS-HD soundtrack has been ported over, along with the same set of supplements. Still, the overall package is worth checking out for enthusiasts living stateside who can't wait for the movie's U.S. release in September. For those who can wait, pre-order HERE!

Sale Price 16.99
List Price 22.98
Buy Now
3rd Party 14.97
In Stock.
See what people are saying about this story or others
See Comments in Forum
Previous Next
Pre-Orders
Tomorrow's latest releases