Ralph and Vanellope upgrade from their 8-bit reality to the world wide web in Ralph Breaks the Internet, exploring some weighty themes while on a journey of self-discovery in a fantastically entertaining, wildly imaginative fashion. The Ultra HD uploads to a gorgeous HDR10 presentation, a highly-satisfying Dolby Atmos soundtrack, and the same supplements from the Blu-ray, making the overall UHD package Recommended. (We have also reviewed Blu-ray and the 4K digital version in Dolby Vision and Dolby Atmos.)

Picking up six years after the events of the first movie, Ralph Breaks the Internet upgrades from the 8-bit video game reality of our heroes, Ralph (John C. Reilly) and Vanellope (Sarah Silverman), into the fast-paced, instant-gratification and vast global network systems known as the internet. But before entering this new world wide web of high-speed information, the two best friends chat in the power-strip station, doing some people watching — or rather, gossiping about other video game characters — and enjoying the sunrise, implying this is their normal routine since we last left the pair. However, while Ralph continues being content in his frankly banal programming — the central theme to the first movie's existential questions of finding meaning and fulfilment in the monotony — Vanellope drops hints of finally reaching that seven-year itch, growing fatigue of doing the same old same old, including winning the same racetracks she's been driving for years.

In his attempt to help his best friend, Vanellope's game Sugar Rush is accidentally broken, and replacement parts come with a hefty price on eBay, compelling the two to enter that captivating rabbit hole of boundless information. And like its predecessor, the fun and laughter come from a smorgasbord of cultural references, as seen through the naïve, childlike innocence of Ralph, and a potpourri of self-referential allusions, with the most telling and interesting coming from jabs at the House of Mouse. The sequence with Vanellope and the Disney princesses is layered with far too much to unravel in this review, but it admirably sets up a critical plot point and a splendid payoff towards the end. KnowsMore (Alan Tudyk) makes for a cute caricature of search engines, but the algorithm Yesss (Taraji P. Henson) of BuzzTube offers great insight into trending videos while Shank (Gal Gadot) of Slaughter Race deserves a crown of her own, a badass woman bringing Disney into the 21st Century. 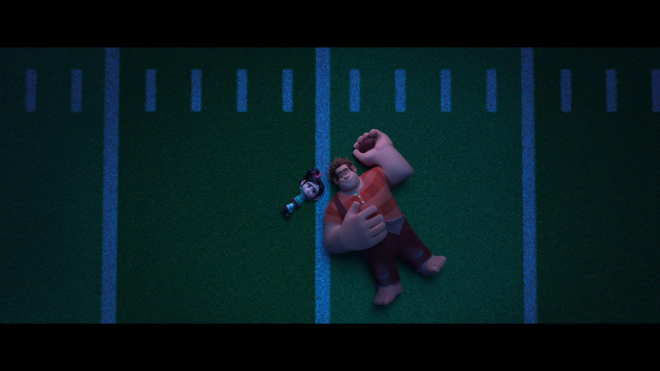 But on a more poignant and personal level, the script by Phil Johnston (Zootopia) and Pamela Ribon (author and story contributor to Moana) further expounds on the themes of its predecessor and takes them in fascinating directions. For Ralph, the internet is only a chance to correct his wrongs and return to the familiar world of the arcade, the comfort offered by predictability, the pacifying dullness of an uneventful life. Vanellope, on the other hand, is thrilled by the infinite possibilities, the excitement of reinventing herself in a place without the restrictive, preset racecourses of Sugar Rush. Despite only featuring one level of gameplay, the world of online video gaming feels both unlimited and frightening, tempting the racing princess with fresh opportunities for paving her own path whereas Ralph only sees the hazardous roads of change. And this brings out their anxieties; Vanellope glitches when feeling unsure while Ralph's insecurities infect more than just their friendship.

Admittedly, these themes are explored openly, brought to the forefront in clear, easy to decode terms — Vanellope glitches when worried about disappointing either Ralph or herself, and Ralph's insecurities are a literal virus threatening everything. Point being, Ralph Breaks the Internet could never be accused of being subtle, but how it displays these ideas and that change is a natural process of growing up for younger viewers is admirable. While visually dazzling and mesmerizing the imagination of the audience, a heartfelt plot about being a supportive friend means allowing room for growth comes to life in spectacular fashion. Others, namely Felix (Jack McBrayer) and Calhoun (Jane Lynch), experiences similar challenges when essentially adopting the childlike Sugar Rush racers, setting up a memorable jab about the trick to proper parenting every parent should hear. In the end, the animated sequel is an excellent follow-up in the adventures of Ralph and Vanellope.

Walt Disney Studios Home Entertainment brings Ralph Breaks the Internet to Ultra HD Blu-ray as a two-disc combo pack with a flyer for a Disney Digital Copy. When redeeming said code via RedeemDigitalMovie.com or MoviesAnywhere, users should access to the 4K UHD digital version in Dolby Vision HDR with Dolby Atmos. The dual-layered UHD66 disc sits comfortably opposite a Region Free, BD50 disc. Both are housed inside a black, eco-vortex case with an embossed, glossy slipcover. At startup, viewers are taken directly to the movie.

Ralph's insecurity virus breaks Ultra HD with a gorgeous, often stunning HEVC H.265 encode, making it a fantastic leap over the Blu-ray and into the worldwide web. Overall definition may not offer a significant difference between the two formats, but the animation enchants viewers with the amount of work that went into designing the stitching and threading of clothing, especially in Vanellope's sweater and socks and in Ralph's denim overalls. Later, the wildly imaginative vision of the internet is continuously busy with much happening in the background, maintaining amazing clarity of the tiny objects in the distance flying through the air, the pulsating beams of light flashing all around and the small digital 16-bit-like icons of visitors. Best demo-worthy moments take place inside the Slaughter Race where the creases in Shank's leather jacket are distinct, every imperfection and blemish in the buildings, billboards, and streets of the dingy neighborhoods are distinct.

The more appreciable improvement in this 4K transfer is the better brightness and contrast balance even though the upgrade seems rather moderate compared to is HD peer. In fact, much of the picture, especially dimly-lit interiors such as the bar in the Tapper game, are noticeably darker overall. However, visibility within the darkest corners remains excellent, revealing the smallest object and detail in the background, while the enhanced specular highlights are notably perkier and more dazzling, exposing the tiniest aspects within the brightest, hottest spots, such as the glow of neon lights and explosions. The mesmerizing visuals come to life by radiantly crisp whites, and the action is bathed in richer, silkier blacks with superb gradational differences in the various shades, providing the 2.39:1 image with a fantastic three-dimensional quality and a lovely cinematic appeal.

Not surprisingly, the CG-animated sequel is continuously upbeat and delightful, even during the plot's more somber second half, thanks to an ecstatically lavish array of secondary hues. When wandering and exploring the internet, the HDR10 presentation is showered with an impressive selection of soft pastels, from the minor hints of glowing pinks in the sky and the soft flamingo shade of Double Dan to the vividly striking fuchsias of BuzzTube. Added to that, the wide gamut of blues is near hypnotic, from the light, dreamy cerulean of the sky and the arctic sapphire of the light beams to the more greenish teals of other areas and the way Yesss radiates a variety of electrifying blues. The inside of Slaughter Race is strikingly captivating, bathed in elaborate yellows, warmly rich ambers and fiery marmalade oranges, making the action with explosions total demo-worthy material. The Disney princesses swim in a gorgeous parade of primaries that also make the sequence pure eye candy. (Video Rating: 92/100)

Ralph and Vanellope browse the world wide web with the search engine speed of a smashingly outstanding Dolby Atmos soundtrack, offering an excellent, pulsating upgrade over its DTS-HD counterpart.

Almost from the start, the surrounds are employed while our pair of insecure heroes hang out in the power-strip community. The commotion of other video game properties moves between the screen and sides to create a lively and active environment. This only gets better when visiting the internet search hub, as voices echo all around, digital beeps bounce from one speaker to the next, and icons travel from one side of the room to the other with flawless panning. Occasionally, some of those atmospherics fluidly travel across the overheads with amusing effectiveness, particularly the action sequences inside the Slaughter Race game or in the second half. The object-based design is not always consistently immersive, but it has its moments, generating a fairly strong but ultimately satisfying hemispheric soundfield.

Quieter, more dialogue-driven sequences are precise and well-prioritized amid an energetic, overflowing soundstage. Displaying superb distinction and separation within the midrange, imaging continuously feels broad and spacious as various ambient effects convincingly move between the front channels and into the top heights, creating an expansive half-dome effect. Henry Jackman's score also displays plenty of warmth and fidelity while lightly bleeding into the sides and heights. The low-end doesn't always come with the sort of punch the visuals would imply, but bass is nonetheless robust with a sturdy, palpable weight in the music and action. (Audio Rating: 86/100)

The accompanying Blu-ray contains all the supplements.

Six years after the events of the first movie, Ralph and Vanellope are uploaded to the world wide web in Ralph Breaks the Internet, expounding on the themes of its predecessor with issues about insecurity and anxieties in the digital realm of high-speed information. Although a few moments can feel somewhat weighty for younger audiences, the filmmakers take our heroes on a journey of self-discovery is fantastically entertaining fashion while dazzling the imagination. The 4K Ultra HD Blu-ray arrives with a gorgeous HDR10 presentation offering a welcomed upgrade over its Blu-ray counterpart, accompanied by an excellent and highly-satisfying Dolby Atmos soundtrack. The same set of supplements can be enjoyed on the accompanying Blu-ray, making the overall UHD package Recommended.