One of the most beloved Batman stories has finally come to the DCU in a brand new animated movie called Batman: Hush. The film launches onto 4K Ultra HD Blu-ray with an upgraded 4K HDR10 video presentation, a boisterous DTS-HD MA 5.1 audio mix, and some informative bonus features, even if they don't all relate to the main feature at hand. I'm shining the Recommended signal high in the sky for this release. 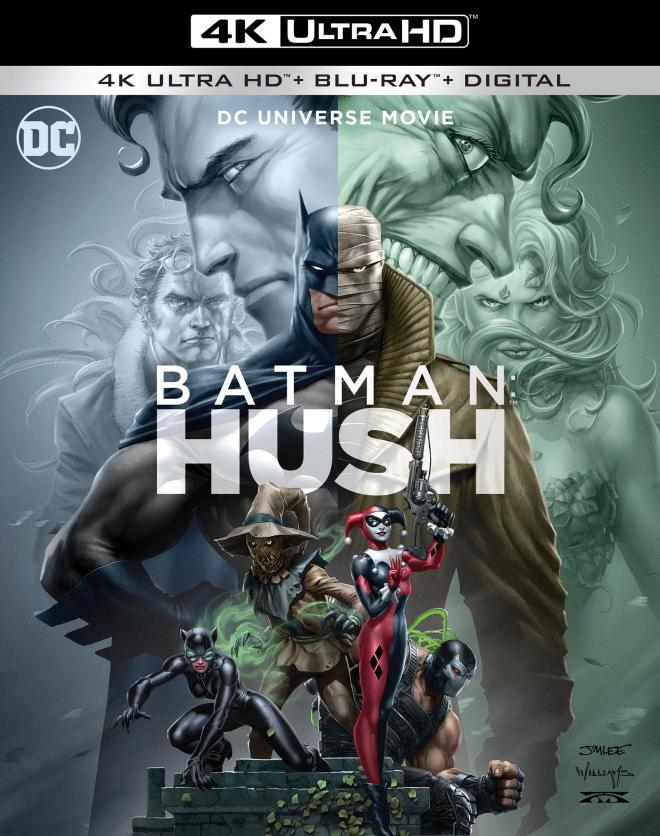 DC Entertainment and Warner Bros. show no sign of slowing down their output of comic book films as Batman: Hush swings into action for the first time. The story takes its cues from the 2002-2003 mega-hit comic book arc called "Hush," which was printed in Batman issues #608-619 by comic icons Jeph Loeb and Jim Lee. Due to the universal acclaim for this story, it's surprising that it's never been made into a live-action movie, but alas, we now have an 82-minute animated feature that follows the original pages close enough for both hardcore and casual fans.

The narrative itself is tightly packed and multi-faceted with a ton of DC characters running amok, including a mysterious new character called Hush. This peculiar person is barely seen and is always somewhere near a series of violent atrocities. Not only are the usual villain suspects abound, but Hush also focuses on a Batman/Superman angle as well as a biting romance between Batman and Catwoman. Batman buffs should be satisfied with this long-awaited adaptation despite a couple of its flaws.

Throughout the movie, Batman is taking it from all corners and he doesn't know who to trust or who's who anymore. After a near-death experience that leaves him with a fractured skull, Batman figures out that someone is controlling the unwilling villains in Gotham, causing super violent crimes in and around the city. In each crime scene photo, Batman notices a strange person with bandages covering their face. When he confronts one super-villain, they seem to be under a spell and acting out-of-character for their heinous acts. This takes Batman on a thriller noir journey to uncover who is behind these crimes which seem to be focused on taking out the Caped Crusader and his real-life persona Bruce Wayne. In addition, we see a romance spark between Batman and Catwoman, where Batman wants to reveal his true identity but, in the end, the contrasting ethics and morals between the two love-birds can only bring them so far.

Batman: Hush takes a few of its own liberties with characters and storylines that don't exactly shadow the comic book, especially the climax and reveal, which might upset some enthusiasts. But for me, it works well here within this animated DC Universe, which is going on 14 films at the moment. The story is brutal and serious, unlike the recent light-hearted and comical Batman vs Teenage Mutant Ninja Turtles. Hush is a different beast all together where more is at stake and a brooding romance keeps you on your feet. Jason O'Mara delivers Batman's dialogue with grit while the rest of the voice-overs do their job well enough but can come across flat. There are some wonderfully animated sequences that pay perfect homage to the comic book splash pages and the score seems grand in scope for the story presented. Batman: Hush is a beloved story to many readers and this DC film does more right than wrong. 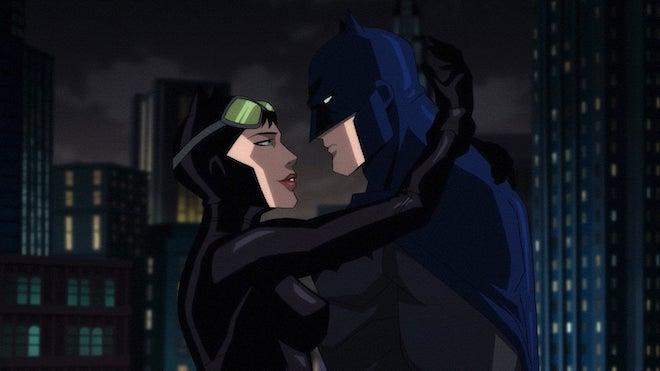 Like most DC animated movies in the 4K UHD format, there doesn't seem to be a need for such a high-end video presentation with HDR encoding. The animation isn't highly detailed and the color palette is somber and dim. That being said, even with the film's uncomplicated visual approach, there is a slight uptick in black levels and brighter colors that best the Blu-ray transfer. Again, this is a dark and murky creation, with most characters creeping up in the dark or low-lit alleyways.

The HDR enhances some of these vague details, enabling them to stand out clearer. For instance, brick buildings and scattered objects in shadowy backstreets look more distinguishable with animated lines that would otherwise be more difficult to see. The muscles in Superman and Batman's suits are more defined as well thanks to the upgraded HDR encoding which brightens the small differences in shades of blue and black. The neon signs and harsh glow of Poison Ivy's green plant really illuminate the screen nicely, which gives it a haunting effect of something going awry.

Most of the time though, we are treated to various dark blues and blacks with the occasional facial colors on each character. This transfer is upscaled from 2K, but it's still a worthy improvement that leaves out some of the harsh banding that I noticed on the Blu-ray version. Batman: Hush might have an underlit visual tone, but with the help of the 2160p transfer and HDR, it's an optical delight. 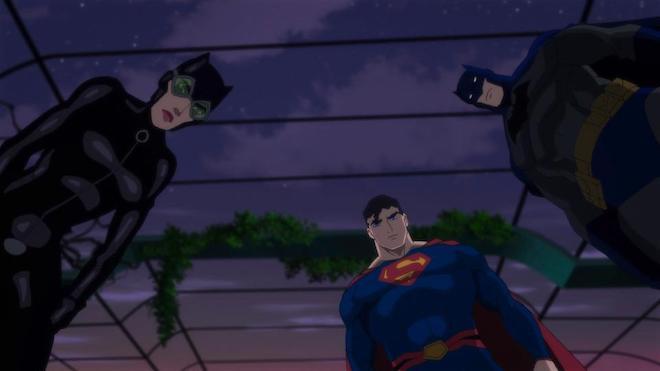 Batman: Hush includes an excellent lossless DTS-HD MA 5.1 soundtrack on both 4K and Blu-ray Discs. I can only imagine that if there was a Dolby Atmos option, then this may have even been a demo worthy audio track.

Most DC animated movies deliver only a serviceable audio mix, but all the stops have been pulled out for this adventure with excellent sounding effects. Gunshots and explosions are healthy without being overly done. They also come packed with heft as the bass steams up the low end with a nice rumble. Even the sound of engines revving and punches have a satisfactory kick, where you'll feel the force of each blow.

Outdoor atmospherics sound off nicely as well with resident commotion, screams, steam escaping buildings, and more. Each sound is nuanced and well-balanced through the rear speakers. Dialogue is cleanly presented with zero audio dropouts or issues. The directionality of the voices off-screen is wonderful, along with bullets flying seamlessly from one speaker to another. The score is lively and loud with an impressive presence that always adds to the epic tone of the movie.

Altogether, this lossless DTS-HD MA 5.1 track is one of the best sounding mixes in the DC animated universe. It has large, explosive moments, while at the same time giving way to smaller and quieter dialogue with necessary echoes and whispers. What a treat this was to listen to. 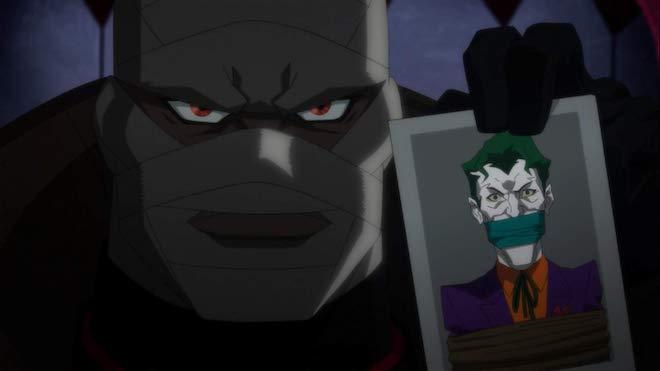 Warner Bros. delivers several extras totaling 72 minutes, including a commentary track and an overview of the romance between Batman and Catwoman. The other four bonus features, however, have nothing to do with Hush itself. 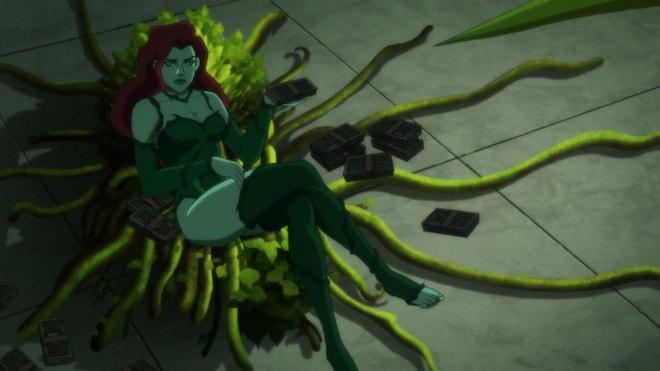 Batman: Hush is a true fan favorite amongst comic book readers, and now that it's an animated film within the DCU, Batman addicts can rest easy for the time being. The story follows the comic book for the most part, but it does stray in some immense ways to keep order in the established movie universe.

The 4K Ultra HD Blu-ray has nice upticks in color that provide ample detail in the animation. If you have a 4K setup, this is certainly the version to purchase. The DTS-HD 5.1 audio track sounds wondrous and powerful too. There are several extras included, but most of them are not connected to the film. Still, they are worth checking out. Recommended!