I'm not quite sure why it took this long to get these two iconic superhero worlds together, but here they are and I'm happy to say that Batman vs Teenage Mutant Ninja Turtles is the absolute pleasure we've been looking for from DC Comics. The movie debuts on 4K Ultra HD Blu-ray with a more colorful and detailed 4K HDR10 video presentation, the same great DTS-HD MA 5.1 audio mix, and a couple of worthwhile bonus features. Highly Recommended and Cowabunga! 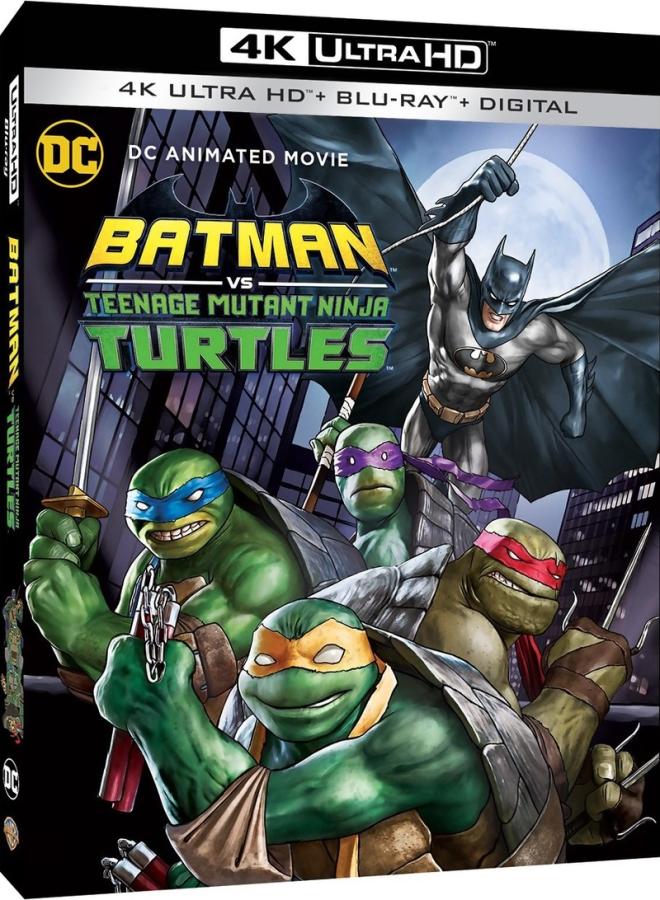 Batman vs Teenage Mutant Ninja Turtles is the latest vehicle in the DC animated universe and, dare I say, the most fun yet. Based on the comic book miniseries, the caped crusader of Gotham and the four green ninjas in a half shell team up for this fast-paced action-adventure film that is sure to satisfy fans of both universes.

Judging by the title alone, you might get a whiff of foul air and compare it to Batman v Superman, but that's definitely not the case. And given the sheer number of characters, a story like this could quickly become convoluted, but writer Marly Halpern-Graser weaves a tight script that never strays from its main objective.

Set in Gotham City, Batman and the Ninja Turtles each set out to find their respective arch nemesis, but end up crossing paths in a hilarious combat sequence that shows us Batman is in charge. Both sides quickly realize they are on the same side and team up take out The Shredder along with familiar Bat Baddies, Ra's al Ghul, Mr. Freeze, Poison Ivy, Harley Quinn, and even The Joker.

What works so well here is interactions between the turtles and Gotham's finest heroes and villains. On one hand, you have a serious Batman and Batgirl, who work tirelessly to protect their people and their city. On the other, you have the charming and comical Teenage Turtles, who are in awe of Gotham City and, of course, all of the Bat Toys. In one early sequence, Michelangelo geeks out on Penguin's violent umbrella, whereas Donatello can't get enough of the Batcave and Batmobile. It was very amusing and seemed to fit right into this mixed universe.

Despite the movie's PG-13 rating and abundant comedy, it has its fair share of deadly decapitations and head-shots. So, while it can be violent for the adult crowd, fantastic funny moments balance the tone. DC Animated fight sequences are often quite choppy and repetitive. However, this film's action sequences feature fun and outstanding fight choreography that flows smoothly and feels original.

The filmmakers also do a bang-up job serving super fans of both universes, dropping in easter eggs as well meta-commentary about the DC Universe itself. And, I loved how writer Marly Halpern-Graser and her collaborators perfectly mix Batman and the Turtles' unique personality traits and fighting styles. It's hard to believe the Turtles haven't done business in Gotham or elsewhere before. Finally getting to witness both Batman's somber attitude fuse with the Turtles' teenage angst and humor is something I never knew I needed, but am now grateful to have. Check out the scene where Batman is trying to figure out a troublesome crime at a restaurant while the Turtles debate pizza toppings; the interaction is priceless.

Thanks to its sense of self-awareness, kickass action, and overall fun factor,  Batman vs Teenage Mutant Ninja Turtles will have you yelling Cowabunga before the day is out. It might even be my new favorite pick in the DC Universe thus far. Let's just hope they put the sequel lights up on this remarkable new team-up.

I've always wondered why Warner Bros. and DC release their animated films on the 4K UHD format. Don't get me wrong, I'm glad they do, but DC's distinctive animation style is a bit more simplistic in terms of motion and textures. In other words, the source material isn't exactly 4K demo material. Batman vs Teenage Mutant Ninja Turtles battle their way onto 4K with a 2160p HEVC encode framed in the 1.78:1 aspect ratio and featuring HDR10 grading. In comparison to the Blu-ray, you can expect a slight uptick in background details as well as a minor color gamut boost.

Gotham's stone, metal, and brick buildings look cleaner in this presentation, with better textures on walls and floors. You can also see more of the Batcave and even explosion debris flying through the air. However, character faces and costuming remain as flat and smooth as the Blu-ray's presentation.

Shadows and black levels are strong, while the animation lines are flawless, even in the more action-packed scenarios. Nothing is blurry or murky here. There is a small amount of banding with certain camera pans, but it doesn't last long enough to make a big impact. Other video issues are non-existent, which leaves this 4K HDR10 video presentation as the most exciting and appealing of all the DC animated films we've seen on this format. 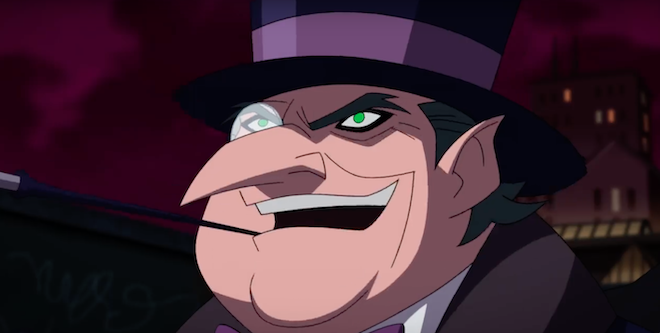 Like most DC animated films, this audio mix does its job well, but can only go so far. For example, there are sequences with the Batmobile and the Turtle Van zooming through city streets, engines revving as they dodge exploding missiles and attacking foes. This mix engages surround and rear speakers, immersing listeners in the action. I also loved hearing Batman's utility belt devices and the Turtles' more historical weapons flying across the screen and my living room. The sounds effects are well-defined and balanced. But I needed more from the low-end. For instance, the bass never achieves a high level of rumble during a high-speed chase sequence, where vehicles are zooming by and other weapons are being discharged. There should have been a balanced low end with all of these explosive noises.  In other words, this track ain't fit for a Michael Bay movie, but the LFE and bass kick in where it counts.

Other highlights include the necessary reverb and echo when our superheroes are in large spaces such as the Batcave. You'll be able to hear the stable acoustics in these sequences. The surround speakers also give a healthy variety of background chatter and other environmental sound effects that are robust.

The score always adds the necessary suspense and even comical angle to each storyline and the dialogue was clear and easy to follow along with on top of every other sound effect and musical cue. The voice performances are solid and bring that emotion to every scene with Michelangelo standing out as the best and most lively comic relief.

Overall, this lossless DTS-HD MA 5.1 mix has a great and upbeat vibe to it, which has constant sounds flowing through the rear speakers and a well-rounded dialogue track, however, the low end never rises to the occasion.

Warners includes about 45 minutes worth of bonus materials, but most aren't even related to this particular production. There are two informative looks at the making of the film, which are worth your time, and a lengthy trailer for the upcoming DC animated film. There could have been some better and more entertaining extras here.

Batman vs Teenage Mutant Ninja Turtles is perhaps the most fun DC film in both live action and animated realms to date. The story, characters, and their interactions are infectious and conjure up pure joy. I have no doubt that fans of both franchises will fall in love with this new team-up and be clamoring for more. Let's just hope DC listens.

The 4K Ultra HD Blu-ray has genuine upgrades in detail and color, but it's not a large uptick. The DTS-HD 5.1 audio mix sounds wonderful as well. There are only a couple of extras on the disc related to the film, but they are worth your time. Highly Recommended!

Sale Price 22.69
List Price 29.98
Buy Now
3rd Party 18.1
In Stock.
See what people are saying about this story or others
See Comments in Forum
Previous Next
Pre-Orders
Tomorrow's latest releases