(We have also reviewed the Blu-ray.)

Part of the brilliance of Steven Spielberg's Schindler's List is in the title itself. Changed from the book Schindler's Ark, on which the film is based, calling it List is subtler and more ambiguous, removing religious connotations that would otherwise create certain expectations, particularly towards the conclusion. The word also imagines something more immediate, tangible and concrete, envisaging in audiences a larger dramatic scope that's somehow connected to a piece of paper cataloging a series of names. Ben Kingsley's lowly accountant Itzhak Stern later describes it as an absolute good and a symbol for life, and the blank margins are the abyss, implying the empty space and relative closeness between life and death for each person's name.

But before we reach that point and its significance, Spielberg takes us through a gut-wrenching and harrowing journey of suffering, fear, and a constant struggle for survival — which in essence, visualizes Stern's later comments as a very small, narrow space. The film begins in color while observing a Shabbat service prayer, a family standing around a dinner table surrounded by natural sunset lighting. The scene is not only meaningful in and of itself, but also ironic since it marks the beginning for the day of rest. And as we're about to find out, the story is anything but peaceful. It's an emotionally devastating motion picture experience unlike any other, and the prayer is almost as if in remembrance for the survivors and the lives lost, those of which we are about to witness on screen.

On a deeper level, the sequence is significantly important to the film's overall effectiveness. As the picture is suddenly drained of color, the two candles on the table continue to burn brightly and warmly. When they finally reach the bottom and lose their flame, we're left with a billowing smoke that extends into the heavens. A sense of hope and the shimmer of life seems to also burn out with the candles because what we're about to watch is ugly, painful, and nearly unbearable. The metaphor resurfaces much later towards the end when Oskar Schindler (Liam Neeson) gives Rabbi Lewartow (Ezra Dagan) permission to observe a Shabbat service. The candles are the only source of color — and hence, life — and they become symbolic of a hope regained and a will to live in peace. 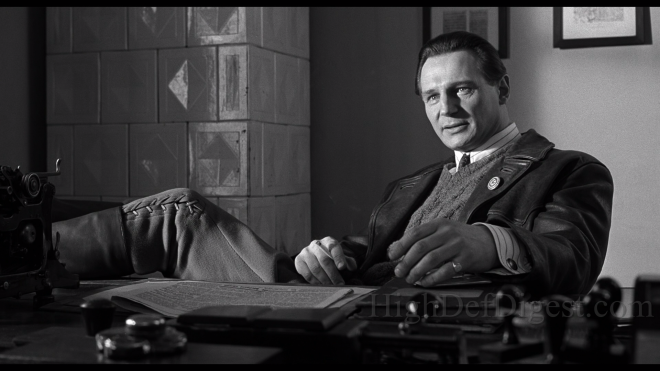 The cinematography was done by Janusz Kaminski, and Schindler's List marks the beginning of his long-time collaboration with Steven Spielberg. By shooting primarily in black-and-white, Kaminski seems to have gained a certain liberty with the camera, and he appears to really enjoy this new sense of freedom, utilizing shadows and precise lighting schemes in strikingly beautiful and highly-stylized ways. The plot, as poignant and expressively somber as it may be, is made to feel cold and distant, truer to life than scripted and artificial. From a dramatic standpoint, only Jewish blood is really ever seen flowing, splattering and spraying everywhere, and it's the same color as everything else, the same blackness as their clothes and the shadows they're made to hide in. The visual scheme seems horrifyingly reminiscent of the camp prison uniforms.

Taking it further, the photography works towards characterization as well, making clear representations of the inner conflicts of characters or their lack of moral standing. Neeson's Schindler is shown at the beginning with a confident, ambitious glow thanks to a vivid, plentiful light source, but as the story grows darker, so does his personality. His face and body are often shown with more shadows, prompting dark, gloomy banter with Schindler — his face half covered in obscuring shadows — bribing the Auschwitz camp commander. Then, there's the film's most haunting image of all: the little girl in red, suggesting the final spark of life and that which affects Schindler the greatest. The most stunning sequence, for me, is the frightening conversation between Amon Goeth (Ralph Fiennes) and Helen Hirsch (Embeth Davidtz), which demonstrates Kaminski's talent best.

For Steven Spielberg, Schindler's List is not only a very personal and trying production because of his own cultural investment and interest, but it's also a momentous turning point in his filmmaking career. The 186-minute epic shows a kind of maturity and gravity not seen in his work prior to this historical drama, which is not to say they are any weaker by comparison, only that here, Spielberg does away with his familiar approaches and style for something grittier and more genuine. Making it feel more like a documentary and spontaneous, he also does something very unusual: he doesn't shy away from nudity and shocks his audience with graphic, realistic depictions of violence. He doesn't want us to look away, so each display is sudden and unexpected, making the suffering and distress of the people who actually live it that more disturbing and upsetting. What Spielberg achieved in Schindler's List is a magnificently affecting piece of film art, which will continue to be cherished and admired as arguably one of the greatest achievements of American cinema.

Universal Studios Home Entertainment brings Steven Spielberg's Schindler's List to 4K Ultra HD Blu-ray as a three-disc combo pack with a Digital Copy code, which can be redeemed via Movies Anywhere, giving users access to the 4K Dolby Vision version with Dolby Atmos audio. Said code is part of a pamphlet with a few words from the USC Shoah Foundation, thoughts on the film by Steven Spielberg, and a breakdown of the special features. The triple-layered UHD100 and Region Free, BD50 discs sit comfortably on opposite sides of a center spindle while another Region Free, BD50 disc is on the last panel. All three are housed inside a black, eco-vortex case with an attractive, lightly-embossed slipcover. At startup, the disc goes straight to an interactive menu screen with the usual options along the left side and music playing in the background.

Schindler's List serves as a prime example of what the HDR format is truly capable of when giving Hollywood classics the 4K makeover. Reportedly, the original 35mm camera negatives were remastered and restored for a brand-new 4K digital intermediate, which was supervised and approved by Steven Spielberg. Compared to its 2013 Blu-ray release, this freshly-minted transfer reveals a bit more detailing, making every grain in the wood, stretch of barbwire and bolts in the press machines crystal-clear. Fine lines in the stitching of clothing are distinct, and every wrinkle, pore, and blemish in the cast come with lifelike textures and clarity. However, the difference between the two versions, in terms of overall definition, is rather small, as there are several moments of softness that are inherent to the photography. Still, the difference is nonetheless appreciable and a very fine layer of natural grain washes over the 2160p picture, giving it a lovely film-like appeal.

On the other hand, the real win of this Dolby Vision HDR presentation is the improved contrast and brightness in Janusz Kaminski's cinematography. The gorgeous black-and-white photography benefits splendidly from richer, inkier blacks with excellent gradational differences between the various shades in the clothing and in the polished leather belts and boots of uniforms. The hauntingly striking imagery is often bathed in velvety, ebony shadows that penetrate deep into the screen, providing the 1.85:1 image with good dimensionality and strong delineation within the darkest corners. The upgrade also displays crisper, more intense whites in some articles of clothing, making the sight of black blood all the more dramatic and striking. Specular highlights enjoy a welcomed boost, showing better detailing within the brightest spots, allowing the light to glisten off faces, metallic objects and watery surfaces with a realistic splendor and glow. And finally, the Girl in Red's jacket comes in a slightly deeper, crimson shade, making this home video edition a beautiful presentation. (Video Rating: 84/100)

As much as listening to the classic historical drama in the latest and greatest audio format is greatly appreciated, the Dolby Atmos soundtrack isn't much of an upgrade over its DTS-HD MA counterpart, unfortunately. In fact, there are certain aspects of this new high-rez mix that actually make it less satisfying, starting with some unnecessary tampering. The original design has always been a front-heavy presentation with the majority of the action occupying the screen. However, several sound effects have noticeably been repurposed and forced to occupy the height channels. The most notable example of this is the liquidation of the ghetto sequence when soldiers raid the buildings and empty suitcases over the balcony. The new Foley effects are gaudily employed and loudly localized, creating a distractingly artificial soundfield while lacking discreteness. On the other hand, a few atmospherics make better use of the surrounds, generating a better and more convincing sense of space.

The best aspect of this object-based track is the soundstage, displaying outstanding balance, fidelity and warmth from beginning to end. John Williams' understated yet compellingly emotional score markedly enjoys the extra breathing room, occasionally bleeding into the top heights and creating a hauntingly engaging half-dome environ that's continuously engaging. The mix also exhibits a tad more detailing in the mid-range with terrific instrumentation and distinction between the various sounds. Though not very commanding, the low-end is responsive and just weighty enough to provide the few bits of action with a strong presence, which is appropriate for a character-driven drama. Dialogue and whispered conversations are precise and distinct throughout, but taking into consideration a few objections with the repurposed audio effects, the new mix is unfortunately unsatisfying. (Audio Rating: 74/100)

The same set of supplements from the 2013 Blu-ray are joined by a pair of new featurettes and only available on the second Blu-ray disc.

Marking a significant turning point in the filmmaking career of Steven Spielberg, Schindler's List is a harrowing, gut-wrenching motion picture experience unlike any other. With stunning cinematography by Janusz Kaminski, the film's story of survival and one man's heroic efforts to save lives features excellent performances from Liam Neeson, Ben Kingsley, and Ralph Fiennes, leaving audiences with several poignantly haunting images of humanity at its best and its worst. Universal Studios commemorates the production's 25th Anniversary on 4K Ultra HD with a beautiful Dolby Vision HDR presentation that offers a few appreciable improvements over its Blu-ray counterpart, but the Dolby Atmos soundtrack, on the other hand, feels artificial thanks to some unnecessary tampering of the original sound design. The same set of supplements as before are joined by a pair of new featurettes, making the overall UHD package worth a look for hardened fans.

Sale Price 17.99
Buy Now
3rd Party 17.99
In Stock.
See what people are saying about this story or others
See Comments in Forum
Previous Next
Pre-Orders
Tomorrow's latest releases