The Wachowski siblings plug back into the digital simulated reality they created and fall deeper into the rabbit hole of problematic philosophical questions with The Matrix Reloaded. Fifteen years later, the follow-up remains just as condemned and undervalued as when it originally released, but frankly, it's an enjoyable thinking person's action flick. Celebrating its 15th Anniversary, the sequel is reloaded to home video on 4K Ultra HD with a fantastic Dolby Vision HDR presentation and a highly-satisfying Dolby Atmos soundtrack while porting over the same set of bonus features, making the overall package is Highly Recommended.

So few sequels are equally condemned and undervalued as The Matrix Reloaded, the direct follow-up to a massively popular sci-fi mind-trip that set very lofty expectations in the imaginations of loyal, cult-like followers. And when it really comes down to it, no matter what the Wachowski siblings did in the next adventure of Neo (Keanu Reeves) and his merry band of cybercriminals was probably ever going to meet or satisfy those expectations. Many felt the conclusion of the first movie promised an all-out war against the machines subduing humanity, a war that would ultimately bring the complete shutdown of a simulated reality program that farms humans as an energy source. Instead, what we're given is a story that sees Neo falling deeper into the rabbit hole, revealing a far more complicated system, one that opens the floodgates of deeply-problematic abstract ideas and allusive philosophical questions. And frankly, that's where audiences fail to appreciate the brilliance of the sequel.

Beyond Neo's heroic speech in the closing moments, there was never any actual promise of salvation in future installments, only the belief and faith that liberation from the control of the sentient machines is a possibility. As the Oracle (Gloria Foster) puts it, it's a matter of choice to believe the possibility is real and even attainable, which then leads to a feeling of purpose and constructing meaning to one's existence, as displayed by Agent Smith (Hugo Weaving). And that's precisely what Reloaded seeks to explore from the onset. Following in similar vein to its predecessor, Neo falls deeper into the rabbit hole of this wacky, absurd digital wonderland, discovering choice is ultimately an illusion when encountering the Merovingian (Lambert Wilson), a very familiar but troubling concept in philosophy. When he confronts the Architect (Helmut Bakaitis), the creator of the Matrix, the program's unnecessarily dense, puzzling and grandiose speech only serves to confirm that fundamental truth of reality. 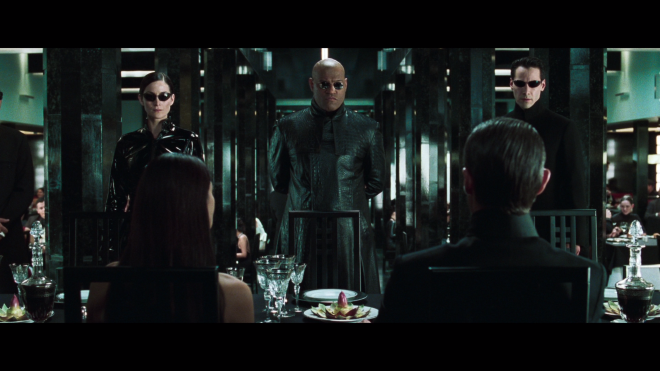 Warner Home Video unplugs The Matrix Reloaded to 4K Ultra HD as a three-disc combo pack with a code for a Digital Copy. Said code can be redeemed via WB.com or Movies Anywhere, unlocking the 4K Dolby Vision version with Dolby Atmos audio on available streaming services. The triple-layered UHD100 disc sits comfortably opposite a Region Free, BD50 disc, which sits atop a BD25 disc containing all the special features, and all three are housed inside a black, eco-cutout case with a glossy, lightly-embossed slipcover. At startup, viewers go to a generic static screen with the usual options along the bottom. 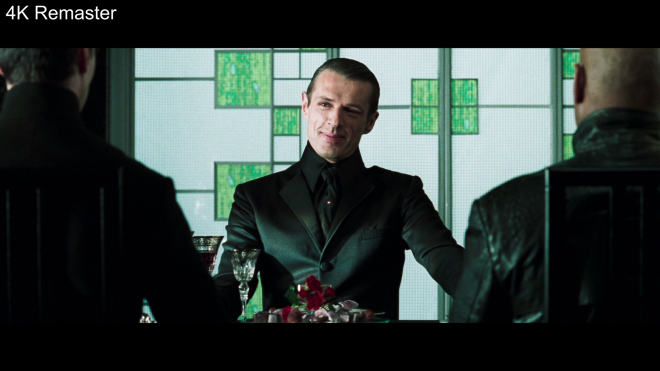 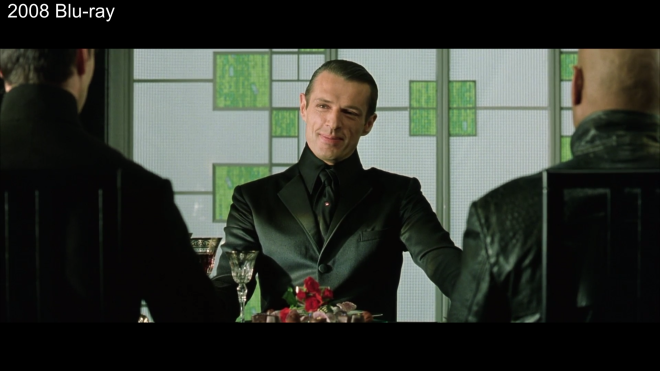 The sci-fi action sequel receives an awesome upgrade and new lease on life when being reloaded into the Ultra HD system. Equipped with a fantastic and occasionally stunning HEVC H.265 encode, which was struck from a reportedly fresh remaster of the original camera negatives and approved by cinematographer Bill Pope, the new 4K transfer boasts sharper definition and better clarity than its Blu-ray predecessor. Viewers can better make out the threading of the rough, coarse, gunny-sack-like clothing of the real world versus the elaborate stitching in the glossy latex outfits worn in the Matrix. The fine lines of ships, the pipes of the sewer system and intricate pieces of every machine are distinct while every object in the background is plainly visible.

Also, brightness levels enjoy a noteworthy boost, delivering significantly deeper and more velvety blacks, which are immediately apparent in the clothing and vehicles. Unfortunately, there a couple of times when they are so rich, they nearly reach the point of crushing the finer details of those aforementioned objects. Nevertheless, detailing remains strong in the silky midnight shadows showering the darkest, murkiest corners, providing the 2.39:1 image with appreciable dimensionality and a lovely cinematic appeal. Although Pope's heavily stylized cinematography noticeably restrains contrast, the 2160p video is considerably brighter, delivering sharply crisp and resplendent whites that push peak luminance without blooming or washing the finer aspects. In fact, specular highlights supply the edges of various metallic objects with a radiant, brilliant glisten while the brightest, hottest areas, like explosions or electrical surges, maintain extraordinary clarity and a sparkling, eye-popping glow.

Interestingly, given Pope's photographic style and the movie's history on home video, the heavy green filter fans have grown accustomed to has been toned down for UHD, which was also a surprising change in the first Matrix release from earlier this year. Frankly, the new look feels more faithful to what was originally seen in cinemas, which is not to say the green tint has been completely removed. The Dolby Vision presentation is still bathed in an emerald-shamrock greenish hue when inside the Matrix while the real world is a drab, grayish cold reality, and it maintains this look without also muting the other primaries, displaying radiant, deep reds and electrifying, animated blues throughout. Secondary hues can feel somewhat limited, at times. However, the picture is occasionally sprinkled with purple magentas and a few sparkles of pink, mostly in scenes set in Zion, while explosions dazzle the screen with spirited fiery oranges mixed with golden marigold yellows, and the highly revealing facial complexions appear rosier and more natural throughout. (4K Dolby Vision Video Rating: 92/100)

As they did on The Matrix release, Warner Bros. also offers a brand-new Blu-ray that's exclusive to this Ultra HD package. Featuring a fresh AVC MPEG-4 encode — the original BD came with a VC-1 encode — the HD presentation comes with a few appreciable improvements but also some questionable changes. It's pretty clear from the onset the video was made from the 4K remaster used for the UHD, displaying many of the same alterations made during the HDR process.

Most apparent is, as mentioned above, the familiar green filter of the Matrix world noticeably being toned down, but now, that greenish hue seems to alternate from scene to scene, looking heavy one moment but near-faded another. Still, primaries are full-bodied and richly-saturated, making the movie seem fresh and reanimated, but secondary hues appear about the same although flesh tones are a tad richer and more natural. Also, the overall picture is much sharper with significantly improved clarity and detailing in most scenes. Objects in the background and in the far-distance are well-defined and plainly visible while also showered in a thin, fine layer of natural grain, giving it a welcomed, lovely film-like appeal.

Where we encounter issues seems related to the source being mastered for the Dolby Vision HDR presentation. Contrast runs much hotter than its 2008 BD counterpart, which makes for a brighter video, to be sure, but occasionally blowing out whites in a few spots, such as the conversation with the Architect. At the same time, brightness levels are unmistakably skewed, at once delivering darker, richer blacks in the clothing and various objects but there are minor instances of crush in some areas. And oddly, there are also scenes that appear faded with somewhat dull, murky shadows. Compared to the original release, this presentation is an improvement, but it's not without its flaws. (HD SDR Video Rating: 78/100) 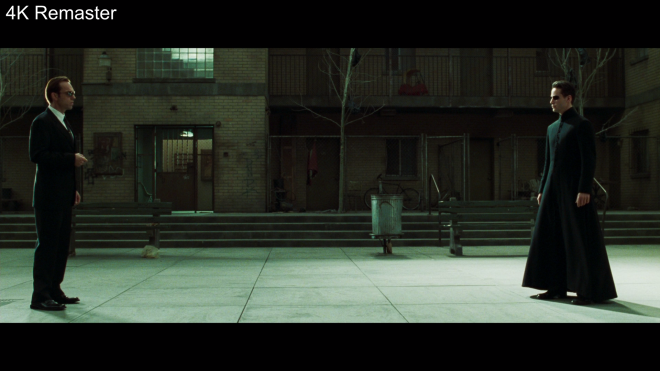 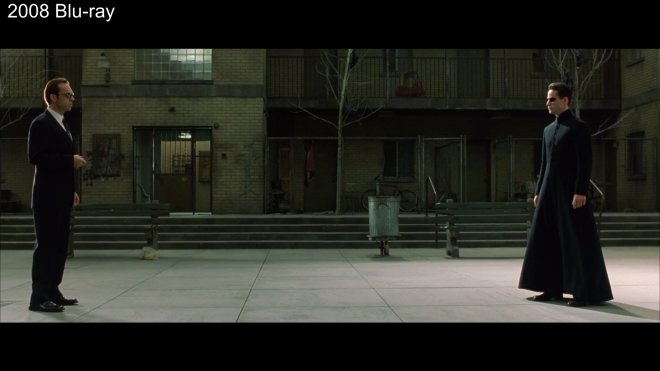 Accompanying the awesome video is a sensational Dolby Atmos soundtrack that may not completely blow its Dolby TrueHD predecessor out of the water but offers plenty of noteworthy improvements for fans to enjoy. For much of the runtime, the design occupies the surrounds with a variety of effects discretely panning throughout the room, generating a highly satisfying 360° soundfield. The freeway chase sequence is a prime example where Trinity and the Key Maker race between speeding cars, and the honks and engines smoothly move from the front of the room to the back. And even Neo's fight in Merovingian's house nicely envelops the listening area with bits of debris and the ringing of weapons clanking with one another. Occasionally, some of those noises subtly echo into the overheads, but sadly, it's never on a consistent level to create an immersive hemispheric environ. Nevertheless, there are a couple of times worth admiring when atmospherics employ the ceiling channels effectively.

The lossless mix's greatest strength comes by way of an awesomely wide and expansive soundstage. The action and the many conversations, including the puzzlingly complicated dialogue with the Architect, is continuously kept busy and layered with tons of background activity that convincingly moves into the off-screen area. From beginning to end, imaging maintains a highly-engaging and spacious sense of presence with crystal-clear clarity in the mid-range, exhibiting room-penetrating highs during loud action sequences and lots of warmth in the mids in the quieter moments. At the same time, vocals are distinct and precise, never drowned out by the chaos left in the wake of Neo's search for answers. The low-end is about the same as its TrueHD counterpart, which is not a bad thing. Bass is powerfully robust and, at times, imposing in a few spots, providing the action and especially the techno music with a room-shaking weight. (Audio Rating: 94/100) 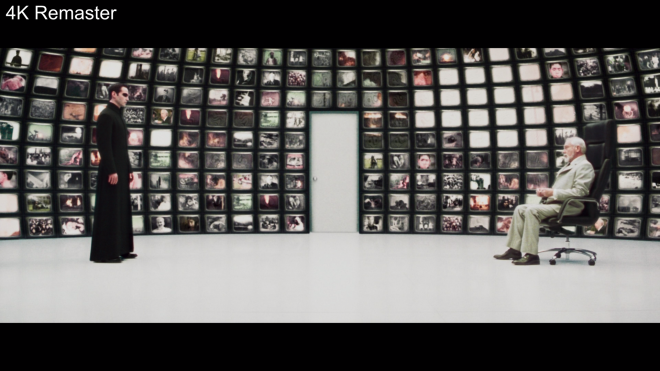 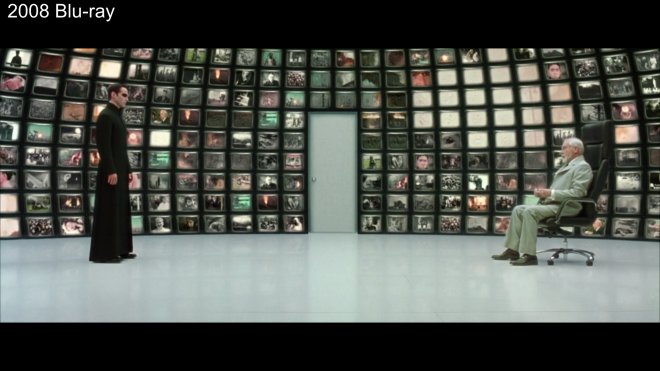 The UHD shares the pair commentaries as the accompanying Blu-ray. The remaining supplements are all contained on the second Blu-ray disc.

Falling deeper into the rabbit hole of problematic philosophical questions, The Matrix Reloaded plugs audiences back into a simulated reality that further pushes abstract notions about reality while mixing wildly-imaginative, eye-popping visuals. With Keanu Reeves, Laurence Fishburne, Carrie-Anne Moss and Hugo Weaving reprising their roles, the follow-up remains just as condemned and undervalued as when it originally released, but frankly, it's an enjoyable thinking person's action flick. Celebrating its 15th Anniversary, the sequel is reloaded to home video on 4K Ultra HD with a fantastic Dolby Vision HDR presentation, offering a superb upgrade over its HD SDR counterpart, and a highly-satisfying Dolby Atmos soundtrack that will rock the house. Porting over the same set of bonus features as the Blu-ray, the overall package is Highly Recommended for fans of the series.

Sale Price 14.96
List Price 34.98
Buy Now
3rd Party 5.39
In Stock.
See what people are saying about this story or others
See Comments in Forum
Previous Next
Pre-Orders
Tomorrow's latest releases