Transporter 3, the second sequel to the moderately popular action car franchise, is thankfully not as ridiculously over the top as its predecessor, making it more tolerable and slightly more entertaining. And yet, in spite of the somewhat thrilling car mayhem, the plot about a kidnapping to extort a politician is barely compelling enough to maintain interest. Jason Stratham is arguably the only aspect of the production to entice viewers. On 4K Ultra HD Blu-ray, the movie revs its engine with a good but arguably somewhat disappointing Dolby Vision presentation, but the Dolby Atmos soundtrack provides a welcomed upgrade over its DTS-HD MA predecessor. Porting over the same set of supplements as the Blu-ray, the overall package will attract Fans Only while others might want to wait for a sale or a franchise box set.

(Written by Tom Landy for the original Blu-ray.)

When I heard Transporter 3 was in the mail for me for review, I went out and bought Transporter 2. I had actually never seen it although it had been on my to-do list for a couple of years, and it just seemed like the right time to get myself all geared up for Transporter chaos. You know, two birds — one stone and all that jazz. Well, things didn't work out according to plan, however, as the first sequel turned out to be a huge letdown for me. Between the cartoonish stunts and the baffling story elements that made no sense whatsoever, my optimism for the second sequel sure felt like a victim of a hit and run. In a strange way, I think this is part of the reason why I actually liked Transporter 3. It's by no means a great movie and has big issues of its own, but I went in with really low expectations and ended up having a pretty decent ride.

In this outing, Frank Martin (Statham) is back in France, trying to make the most of his retirement by catching some rays and fishing with his friend Inspector Tarconi (François Berléand). Naturally, Frank still has the reputation of being the best transporter in the business and is approached by some men looking to hire his services to deliver a "package" across Europe. To their surprise, Frank declines the offer, but provides the name of one of his former associates, Malcolm (David Atrakchi). However, Frank's life literally comes crashing down all around him when Malcolm fails to complete the job and a mysterious man known as Johnson (Robert Knepper, Prison Break) holds Frank responsible. The next thing Frank knows, he's behind the wheel of his Audi A8 W12 pressured into completing the mission. What's worse, not only does he have to contend with a beautiful but bratty passenger, Valentina (Natalya Rudakova), both he and she are outfitted with high-tech bracelets that will explode if they are more than seventy-five feet away from Frank’s car. As Frank tries to think of a way out of his predicament and keep himself and Valentina alive, he begins to see he’s being used as a pawn in a nefarious chess game involving the environment. 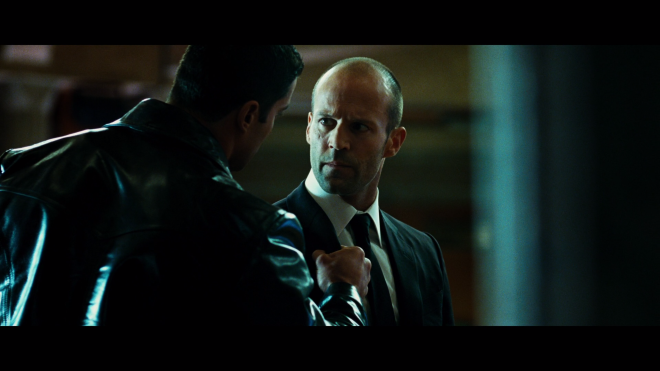 Just like the previous two Transporter films, this one is all about style over substance. The story is farfetched, the clichés run rampant, and there are parts of it that defy the laws of physics as well as logic, but we have loads of action to keep us moderately entertained and that’s the main thing. Stunt choreographer Corey Yuen returns to create slick martial arts sequences so Statham can beat the living crap out of boatloads of goons (who show up out of nowhere). There are also a couple of car chases that are a little hectic but get the job done. Plus, how can you not be somewhat amused when Statham has a train to catch and has to lug his Audi along with him for the ride? Maybe I was just in a goofy mood, but I thought it was hilarious.

Of course, it helps that Statham is back in the driver’s seat as the suave, swashbuckling Frank Martin, and he's still walking the fine line of corny but never quite crosses it. I was also pleased to see that the character of Tarconi (who was practically reduced to a bumbling impersonation of Inspector Clouseau in the last one) snapped back to reality here. Knepper even made a pretty good villain head honcho. The only questionable performance was from Natalya Rudakova, who in all fairness was a hair stylist plucked off the street. Sure she was obnoxious and won't be winning any awards anytime soon, but her character was supposed to be an annoying Ukrainian party girl anyways.

Still, the escapades of Frank Martin won't ever be in this same league as James Bond, Jason Bourne, or John McClane — and that is the fault of writers Luc Besson and Robert Mark Kamen. It's unfortunate, if they would have spent a little more time on their scripts fleshing out the plots, developing certain characters, and most importantly — filling in all the gaping holes, The Transporter could've been a real contender.

Lionsgate Home Entertainment brings Transporter 3 to 4K Ultra HD Blu-ray as a two-disc combo pack with a flyer for a Digital HD Copy. The dual-layered UHD66 disc sits comfortably opposite a Region A locked, BD50 disc inside a black, eco-cutout case with a glossy slipcover. At startup, the disc goes straight to a static screen with the usual options along the bottom and music playing in the background.

The second sequel in the franchise makes a rush delivery on Ultra HD with an arguably disappointing but somewhat mixed results. Overall, the HEVC H.265 encode hands over some notable improvements sure to please enough fans, namely in the brightness levels and color gamut.

The Dolby Vision HDR presentation displays a more ample and deeper palette, giving Giovanni Fiore Coltellacci's teal-orange photography an energetic pop. Primaries, especially reds, are more animated, and many action sequences are bathed in a steely blue hue. Natalya Rudakova's fiery hair is eye-catching while the many sunset scenes throughout are showered in an amber orange glow, which is quite nice. As a whole, there isn't any more variation than what can already be seen on its HD SDR counterpart. However, flesh tones receive a noteworthy touch up, looking more natural with a welcomed rosiness that feels accurate to the climate. Black levels, too, appear fuller and richer with strong gradational differences between various shades, revealing some of the finer aspects of Frank's suit. On the other hand, the smaller background details are occasionally consumed by the darkest shadows and corners of the frame.

Shot on traditional 35mm and later mastered to a 2K digital intermediate, the 4K presentation also screeches onto the screen with generally great contrast, making it one of its better aspects. Whites are significantly brighter and more intense, providing the action with a bit more razzle-dazzle and the 2.40:1 image, in general, with an appreciable luster. Unfortunately, highlights don't benefit much in its jump to UHD, sometimes racing in a bit too hot and slightly blooming, washing out some of the finest details. Speaking of which, overall definition and clarity is not much sharper than the Blu-ray. Granted, the 2160p video shows an appreciable uptick, but there are several instances of minor aliasing along the sharpest edges. Even more egregious is evidence of ringing and very mild edge enhancement, such as the scene after Frank and Valentina's intimate encounter around the 69-minute mark. Overlooking that, the upscaled transfer is awash in a fine layer of grain, offering a relatively nice upgrade. (Video Rating: 72/100)

Sporting a new Dolby Atmos soundtrack, Transporter 3 revs its engine and out runs a bomb with a loud bang, screeching across the screen with fluid movement and excellent balance.

From beginning to end, background activity is continuously energetic, generating a broad and spacious soundscape. Whether it's cars or bullets, the action moves and pans from one side to the other with fluid precision and fidelity. Some of those effects discretely move into the top heights for an amusing half-dome soundstage, but Alexandre Azaria's score does most of the work, creating a terrifically engaging wall of sound. Even the loudest segments remain distinct and dynamic with room-penetrating clarity, exhibiting outstanding detailing without a hint of distortion. Dialogue and character interaction never falter, keeping Frank's gruff Cockney accent at all times audible and intelligible. The low-end comes with a powerful and often authoritative presence, often delivering a palpable oomph to specific moments that resonate throughout the room.

Action sequences also burst forth with enthusiasm, as debris flies overhead and to the sides, creating several satisfying moments of immersion and placing the listener right in the middle of the explosive mayhem. Unfortunately, quieter scenes are not quite as impressive, largely falling into pits of silence while all the attention is redirected to the fronts, and sometimes, this even includes a few of the fight sequences, such as the one in the car garage. The same goes for the ceiling channels, which in truth, are employed sporadically, but when called upon, they're used effectively without feeling forced or artificial. Nevertheless, much of the excitement is maintained in the sides and rears with little heard in the heights. All in all, the system is given a healthy workout with intense energy and excellent directionality. (Audio Rating: 86/100)

Director Olivier Megaton, a real-life superhero name if ever there was one, takes the wheel in Transporter 3, the second sequel in the moderately popular action car franchise, and manages to escape the same ditch its predecessor crashed into. Along with Jason Stratham as the titular courier with a mysterious military background, the visuals, stunts and fights are arguably the movie's main attraction while the plot is basically thrown in the trunk for being a distraction. We know it's there, but no one really wants to look at it or examine it. Crashing into 4K Ultra HD Blu-ray, the car mayhem arrives with a strong but also somewhat disappointing Dolby Vision HDR presentation, but the Dolby Atmos soundtrack offers a few bells and whistles worth admiring. Porting over the same set of supplements as its HD SDR counterpart, the movie will likely attract only fans of the series while the curious might want to wait for a sale or franchise box set.

Sale Price 17.99
List Price 22.99
Buy Now
3rd Party 13.99
In Stock.
See what people are saying about this story or others
See Comments in Forum
Previous Next
Pre-Orders
Tomorrow's latest releases