Director Jon Turtletaub delivers a brainless rip-roaring fish tale featuring Jason Statham doing what he does best as he hunts a massive prehistoric CGI shark. It's not smart, but it never tries to be. It's just big-budget spectacle fun that proves to be an improvement over the literary series that spawned it. Whether or not this is your sort of fish story, Warner Bros. delivers The Meg to 4K Ultra HD Blu-ray with stunning results. The upscaled 4K image with Dolby Vision HDR showcases terrific details and colors while the Dolby Atmos audio mix rocks the show. Recommended. (We have also reviewed this movie on Blu-ray and 3D.)

"Meg versus man isn't a fight… it's a slaughter."

Jason Statham is Jason Statham pretending to be Jonas Taylor - a disgraced former Navy rescue sub commander. Years ago, a rescue at the deepest depths of the Pacific in the Marianas trench went horribly wrong with several casualties. Jonas says it was a prehistoric sea creature that attacked them and blew up the sub before everyone could be rescued including two of his team members. The Navy says he cracked up under pressure. Now eccentric nerd billionaire Jack Morris (Rainn Wilson), Dr, Zhang (Winston Chao) and his daughter Suyin (Li Bingbing) are conducting experiments in the depths of the trench to prove that ancient prehistoric life is hidden under a thermal cloud. When a gigantic 75-foot Megalodon attacks the exploration team, Jonas is called back into action because his ex-wife is trapped thousands of feet below the surface. During the rescue attempt, Jonas and Suyin unwittingly allow the Meg to rise from the icy depths. The massive mindless eating machine becomes an unstoppable menace attacking and swallowing whole an entire cast of disposable characters. 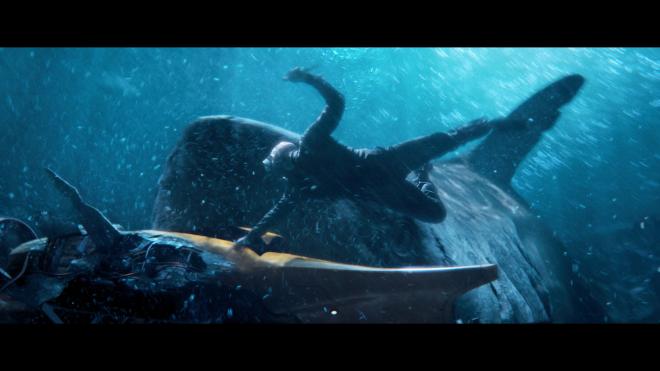 The Meg is not smart - not even close. But I give it credit for being a whole lot more clever than the source novels by Steve Alten. This movie has been in development hell since the late 90s. The first novel was a huge hit and I devoured it quickly slamming through the pages while on vacation. As the sequel novels started churning out one after the other, the plots became daffy and ridiculous disposing of any genuine science and going full pulp science fiction. The first book would have been unwieldy to adapt on its own and take seriously, but the idea that this could be a series of films outside of the SyFy Channel seemed impossible. Thanks to the barrage of Megasharks, Giant Octopuses, annual Sharknados, and the box office bite shark flicks have been chomping the last couple of years, the time was right for The Meg to surface. And without staying completely true to the original novel, the movie sheds a lot of hokum baggage that was little better than soap opera dramatics.

This film only works because it knows exactly what it is - a fishy fleshy B-movie with a Megalodon-sized budget. You're not here to find Oscar-worthy performances. It's a full-on special effects buffet offering up plenty of impressive CGI creatures with some occasionally impressive practical effects work. I give Turteltaub and his team of writers full kudus for finding the pace of the film and never letting the energy dip for long. Character development is virtually non-existent. Any character conflicts are resolved within a matter of minutes. Seriously, Statham enjoys the most amicable and friendly relationship with his ex-wife in the history of legalized divorce. The Navy doctor that blackballed him and killed his career? It's resolved with a quick handshake. While for most movies this would be a problem, it works for The Meg because audiences paid good money to see Jason Statham fight a giant shark - and there is plenty of that to pass around. There's a love subplot and a cute kid, but that's just filler to give the effects crew time to work on the big set pieces.

It may sound like I'm jaded or cynical about this movie, and maybe I am a little bit, but I have to admit that I enjoyed the hell out of it. This was one of the best 3D theater-going movies, after Infinity  that I saw all summer. Skyscraper was similar brainless 3D fodder, but The Meg really knew how to work the whole show offering plenty of nods and nudges to past shark movies while staking a claim all its own. It's big dumb spectacle fun. It never tries to be high art and it doesn't have to be to work.

The trailers are every indication of what to expect with this movie. If you're not enticed by what you saw in two and three-minute snippets, you're probably not going to love this one nearly half as much as you would have hoped. At first, I was only mildly entertained but after a couple more viewings I've had a lot more fun with it. The only real surprise for me was how Statham takes out the titular creature. It may be completely impossible and ridiculous, but trust me it works 100-times better than what was in the book. Since this flick bit out about half a billion bucks at the global box office, a sequel is apparently already in the works. If they add a little more blood and guts to the mix with a lot more wholesale carnage, they will already have a solid sequel. As it is, The Meg is easy disposable fun.

The Meg swallows up 4K UHD courtesy of Warner Bros in a two-disc 4K UHD Blu-ray + Blu-ray + 4K Digital set. The discs are housed in an eco-friendly case with identical slipcover artwork. The disc loads directly to Warner Bros.' standard static image main menu with traditional navigation options. None of the bonus features are found on the 4K disc. The included digital copy can be redeemed either through VUDU direct or Movies Anywhere - Movies Anywhere does redeem in 4K on supported platforms. 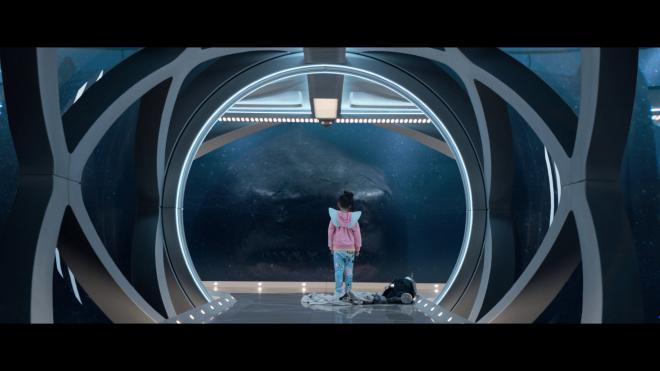 The Meg makes a big splash with its 2160p 2.40:1 transfer with Dolby Vision HDR and HDR10. Sourced from a 2K digital intermediate, the 4K UHD offers robust detail levels. While I wouldn't go on the limb to say they're a "night and day" difference over its SDR 1080p counterpart, I will say that the subtle refinements offer a distinct leg up over the competition. The most notable differences are in the many close-up shots. When characters are in tight confines of subs or small spaces, you can readily appreciate the improvements in small facial features, pigmentation, and clothing textures. Wide shots that offer a lot of CGI visual spectacle are met with so-so results. While many of the effects do look amazing, some establishing wide shows like when Jonas first descends towards the trench to save the day is overly CGI soft and looks very weightless. Effects within the trench itself don't suffer quite as bad but there is still a cartoonish quality to some of the effects that don't hold together at a higher resolution.

With Dolby Vision HDR, the image does enjoy a notable boost in colors, contrast, and black levels. The film already enjoyed a robust color pallet with heavy primaries and like the detail levels, there's now some shades and improved gradience. The differences are noticeable right away with the opening sub rescue sequence where there are plenty of red, blue, and green alarm lights positioned all over. The glare they would give off on Statham's head were more uniform and solid in 1080p, but with the Dolby Vision pass in place, there are subtle shades without being one solid block of color. Likewise the scenes in the trench where the titular shark lives, the critters get to provide variances in colors rather than being uniform light and dark shadows. Black levels are deep and inky with stable contrast. Some of the scenes in the open ocean could have a pretty glaring white sky that may slightly bloom in 1080p, but they are better resolved and more natural looking here. My only real gripe with this 4K presentation is how some of clunkier CGI effects shots appear are more noticeable than in HD. 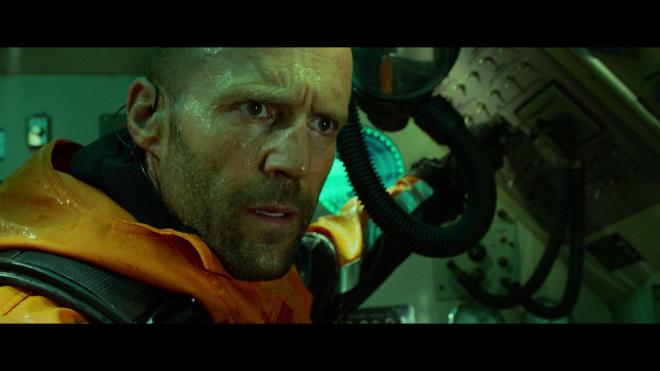 The Meg splish-splashes around with a rocking-good Dolby Atmos mix. Worth noting, for the standard Blu as well as this 4K UHD disc, you have to go into the audio subsection of the main menu to select Atmos, or it'll default to the perfectly decent but nowhere near as impressive DTS-HD MA 5.1 audio track. (Please fix this, Warners!)

As a big loud spectacle movie, The Meg makes impressive usage of Atmos with near constant channel activity. The only time any of the surround or overhead material slows or feels absent is when the movie pauses for a silly meaningful conversation between the cast. But thankfully those moments are relatively brief as the rest of the movie maintains a flurry of activity.

My favorite atmospheric effects are the creaking sounds of ocean pressure squeezing the submersible vehicles as they descend. It's a great overhead effect that rumbles with nice subtle LFE kicking up those dissonant notes. Also noteworthy is anytime anyone is doing battle with the Meg. Whether they're in a mini-sub or in a helicopter, there is great overhead activity. The best is whenever the mini-subs are racing around in the water as they rise and fall the swirling rotors and displaced bubbles give off an awesome vertical effect.

Dialogue clarity is spot on without any issues. Levels are never a problem as this film is pretty loud and active from the get-go. If anything, I felt like I actually had to turn things down a tad just so I didn't tick off my neighbors! Gregson-Williams' score is a perfect accompaniment to the on-screen action and the low base tones provide some great LFE rumbles of their own. So even when the show is trying to be quiet and contemplative, there is plenty of movement and activity to keep the mix lively. 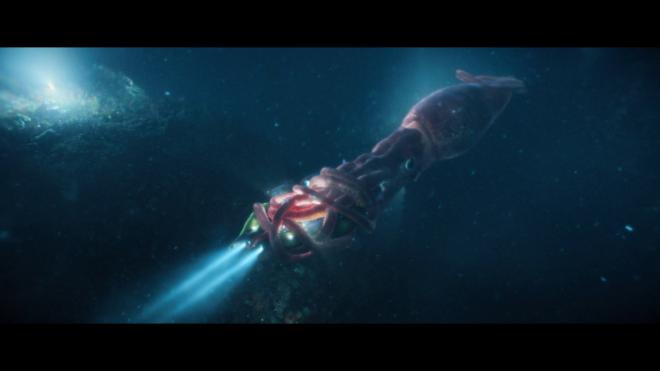 Considering The Meg was one of a relative few hits for Warner Bros. this summer season, I'm rather surprised at how anemic and inconsequential the bonus features are. Little more than talking head EPK material, you don't get much sense of what went into the show. As short as it is, the New Zealand Film Commission mini-feature has a lot of production information about the shoot. 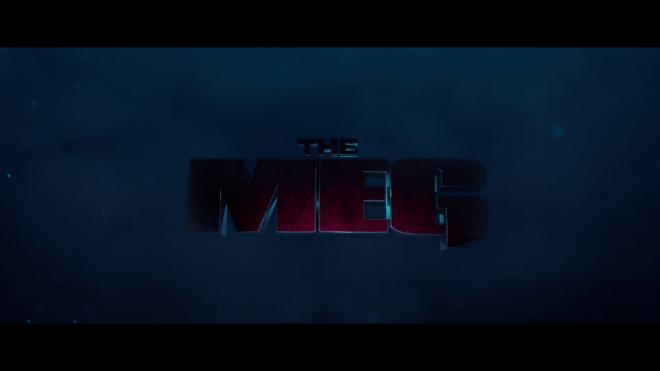 The Meg is SyFy channel shark movie with a gargantuan budget and plenty of Jason Statham badass snark to spark an aquatic giant shark franchise. Whether or not the rumored sequels arise, this first outing was a good way to burn a couple of disposable hours. Warner Bros. serves The Meg onto 4K UHD Blu-ray with a bright and shiny Dolby Vision presentation and a great Dolby Atmos mix that features a constant flurry of activity. Sadly, bonus features are a bit of a letdown without anything of substance. Overall, if you've become a connoisseur of summer shark movies, The Meg is a fun one to add to your 4K UHD collection. Recommended.

Sale Price 25.99
Buy Now
3rd Party 9.72
In Stock.
See what people are saying about this story or others
See Comments in Forum
Previous Next
Pre-Orders
Tomorrow's latest releases