Watch Dwayne "The Rock" Johnson climb a tall crane, leap onto a burning building, and take out the bad guys to save his family in... Skyscraper! This uninventive rehash of better disaster action movies survives only on the bald-headed bravado of Johnson who delivers yet another engaging performance in an over-the-top action spectacle. As far as big dumb action movies go, this is pretty dumb, but if you turn off your brain and grab a bucket of buttery popcorn, it's still a hell of a lot of fun. Skyscraper leaps on to 4K Ultra HD Blu-ray in a two-disc set courtesy of Universal Studios featuring a solid 4K transfer with Dolby Vision HDR, an aggressive impactful Dolby Atmos mix, and a decent assortment of bonus features. If you don't demand too much from it, you should enjoy the action antics Skyscraper has to offer. Recommended. (We've also reviewed this movie on Blu-ray.) 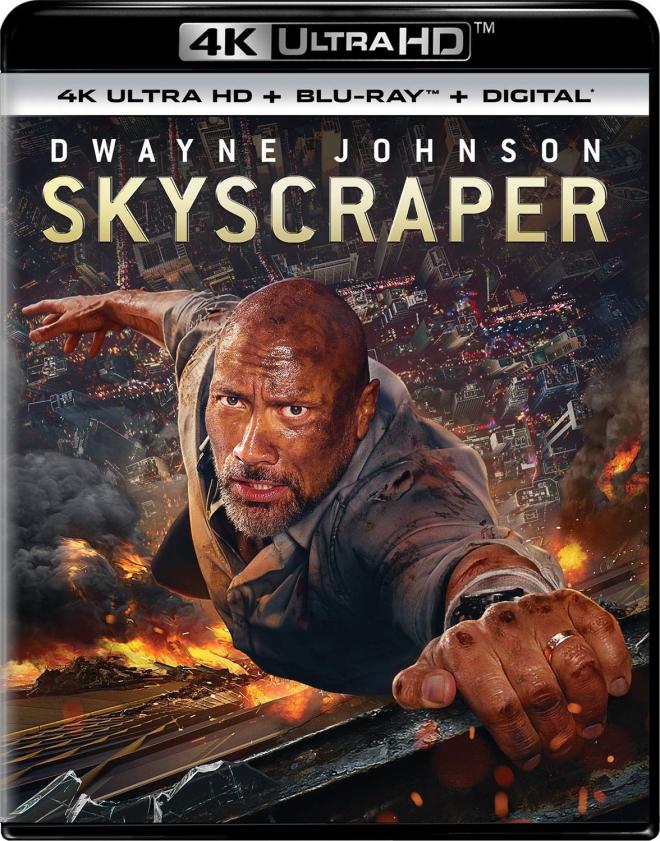 "If you can't fix it with duct tape… you ain't using enough duct tape."

Ten years after a hostage rescue went sideways leaving him scarred and minus one leg, Will Sawyer (Dwayne Johnson) has laid down his gun and picked up a pen. As a security assessment specialist, his friend and former fellow agent Ben Gillespie (Pablo Schreiber) has hired Will to underwrite billionaire Chin Han (Zhao Long Ji) latest construction, The Pearl - the world's tallest building at 3,500 feet tall. What should have been a working vacation for Will and his wife, Sarah (Neve Campbell), turns into a nightmare when international terrorists hijack the building's state-of-the-art security system and set the building on fire above the 96th floor. Now blamed for the crime, Will must find a way to get back into the building above the fireline to stop the terrorists, clear his name, and rescue his trapped family.

From the very first poster, featuring Dwayne Johnson leaping into a burning building from an impossible distance, you knew Skyscraper wasn't going to be a movie remembered for its brains. As I sat down to watch this movie in the theater with my wife, we knew full well it was the very definition of big dumb fun summer action movie. We were hoping for something on par with some of the fun we had with San Andreas. Skyscraper doesn't quite get there, but it gets close enough to be fun and provide diverting, brain-off entertainment.

There are a number of issues holding back Skyscraper from being a towering achievement of its sub-genre First, the villains are nondescript Euro-trash with a motivation that makes little sense. The film is also content with checking off obvious cliché boxes one at a time.

Still, the film's biggest failing is grounded in its story. It simply tries to do too much. If it had just been a modern Towering Inferno, that would have been enough. If it had been a run-of-the-mill Die Hard ripoff, that would have been fine too. But for it to do both films with smatterings of The Fugitive tossed in and an ending pulled from Enter The Dragon, it's very easy to say Skyscraper suffers from trying to do way too much for a simple dumb movie. It's not that smart. And if it was going to do too much it didn't go far enough; we don't get a Dennis Hopper-style villain to make the shenanigans at least entertaining.

However, I will say the film has some great action sequences and generally works pretty well up to the point Johnson makes his impossible jump. Actually, that whole sequence of him getting the crane into position, swinging out the steel cables, and trying to get them to catch on the building, hoping he'd be able to slide down, is great stuff. It builds an in-story cause for why he has to jump, and you do (kinda) get caught up in the moment even though you know he's gonna make it. But it's like this throughout all of the action sequences and stunts. "Oh, this big thing is gonna happen!" ...then said event happens and you're stuck with a cliché you've already seen in other movies that bogs down the show and stalls out a lot of suspense.

Per usual, Dwayne Johnson proves he's an amiable sort for schlocky action/adventure rollercoasters. Even if you don't 100% buy his character, it's hard to deny the man's charms as a lead. It's also nice to see Neve Campbell back in a role that isn't simply the "wife in distress." She's capable, tough and, thankfully, doesn't just sit there and wait to be saved. Aside from Pablo Schreiber's small but important part, the rest of the cast is fairly cookie cutter without any truly entertaining bad guy to set the stakes.

At the end of the day, I enjoyed Skyscraper less than I hoped I would, but I didn't hate it either. It's one of a few hundred other movies in my collection that fits the bill for when I just want to put something on that's fun that doesn't require attention all the time. Had the film maybe tried to do a little less, I suspect it could have been something a little more without hanging on the beats of better movies.

Skyscraper jumps the crane onto 4K Ultra HD courtesy of Universal Studios in a two-disc 4K UHD + Blu-ray + Digital set. Pressed onto a BD-100 disc, the discs are housed in a standard sturdy black case with identical slipcover artwork. The disc loads to a static image main menu featuring traditional navigation options. All bonus features are located on the 4K disc.

Skyscraper long-jumps onto 4K UHD with a crisp and colorful 2160p transfer with HDR10 and Dolby Vision that easily rises above its 1080p counterpart. While I haven't been able to ascertain the resolution of the digital intermediate, the improvement in fine details is readily apparent. After the botched hostage rescue and Johnson is in the hospital, you can clearly see an uptick in fine details in beard stubble and the makeup effects. Same for when we see his scarred leg. Later, after he's had some near misses with fire, his clothing and skin take on a smoke-charred appearance that is even more defined in 4K. Clothing and production design also features nice improvements as well.

The image enjoys a nice color upgrade with Dolby Vision HDR. Primaries have the most notable improvement; the steely icy blues of the opening action sequence as well as the bloody reds of Johnson's wounds. Police and ambulance emergency lights cast some terrific reds and blues throughout the city scenery. Daylight scenes around Hong Kong feature plenty of robust colors that really pop and catch the eye. On the black level and contrast side of things, the Dolby Vision pass gives a little extra breathing room adding some extra depth to the image. There's a scene of Johnson and Schreiber talking about old times on a ferryboat where the background sky is a foggy white mass. On the standard Blu-ray I thought this scene could look a bit flat and lifeless, but with Dolby Vision and the added resolution, there is an appreciable improvement in depth and color saturation where the whites don't feel like they're blooming as harshly.

Take a look at the scene where Johnson's family is running around the giant park as well. In 1080p, the image is dark and murky without much depth. With the added resolution and WCG, the 4K Blu-ray offers more shadow separation (but is still a bit flat looking). The image's hardest points revolve around scenes with heavy CGI scenery. The inside of the Pearl, the park, whenever Johnson dangles by one hand - these sequences lack any real immediate depth past a certain obvious point and the effects can have an inorganic quality to them. Overall this is a pretty great looking transfer that displays a clear improvement over it's SDR counterpart. I wouldn't go as far as to call it demo-worthy, but it's damn impressive all the same.

An action movie needs a great audio mix and Skyscraper gets a lot of mileage out of its Dolby Atmos track. Dialogue is crystal clear throughout and never at odds with the other elements. Sound effects have a nice natural quality to them with many featuring pint-point object places. When the terrorists first set fire to the building using the sprinkler system, the ensuing pops and sparks are a perfect example of what this mix can do giving terrific surround movement as well as some articulate overhead action. The sequence where Johnson moves the crane while a helicopter circles overhead is another great moment. Fistfights also get a lot of movement and activity, with some noticeable vertical action. And, between the roar of the blaze, explosions, the sound of the turbine rotors, there is plenty of LFE activity to keep your sub rumbling. As proved over the years with numerous other movies, Steve Jablonsky knows how to deliver a thrilling action movie score. With some terrific directionality, levels are spot on without a need to boost the volume past where you'd normally keep things for an average viewing experience.

Most movies don't get much in the way of a robust bonus feature selection these days, but Skyscraper enjoys a few decent ones. The highlight is the audio commentary from director Rawson Marshall Thurber. It's a good listen and offers up plenty of material. The deleted and extended scenes actually work pretty well, but you can see why they were cut for timing issues. The rest is the tried and true EPK talking head stuff that only briefly touches on the making of the movie.

Skyscraper won't be winning any awards - but then it was never meant to. It's a big dumb summer action movie. Certainly not the greatest of the lot to ever come down the pipeline, but the film does have its moments and in spite of everything it is still a good bit of popcorn munching fun. Don't expect anything from it and you should have an okay time. Universal Studios delivers Skyscraper onto 4K Ultra HD Blu-ray with a 4K transfer with Dolby Vision that offers a clean and clear improvement over its 1080p counterpart, a snappy and active Dolby Atmos mix, and a couple of decent bonus features. If you're game for some good brainless fun, give this one a spin. Recommended.

Sale Price 10.99
Buy Now
3rd Party 6.98
In Stock.
See what people are saying about this story or others
See Comments in Forum
Previous Next
Pre-Orders
Tomorrow's latest releases