Lush with a visual beauty and sense of wonder that hypnotizes the audience, Alex Garland's Annihilation is a thought-provoking sci-fi drama exploring our innate self-destructive behavior in light of humanity's possible extinction. The film crash lands on 4K Ultra HD with a lovely Dolby Vision HDR presentation, an awesomely immersive Dolby Atmos soundtrack and a strong set of supplements, making the overall package Highly Recommended.

Based on the novel of the same name by Jeff VanderMeer, Annihilation is a gorgeously mesmerizing sci-fi film lush with a visual beauty and sense of wonder that hypnotizes the audience. At its center is a mystery circling five women determining the origins and purpose of an alien species that crashed near the Gulf of Mexico coast, creating a strangely colorful and translucent electromagnetic field dubbed "The Shimmer." Previous expeditions into the mysteriously beautiful dome have failed, and scientists have discovered it is growing and will continue to do so until it consumes the entire planet. In other words, as suggested by the title, the film is essentially about an impending apocalypse, making it one of the most visually stunning and captivating movies about the end of the world. But as is also implied by where the aliens crashed — the Gulf of Mexico is ground zero for another asteroid impact that caused a massive worldwide extinction event 66 million years ago — there is more to humanity's annihilation than beauty.

One of the more unique and haunting aspects of the film, the latest feature from Ex Machina creator Alex Garland, is the extraterrestrial visitors going against the norm. The plot is not the typical alien invasion flick where little green men with hostile, malevolent intentions obliterate the planet in a some enormous, CGI-infested spectacle. As described by cellular biology professor Lena (Natalie Portman), the foreign invader is more like a cancerous growth without any knowledge of right or wrong or possess a specific objective, but it rapidly adapts to its host environment recombining and merging — or more like evolving — all life at the DNA level into something new. Touching on one of many of the film's underlying, thought-provoking themes, the invasion is not about ending life but rather, about producing more; less about destroying it and more of drawing a deeper connection and uniting the planet as one life. However, as is the obvious case, and which has been repeated throughout Earth's history, new life comes unfortunately from the extinction of another. 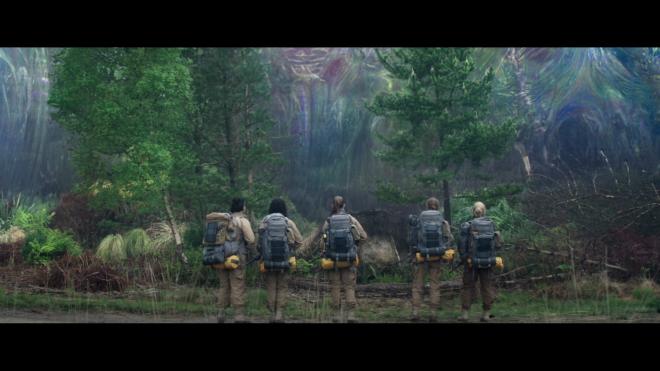 This idea spreads and proliferates to perhaps what could be argued as the plot's central poignant theme: self-destruction. At one point, Lena and psychologist Dr. Ventress (Jennifer Jason Leigh) plunge into more shrewdly pensive conversations about our innate propensity to undermine our own happiness, a possibly inborn — and very much unconscious — desire to sabotage one's own best interests. And we see this idea explored further while, not coincidentally, exploring both the mystery of the "Shimmer" as well as the lives of the women, such as Ventress, who is actually dying of cancer, volunteering for this mission because she's lost all hope. Paramedic Anya (Gina Rodriguez) is a recovering addict while anthropologist Cass Sheppard (Tuva Novotny) continues bearing the loss of her daughter. Of more interest are physicist Josie (Tessa Thompson) cutting herself to feel alive and Lena grappling with the weight of her failed marriage. Tough and strong-willed as they are, each woman arrives with a tragedy that seems to attract them to a seemingly suicidal mission into the "Shimmer."

As the plot progresses, journeying towards a single point where the asteroid crashed into a lighthouse — a not so subtle metaphor referred to as the singularity — the various ideas explored by Garland converge into a bizarre clash that leaves more questions in need of further scrutiny, which frankly can't be discussed without also spoiling it. Beyond the dazzling visual design and the spectacularly sumptuous photography of Rob Hardy (Testament of Youth, Mission: Impossible – Fallout), Annihilation is about the conversations and the specific details mentioned. What characters say are seeds planted into the viewer's mind and allowed to grow without a clear purpose or end-goal, much like the "Shimmer" itself, such as pointing out our protagonists are not only women but scientists or Lena's infinity-shaped ouroboros tattoo. Personally, I continue to be fascinated by an alien species that doesn't mean harm but simply driven by survival and its own genetic makeup. Can its inherent desire to live defeat humanity's instinctive drive for self-destruction?

Paramount Home Entertainment brings Annihilation to 4K Ultra HD Blu-ray as a two-disc combo pack with an UltraViolet Digital Copy, which can be redeemed via ParamountMovies.com, giving users access to a 1080p HD copy, or VUDU, which unlocks the 4K Dolby Vision version with Dolby Atmos. Inside the black, eco-vortex case with glossy slipcover, the dual-layered UHD66 disc sits comfortably opposite a Region Free, BD50 copy. At startup, viewers are taken directly to a static screen with the usual selection along the bottom and music playing in the background.

Humanity's annihilation transforms the Ultra HD landscape with a gorgeous HEVC H.265 encode in Dolby Vision HDR struck from a 4K digital intermediate, which was sourced from a combination of digital cameras capable of 6K and 4K resolutions. Remaining faithful to the stylized cinematography of Rob Hardy, the freshly-minted transfer displays a slightly restrained contrast for much of the runtime. This gives the picture a somewhat overcast and dour appeal, which seems to be in line with the plot's theme. Inside the shimmer, however, things brighten considerably, showering the exotic, flourishing habitat with intensely brilliant whites in the flowers, the strange lifeforms and the fluffy clouds in the sky. However, it seems as though specular highlights are affected by the filmmakers' creative intentions since the brightest spots are not particularly revealing or dynamic. In fact, light sources, be it from fire, sunlight or lamps, tend to bloom a tad, engulfing some the finer details within while failing to also show any improvement over its HD SDR counterpart.

Also, much of the palette feels subdued until after the characters begin experiencing the evolutionary strangeness of the shimmer. Immediately apparent are the sumptuously resplendent primaries, glowing with an uncanny polished luster and elation that several moments feel like a bewildering phantasmagoric hallucination. At the same time, the 4K Dolby Vision presentation is flourishing with a succulent, elaborate array of secondary hues that splendidly complement the mesmerizing, reverie-like visuals. The liquid-like, translucent wall of the shimmer or the strange glow from the lighthouse has an opalescent and pearlescent shine that flows similarly to dish detergent in a pool of water. The new plant, animal and fungi life growing everywhere comes with a lustrous, effervescent quality that dazzles the screen, making this alien environment all the more captivating and appealing. Facial complexions appear healthy with a lifelike rosiness and texture, revealing with the smallest wrinkle, pore and negligible blemish in close-ups.

Given the stylized digital photography, brightness levels don't appear impaired or comprised. In fact, the 2.39:1 image is noticeably darker overall than its Blu-ray counterpart, layered with lots of inky, stygian blacks throughout. However, this also creates a small issue since many scenes take place at night and during poorly-lit environments, and the pitch-black shadows tend to engulf the finer details and objects in the background, often making it very difficult to properly make out facial expressions or movement in the darker moments. Daylight sequences, on the other hand, are significantly better, displaying excellent gradational differences between the clothing, military equipment and within the shadows. The rest of the 2160p video displays razor-sharp definition in nearly every frame, including the many CG sequences, exposing far more details than the BD. From the stitching and threading of the clothing to individual hairs, the tiny leaves of plants and the rough bark of trees, viewers can distinctly make out every aspect of this new rapidly-evolving world and appreciate the amount of creativity that went into designing it.

What better way to enjoy the end of the world as we know it than in a gloriously immersive Dolby Atmos soundtrack, submerging the audience into an otherworldly reality filled with bizarre creatures and fantastical sounds.

Similar to the video, the audio design feels a bit restrained during the film's first quarter, placing more attention on the dialogue and the intimate conversations, displaying exceptional clarity and tonality in the vocals. When the characters approach the shimmer, the alien aura comes with a strangely haunting hum that not only fills the entire soundstage but also spreads into the top heights, creating an overwhelming half-dome wall of sound. The mid-range during those same moments exhibits fantastic detailing and definition in the higher frequencies, maintaining superb precision and fidelity across the entire front soundscape. At the same time, the hum produces a ground-shaking, couch-trembling rumble that energizes the whole room, providing the shimmer with an eerie, foreboding presence. For the rest of the movie, the low-end is robust and hearty, giving gunshots and the few action sequences an appreciable impactful punch, occasionally hitting as low as 18Hz in a few places, especially towards the end (bass chart).

Further plunging the listener into the middle of this fantastically alien world are all the haunting and bizarrely beautiful noises suggesting an environment teeming with life. The design feels continuously busy and swarming with the natural buzzing melodies of crickets and flies all around, along with the chirping of birds or the wind blowing through the leaves of trees in the distance. These same atmospherics can be distinctly heard panning across the overheads for a majority of the film's runtime, terrifically generating an enveloping, hemispheric soundfield. Simultaneously, the unusually weird and eerie score by Ben Salisbury and Geoff Barrow bleed into the surrounds and ceiling channels while also employing the subwoofer with pleasing effectiveness and depth. This is not the sort of object-based audio mix meant to overwhelm the viewer or could compete with the more traditional, bombastic actioner; rather, it's a subtle aural experience that's quite satisfying and compelling.

Part 1 – Southern Research (HD): A pair of short pieces exploring the adaptation process, the plot's themes, the visual design and the characters, made largely from interviews and BTS footage.

Part 2 – Area X (HD): Two more featurettes now focused on the technical aspects of the production, stage design, the practical effects and finishing on the importance of the digital work for completing the visuals.

Based on the novel of the same name by Jeff VanderMeer, Alex Garland's Annihilation is a gorgeously mesmerizing sci-fi film lush with a visual beauty and sense of wonder that hypnotizes the audience. At its center is a mystery circling five female scientists led by Natalie Portman and Jennifer Jason Leigh curious to understand the origins and purpose of an alien species slowly engulfing the natural habitat of the southeastern coast and terraforming the area.

The thought-provoking sci-fi drama crash lands on 4K Ultra HD Blu-ray with a lovely Dolby Vision HDR presentation and an awesomely immersive Dolby Atmos soundtrack. With a small but nonetheless satisfying set of bonus features, the overall package is Highly Recommended for fans of the film and UHD enthusiasts hungry for more beautiful Dolby Vision goodness.

Sale Price 18.76
List Price 25.99
Buy Now
3rd Party 59.99
In Stock.
See what people are saying about this story or others
See Comments in Forum
Previous Next
Pre-Orders
Tomorrow's latest releases