With expectations set very low, Pacific Rim Uprising will mildly satisfy fans of the first movie and if taken as pure popcorn escapism. Otherwise, audiences will quickly fall asleep, waking only to the ear-piercing robot mayhem. The 4K Ultra HD Blu-ray features a gorgeous Dolby Vision presentation, an awesome Dolby Atmos soundtrack, and a small set of supplements, making the overall package Worth A Look for hardened fans.

We have also reviewed this film on Blu-ray.

For those who felt Guillermo Del Toro's sci-fi mecha actioner Pacific Rim left them wanting more, don't expect Uprising to fulfill those expectations. The next chapter in the fight against the apocalypse is more of the same without completely being a carbon-copy of its predecessor, littered with contrivances for bringing back hideously imaginative monstrosities from another dimension. (Are the filmmakers implying a certain someone had babies with a Kaiju? Seriously?) Added to that, the story is led by disposable, forgettable protagonists who ultimately would have made no difference to the final outcome.

On the other hand, for those whose childhood fantasies of seeing giant robots battle gargantuan monsters felt instantly satisfied by Del Toro's 2013 popcorn escapism — and that is literally all that matters — then you've pretty much already made up your mind. There is very little that could be said to deter such hardened fans, and to be perfectly honest and fair, I reluctantly agree with such passions. (I openly admit to my bad taste in movies because I want to enjoy some brainless diversions.) Similar to the first movie, however dumb and silly the device for introducing the Kaiju into our dimension, the goal is simply to revel and be awed by the insanely fanciful and whimsically inventive visuals. So what certain characteristics of Raleigh Becket and Stacker Pentecost were essentially meshed together and then split again between Jake Pentecost (John Boyega) and Nate Lambert (Scott Eastwood doing his best "I'm not my dad" handsome, smarmy sexiness). Their sole purpose for existence is an excuse for the awesome action. 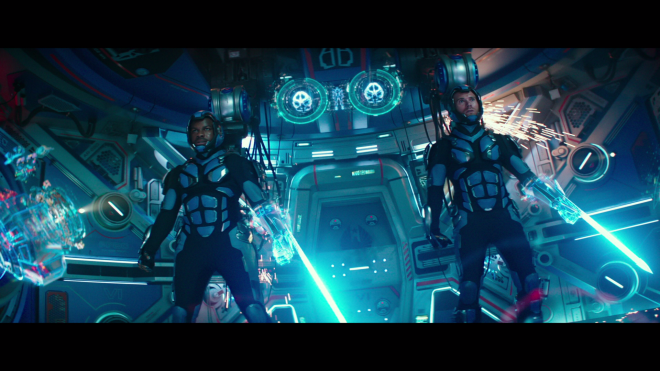 The remaining ensemble cast is basically fodder fuel for the plot. (Yeah, the plot. Not the monsters.) They are an assortment of paper-thin, superfluous, two-dimensional personalities that trivially perform action in the background, even going so far as forcing a predictable subplot about teamwork, until suddenly called upon to affect the filmmakers' main objective — anything having to do with Pentecost and Lambert finally teaming up and climbing into a giant robot to fight a giant monster. This includes embittered, talented street orphan Amara Namani (Cailee Spaeny). Of the young cast, the only one which displayed a mildly interesting personality is Viktoriya Malikova (Ivanna Sakhno), the young privileged pilot rivaling Amara as the hardened soldier.

Uprising goes out of its way to be as simplistic as possible, even when featuring Charlie Day and Burn Gorman reprising their respective roles from the previous movie to provide the central conflict, which again also, is ridiculously nonsensical and laughably silly. Admittedly, Jing Tian, as ruthless businesswoman Liwen Shao, offers another mildly worthwhile character whose turn in the third act generates some amusing laughs. Director Steven S. DeKnight also deserves some credit for taking over and doing surprisingly well considering he's following up a proven visual master like Del Toro. The story tends to dawdle in a few areas and not all the action feels quite as engaging as it should, such as the attack on Shatterdome. But outdoors in the middle of major metropolitan areas, the sequel satisfies those same childhood fantasies which have attracted audiences in the first place and make it worth at least one viewing.

Universal Studios Home Entertainment brings Pacific Rim: Uprising to 4K Ultra HD Blu-ray as a two-disc combo pack with a flyer code for a Digital Copy. When redeeming said code via UPHE.com and Movies Anywhere, users only have access to the SD and HD SDR versions while VUDU users can access the 4K Dolby Vision version with Dolby Atmos. The triple-layered UHD100 disc sits comfortably opposite a Region Free, BD50 disc inside a black, eco-vortex case with a glossy slipcover. At startup, the disc goes straight to a menu screen with a static image of the cover art and music playing in the background.

Once again, robots and monsters brawl on the streets of 4K Ultra HD Blu-ray with a gorgeous HEVC H.265 encode, supplying the complete onslaught of heavy metal against squishy, gooey flesh with a plethora of colors.

Right from the start, the picture is inundated with sumptuously rich greens, plush electrifying blues, and splendid full-bodied reds, energizing the insane visuals with the feel of a Saturday-morning cartoon. The senseless mayhem mesmerizes with a flamboyant, luxuriant array of secondary hues, which bathe the action with a dazzlingly hypnotic vigor. The Jaegers, of course, are stunning to behold in Dolby Vision, such as the polished deep red of Guardian Bravo, the burnished cobalt shade of Gypsy Avenger, the beautiful pearlescent cerulean of November Ajax or the shiny metalized orange of Saber Athena. However, the most eye-catching is the abundance of neon pastels, from the colorful glow of the signs decorating the city skyscrapers to the gleaming arctic blue of the Kaiju blood, which is distinctly different from the Jaeger weapons that show a lighter teal shade. Most impressive has to be the actual breach where viewers can be bewitched by the ecstatic mix of blistering yellow, fiery orange, vibrant crimson and flaming magenta.

Looking significantly brighter than its HD SDR counterpart, the 4K presentation also comes with pitch-perfect contrast that's consistent and well-balanced while also delivering intensely hot, radiant whites, from the super-hygienically clean suits of Liwen Shao and the bright sterile labs to the luminously brilliant glow of various light sources and the soft, fluffy clouds. Sadly, specular highlights are somewhat hit or miss with those aforementioned lights blooming enough to overwhelm the finer details, but overlooking that, the brighter accents provide the Jaegers with a realistic shimmer even during the fast-moving action, each spark from the metal-on-metal punches with a discrete twinkle and show a distinct difference between the white centers and surrounding blues of the electrified weapons and Kaiju blood. A personal favorite scene is Jake's speech just as the team is about to launch into Tokyo where the sun shines and bounces off the metallic parts of the uniforms, the Jaegers, the Shatterdome platform and glimmers off the clouds in the sky with such an amazing picturesque quality that it almost feels like a real photo from the set.

Brightness levels are extraordinarily rich and luxurious with inky, oozing blacks that reveal superb gradational variances between the numerous shades, nicely separating the gear and straps from the rest of the uniforms. Silky, midnight shadows penetrate deep into the screen without hampering the finer aspects of the background, providing the 2.39:1 image with a stunning, cinematic appeal and three-dimensional quality. Shot exclusively on the Arri Alexa camera system with a max 3.4K resolution, the freshly-minted transfer, upscaled from a 2K digital intermediate, arrives in the nick of time with razor-sharp definition in every scene. From the rust stains on the metal walls of the recruit barracks to the ultra-fine stitching of the uniforms, fine lines and objects receive an appreciable uptick, minor as it may be. Viewers can also enjoy better visibility of information in the far distance, and the tiniest scratch and war wound on the Jaegers is striking and highly detailed. Facial complexions appear healthy and accurate, revealing every pore, wrinkle and negligible blemish in the entire cast, making the sci-fi action sequel pure eye-candy if for nothing else. However, as is often the case, the Dolby Vision also comes with several blatant instances of aliasing along the sharpest edges, keeping the presentation grounded from earning reference-quality marks. (Video Rating: 92/100)

The fight against the apocalypse readies for battle with a fantastic, highly-satisfying Dolby Atmos soundtrack that'll have the house feeling exhausted from the bonkers pandemonium. The screen is continuously showered with a variety of background activity fluidly moving across the three-front channels and convincingly into the front heights, generating a highly-engaging and awesomely broad half-dome soundstage. A dynamic and extensive mid-range exhibits excellent detailing and separation during the loudest, ear-piercing moments, allowing for distinct, audible clarity in the metal-on-metal mayhem and every bone-crunching punch while the hollow, reverberating roars of the Kaiju penetrate deep into the room. Amid the uproar, vocals remain precise and well-prioritized at all times.

Every time chaos erupts on screen, glass, gravel, dirt, and metal debris shower from directly above the listening area and rain down the surrounds, creating a terrifically immersive hemispheric soundfield. Other atmospherics also echo and convincingly pan across the overheads with amusing effectiveness, but the best moments are when they are employed to give the Jaegers and Kaiju a better sense of size and perspective, flawlessly moving from the rear to front heights and into the screen or vice versa. Unfortunately, the low-end surprisingly is not as aggressive or earth-shattering as expected, especially when compared to the first movie. Granted, there is a great deal of hard, commanding bass to enjoy, providing the gigantic action with plenty of weight and presence, but it's not at the room-energizing, wall-rattling and seismic intensity the visual would imply. Nonetheless, I can't imagine many complaining, and in the end, the object-based mix delivers several demo-worthy moments. (Audio Rating: 93/100)

The same set of special features found on the Blu-ray can also be enjoyed on the Ultra HD disc.

Bridge to Uprising (4K, 5 min): Cast & crew interviews on connecting the sequel to the first.

The Underworld of Uprising (4K, 4 min): Discussion on the first act & surviving in the aftermath.

I Am Scrapper (4K, 3 min): Brief look on the small Jaeger and its role in the movie.

Secrets of Shao (4K, 3 min): Focused on the ruthless businesswoman.

As a direct follow-up to Guillermo Del Toro's 2013 sci-fi mecha actioner, Pacific Rim Uprising is relatively satisfying, sure to meet expectations of hardened fans while leaving others wanting more. Starring John Boyega and Scott Eastwood, the sequel is pure popcorn escapism, placing more attention on the robot-vs-monster pandemonium than on character development or a thoughtfully engaging plot. The 4K Ultra HD Blu-ray brings the gigantic mayhem with a gorgeous Dolby Vision presentation and an awesome Dolby Atmos soundtrack. A small but nonetheless informative set of supplements rounds out the package and worth a look for fans, as well as those hungry for more demo-worthy HDR goodness.

Sale Price 14.54
List Price 22.98
Buy Now
3rd Party 6.98
In Stock.
See what people are saying about this story or others
See Comments in Forum
Previous Next
Pre-Orders
Tomorrow's latest releases