A western in name only, Hostiles focuses on racial prejudice as it tells the tale of a bitter, bigoted army captain tasked with returning a Native American war chief to his homeland in a dark, brooding, and ultra-violent manner. The 4K UHD presentation features a lush, beautifully crisp, yet overly dark video transfer, terrific audio, and a comprehensive behind-the-scenes documentary. Hostiles may not satisfy fans of traditional westerns, but it’s still Worth a Look.

You can also check our standard Blu-ray review HERE.

Take Apocalypse Now and transfer it to the American West and you've basically got Hostiles, the latest character-driven drama from writer-director Scott Cooper. Yet this journey across rugged terrain that exposes the dark recesses of the human soul lacks the flash and fury of Francis Ford Coppola's psychedelic epic, despite its excessive violence and potent themes. Like Cooper's other films (Crazy Heart and Out of the Furnace chief among them), Hostiles feels too carefully and preciously constructed, as if every scene is designed to produce an indelible "moment." The poetic script often rings true, but we don't need to cherish each line of dialogue and every significant look or reaction shot. Ultimately, too much introspection stymies what should be a taut action movie, and the lack of narrative drive winds up distancing us from an intimate and important tale.

As blatantly stated on the cover art, the film promotes the idea that “we are all hostiles” (the line is adapted from a quote by Theodore Roosevelt that opens the movie), and the violent, bigoted impulses that propel the human race will one day destroy it, unless we can all find common ground. Army Captain Joseph Blocker (Christian Bale) epitomizes that anger and wears it like a badge of honor. Borne from decades of witnessing senseless deaths - first in the Civil War and later at the hands of marauding Native Americans waging desperate battles to protect their land and preserve their identity - it spreads inside him like a festering disease, and he can barely contain it when he’s ordered by his commanding officer at Fort Berringer, New Mexico in 1892 to escort Yellow Hawk (Wes Studi), an imprisoned Cheyenne war chief who has just received a government-mandated release, back to his native land in Montana. Riddled with cancer, Yellow Hawk wants to die at home, but the damaged, bitter Blocker blames him for the slaughter of several of his comrades and can barely stomach the sight of him.

Threatened with the loss of his pension (as well as a court martial), Blocker reluctantly accepts the mission and assembles a posse to accompany him. Not long after they embark, they come upon the charred remains of a small ranch and find the grief-stricken, delusional Rosalee Quaid (Rosamund Pike) quivering in a barn. A roaming band of Comanches recently murdered her husband and three children, and after Blocker and his men gain Rosalee’s trust and help her bury her brood, they promise to find her a safe haven. As the caravan traverses the unforgiving desert, it’s beset by more violence, but the shared struggles begin to bridge the gaping chasm that separates Blocker and Yellow Hawk, who slowly realize they’re not as different as their backgrounds, traditions, languages, and skin color might suggest. Rosalee also fosters a kinship with the tribe, as everyone on this journey of discovery learns hard truths about themselves and mankind.

Racial issues dominate Hostiles, which preaches tolerance and equality with a heavy hand. The timeless message certainly bears repeating in our current climate, which is dominated by arguments over immigration, refugees, and discrimination, yet while Cooper hammers home his points, does he do so at the expense of producing a good western? Gorgeous scenery and meticulous attention to period detail aside, Hostiles often feels like it’s trying to adapt to the genre, just as Blocker tries to adapt to a changing world in which he feels he no longer fits. Building a movie around a message is tricky business, and Cooper often gets lost in the weeds. Western clichés can be corny, but a few of them are necessary to provide context, and by refusing to embrace them, Hostiles sometimes feels as isolated and adrift as its main character.

No doubt about it, this is a well-made motion picture, but I had trouble connecting to it. The characters feel too remote, the mood is too somber (I don’t think Bale cracks a single smile during the whole movie), and the entire enterprise exudes an off-putting air of self-importance. Bale is a very good actor, but his work here is overly studied and mechanical. Everyone, in fact, walks around in what seems like a traumatized stupor, making it hard to feel anything but numb even during scenes of graphic violence (of which there are too many). Only Ben Foster, as a disgraced sergeant who arrives in the movie too late and departs too early, registers much of a pulse.

Deliberate pacing is a hallmark of Cooper’s films, and it often puts a drag on them. He draws vivid characters, yet prefers to expose their ticks and quirks rather than craft an exciting narrative. Hostiles includes several thrilling sequences, but after the opening assault on the Quaid family, they lack visceral impact. This is a film that probably needs to be seen several times to absorb all the subtleties and gain a complete understanding of the characters, but I don’t believe I’ll ever have the patience or desire to perform such a task.

Hostiles isn’t your father’s or your grandfather’s western. And despite its good heart, admirable ideals, and noble aspirations, that’s a shame. 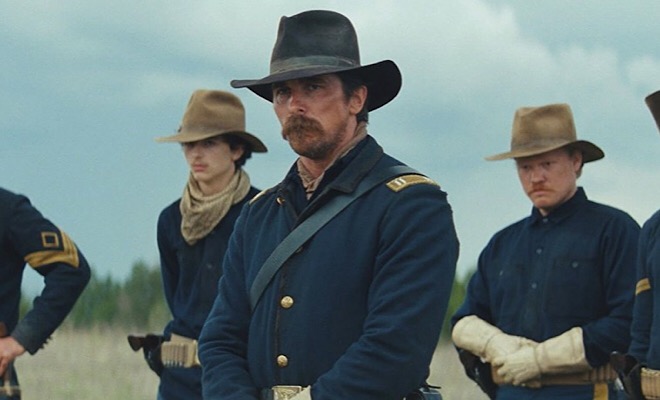 Hostiles arrives on 4K UHD packaged in a standard black eco-case inside a sleeve. A Blu-ray disc and a leaflet containing the code to access the Digital Ultraviolet copy are tucked inside the front cover. Video codec is 2160p/HEVC H.265 and audio is DTS-HD Master Audio 5.1. Once the disc is inserted into the player, previews for The Hurricane Heist, 47 Meters Down, and Friend Request precede the full-motion menu with music. (Note: The pictures accompanying this review are not screen grabs from the UHD disc; they are merely stills from the film.)

The difference between the 4K UHD transfer of Hostiles and its Blu-ray counterpart is like night and day, but not necessarily in the manner in which you may think. Yes, the clarity and contrast on the UHD’s 2160p/HEVC H.265 rendering is markedly better, but the 4K transfer looks far darker than the Blu-ray. Natural light is often employed during nocturnal scenes and in dingy interiors, which tends to obscure fine details and produce numerous instances of crush. The lush cinematography that often exudes a pleasing warm glow complements the stunning vistas of both the Southwest deserts and Northwest forests. The red rock formations set against verdant evergreens often produce glorious images. Details are abundant in the wood grain, the textures of costumes and rocks, and interior adornments, and vibrant hues make elements like warpaint, foliage, blood, the shiny hides of horses, and the landscape’s dusty red clay pop. As expected, close-ups are razor sharp; subtleties like wisps of hair and fine blemishes are visible, and absence of grain lends the picture a smooth finish. No marks of any kind sully the pristine source material and no digital enhancements could be detected. Were it not for its overly dark appearance, this transfer would earn a perfect score, but despite this one deficiency, it remains a strong, vital effort that transports the viewer to another time and place.

Details abound in the well-balanced, crisply rendered DTS-HD Master Audio 5.1 track. From crackling flames, babbling brooks, jangling chains, and footsteps crunching in the sand to chirping crickets, gentle breezes, piecing gunfire, and horse hooves galloping across the wild terrain, the audio always sounds lifelike and helps to fully immerse us in the rugged atmosphere. Palpable surround activity and distinct front-channel stereo separation produce a wide, enveloping soundscape, while strong bass frequencies supply welcome weight and booming accents. An expansive dynamic scale fully embraces Max Richter’s music score, which benefits from superior fidelity and tonal depth, and no distortion or surface noise mar the mix. Some of the dialogue is so soft-spoken it can be difficult to comprehend, but that’s the only hiccup on this impressive, beautifully modulated track.

The only disc supplement is the in-depth, three-part, 63-minute documentary, A Journey of the Soul: The Making of Hostiles. Writer-director Scott Cooper dominates the lengthy piece, which also includes interviews with Bale, Pike, Studi, and other members of the cast and crew, as well as plenty of behind-the-scenes footage. Cooper stresses he wanted to make Hostiles on his own terms, notes he wrote the script expressly for Bale, and points out the film is a western ”only in era and locale.” He also says he tried to avoid western cliches and focus more on character. Other topics include the New Mexico locations, set and costume design, and the actors’ approach to their respective roles. If you’re a Hostiles fan, you’ll certainly appreciate this well-made, comprehensive documentary, but the casual viewer may find it rather cumbersome.

Dark, brooding, violent, and a bit lethargic, Hostiles paints a bleak portrait of a racially divided America through the prism of the Old West. Though the highly charged story of a bitter, bigoted army captain ordered to accompany a recently freed Native American war chief back to his Montana homeland takes place in 1892, it’s tough not to draw parallels to the racial turbulence afflicting our contemporary society. Writer-director Scott Cooper’s powerful, yet strangely numbing western adopts a self-important tone as it plods along and promotes its agenda, leaving the joys of the genre behind. Lionsgate’s 4K Ultra HD Blu-ray presentation features a lush, beautifully crisp, yet overly dark video transfer, terrific audio, and a comprehensive behind-the-scenes documentary. Western fans looking for the next Unforgiven will be disappointed, but despite its flaws, Hostiles is still Worth a Look.

Sale Price 19.99
Buy Now
3rd Party 18.99
In Stock.
See what people are saying about this story or others
See Comments in Forum
Previous Next
Pre-Orders
Tomorrow's latest releases