Source Code is an elevated sci-fi thriller that deftly balances subjects like post-9/11 paranoia, alternate realities, and our innate desire for second chances and human connection... all in a fast-paced movie about a soldier trying to stop a terrorist attack. This Ultra HD Blu-ray boasts a sparking 4K Dolby Vision transfer that may have been over-sharpened just a tad, one new bonus feature, and an excellent, upgraded Dolby Atmos mix. Recommended.

What if you could go back to relive the last eight minutes of another person's life?

Welcome to the Source Code, an experimental government program that places U.S. Army pilot, Captain Colter Stevens (Jake Gyllenhaal), into the mind and body of mild-mannered teacher, Sean Fentress, during the last eight minutes of Sean's life. Fentress and a hundred of his fellow passengers died this morning on a Chicago-bound commuter train when a terrorist detonated a bomb. Worse, there's another bomb still out there. A bigger bomb. Meaning, if Captain Stevens fails to traverse the Source Code, reliving the last eight minutes of Sean Fentress' life over and over and over again, to uncover the bomber's identity... thousands, maybe even a million people, will die.

On the surface, Source Code seems like Rod Serling and Alfred Hitchcock collaborated to make a dramatic version of Groundhog Day. Despite this structural hook, Source Code is a fast-paced and emotional thriller. Written by Ben Ripley and directed by Duncan Jones, the story hurtles forward with a deft mix of mystery, suspense, and disorientation. Much like our main character, we too wake up in the body of a school teacher on a train destined for tragedy and need to learn the truth about where we are, why we're here, and whether or not we can make a real change in our life and the lives of a hundred strangers.

More than a thriller with a tight structure and pulse-pounding set-pieces, Source Code also explores compelling emotional drama, asking its characters and the audience what they and we would do if given a second chance to live life differently? Would we apologize to a father after a fracturing argument? Would we finally ask a crush out on a date? Do we look at the strangers around us as potential enemies or people who we can help have nothing more than a slightly better day?

In revisiting Source Code for this review, a few things do stick out as dated ("do you have the Internet on your phone?"), but overall this grounded sci-fi thriller is as engaging in 2018 as it was seven years ago when it first debuted in cinemas. If you've yet to see this movie, please do seek it out. And, for a more in-depth review of the film, please check out the original Blu-ray review HERE. Or read Roger Ebert's review because we all miss him terribly. 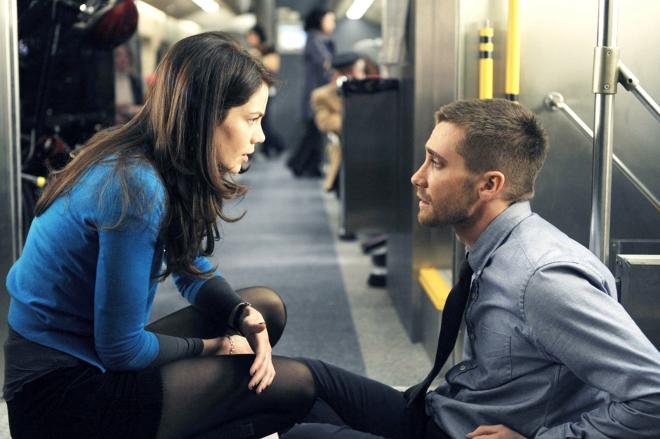 Source Code arrives on 4K Ultra HD Blu-ray as part of a two-disc edition that includes one 4K Blu-ray, one Blu-ray, and an Ultraviolet digital copy code. Worth noting: the Blu-ray in this set appears to be the same disc as the original Blu-ray printing (although the solid coloring on the disc itself is a slightly different shade of blue). Also, as we write this review, Source Code is only available in HD on VUDU or iTunes, so we haven't attempted to redeem the digital copy yet.

Enter the Source Code again and again with a sparkling 4K HEVC encode -- with Dolby Vision and HDR10 -- that is framed in the film's 1.78:1 aspect ratio.

Shot on a combination of film and digital cameras, Source Code was originally finished with a 2K DCI, but here makes a more-than-satisfactory leap to 4K Ultra HD Blu-ray with HDR and wider color gamut capabilities. I'll start with the flaws because they are small nitpicks. First, the upscale process may have over-sharpened things just a tad, as I experienced a bit of ringing along the textures of skyscrapers and the film's exterior train shots. Also, for those limited to HDR10 playback and who don't have a higher end display, you may get a little shadow crushing (if you have Dolby Vision, you should be okay, but I can't speak to every display). Lastly, while the colors are naturally bolder and more vivid than the 1080p SDR Blu-ray, the movie itself is, by design, not very colorful and, therefore, doesn't really pop in that way. Still, minor complaints.

For a seven-year-old movie finished in 2K, Source Code looks brand new on Ultra HD Blu-ray. Noticeably sharper than the Blu-ray, this 4K version offers an embarrassment of fine details (and riches). Looking at the actors' faces, you can see all the pores on their faces, and the textures of the film's many metallic sets. Highlight details are also improved, given audiences more information around glinting sunlight reflections and during the various explosions. Speaking of those, while some of the CGI elements haven't aged well, the wider color gamut enhances each fireball. Blue skies and visible greens also get a nice boost. Black levels and shadow details are on point as well.

Overall, Source Code isn't a crazy-amazing upgrade over the Blu-ray, but it is an upgrade none-the-less the movie has never looked better.

Starting with the standard things, Source Code offers a clean balance of dialog, sound effects, and music (score by Chris Bacon). Along with its mind-bending visuals, the film uses sound to pull us into and out of the Source Code itself. We hear these same sounds -- coffee spilling, characters speaking, approaching trains -- over and over in new ways and new places. All of it is nicely arranged with a good sense of fidelity and dynamic range. Explosions and guns shots and drum beats land well with a solid LFE presence, although we've heard deeper rumblings from more aggressive mixes.

Moving on to the Dolby Atmos-specific qualities, let's talk about overhead sound usage and overall immersion. Source Code does a nice job of pushing effects and music elements over and around the listener, revealing many intricated details to immerse you each time Captain Stevens enters or exits the Source Code. Mr. Bacon's orchestra sounds much grander while explosions and screaming brakes swirl up over and around in natural ways that don't shout, "hey I'm a sound mix".  Even more so than the video presentation, this Atmos mix is an identifiable upgrade over the 5.1 mix. It sounds fuller, wider, and taller.

Still, demo-worthy Atmos and DTS:X mixes attack from all around and, given the genre and visuals, overhead and surround articulation could be a touch more engaging, in my humblest opinion.

Kudos to Lionsgate for including actual supplements ON a 4K Blu-ray. Here you'll find the same Audio Commentary from the original Blu-ray plus a two-minute video titled 5 Crazy Details You Might Have Missed featurette, which feels like a video that was originally made for YouTube by someone like Looper or Screen Rant. On the Blu-ray (disc two), you'll find the same Audio Commentary as well as Access Source Code, which we reviewed HERE.

Outside of a few dated tech concepts ("do you have the Internet on your phone?") and CGI effects, Source Code remains a thrilling, high-concept grounded-sci-fi thriller with a compelling emotional core. This 4K Ultra HD Blu-ray offers up a sparkling 4K Ultra HD Dolby Vision presentation (HDR10 too) and one new, short bonus features, but the real upgrade here is the new Dolby Atmos soundmix.  Whether you've never seen Source Code before or are a longtime fan, this release is Recommended.

Sale Price 17.99
List Price 22.99
Buy Now
3rd Party 13.45
In Stock.
See what people are saying about this story or others
See Comments in Forum
Previous Next
Pre-Orders
Tomorrow's latest releases