After a tragic accident two stage magicians engage in a battle to create the ultimate illusion whilst sacrificing everything they have to outwit the other.

Similar to what he did seven years earlier with his neo-noir psychological thriller Memento, Christopher Nolan aims to astound and amaze his audience with a big reveal or unexpected twist at the end. And on the surface of it, The Prestige is little more than a constant build-up towards that goal, which is as satisfyingly effective as it is misleading and dishonest because, in the end, the whole trick is deceptively simple. But as Michael Caine's stage engineer John Cutter explains, that's ultimately the whole point of watching and enjoying a good magic trick. It's a carefully orchestrated deception designed for the sole purpose of entertaining the audience, of bewildering the imagination with wonder and spectacle. We enter the deception of our own accord and, for a moment, voluntarily suspend the rational, skeptical side of our brain, inviting the illusion and daring the magician to swindle us. When understanding this basic logic and the true meaning of Cutter's words, we discover the mystery drama is a wildly innovative love-letter to the magic of cinema itself.

In this setup, the screen is the stage, the director is the magician and the film is the illusion. And like any good illusionist – as Cutter and Scarlett Johansson's Olivia point out – the performance is as equally important as the trick itself. The magician should be capable of making the audience let go of reality and be transported to an imaginary world unfamiliar to their own, say, something like 19th Century Victorian London. The talent, then, is in one's ability to cleverly misdirect the audience's gaze, expecting one result but giving them another. Perhaps making them believe a story is told from the perspective of two protagonists, a pair of rivaling stage magicians The Great Danton (Hugh Jackman) and The Professor (Christian Bale), but it's actually from one. In Caine's voiceover introduction, he even breaks it down into three elements, parts or acts where the climax is arguably the most important because we're left astounded and reminded we were duped all along. And when we revisit the trick again, watching with a more critical eye, we may uncover the devil hiding in the details, possibly revealing the trickery employed for deceiving us, but that's okay. If done well, it only makes up appreciate the illusion more. 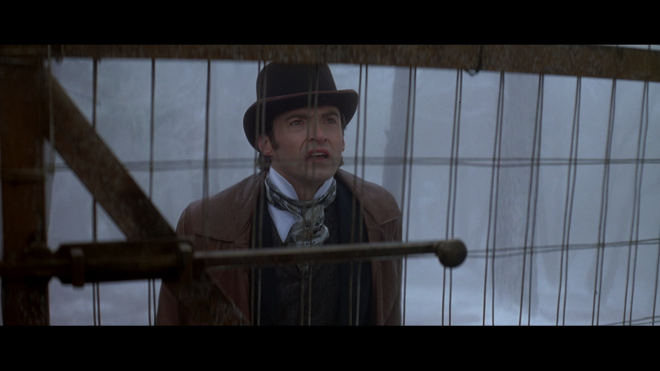 Walt Disney and Warner Home Entertainment have joined forces to bring The Prestige to 4K Ultra HD Blu-ray as a two-disc combo pack with an UltraViolet Digital Copy code, which can be redeemed via RedeemDigitalMovie.com, MoviesAnywhere or VUDU, giving users access to the 1080p HDX version only. Inside the black, eco-vortex case with a glossy slipcover, the dual-layered UHD66 disc sits comfortably opposite a Region Free, BD50 copy. At startup, viewers are taken directly to a static screen with the usual selection along the bottom and music playing in the background.

Magic and illusions amaze on 4K Ultra HD Blu-ray with a great-looking and often lovely HEVC H.265 encode. Sadly, the show is not quite up to the highly-competitive level of its predecessors, coming in a bit short of truly astounding the audience. Naturally, overall clarity and definition receive a welcomed uptick, revealing a bit more info in the background, such as when characters walk through the streets and neighborhoods of Victorian London. Not only can we count the bricks of buildings outside and clearly see the exposed wooden laths behind the crumbling plaster, but we can distinctly make out the stitching and threading of the fabric used for the costumes. Faces are often lifelike, showing individual pores and the smallest, negligible blemish. However, a good portion of the 2160p video appears fairly soft with a few blurry moments scattered about, some of which occur during the magic shows or one of Tesla's experiments. Originally shot on traditional 35mm film, this transfer, in the end, seems like an upconvert of the master used for the Blu-ray, but the results are significant enough to be quite satisfying and will surely please fans.

Presented in its original 2.35:1 aspect ratio, contrast, on the other hand, offers a slightly more noticeable upgrade, making for a tad brighter and more energetic 2160p video though not by a substantial margin. Nevertheless, Wally Pfister's photography enjoys a crisper, more dynamic appeal that displays cleaner, pitch-perfect whites in the fluffy clouds, some articles of clothing and the spotlights of the stage. Specular highlights also receive a welcomed upgrade, appearing slightly tighter and punchier, especially in the lightning bolts firing off Tesla's machines. However, there is some loss of finer details within the brightest, hottest areas, such as when The Great Danton performs on stage and sections of his outfit disappear beneath a glob of white. In spite of this, excellent brightness levels deliver richer, inkier blacks that penetrate deep in the screen, providing the image with great dimensionality and a lovely cinematic quality. Shadow detailing is also exceptional with passing gradational differences between the various shades.

Like many of Nolan's other films, the overall palette tends to feel somewhat limited due to the stylized cinematography, washing the screen in a warmer yellow-amber tone that's made all the more noticeable here, especially during many low-lit interior shots. Nevertheless, the film benefits greatly from a wider color gamut, energizing some of the lovely pinks and magentas lining the clouds in a couple shots or providing flesh tones with a more realistic reddish hue. That last part isn't always consistent, as faces can suddenly seem paler from shot to shot, but complexions appear more lifelike and natural overall. Interestingly, blues are observably brighter and illuminating, making the electrical currents flying in the air really sparkle with brilliance, and reds are of a slightly deeper shade, but greens show little improvement though remain accurately rendered. But in the end, awash in a welcomed thin layer of grain, Nolan's mystery thriller gains a new lease on life in this 4K presentation.

A pair of competing magicians pulls the rug from under their audience with a lovely assistant named 5.1 DTS-HD Master Audio (48 kHz/24-bit) at their side. And comparatively speaking, the new track does not reveal any discernable difference from its uncompressed PCM soundtrack (48 kHz/24-bit) enjoyed on the Blu-ray, which is not a bad thing since I personally love the sound design and still find it an exceptional complement to the visuals. With cleanly distinct and precise vocals in the center, the soundstage exhibits outstanding clarity and balance across all three channels with marvelous separation and definition during the loudest, most electrifying moments. Speaking of which, the stage performances fill the room with the cheers and applause of the audience, but things truly come alive every time Tesla's machine is fired up with effects that splendidly lend themselves to the receivers' Dolby Surround or DTS: Neural:X up-mixing functionality, effortlessly spreading many atmospherics into the overheads. Added to that is an awesomely robust and highly responsive low-end that provides a nice rumble and oomph to those electrifying magic tricks.

On the surface of it, Christopher Nolan's The Prestige is the tale of rivaling stage magicians played by Hugh Jackman and Christian Bale in late 19th Century Victorian London, feeling as though tracing a pivotal era in the history of modern illusionists leading to Harry Houdini. At the same time, the mystery drama is a deceptively clever and wildly innovative love-letter to the magic of cinema where Nolan essentially suggests the effectiveness of a film and good storytelling is akin to the success of a good magic trick.

A pair of competing magicians amaze on Ultra HD with a great-looking and often lovely 4K video presentation even though it's not quite the showstopper as other Nolan UHD releases. The audio has been reimagined as a DTS-HD soundtrack, but it doesn't show any discernable difference to the PCM track on Blu-ray. With the same set of supplements ported over, the overall package is recommended for fans of the film, the director or simply hunger for more 4K HDR goodness.