Dom Cobb is a professional thief with a difference: the spoils he goes after are not material objects but the thoughts, dreams and secrets buried in the minds of other people. This rare talent has cost him dear, rendering him a solitary fugitive stripped of everything he ever really cared about. When he is offered a chance for redemption by reversing the process and planting an idea rather than stealing it, he and his team of specialists find themselves pitted against a dangerous enemy that appears to pre-empt their every move.

Many of the concepts, ideas, and themes explored in Christopher Nolan's Inception are neither novel nor wholly original. We've seen several films feature plots involving dreams-within-dreams and questions about differentiating reality from illusion. The difference is he navigates through his premise as a powerfully spellbinding, visually striking and ultimately brilliant heist drama only meant to carry the appearance of something like a highly complex, puzzling labyrinth. It's a deceptively simple and stylishly elementary production that only looks smart but is not. Like any really good crime caper, the show is all about the extraordinarily elaborate set-up and the big, gratifying pay-off, which in this case is inserting the valuable property instead of removing it. Cobb (Leonardo DiCaprio) and his partner Arthur (Joseph Gordon-Levitt) are the ringleaders orchestrating the whole thing, along with forger Eames (Tom Hardy), chemist Yusuf (Dileep Rao) and architect Ariadne (Ellen Page). They were hired by mysterious magnate Saito (Ken Watanabe) to ruin the empire of his rival now owned and operated by Robert Fischer (Cillian Murphy).

Over the years, after many viewings and audiences contemplating it more, the movie has grown into a piece of a larger puzzle, something fitting neatly into Nolan's oeuvre and his particular interest in cinema as a whole. Similar to what he did in The Prestige, the film is fundamentally a subtle commentary on the filmmaking process where Cobb plays the role of film director, Arthur the producer, Ariadne the writer, Eames the actor, Yusuf the special effects artist, Saito the investor and Robert the audience. Cobb and Ariadne's conversation outside the Parisian café is most telling of Nolan's true aspirations. The entire sequence is a breakdown of how to tell a story and rouse the imagination with an idea that will affect the audience, which in this case is Cobb, as the main protagonist, living in the past and carrying the guilt of failing his wife Mal (Marion Cotillard). The concept of dreaming in layers is essentially digging deeper into a film's story until the emotional core of the plot is finally revealed or feeling as though the climax is earned. The final scene with the spinning top is then a nice nod to the audience interpreting a film as they wish. 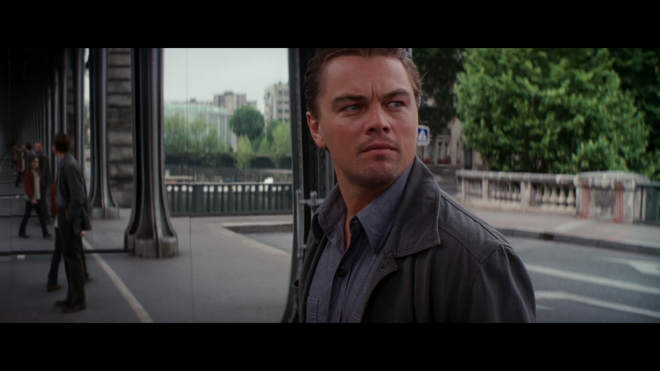 Warner Home Video brings Inception to Ultra HD Blu-ray as a three-disc combo pack with an UltraViolet Digital Copy code, which can be redeemed at WB.com/redeemdigital and made available in HD SDR via MoviesAnywhere. But the same code can also be redeemed via VUDU.com where users have access to the UHD with Dolby Vision, which is the route I took. The triple-layered UHD100 disc sits comfortably opposite a Region Free, BD50 copy stacked above a third BD25 disc containing supplements. All three are housed in a black, eco-cutout case with a glossy slipcover. At startup, viewers are taken to a screen that commences with a video clip before going static with the usual options along the bottom and music.

Nolan's visual wonder aims to plant an idea on 4K Ultra HD with a great-looking and generally satisfying HEVC H.265 encode, but it doesn't quite reach the levels expected in order for it take hold and become something special. Originally shot on 35mm film and 65mm for some action sequences, the supposedly-new transfer fails to render the sort of high-quality results seen in the other Nolan UHD releases, looking considerably soft and blurry during several sequences, suggesting the same master used for the Blu-ray may have been recycled for this. Granted, the fine lines in buildings, surrounding foliage and costumes remain distinct and unmistakable, and facial complexions can be fairly revealing, especially in the close-ups. But, on the whole, the uptick in resolution is pretty slight, and the same minor ringing and low-level noise during high-contrast scenes still persists, an issue that was also present in its Blu-ray counterpart.

Speaking of which, contrast runs much too hot and blistering, pushing the peak luminance to such an extreme that it occasionally looks overcooked. This is most distracting or troubling in scenes with the sun's glare coming though windows or a random source of light shining brightly on an actor's face. Most disappointing is the action sequence on the snowy mountain where there's little distinction or difference between the snow or the militarized uniforms. Such moments tend to engulf certain areas with large blobs of white and ruin some of the finer, more distinct details. There is also little to speak of in terms specular highlights, but the picture has its moments, particularly during scenes with large explosions. Black levels offer a nice improvement, on the other hand, looking quite inky with excellent perceptible delineation in the shadows for the most part. However, there are also a few instances of crushing and very mild posterization with the most egregious being the elevator scene as Ariadne travels into Cobb's dream.

Arguably, the biggest and most appreciated improvement is the wider color gamut, showing a bolder, more vivid array of secondary hues to give the overall 4K presentation a lovely cinematic quality. Staying true to the elegant, polished photography of Wally Pfister, warmly-lit interiors come with a richly-saturated yellowish hue while city exteriors are a glossy, steely blue or slightly subdued for effect. Primaries, on the other hand, only receive a trivial boost but remain accurately rendered and attractive. Flesh tones appear healthy and natural, for the most part, but there are times when actors seem somewhat flushed and sickly while DiCaprio occasionally looks as though he just walked out a tanning booth. There's no denying the 2160p video is a welcomed step-up from its HD SDR counterpart, but the difference is both slight and problematic.

One of the wildest and most imaginative heist films ever breaks into the deep recesses of Ultra HD with the same 5.1 DTS-HD MA soundtrack enjoyed on the Blu-ray. As with the other Nolan UHD releases, an object-based audio option would have been a much-welcomed upgrade. But the lossless mix remains a pure reference-quality aural experience with a splendid array of activity in the surrounds that come alive when applying the receivers' Dolby Surround or DTS: Neural:X up-mixing functionality. As before, the track comes with a powerful, chest-pounding bass line that feels omnidirectional and encompassing.

Christopher Nolan's Inception is a visually striking experience with an engagingly thrilling story involving dream sharing and the subconscious. At its forefront, the film seems overly complex and convoluted, but ultimately, it's a highly dramatic heist drama presented in a way that feels innovative while also serving as one of the most ingeniously clever commentaries on cinema and the filmmaking process.

The Ultra HD Blu-ray attempts to implant an idea with a strong but somewhat disappointing 4K video presentation, but the results nonetheless offer a few noteworthy improvements that'll please some viewers. Dreams come alive with the same DTS-HD MA soundtrack enjoyed on the Blu-ray, and it remains an awesomely thrilling, bombastic aural experience with several demo-worthy moments. With the same set of supplements ported over, the overall package is ultimately worth a look for the most loyal of fans.