In Arizona in the late 1800s, infamous outlaw Ben Wade (Russell Crowe) and his vicious gang of thieves and murderers have plagued the Southern Railroad. When Wade is captured, Civil War veteran Dan Evans (Christian Bale), struggling to survive on his drought-plagued ranch, volunteers to deliver him alive to the "3:10 to Yuma," a train that will take the killer to prison. During the grueling expedition, Evans and Wade, each from very different worlds, begin to earn each other's respect. However, with Wade's posse on their trail, the mission soon becomes a violent, impossible journey toward each man's destiny.

Even though the Western genre has lost favor with the moviegoing public in recent decades, it's easy to see why filmmakers continue to find it fertile ground for drama. Its grand, mythic themes appeal to a fundamental storytelling instinct, and there are so many to work with: good vs. evil, order vs. anarchy, nature vs. civilization, man vs. his own basest instincts, and the very birth of the American society as we know it. All these and more can be wrapped up in easily digestible morality tales set against vast expanses of beautiful scenery and filled with rip-roaring shoot-'em-up action. Rugged cowboys face off against charming outlaws, blazing a path through the wild untamed frontier with six-shooters, rifles, and dynamite. What's not to love? And yet, by and large, modern audiences remain apathetic to the whole thing, convinced that Westerns were their granddaddy's genre and offer little of interest for them. Most of the same themes have since been transplanted to the science fiction realm to bigger box office results. But the filmmakers keep trying, and every few years a notable director will mount a revival of the format. The most successful, like Clint Eastwood's Unforgiven or the HBO series Deadwood, are typically revisionist, deconstructing the mythic archetypes and iconography of the Old West that had been burned into the collective cinematic consciousness for more than a century now.

The latest attempt to bring back the Western comes from director James Mangold (Cop Land, Walk the Line), and has few such pretensions. His remake of 3:10 to Yuma (based on an Elmore Leonard short story last adapted to screen in 1957 with Glenn Ford and Val Heflin in the leads) is an old-fashioned two-fister, pitting an honest do-gooder against a dangerous outlaw in a battle of wills. In this go-round, Christian Bale is the struggling rancher Dan Evans, a simple man up to his eyes in debt and desperate to hold his family together. When the notorious train robber Ben Wade (Russell Crowe, oozing charisma) is finally captured, Dan volunteers to be part of the posse escorting him to the town of Contention, where the 3:10 train will cart him off to prison in Yuma for trial and hanging. For this, Dan will be paid the sum of $200 by the railroad company, a small fortune that should get him through another season of drought. The problem he faces is that Ben's gang, headed by trusted lieutenant Charlie Prince (Ben Foster), wants their leader back, and are ready to gun down anyone who gets in their way. 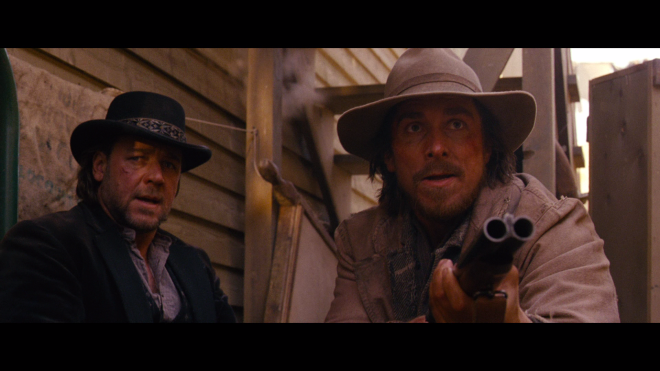 Bale and Crowe deliver terrific performances, each man fully inhabiting their three-dimensional characters with complex moral values and complicated emotional lives. Joining them are Peter Fonda, unabashedly channeling John Wayne as a grizzled Pinkerton agent with a grudge against Wade, and Alan Tudyk (Serenity, Dodgeball) as a small town doctor hopelessly out of his depth in this posse of rugged fighters. Tudyk has few lines but steals many scenes with his attempts to hide a wide-eyed innocence behind a façade of gruff bravado. Truly standing out even from this cast, however, is Ben Foster as Wade's flashy, amoral second-in-command, strutting through the picture with a cocky self-assurance and an air of invincibility. It's a flamboyant performance that could have gone over the top, but is dialed back just enough to remain well modulated among the rest of the main players.

The movie has a fairly simple and straightforward story, charged by the cracking performances and peppered with exciting shootouts. It's an entertaining ride, held back from greatness by a few significant flaws. The first is that Wade's personality and behavior are inconsistent; he's meant to be a sensitive soul as well as seductively evil, but the script has him veering too radically between the extremes, with the motivation for some of his actions at the end unconvincing. The big climax also veers into silly action movie territory, with thousands of bullets fired in a confined space while the heroes duck and dodge and rarely does anyone get hit. But beyond all that is one simple question that unravels the entire plot: Why don't they just shoot him and be done with it? Undoubtedly the filmmakers have all sorts of elaborate justifications for why the characters want to keep Wade alive (Evans is too morally righteous to kill a man in cold blood, for example), but realistically they don't hold up to scrutiny in such an environment, and one bullet could have spared everyone a lot of trouble.

Lionsgate Home Entertainment brings 3:10 to Yuma to 4K Ultra HD Blu-ray as a two-disc combo pack with a flyer for a Digital HD Copy. At the moment, we are unable to verify the correct size of the content, but the triple-layered UHD100 disc sits comfortably opposite a Region A locked, BD50 disc inside a black, eco-cutout case with a glossy slipcover. At startup, the disc goes straight to the main menu with full-motion clips and music.

James Mangold's western retelling jumps on board the Ultra HD train with a great-looking HEVC H.265 encode that offers a noticeable improvement in some areas but not so much in others, making it a bit challenging to properly assess.

Most apparent is the fact that this 4k presentation is not really any sharper than its HD counterpart, showing several soft, poorly-resolved segments throughout. Of course, much of this blurriness could be the result of being shot on traditional 35mm film and the stylized photography of Phedon Papamichael. Then again, this could suggest producers recycled the same 2K digital intermediate as before rather than remastering the original elements. However, the overall quality remains an upgrade over the Blu-ray version, showing slightly better detailing in the clothing, the Victorian furniture and various wooden structures. Sadly, it's not the night and day difference some fans and enthusiasts were probably hoping for.

On the other hand, the transfer benefits from the jump to UHD where it matters mosts, the area where viewers can really appreciate the format, tempting them to join Wade's outlaw crew. The picture is noticeably brighter thanks to the higher dynamic range, displaying a more brilliant and intense contrast while the whites of clothing and bedsheets appear cleaner and more luminous. There tends to be a tad of blooming around the faces and a few random items, but thankfully, it's not too egregious as to ruin the finer details. On the whole, the specular highlights around the edges of clouds and metallic objects radiate with realism, making the many panoramic views of New Mexico looks beautiful.

Black levels are also noteworthy, looking darker and more true to life than before to provide the 2.40:1 image more depth without overwhelming the shadow details. Better still, the 2160p video comes with a richer color palette that better suits the hot climate, giving the cast a slightly redder, sunburnt look that feels accurate and natural. Although largely favoring brown earth tones, there is the occasional flashes of pinks and magentas in the morning clouds while the late afternoons are engulfed in a gorgeous array of yellows and oranges. One of the best moments are the nighttime sequences when the group rests for the night, and the intense fiery glow from the fire showers the entire frame while the shadows in the background penetrate deep in the screen. Along with a thin layer of visible grain throughout, providing the 4K presentation with an appreciable film-like quality, the UHD makes for a nice upgrade.

The western favorite also arrives on schedule with a shiny but deadly DTS:X soundtrack, which on the whole, makes for a nice upgrade over the uncompressed PCM track of its predecessor but not by a huge margin. Much of the action remains as before, across the entire soundstage with distinct clarity in the mid-range. However, with the extra breathing room, the loudest moments are a bit more detailed, as each gunfire comes a more precise resonance and snap while wood debris and fragments are heard shattering in every direction. The low-end also has more of a kick to it, providing a deeper, more responsive oomph to the gunshots and a rumbling roar to the train slowly rolling into town. Amid the mayhem, dialogue reproduction is clear and intelligible.

It's in those same action sequences where listeners will also notice the object-based format's advantage over its lossless counterpart. While the screams of bystanders are heard in the distance, scrambling for cover, gunshots come from every direction and amazingly echo into the overheads, creating an immersive, realistic soundfield. The debris also feels as though raining down from above and around the listening area. The music fills the screen and nicely bleeds into the front heights, and the top rears are occasionally used for discrete ambient effects. It's not always consistent, but the track is an excellent complement to the video.

The same set of supplements are ported over to this release and can also be found on the UHD.

Audio Commentary: Director James Mangold talks extensively about his approach to the material, his creative decisions, aspirations, performances and various other aspects of the production, along with comments of his admiration for the original film.

Inside Yuma: Essentially, a Picture-in-Picture option with a pop-up bar that shows up at various moments during the movie, containing storyboards comparisons and BTS footage for specific scenes.

Historical Timeline of the West: An interactive text detailing specific events of the 19th Century.

From Sea to Shining Sea (HD, 20 min): A good but brief piece on the history of the railroad.

3:10 to Score (HD, 8 min): Composer Marco Beltrami is given a few minutes to share his thoughts and his influences when creating the score.

An Epic Explored (HD, 7 min): Another interview piece with Mangold sharing his thoughts on the appeal of the western genre.

A Conversation with Elmore Leonard (HD, 6 min): As the title suggests, the author talks about his career and some background on the original story that inspired two films.

The Guns of Yuma (HD, 6 min): A closer look at the guns and their history.

A few years later and James Mangold's 3:10 to Yuma, a remake of Delmer Daves's underappreciated western classic, remains just as entertaining as ever, in large part thanks to the performances of Russell Crowe and Christian Bale. The Ultra HD rides into town with very good picture quality and an even better DTS:X soundtrack that will tempt fans into an upgrade. The supplements are the same, but the overall package is recommended for enthusiasts of the format.

Sale Price 14.99
List Price 22.99
Buy Now
3rd Party 9.19
In Stock.
See what people are saying about this story or others
See Comments in Forum
Previous Next
Pre-Orders
Tomorrow's latest releases