In 'The Accountant,' the filmmakers make a genuine attempt at depicting autism with respect and sensitivity. Gavin O'Connor, arguably best known for 'Miracle' but whose 'Jane Got a Gun' went largely ignored last year, goes to extraordinary measures, carefully walking that line between reality and sensationalism. And on several occasions, he and his team choose to go with a portrayal of the complex developmental disability versus embellishment for dramatic effect, revealing a warm and tender side at the core of Bill Dubuque's original script. However, this is not enough to save it from bending truth significantly and being largely unexceptional, despite its interestingly unique premise about a rather exceptional person. 'Rain Man,' 'The Boy Who Could Fly' or 'Adam' this is not, which is not to suggest their representation of a person on the spectrum to be any more accurate. But as a dramatic actioner or an action drama, it's on par with 'Mercury Rising' or Prachya Pinkaew's martial arts flick 'Chocolate.'

And so it is that Ben Affleck's performance as Christian Wolff, a full-time accountant with a seemingly supernatural talent for both numbers as well as different methods for killing people, feels largely wasted. Over the last few years, the actor has proven himself quite the thespian, most recently silencing and astonishing naysayers when he donned the Batsuit last year, while also making his mark behind the camera. Here, Mr. Affleck is the strong and silent type, sitting behind a plain, tidy desk inside a methodically arranged and grayish dull office, softly advising a couple on tax loopholes. Amusing as this introduction is, this isn't the moment Wolff impresses his audience with his unusual mathematical talents. The filmmakers save that for a little later when he's hired by a robotics corporation to audit and iron out some suspicious financial discrepancies. In one night, armed with two boxes of colored markers and glass walls, he sifts through fifteen years of bookkeeping to discover someone has embezzled $61 million. 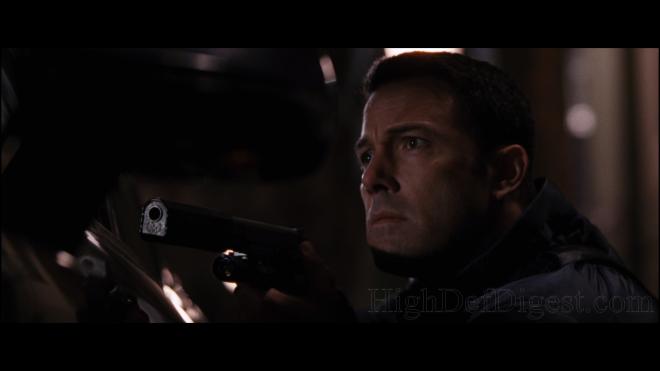 By this point, the audience should be thoroughly impressed by what Wolff is capable of, possibly making a similar facial expression as the company's regular accountant Dana Cummings (Anna Kendrick) when she finds him still working the following morning. Everyone else, including the people who hired him (John Lithgow and Jean Smart), are equally surprised but oddly upset. Unfortunately, for the both of them, the person behind it all — which, shame on the filmmakers for making that too easy to figure out — now needs to move quickly and hide evidence of the crime. This means enlisting some tough and rowdy goons led by Jon Bernthal ('Daredevil'), whose expertise is apparently scaring people into doing his bidding, such as coercing one into self-overdosing with insulin. Scary as Bernthal may be, moviegoers have nothing to fear, for our hero turns out to also be a military trained assassin, shown through flashbacks at the hands of a rather callous father who believed his method more beneficial for managing his son's condition.

And this is where 'The Accountant' encounters some unexpected setbacks and clerical anomalies in its storytelling, along with several other head scratching hiccups that don't quite add up. Despite O'Connor delivering a mildly entertaining crime actioner — fairly pedestrian, to be honest, but maintaining interest until a shocking twist ending that's neither shocking nor satisfying — the director fails to ever generate suspense. Even fight sequences appear robotic and choreographed while shootouts feel like 'John Wick' counterfeits, down to the dead, cold expression of Affleck as he takes out supposedly dangerous mercs with ease. We never doubt or worry Wolff could be defeated or that his enemy might possibly win because his skills are always shown to be superior. Meanwhile, J.K. Simmons makes an appearance in what amounts to nothing more than a speaking walk-on role, adding absolutely nothing significant to the plot. After crunching the numbers, the film is a penny stock not worth investing your time.

Warner Home Video brings 'The Accountant' to Ultra HD Blu-ray on a two-disc combo pack with a code for an UltraViolet Digital Copy. At the moment, we are unable to verify the size of the content, but the dual-layered UHD66 disc sits comfortably opposite a Region Free, BD50 disc housed inside a black, eco-elite case. At startup, viewers are taken to a generic static screen with options along the bottom and music.

'The Accountant' takes a shot at Ultra HD and disappointingly misses the mark, failing to really show much of an improvement over its Blu-ray counterpart.

Coming from a fresh-minted transfer of a 35mm source, the HEVC H.265 encode in HDR10 shows a fair amount of clarity and definition. But on the whole, the picture is noticeably softer compared to other recent 4K releases. Small items in the background and tiny defects on random objects are distinct while hairs and the fabric threading of clothing are highly detailed, and lifelike facial complexions are revealing. The ultra-fine layer of natural grain is made more apparent in the jump to UHD, but it's never intrusive while giving it a welcomed film-like appeal.

Presented in 2.40:1 aspect ratio, the 2160p video also shows a well-balanced contrast with bright, crisp whites, but the overall photography falls on the lower end of the grayscale. This makes for a somewhat dull, drab and slightly grayish look, which noticeably affects other areas of the presentation. Specular highlights, however, are nicely improved, giving the metal of Wolff's various guns and the chrome trim of vehicles a shiny, realistic glow.

Although much of the palette favors a warmer orange-teal approach, as designed by cinematographer Seamus McGarvey, colors feel limited and subdued though primaries remain accurate. Much of the cast for a majority of the runtime appear flushed, pale and sickly, which can be distracting in several areas, especially those set in sunny exteriors. On the plus side, brightness levels are true and generally satisfying with a visible difference between the various shades. However, there are many instances when blacks come off a tad too strong, occasionally engulfing the finer details in the darkest shadows.

More mysterious than the movie itself is why Warner Bros didn't equip the deadly bookkeeper with one of the new object-based audio formats. Instead, the mathematician assassin is armed with the same pair of DTS-HD MA soundtracks — one in a 7.1 configuration while the other in the customary 5.1 surround sound. So, I'll repeat my thoughts expressed in the Blu-ray review.

Nevertheless, the design makes excellent use of the entire  with several atmospherics flawlessly panning from one speaker to the next and from one side of the room to the other. A few other sounds, such as the commotion of city traffic and the noises of local wildlife, travel into the back with ease for subtle ambiance. The best moments, of course, as the few bursts of action and the final quarter of the movie, but on the whole, rear activity is not particularly immersive though effective for a slow-burning crime thriller such as this.

For a majority of the time, the lossless mix is a front-heavy presentation with a broad and welcoming soundstage. Imaging displays outstanding channel separation and balance with convincing off-screen effects and precise, well-prioritized vocals. The mid-range delivers distinct, room-penetrating clarity in the highs, allowing for superb detailing in the score and in each gunshot, ringing throughout the room with impressive realism. The low-end is surprisingly palpable and occasionally authoritative, especially when Christian Wolff fires the .50 caliber BMG sniper rifle, sending a deep, wall-rattling shockwave that's sure to wake the neighbors. There are also a couple moments when bass dips well below 20Hz (bass chart).

Although a decently entertaining crime actioner, 'The Accountant' is not a wholly satisfying experience, exposing some minor, unexpected setbacks and clerical anomalies in its storytelling. Starring Ben Affleck, Anna Kendrick and John Lithgow, the movie is rather unexceptional as it tries to blend the realities of a complex developmental disability with fantasy. For this Ultra HD Blu-ray edition of the film, Warner Home Video delivers an average 4K video presentation that doesn't offer much of an upgrade over its Blu-ray counterpart, in spite of delivering an otherwise satisfying picture quality. On the plus side, the audio presentation has been repackaged with the same collection of supplements, making the overall package worth checking out only for fans and early adopters.

Sale Price 11.15
List Price 37.99
Buy Now
3rd Party 11.15
In Stock.
See what people are saying about this story or others
See Comments in Forum
Previous Next
Pre-Orders
Tomorrow's latest releases