Katniss Everdeen and Peeta Mellark become targets of the Capitol after their victory in the 74th Hunger Games sparks a rebellion in the Districts of Panem.

That crafty Capitol is at it again. President Snow (Donald Sutherland), with the help of his devious Game Maker Plutarch Heavensbee (Philip Seymour Hoffman), has found a delightful, not to mention convenient wrinkle in the way the Hunger Games are dealt with. Every 25 years, or basically whenever President Snow sees fit, the Hunger Games gather up a bunch of past winners and have them battle it out, yet again. Katniss (Jennifer Lawrence) and Peeta (Josh Hutcherson) aren't out of the woods yet, not by a long shot.

The movie, however, doesn't rush full-throttle into the games. Yes, those sequences are the most exciting and visually stunning, but the action that takes place outside of the Capitol's death dome is just as entertaining.

The relationship between Katniss and Peeta is a tenuous one. One, which on the surface, is adored by fans in every district. Like today's high-powered celebrity couples, Katniss and Peeta are expected to lap up the limelight. They're expected to be in love of every second of every day. It doesn't help matters that secretly Katniss loves Gale (Liam Hemsworth). A development that has drawn the ire of President Snow. Snow needs his loyal subjects to fall in line. Katniss' willful disobedience in the first games has caused a stir of uprising around the districts. He hopes that the spectacle of Katniss and Peeta's celebrity will distract them from the horrors of his reign.

The parallels of ultra-celebrity highlighted in 'Catching Fire' are its strongest asset. A bold comment on how enamored we are with celebrities, and how we can so easily be distracted by their lives. 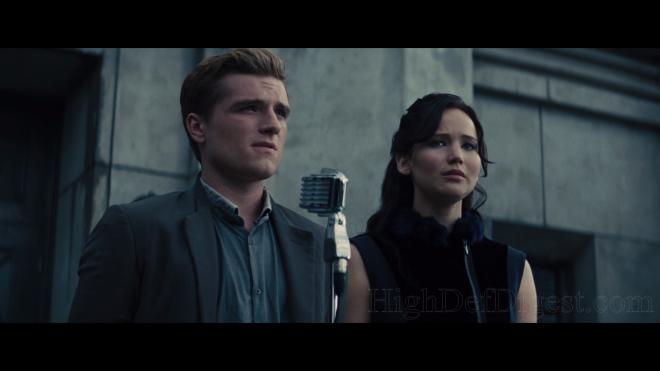 Though 'Catching Fire' suffers from the same problems as the first movie. It lacks a believable scope. Whenever the Capitol is shown it's this expansive CGI as-far-as-the-eye-can-see wonderland of futuristic buildings; no doubt home to millions upon millions of citizens. Then we travel out to the separate districts. All of which are depicted as small towns, whose entire population fits nicely into the town square. The sizes of the surrounding districts, both in area and population, never jive with the grandiosity of the Capitol. How are these districts supporting the Capitol? They're so tiny.

The games are full of all sorts of technical wizardry. Here is where the movie excels as far as the first movie is concerned. The action this time around, while frantic at times, isn't nearly as nauseating as Gary Ross' shaky-cam. It's a wonderful change of pace actually seeing and understanding what's going on as opposed to guessing while we try to keep from getting sick.

Jennifer Lawrence is as great as ever, acting circles around the two boys meant to be her love interests. She's the heart and soul of just about any film she does, and that's true here too. Her portrayal of Katniss is a firm pillar on a shaky foundation of kick-ass heroines. There aren't many as far as Hollywood is concerned (knowledge you may have garnered by the severe lack of female heroes in those blasted hero montages shown during the Oscars telecast).

'Catching Fire' provides the same sort of emotional heft as the first film. It decently builds around its stable of increasingly likable characters. It outshines its predecessor as far as the action is concerned. Thank's for keeping the camera still Francis Lawrence! 'Catching Fire' is a more than worthy successor to the 'Hunger Games' franchise.

Lionsgate Home Entertainment brings 'The Hunger Games: Catching Fire' to 4K Ultra HD Blu-ray as a two-disc combo pack with a flyer for a Digital HD Copy. At the moment, we are unable to verify the correct size of the content, but the triple-layered UHD100 disc sits comfortably opposite a Region A locked, BD50 disc inside a black, eco-elite case with a glossy slipcover. At startup, the disc goes straight to the main menu with full-motion clips and music.

Miss Everdeen does indeed catch fire on Ultra HD Blu-ray thanks to a great-looking HEVC H.265 encode in HDR10, providing fans with an attractive upgrade over the standard Blu-ray. The movie was shot with a combination of Super 35mm stock and IMAX 65mm film for some of the action sequences. The elements were later mastered in a 4K digital intermediate, which may have been used for making this 4K video. Compared to its BD counterpart, there's a noticeable uptick in definition and clarity, showing fine lines that seem more distinct and striking in every scene. The embroidery, fabric and threading in the costuming is more defined, more intricate and more ornate. Individual bricks of the factory buildings in District 12 are better exposed, making the town seem grimier and more decrepit, while the gloomy houses at Victors' Village show the slightest blemish and pockmark from a distance. Natural, sometimes slightly rosy facial complexions show more lifelike textures in the faces, making the tiniest wrinkle and negligible blemish plainly visible.

However, where the 2.40:1 image reveals the most dramatic improvement is the excellent high dynamic range, making for a brighter and tad more dazzling presentation than the Blu-ray. Jo Willems' photography is intentionally subdued to give the story a more gray and somber feel, but overall contrast is spot-on with brilliant whites throughout. This is perfectly balanced against superb brightness levels, displaying inky rich, full-bodied blacks that provide the image with a three-dimensional feel and a lovely cinematic appeal. Strong gradational differences allow for good visibility in the distance. It appears the source may have also been color graded to take advantage of the wider color gamut since the 2160p video displays a fuller and noticeably brighter palette. It doesn't exactly offer a wider array of colors compared to its 1080p foil, but primaries appear more energetic and vibrant while secondary hues in the clothing of Capitol's residents are glowing and true to life.

All in all, this is an excellent 4K presentation fans will surely enjoy.

The girl on fire receives another excellent upgrade in the audio department when she returns to the Games. Unfortunately, unlike the first movie and the standard Blu-ray, this Dolby Atmos soundtrack is not quite as active or consistently immersive. However, the design is sprinkled with several demo-worthy moments that nicely complement the many action-packed visuals.

On the whole, rear activity is often more silent than not, which is not a bad thing since the fronts and heights do a majority of the heavy lifting with the focus on character interaction and dialogue. Surrounds and overheads burst to life on occasion as debris from explosions lands everywhere while hovercrafts fly all around, utilizing the ceiling speakers with excellent directionality and flawless panning. Quieter moments come with a few subtle instances of amusing atmospherics, particularly when inside the arena with birds chirping above or voices echoing. The best moment for sure, which would also serve as an excellent demo clip, is the final quarter of the movie with the lightning hitting the tree and the rescue mission. Random noises of destruction take up the entire soundfield and generate a satisfying dome effect. The score makes the best use of the object-based format, spreading across the overheads for generating a larger soundscape.

Imaging is highly engaging and expansive with lots of background activity, keeping much of the film within the front soundstage. A sharply detailed mid-range exhibits superb clarity and differentiation between the softest and loudest segments while offering a slight improvement in channel separation and movement across the entire screen. Off-screen sounds are convincing while maintaining precise, well-prioritized vocals in the center. Several moments discretely move into the heights, creating a highly engaging half-dome effect. The low-end is strikingly powerful and responsive with several authoritative, wall-rattling moments, giving explosions and action sequences a room-shaking presence.

'Catching Fire' exceeded the prowess of the first film. It certainly is much better in the way of portraying believable, easy-to-follow action. Though, it also produces some pretty decent character building along with some great acting from some of Hollywood's stalwarts.

The Ultra HD Blu-ray arrives with an excellent 4K video presentation offering several noteworthy moments and an appreciable uptick over its Blu-ray counterpart. The movie also includes a top-notch Dolby Atmos audio presentation. Along with the same collection of supplements, the overall package is recommended for early adopters and the most loyal fans.

Sale Price 10.73
List Price 22.99
Buy Now
3rd Party 4.39
In Stock.
See what people are saying about this story or others
See Comments in Forum
Previous Next
Pre-Orders
Tomorrow's latest releases