In a world divided by factions based on virtues, Tris learns she's Divergent and won't fit in. When she discovers a plot to destroy Divergents, Tris and the mysterious Four must find out what makes Divergents dangerous before it's too late.

Overflowing with — mostly nonsensical — ideas about autonomy and free will while imagining itself as a dystopic sci-fi epic about a controlled society, 'Divergent' inundates the audience with possibilities for something better and exciting. The grand, and admittedly imaginative, spectacles of a seemingly peaceful civilization hiding behind a stories-high wall that surrounds a ruined Chicago are unfortunately nothing more than a pretty mask concealing a lack of genuine understanding of the ideas the plot sporadically touches on. Granted, the target audience isn't likely expected to dwell on the thought-provoking notions when a budding teen romance takes center stage, but the potential for something meaningful that young adults can chew on is there, buried beneath quick, easily-digestible Hallmark-like quotes about being true to yourself.

Based on the popular tween trilogy of the same name by Veronica Roth, the film foresees a future devastated by war, and survivors have established a society divided into five factions. In a story where these disparate groups work towards a common goal, it's interesting to think their designations expose the plot's various internal inconsistencies. Abnegation are the selfless caregivers with governmental powers, but, as the movie demonstrates, every character is motivated by selfish desires. Why there's a difference between them and the commune, hippie-like Amity is never explained. The Candors are a forthright people that never lie, yet certain, rather important details in the plot are continuously kept a mystery. Dauntless is the brave security faction with weak members constantly living in fear while the Erudite funnily demonstrate the little intelligence to be found anywhere in this tween actioner.

Plunged into this needlessly overly complicated and discrepant universe is Beatrice Prior (Shailene Woodley), a heroine we're meant to believe is gifted and intelligent to excel in any faction but just dumb enough not to be skeptical or question authority. When kids reach a certain age, they partake in a city-wide aptitude test that determines which group they will belong to, and we follow Beatrice as the rest of her life is decided for her. By the way — and this is where the endless contradictions quickly become a gross distraction — excelling in the exam is a bad thing according the plot because it means you don't belong to any of these childish cliques, called Divergents, which is not the same thing as the destitute Factionless. But that doesn't matter because in the end, every kid is allowed to pick their faction in a meaningless ceremony, regardless of the exam's results. 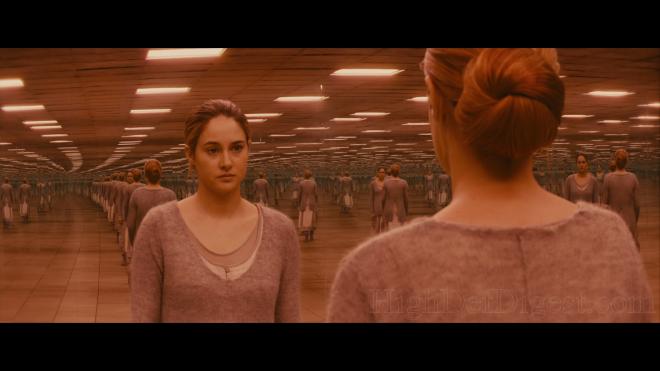 At this point, it is clear director Neil Burger ('The Illusionist') and his team has chunked logic off a speeding train much like the stupid Dauntless soldiers, and we're only fifteen minutes into the movie's 139-minute runtime, which diverges further into irrationality as the story progresses. Never mind that no one ever explains specifically why or how a Divergent is a threat to the system when -- given the structure of it, they would actually be a benefit. What matters is the Erudite leader Jeanine (a boring dull Kate Winslet looking suspiciously like Hillary Clinton) planning a coup d'état so that she can launch her fascist regime. Her reasons are riddled with a variety of fallacies and ultimately born of a trivial understanding of simple concepts. She fashions a violent takeover and attempts genocide in order to establish peace? She wants to eradicate one faction's will to power while at the same time forcefully imposing her own on others?

In a movie that supposedly encourages critical thinking, free will and independent thought, 'Divergent' goes to great lengths at demolishing those very lessons mainly because the actions and motivations of the characters make little sense. It's frustrating figuring out how our heroine is a threat to a supposedly rigid system that offers choice, yet one faction's leader illogically wants to overthrow it for another rigid system that still caters to an individual's choice, in spite of the results of an aptitude exam. All the while, Beatrice discovers a sense of self, finds love in her instructor Four (Theo James) and learns that being Divergent is a good thing but fails to explain it to us. Even if some viewers choose to overlook these glaringly bad aspects, they must still contend with the fact that the plot is a blatant cross of 'The Hunger Games' with the 'Harry Potter' series, evincing the plot is not so divergent after all.

Summit Home Entertainment brings 'Divergent' to 4K Ultra HD Blu-ray as a two-disc combo pack with a flyer for a Digital HD Copy. At the moment, we are unable to verify if the correct size of the content, but the dual-layered UHD disc sits comfortably opposite a Region A locked, BD50 disc inside a black, eco-cutout case with a glossy slipcover. At startup, the disc goes straight to the main menu with full-motion clips and music playing in the background.

Mounting an uprising against the controlled society holding them back from being true to themselves, Tris and her fellow Dauntless groupies soar to Ultra HD Blu-ray just as the other two installments land on the new format. Unfortunately, the results don't offer the massive upgrade expected, yet the minor and arguably negligible improvements shouldn't go unnoticed by the most devoted fans. Considering the stylized cinematography and the source used for this 4K edition, it's perhaps not surprising the HEVC H.265 encode in HDR10 is quite dull and pretty uneventful, looking fairly similar to its Blu-ray counterpart in terms of clarity and resolution. Granted, the overall video shows slightly better definition throughout. We can make out the threading and fabric in the various faction outfits and the textured jackets of the Dauntless to smallest imperfections and tiny pockmarks of the city ruins. It's not a night and day difference and doesn't deliver the visual impact that would convince those sitting on the fence. In a weird way, the movie deviates from the pack to forge its own faction of a world in 4K HD.

Shot entirely on the Arri Alexa series of digital HD cameras with a max resolution of 2.8K, the raw data was later mastered in 2K digital intermediate, and though it's uncertain which of the two was used, I suspect the folks at Lionsgate might have simply upconverted the available DI elements. Also worth noting when assessing the picture quality, the original photographic choices by the filmmakers pose some limitations, affecting the overall look and possibilities of what the format is capable of. Although the transfer is squeaky clean and generally spotless, Alwin H. Küchler's cinematography is noticeably restrained while favoring the ever popular orange-teal palette, giving the picture a welcomed cinematic appeal but still looking pretty lackluster and bland. Contrast wavers somewhat from scene to scene, ranging from spot-on to humdrum, which makes much of the presentation appear flat. On the other hand, whites are intensely brilliant and vibrant, giving highlights around metallic edges a nice glistening sparkle. Sadly, brightness levels are generally murky and grayish, in spite of a few darker moments with deep, accurate shadows. And there is some variance between the various shades of blacks worth admiring.

Presented in a 2.40:1 aspect ratio, colors appear largely affected by the intentional look and feel of the cinematography. And on top of that, it doesn't seem as though the source was color graded to take advantage of the wider color gamut. That's not to suggest that early adopters won't notice the small jump in quality, but the overall palette lacks life and primaries don't really pop as would be expected of the new format, though they're still accurately rendered and remain consistently clean throughout. This is most apparent in the blue of the sky and the green of surrounding foliage, showing little difference between this UHD and its BD counterpart. Actors often appear flushed and sickly, but not entirely disagreeable with faces looking revealing and healthy in several shots. On the other hand, secondary hues are excellent and top-notch, animating those beautiful wide-shot pictures of the sun's rays with a gorgeous sheen and realism. But in the end, the 4K presentation is noticeably limited, making this UHD a passable upgrade with some noteworthy reservations.

For this Ultra HD Blu-ray edition of the movie, the dystopian YA sci-fi actioner is also given a major upgrade in the audio department thanks to an impressive and demo-worthy Dolby Atmos soundtrack that surprisingly bests its DTS-HD MA counterpart.

Like its predecessor, a good deal of the action still takes place in the front soundstage, generating a highly engaging wall of sound and exhibiting sharp detailing in the mid-range. Imaging is terrifically broad and expansive with lots of background activity that displays superb clarity and differentiation between the softest and loudest segments without the slightest hint of distortion. The most noteworthy improvement is outstanding channel separation and movement across the entire screen with marvelous off-screen sounds while maintaining precise, well-prioritized vocals in the center. Both action sequences and quieter dialogue-driven moments come with effects that discretely move into the heights, creating a highly engaging half-dome effect. And the music of Junkie XL also takes advantage of the extra leg room, nicely bleeding into the heights and sides. The low-end is strikingly powerful and responsive with a couple authoritative, wall-rattling moments while also providing substantial weight to the many electro-style songs.

Whereas before, rear activity often felt noticeably silent and lackluster, the surrounds and overheads on this object-based codec are often employed with subtle atmospherics, like the wind blowing high above in the trees and through the empty building or the voices of other Dauntless soldiers echoing and resonating all around. Some the best moments that could easily serve as an excellent demo clips are every time Tris does the psychological simulation tests and when Tris and Four climb the large ferris wheel as the sound of metal expanding and contracting spreads all around and into the ceiling channels. During the last quarter of the movie, the war between factions erupts the room with the random noises of debris and gunshots whizzing everywhere, occupying the entire soundfield and generating a satisfying dome-like effect. Theses same action sequences reveal superb directionality and flawless panning, enveloping the listener and putting them right in the middle of the action.

All in all, this object-based lossless mix is far more satisfying and immersive than the Blu-ray.

Overflowing with — mostly nonsensical — ideas about autonomy and free will while imagining itself as a dystopic sci-fi epic about a controlled society, 'Divergent' inundates the audience with promises of something better and exciting which it can't deliver. A wasted Shailene Woodley, an underused Ashley Judd and a boring Kate Winslet star in an unoriginal and ultimately dull film swimming in an illogical plot and riddled with more questions than answers.

This Ultra HD Blu-ray arrives with a strong 4K video presentation, though the heavily stylized photography keeps the video from truly shining. On the plus side, the movie arrives with a terrifically satisfying and demo-worthy Dolby Atmos audio presentation, joined by the same collection of supplements featured in its Blu-ray counterpart. Overall, the package is worth checking for early adopters who are already fans of the movie and simply want to expand their growing UHD library.

Sale Price 14.96
List Price 22.99
Buy Now
3rd Party 7.99
In Stock.
See what people are saying about this story or others
See Comments in Forum
Previous Next
Pre-Orders
Tomorrow's latest releases