The peaceful realm of Azeroth stands on the brink of war as its civilization faces a fearsome race of invaders: orc warriors fleeing their dying home to colonize another. As a portal opens to connect the two worlds, one army faces destruction and the other faces extinction. From opposing sides, an unlikely set of heroes are set on a collision course that will decide the fate of their families, their people and their home. So begins a spectacular saga of power and sacrifice in which war has many faces, and everyone fights for something.

Like the brawny orcs of 'Warcraft' adamantly advocating for others observing ancient traditions, this big-budgeted adaptation of the massively popular PC game also adheres to real-world traditions. The action-fantasy box-office flop goes down as yet another example of video games not making good movies. Though, many are placing their bets on 'Assassin's Creed' starring dramatic heavyweights Michael Fassbender and Marion Cotillard as possibly changing all that later this Christmas. However, much like this drab, yawn-inducing production, that action-adventure time-bender might be a visual feast for the eyes, but there's no guaranteeing the core story that attracted players in the first place will translate perfectly to the language of cinema.

'Warcraft,' on the other hand, bursts onto the screen with fantastically detailed battle sequences that should ignite exhilarating applause. It has all the makings of a satisfying summer blockbuster with the bombastic, percussion-heavy score by Ramin Djawadi leading the charge. But it ultimately lacks genuine emotion and a sense of urgency on either side of the battle between humans and orcs.

This is a real shame because the computer-generated visuals are truly remarkable, serving as evidence of how far movie-magic has come in the last twenty years. The lush human world of Azeroth is brimming with wildlife, bright green vegetation and distinct leaves, all thanks to the stunning wide-shot photography of Simon Duggan ('Live Free or Die Hard,' 'The Great Gatsby') and the long list of talented people behind the visual effects. The filmmakers were clearly aiming for something in the tradition of classic sword-and-sandal epics.

When the altruistic orc chieftain Durotan (voiced by Toby Kebbell) sees his pregnant wife give birth to their son, there is a visible softness to his demeanor and a sincere show of worry in his eyes at the thought the newborn might be dead. Despite being just as detailed and near photo-realistic, other characters come off much too cartoonish, which might have more to do with their being two-dimensional archetypes. The powerful warlock Gul'dan (Daniel Wu) is standard desire-driven evildoer while his henchman Blackhand (Clancy Brown) will predictably see the error of his ways. However, Durotan is quite expressive in his concern over the senseless killing of innocents and manages to reveal a trustworthy face when attempting to strike peace with the humans. 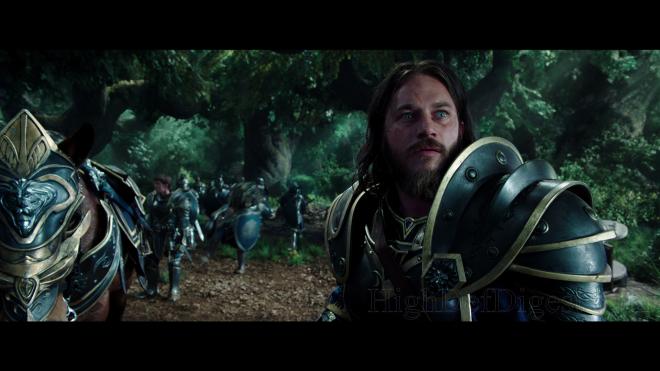 On the other hand, the excessive reliance on CGI is also evidence of an unfortunate aftermath. The filmmakers forgot to inject the plot with real people. Granted, there are plenty of real actors stealing valuable screen time from the far prettier pictures — including the orcs! — but there's nothing in Charles Leavitt's script that engages audiences enough to feel the gravity of humans struggling against the odds.

Instead, we're made to suffer the company of stock characters functioning as generic plot devices. Dominic Cooper as King Llane Wrynn just scowls at those wiser than him and when surveying the landscape, which in reality, he's staring at either empty space or a green screen. And it shows in his face. As the naturally gifted mage Khadgar, Ben Schnetzer is the typical apprentice who will eventually prove his worth right at the moment the plot demands him to. Meanwhile, a stiff and dry Ben Foster is a bargain-bin Merlin who gives away the supposed twist halfway into the movie. Travis Fimmel, channeling the dramatic chops of Christopher Lambert as the knight in shining armor, is meant as the central hero simply because he's a single father. But his relationship with his son is so thinly veiled that a key moment between them feels tedious and insultingly heavy-handed.

The only character in 'Warcraft' with anything genuine to offer is a headstrong half-orc slave played by Paula Patton, who expresses a great deal more in one look than in any line uttered by her fellow cast members. It's a sad day indeed when fantasy characters, even those generated by a bunch of 1s and 0s, show more emotion than their real-life human counterparts.

Partial blame must also be pointed at the movie's director, Duncan Jones, son of the late rock legend David Bowie. In his two previous efforts, he demonstrated a talent and craftsmanship for intelligent sci-fi thrillers, but here, he fails to even get this story off the ground or build towards an exciting conclusion with any kind of momentum. The skill for devising large-scale battle sequences is evident throughout, but the spectacular action on display is ultimately a stale, shallow spectacle because viewers have little reason to care. Jones and his team placed more effort on sly, wink-wink references to please the fans — aerial shots of battles in the villages look as though directly pulled from the PC game — than on anything else, forcing those unfamiliar with this multiplayer universe to sit on the sidelines bored out of their gorged without anyone to root for.

Universal Studios Home Entertainment brings 'Warcraft' to 4K Ultra HD Blu-ray as a two-disc combo pack with a flyer for a Digital HD Copy. At the moment, we are unable to verify if the correct size of the content, but the triple-layered UHD100 disc sits comfortably opposite a Region Free, BD50 disc inside a black keepcase with a glossy slipcover. The flyer inside also includes codes for downloading related 'Warcraft' games. At startup, the disc goes straight to an interactive menu screen with full-motion clips and music.

The fantasy action-adventure epic declares war on Ultra HD Blu-ray with a fantastic-looking, often stunning HEVC H.265 encode in HDR10, delivering a noticeable improvement and upgrade over the standard BD.

In terms of resolution, the video comes with a perceptible uptick in clarity. The leaves of trees look a bit more distinct, and the stone buildings and leathered tents of orcs slightly more detailed. But more apparent are faces revealing pores, tiny wrinkles and negligible blemishes in the humans as well as in the animated orcs. Not only do all the characters come with amazing lifelike textures with sopping with beads of sweat, but individual hairs and the threading in clothing is extraordinarily sharper than its 1080p counterpart. Best of all, the minor banding noted in the Blu-ray is gone completely here, which is great advantage.

Shot entirely on the Arri Alexa XT Plus camera system, the UHD's superiority is most evident in the wide array of colors present throughout. Granted, the photography favors an earth-tone palette with a bit more emphasis on browns, yellows and other secondary hues, but primaries are nonetheless consistently lush and saturating. The green in the fel magic is more vibrant, the red in the human blood and the orc war paint is richer, and even more surprising are the subtle hints of magenta in the steely blue Arcane magic. In fact, some might even note distinct differences in the various shades of blue.

The 2160p presentation definitely has the upper hand in the higher dynamic range, as specular highlights provide the metal armor, swords and the various weapons wielded by the horde with a more genuine glimmer and shine. The best moments worth noting are the vivid blue skies with glowing, puffy clouds giving the 2.40:1 image a striking photo-realistic appearance, such as the first aerial shot of Stormwind. Compared to the Blu-ray where the clouds tend to look a tad overblown and lack detailing, the clouds here are absolutely marvelous, showing clear differences in the whites and allow remarkable visibility of the most minute feature and facet in the distance.

The only drawback keeping this 4K video from earning higher marks are the brightness levels. Don't get me wrong, blacks are accurate and full-bodied, but they don't appear any darker than what's seen on the Blu-ray. And we don't really see much distinction between the various shades and shadows, making for a few somewhat two-dimensional moments. Aside from that, this is a fantastic UHD transfer and the preferred way of watching 'Warcraft.'

The planet-jumping orcs wail their war clans together with an equally outstanding, near-reference Dolby Atmos soundtrack that's sure to energize fans and shake the house down.

From the opening moments, as Ramin Djawadi's score slowly swells into all the speakers, viewers will be immersed with the sounds of battle cries, the roar of a fire inside a tent and a horde of grunting conversations all around. The wildlife of Azeroth is occasionally employed with notable directionality while other ambient effects serve to generate an awesome, enveloping experience. For those unequipped for the new codec, the Dolby TrueHD 7.1 version comes with several demo-worthy moments, most notably during the massive battle in the last half hour of the movie.

But those ready for the object-based audio format might feel a tad disappointed with the amount of activity in the ceiling speakers. Don't get me wrong, there's plenty to enjoy, subtle noises and voices that travel above the listening area for a satisfying dome-like soundfield. The best moments are in the first half, such as when Draka is about to give birth and her cries flawlessly move from the front heights to directly above the viewer, or when Anduin first walks up the stairs in Karazhan to meet Medivh and Arcane magic can be clearly heard swirling overhead. The issue is with the lack of similar activity during battle sequences. A various noises and the cries of defeated characters are present, but they are far and few in between to feel immersive, leaving the final fight between humans and orcs a tad wanting for an Atmos track.

However, the design manages to please nonetheless with an expansive and broad soundstage that provides the visuals with a great sense of space and presence. With splendid channel separation and balance, imaging is terrifically engaging with the majority of the activity fluidly moving from one side of the screen to the other and into the top front heights for a satisfying half-dome effect. While vocals are precise and distinct even during the loudest segments, the lossless mix displays rich, detailed clarity between the highs and mids, and a palpable low-end delivers a might, wall-rattling punch when called upon with a couple ultra-low blows for good measure (bass chart).

With incredible, stunning detail and fantastical battle sequences that should energize viewers, 'Warcraft' erupts on the silver screen with a massive thud and the emotional excitement of a snail's race. Hitting cinemas a decade too late, the adaptation directed by Duncan Jones was a box office bomb and lacked any sense of adventure to make it memorable, let alone worth watching.

On the plus side, this Ultra HD Blu-ray arrives with an excellent 4K video presentation. Though it doesn't really compare with other UHD titles currently available, it nonetheless offers several noteworthy moments and an appreciable uptick over its Blu-ray counterpart. The movie also arrives with the same top-notch Dolby Atmos audio presentation. Along with the same collection of supplements, the overall package is worth checking out for early adopters and the most loyal, forgiven fans.

Sale Price 14.17
List Price 22.98
Buy Now
3rd Party 11
In Stock.
See what people are saying about this story or others
See Comments in Forum
Previous Next
Pre-Orders
Tomorrow's latest releases