Supernatural superstars Peter Venkman (Murray), Dr. Raymond Stanz (Aykroyd) and Dr. Egon Spengler (Ramis) spring back into action when the infant son of Dana Barrett (Weaver) becomes the target of a powerful demonic force. Reunited with their industrious secretary Janine (Potts) and the nerdy, near-sighted Louis (Moranis), the ‘heroes of the hereafter’ must put a stop to an enormous underground river ready to rot the roots of the entire Big Apple.

"And you don't want us exposing ourselves!"

The boys in grey, as the late radio personality Casey Kasem once referred to them as, are back with another wacky adventure of paranormal activities in 'Ghostbusters II.' Except in this follow-up to the beloved comedy classic, they also don some new threads along with their now-very-familiar uniforms — mostly all in black with the "no-ghosts" emblem prominently flaunting two fingers like a peace sign. Even Ecto-1 receives a couple minor, exterior upgrades and looks a bit flasher, particularly the electronic marquee sitting on the roof signaling their comeback. The filmmakers raise the stakes somewhat with supernatural hijinks so colossal and widespread that the Ghostbusters team brings in a surprisingly funny temporary fifth member in Rick Moranis' bumbling screwball Louis. His ungainly presence, along with his steamy affair with Annie Potts's Janine, makes for a nice addition, despite mostly serving as the plot's blundering comedy relief.

Unfortunately, anything new or original in this mostly entertaining but frankly generic and unexpectedly average sequel pretty much ends there. The same level of lighthearted energy and wisecracking cynicism introduced in the first film remains, but there is also something weirdly mechanical and routine. Ivan Reitman, Harold Ramis and Dan Aykroyd return to their massively successful hit a bit reluctantly, as the behind-the-scenes legend goes, and it tends to show often throughout its 108-minute runtime. Picking up five years later, Ramis and Aykroyd's script essentially follows the same blueprint as the original, repurposing many of the same plot beats, down to the heated and unlikely relationship of Bill Murray's practically iconic Peter Venkman and Sigourney Weaver's intelligent but also frazzled damsel Dana Barrett. 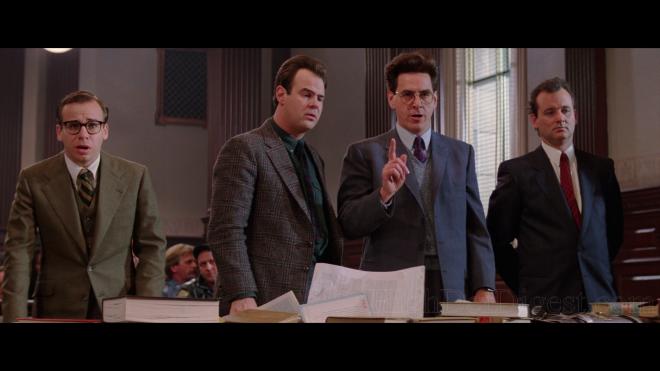 With that in mind, the team is unsurprisingly called into action when Dana experiences close encounters with the beyond in an opening sequence that is admittedly well-done and edited to suspenseful effect. This is followed by a few expository scenes that blatantly though still amusingly update audiences on our heroes' whereabouts and activities since last we saw them save the Big Apple from a giant walking marshmallow. True to Dana's assumptions of him, Peter has actually become a TV personality for a quack show on psychic phenomenon, and Egon (Ramis) has gone back to scientific research while Ray (Aykroyd) and Winston (Ernie Hudson) perform birthday parties where the kids much prefer He-Man. Aside from Ramis' always content bookworm, the guys once again hit a humiliating low-point in their career until another powerful being with a smoke-and-light magic show threatens the city they love.

This is where Reitman's sequel wavers constantly between hit and miss because it's never quite clear how or why Vigo the Carpathian (Wilhelm von Homburg) is a supremely powerful being. So much so that the spirit-trapped-inside-the-painting (?) can do what the ancient god Gozer failed to accomplish: subdue and overpower three bumbling scientists with "unlicensed nuclear accelerators." And the only way to actually defeat this monster is by bringing New Yorkers together and play nice for what seems like maybe a half hour? An hour, at most? Ultimately, it's all nonsense, but the conclusion is satisfying enough and earned. Of course, this is largely thanks to the endless wisecracks, mostly coming from the awesome Murray, all-around great performances from the cast, including Peter MacNicol's Renfield-like Dr. Janosz Poha, and the still-amazing special effects, 'Ghostbusters II' delivers a fun and amusing follow-up.

Sony Pictures Home Entertainment brings 'Ghostbusters II' to 4K Ultra HD Blu-ray as a two-disc combo pack with a flyer for a Digital HD Copy. At the moment, we are unable to verify the size of the content, or if the disc is dual-layered or tripled-layered. The new UHD disc sits comfortably opposite a Region Free, BD50 disc inside a black, eco-cutout case. At startup, the disc goes straight to an interactive main menu that changes screens when switching between the usual options while music plays in the background.

Just as with its predecessor, the boys in grey return to battle an unusual amount of paranormal activity in Ultra HD Blu-ray with a great looking HEVC H.265 encode in HDR10. Created from a recent 4K digital intermediate that was itself made from the original 35mm camera negatives, the 2160p transfer definitely boasts several near demo-worthy moments and demonstrates a clear upgrade over all previous home video editions. This is, without hesitation, the very best the 27-year-old sequel has ever looked and probably ever will, making it the clear-cut winner for the best way of enjoying the film. However, the presentation does come with its share of less satisfying sequences, much of it obviously related to the condition of the source and the photographic style of the period, and in terms of embracing the new format, the results don't quite match some of the best already available.

Nevertheless, on its own and compared to the first movie, the video is much cleaner and sleeker with more depth and dimensionality while still retaining an ultra-fine layer of natural grain throughout, giving the 2.40:1 aspect ratio a welcomed film-like quality. Definition and clarity is slightly better improved, showing razor-sharp details in the weathered buildings and the fall/winter clothing of the cast are often razor-sharp. The tiniest pits and cracks in the concrete sidewalks and gravel streets are distinct while the lettering of signs and the side of cars are much better resolved and legible. Often, lifelike textures in the faces of the cast are highly revealing, exposing individual pores and negligible blemishes. Note how viewers can practically count the number of pockmarks and scars in the face of Bill Murray, the freckles and sunspots on the forehead of Sigourney Weaver, and they can see tiny moles around the necks of other actors. Of course, these sequences are then countered by a fair amount of poorly-resolved moments where everything looks a tad softer and blurrier, and they are all the more apparent because of the better, more improved scenes.

By far, the video's strongest aspect is the slight uptick in contrast and brightness levels, giving the sequel a fresh and reinvigorated feel. But again, the jump isn't quite the night-and-day difference we expect of the new format. Whites are true-to-life and often glowing with energy, making the sunlight shimmer and gleam off the metallic, chrome edges of cars with impressive realism. Clouds are distinctly detailed and unique while radiating against a bright blue sky. Deep, accurate blacks in the clothing and the equipment are dramatically different from the surrounding shadows and the darkest portions of the frame, which never ruin the gradational details in the background. The movie also appears to have been color graded to take advantage of the wider color gamut, boasting brighter, richly saturated primaries that boldly complement the story's lighthearted charm while secondary hues provide an attractive, healthy glow. Look no further than the courtroom scene with the Scoleri Brothers, as their electric-charged spookiness fill the room with intensely brilliant blues, or pretty much any scene with the richly glowing magentas and purples of the evil slime, making this 4K presentation a welcomed step up over its Blu-ray counterpart.

If there's one area where fans and early adopters alike will spot a significant improvement, it will be with this very excellent Dolby Atmos soundtrack, which defaults to a Dolby TrueHD 7.1 track for those not equipped for the new codec. Whereas the first movie didn't really display a night-and-day difference compared to the Blu-ray, this one marks a noteworthy jump over its DTS-HD MA counterpart. And like its predecessor, the sequel enjoys a great deal more breathing room, creating a wider and more spacious imaging. A well balanced soundstage is littered with a variety paranormal activities, exhibiting a rich, detailed mid-range with convincing acoustics and off-screen effects. Randy Edelman's score comes with a wealth of clarity and warmth in the orchestration, often extending in the front height channels with ease and generating a very pleasing wall of sound. The low-end is impressively robust for a film of this age, providing some great rumbling effects to the action and music, while dialogue remains crystal-clear and pristine in the center.

As would be expected for a design of this vintage, this is a front-heavy lossless mix, only occasionally using the surrounds during certain moments of the movie. And once again, much of that use is for expanding the music to subtly envelope the listener. However, in reserving those atmospheric cues for specific scenes, engineers breath new life into a 27-year-old movie without bringing too attention to itself or making those effects easily localized. One such action sequence is when Egon, Ray, and Winston search for the pneumatic transit line and the underground river of slime. As a phantom train is heard barreling towards a petrified Winston, metallic noises jingle, rattle and clatter into the sides, rears and ceiling speakers, creating an awesomely satisfying sense of immersion. Another moment taking advantage of the object-based format is Vigo's thick, guttural voice echoing all around and overhead, making the character seem all the more threatening and powerful.

Twenty-seven years later, 'Ghostbusters II' remains an amusing and fairly entertaining follow-up to the beloved sci-fi comedy classic. It may not be quite as funny as its predecessor, but the movie still delivers some laughs and amazing special effects. This Ultra HD Blu-ray arrives with a strong 4K video presentation though the picture quality isn't a massive jump from its Blu-ray counterpart. But like its predecessor, the video arrives with several noteworthy and decent demo-worthy improvements. On the flip side, the biggest upgrade comes by way of a top-notch, satisfying Dolby Atmos audio presentation and the same collection of supplements as before are ported over. All things considered, the overall package might be worth a look for early adopters enthusiastic about the new format.

Sale Price 21.99
List Price 30.99
Buy Now
3rd Party 11.34
In Stock.
See what people are saying about this story or others
See Comments in Forum
Previous Next
Pre-Orders
Tomorrow's latest releases