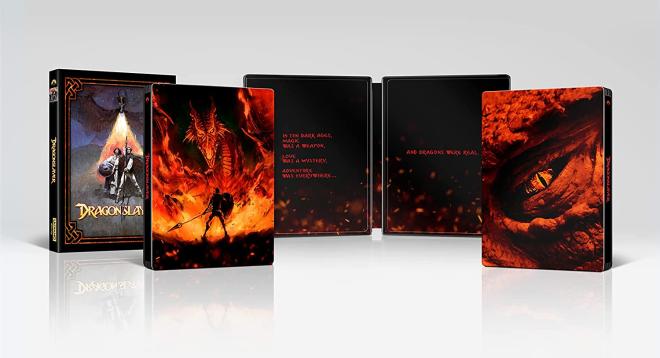 FOR THE FIRST TIME EVER ON 4K UHD, REMASTERED WITH DOLBY ATMOS SOUND, AND FEATURING HOURS OF SPECIAL FEATURES INCLUDING NEW COMMENTARY BY DIRECTOR MATTHEW ROBBINS WITH GUILLERMO DEL TORO

An essential fantasy-adventure, with groundbreaking Oscar-nominated visual effects, DRAGONSLAYER comes to 4K Ultra HD with HDR-10 and Dolby Vision—restored for exceptional picture and sound approved by director Matthew Robbins. Set in sixth-century England, an ill-tempered, fire-breathing creature—ominously known as Vermithrax Pejorative—terrorizes its citizens until a young sorcerer’s apprentice named Galen is reluctantly tasked with confronting the beast. For Galen to succeed, it will take more than magic to defeat the dragon.