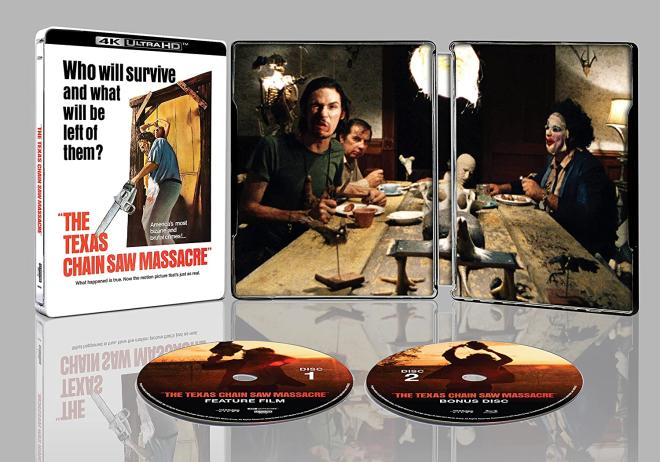 It has been called "grisly," "sick," and "perverse,", as well as "raw," "unshakeable," and "the movie that redefined horror." It was attacked by churches, banned by governments, and acclaimed by only the bravest of critics. It stunned audiences worldwide and set a new standard in movie terror forever. Today writer-producer-director Tobe Hooper's dark, visionary tale remains unparalleled in its impact as perhaps the most frightening motion picture ever made.

Now, for the first time, Dark Sky Films proudly presents its director-approved 4K restoration of THE TEXAS CHAIN SAW MASSACRE on 4K Blu-ray, bringing all the scares and the screams into terrifying focus and clarity, making for an immersive viewing experience audiences won't forget. For both new viewers and long-term devotees, this is THE TEXAS CHAIN SAW MASSACRE as it has never been seen or heard before.

The film follows a group of young friends (played by Marilyn Burns, Allen Danziger, Paul A. Partain, William Vail and Teri McMinn) road-tripping by van through Texas who fall victim to a bizarre family of cannibals – including a huge masked madman known as Leatherface (Gunnar Hansen) who always has a gas-powered chain saw at the ready. The shocker originated many elements of the slasher genre that would soon explode: the use of power tools as murder weapons, a hulking faceless killer, a desolate rural setting, and the sadistic slaughter of innocent young victims.

Upon its initial release in 1974, THE TEXAS CHAIN SAW MASSACRE was banned in several countries, and many theaters in the U.S. stopped showing it due to complaints about its violence. But the low-budget film was hugely successful, grossing more than $30 million domestically, and is now regarded as one of the best and most influential horror movies. It led to a franchise that continued the story of Leatherface and his family through sequels, prequels, a remake, comic books and video games.

DISC TWO, a Blu-ray, contains the new, never-before-seen feature-length documentary The Legacy of The Texas Chain Saw Massacre and several featurettes. These include "The Cinefamily Presents FRIEDKIN/HOOPER," a conversation about the film between Tobe Hooper and The Exorcist director William Friedkin; "The Texas Chainsaw Massacre: The Shocking Truth"; "Flesh Wounds: Seven Stories of the Saw"; a tour of the TCSM house with Gunnar Hansen; "Off the Hook with Teri McMinn"; and "The Business of Chain Saw: An Interview with Production Manager Ron Bozman."Filling out the generous package are deleted scenes and outtakes, a blooper reel, trailers, vintage TV and radio spots, and much more to thrill fans old and new.