The cannibalistic cravings of the maniacal Sawyer family continue in the gassed up over-the-top 1986 Cannon Group sequel The Texas Chainsaw Massacre Part 2. One of the weirdest and wildest horror films of the 80s, Tobe Hooper takes his gritty independent shocker and turns it into an intensely hilarious black comedy parade of gore and viscera. After several outings on Blu-ray, this fan-favorite cuts its way to Vinegar Syndrome for its first 4K Ultra HD Blu-ray release sporting one hell of an impressive native 4K HDR10 transfer, clean audio, and an entire chili competition’s worth of meaty new and archival bonus features to devour. Highly Recommended.

For years, former Texas Ranger Lieutenant “Lefty” Enright (Dennis Hopper) has hunted all across Texas for the madmen who killed his nephew Franklin and drove his niece Sally insane. Everyone in law enforcement believes he’s a cracked-up cop, but he knows the truth and when a pair of partying high schoolers end up as buzzed-up road kill while calling into a radio show, he knows he’s getting close. Convincing rock radio DJ Stretch (Caroline Williams) to play the tape of the boy’s demise on the radio, he hopes to drive the killers out into the open, but he only unleashes another chainsaw-fuelled nightmare of mayhem when Chop-Top (Bill Moseley) and Leatherface (Bill Johnson and Tom Morga) come calling into the radio station - in person.

Since we’ve covered three other Blu-ray releases of The Texas Chainsaw Massacre Part 2 on Blu-ray already, I’ll ultimately be letting my colleague M. Enious Duarte have the final word on the quality of the film. For my own part, I too dearly love and enjoy this film. Of the sequels, remakes, reboots, retcons, requels, and several prequels it’s easily the best of the franchise. The original The Texas Chain Saw Massacre is and will always remain one of the most visceral and shocking horror films of its era and a neigh impossible benchmark to topple for any future Chainsaw film.

While it took me a number of viewings to warm up to this sequel, it’s still a hell of a fun and darkly hilarious film. The first film too had its share of dark giggles but it was far less overt. Tobe Hooper was under the Yorum/Globus Cannon gun to deliver a sequel starting in on this mere weeks after finishing Invaders From Mars and he was smart enough not to try to redo his original masterpiece and instead go in a completely different direction. Among those changes was the presentation of gore. The first film hid the gore making it all the more shocking because you had to imagine the horror. This time around with the help of monster gore effects maestro Tom Savini, every flood of blood or sliver of liver is on screen for you to digest. 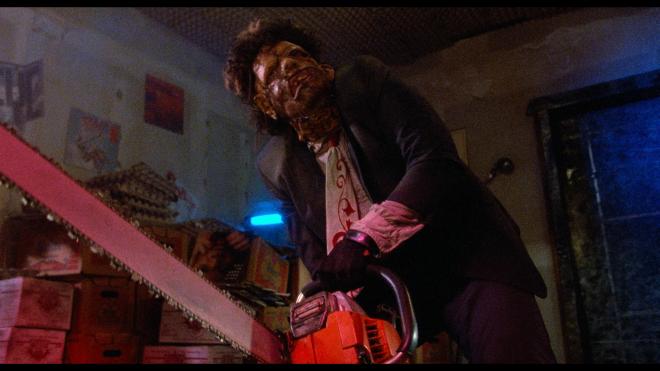 I’ve seen this movie many many times, but this outing I found the sight of Leatherface using a teeny tiny turkey carver on a body to slice up a snack to be one of the funniest images in the film. Dennis Hopper may have declared it one of the worst films he was ever in (he had a long list of those actually), but I find it delightfully effective and creepy and he's very good in it. It was also one of the few movies of the 80s to be ballsy enough to be released Unrated after initially getting an X-rating rather than making numerous cuts to secure an R for a more commercial break in theaters. The film was already heavily cut to meat the runtime nixing several important plot threads. I’d love to see a fully restored version someday, but to that end, I appreciate a film like this that sticks to its saws rather than give in to the pressure of a nutty rating board. 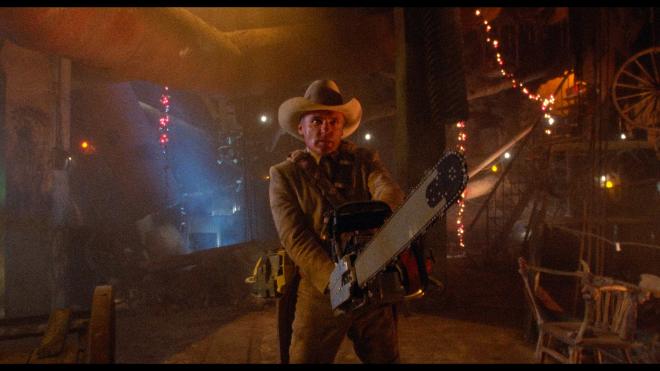 Vital Disc Stats: The 4k Ultra HD Blu-ray
The saw is now 4K family thanks to a new three-disc 4K Ultra HD Blu-ray set from Vinegar Syndrome. In this release we see the 4K version score a BD-66 disc, the 1080p picks up a Region A BD-50, with a second BD-50 disc dedicated to archival bonus features. All three discs are housed in a sturdy black three-disc case with their own trays and are not stacked, the case also features newly commissioned artwork, reversible insert art depicting the classic “Breakfast Club” poster, a slipcover with the “Breakfast Club” art, and then the whole shebang has a hard stop slipcase with the newly commissioned art designed by Tony Stella. All three discs load to standard animated (or slightly so) main menus with traditional navigation options along the bottom of the screen. 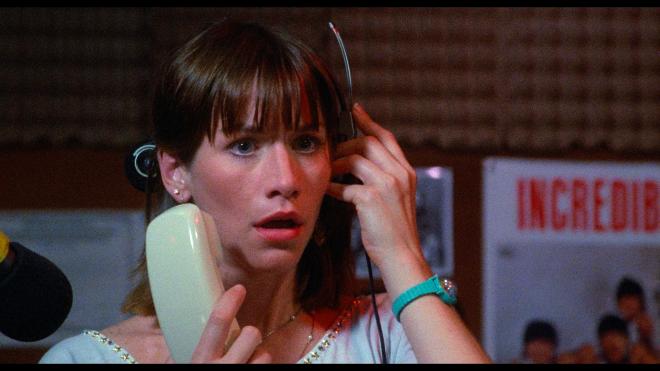 Reportedly sourced from a new restoration of the original 35mm camera negative, The Texas Chainsaw Massacre Part 2 cuts up 4K Ultra HD Blu-ray with an impressive 2160p HDR10 transfer. I don’t personally have the 2013 Arrow Disc E. mentioned in his review of the Turbine Blu-ray, I only have the 2012 and 2015 discs at my disposal and I have to say that the improvements are immediately obvious. From the first pull, details are crisp and clear allowing full appreciation of those knucklehead kids and Leatherface’s terrifying attack on the bridge. Then of course you have the ample gore effects from Tom Savini which are showcased in all their glory. Film grain is a bit on the thicker side of the spectrum, but then this film has always kind of had a gritty appearance and this release is nicely cinematic in that regard. 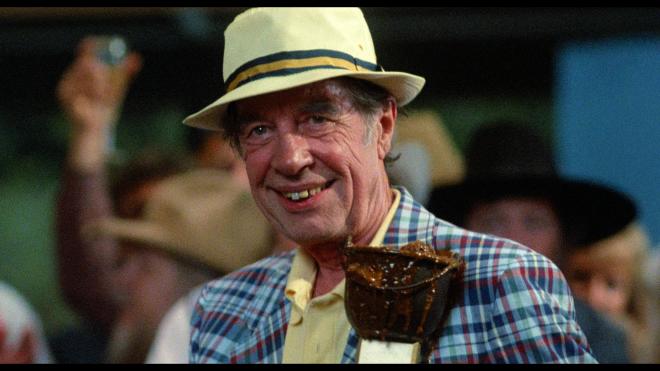 HDR10 does a nice job working to keep black levels even-keeled compared to past releases while allowing primaries to come to life keeping skin and flesh tones nice and healthy. Black levels have always been tricky for each release of this film. I’ll say this one certainly does a great job allowing you to see what’s in those dark corners of the Sawyer complex or fine details during that bridge attack without over-brightening. There are a couple of areas that still get awful close to crush, but again better than we’ve seen in the past so that leaves me thinking those bits are just naturally problematic, to begin with. Primaries are nice and strong throughout without being blasted or “popped” too harshly - although blues look very blue now and that was pretty striking when I first popped in this disc. But again skin tones are warm and healthy without ever looking overly pink as was the case in the 2012 disc. 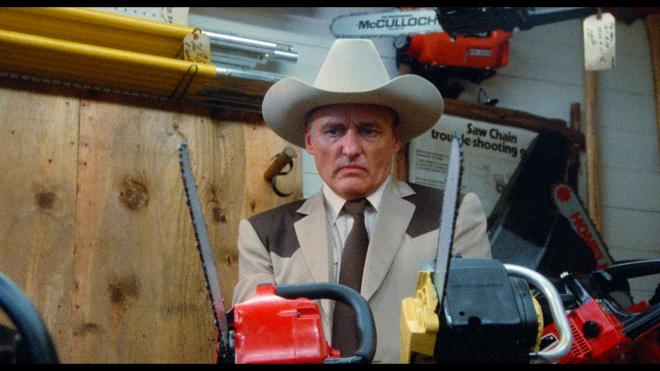 The carnage and mayhem of the Sawyer complex looks far and away better than I’ve ever seen it. This is kind of important since the last half of the film is at this one location and some of Tom Savini’s best gore effects are on display in these scenes and the production design is off the charts. Another greatly improved sequence I thought was when Lefty goes chainsaw shopping and he comes into the store just as they’re opening and the owner doesn’t have all the lights on, those shadows and deep inky spots look great allowing you a little tease of the gas-powered ordinance lurking in the darkness before we get to see each brightly colored saw. 4K or Blu-ray; unless some other label comes in and does its own work, I can’t imagine things getting much better than this release. 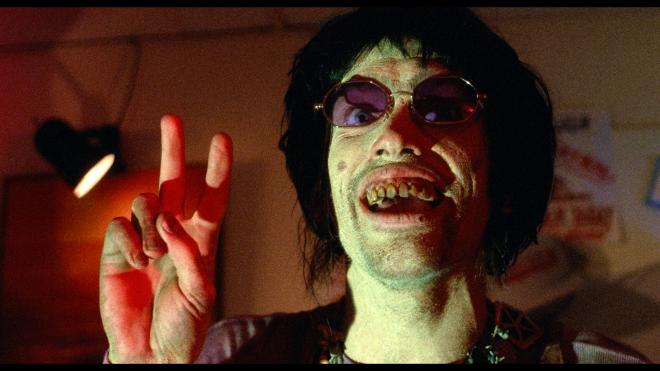 [Quick Note] - Thanks to Robert H. for writing in, it sounds like certain setup combinations may be having an issue with the HDR grading, some skin tones can appear VERY red. I did not see this with my LG/Oppo 203 setup, and when I sourced images from the disc and put the clip on YouTube it wasn't a problem there either. Robert mentioned he was rolling an LG/Sony setup. Checking my Samsung QLED/Samsung office setup (which is nowhere near reference and always had dodgy colors even in HD so I don't often refer back to it), it too had VERY red skin tones that would come and go from one scene to the next. I still stand by my overall video score because on my main rig it looked genuinely excellent, but if you have an issue please comment in and let us know so we can report it further up the food chain to those who need to know. 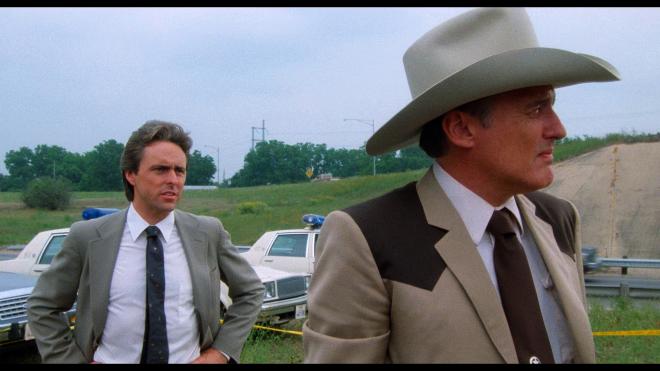 Past releases of The Texas Chainsaw Massacre Part 2 offered up a 5.1 track and a 2.0 mix, but this time out Vinegar Syndrome is keeping things true to the theatrical experience with a lovely DTS-HD MA 2.0 track. Flipping between this disc and my old Scream Factory set, I didn’t hear much if any difference between the two DTS 2.0 tracks. Which is fine because it’s very, very good. While I would have liked to hear the 5.1 track come back, this is by no means a deal breaker. The 5.1 one track was still very much a front/center focussed effort so this stereo track feels true and fitting for this release. Dialog is clean and clear without issues - even when the loudest chainsaws are roaring away. The delightfully loony score sounds terrific, and there are enough ambient and active sound effects to deliver a sense of atmosphere and dimension throughout. I didn’t fire up my DTS Neural:X function because I just didn’t feel it was needed. 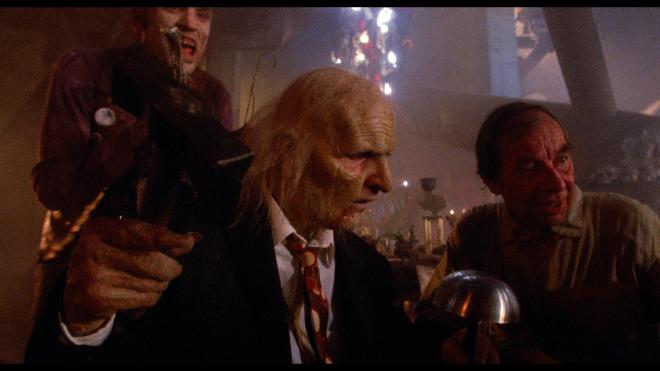 Well, I hope you’re hungry because you've got a feast of content ahead of you. Seriously, this is stuffed with amazing bonus materials making it the foie gras of physical media releases. Not only has Vinegar Syndrome gone and brought back every previous bonus feature from past discs, but they’ve cooked up their own set of new extras! First on the plate, you can dig into a brand new audio commentary with Patrick Bromley that’s a pretty fun and informative listen after you’ve dug into the previous three commentary tracks. Then if you’re after a second helping of extras, you can cut into nearly two-and-a-half hours of brand-new cast and crew interviews - all of them worthwhile sitdowns with the respective personalities involved. Then you can knock yourself out with roughly another almost six hours of previously released extras for dessert! It’s been ages since I’ve seen a release this extensively fully loaded with bonus features. Adding the runtimes to listen to each commentary, you have well over ten hours of excellent bonus content to enjoy on top of the great flick! 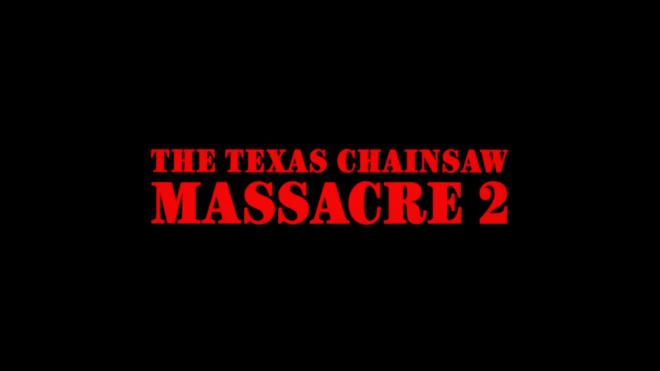 The Texas Chainsaw Massacre Part 2 may have been largely dismissed by critics and fans of the original film, but over the last 35 years, this film has been steadily reassessed and reappraised. After numerous DVDs, Blu-rays, and revival screenings, this gnarly sequel has grown into a genuine cult classic that could only come from the wild minds of Tobe Hooper and the Cannon Group.

After several showings on Blu-ray in multiple territories around the world The Texas Chainsaw Massacre Part 2 cuts a path onto 4K Ultra HD Blu-ray. This three-disc set from Vinegar Syndrome may well be the most definitive release to date offering an excellent HDR10 transfer, terrific audio, and a treasure trove of incredible new and archival bonus features giving you several hours of audio commentaries, new interviews, and featurettes to digest. Highly Recommended