The two titans of horror, Laurie Strode and Michael Myers climb into the ring one last time for the showdown of a lifetime… with Corey. David Gordon Green and Danny McBride’s final trip to Haddonfield brilliantly explores the trauma of a town coping with tragedy at the exact wrong time in a trilogy. This temporary final franchise entry comes home to 4K Ultra HD Blu-ray with an excellent Dolby Vision transfer, Atmos audio, and a smattering of bonus features. Worth A Look

In the wake of the second night he came home, Haddonfield has done everything it could to move on and forget the deaths of so many. Towns may forget, but people don’t. Try as she might to hide her pain, Laurie Strode (Jamie Lee Curtis) is haunted by the death of her daughter as she puts on a brave face to embrace life. But around every corner is a reminder of death and tragedy. Her granddaughter Allyson (Andi Matichak) dives into work to band-aid her pain. And for a young man named Corey (Rohan Campbell), tainted by a horrible accident from years ago, his tragedy will come face to face with the embodiment of Evil - Michael Myers. As Corey’s own murderous inner demons take over, Laurie and Michael will go knitting needle to butcher knife one last time for the ultimate horror franchise smackdown.

To be fair - I didn’t hate Halloween Ends. I do not think this is the worst film of the franchise. I actually thought the character of Corey was a genuinely brilliant addition to the franchise. I thought that Laurie Strode masking her pain by trying to be “tits-out” domestic grandma was a smart avenue for her character as she and Allyson cope with their loss. I loved all of this stuff because it felt real and emotionally raw and was actually a smart path to take for a franchise riddled with stupidity. My problem with Halloween Ends is this was the exact wrong time to pull this particular story card. 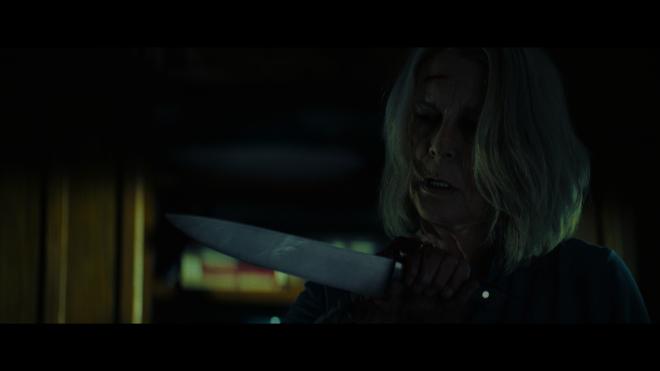 If ever an opening credits font could serve as a warning shot, the use of the Halloween III: Season of the Witch font was it. This is a very different Halloween film from the two that came before. It’s more cerebral (or at least it thinks it is), and much more character focused than previous entries. But the character that gets the most care and attention, Corey, was introduced far too late in this franchise sub-trilogy. I felt Rohan Campbell delivered one hell of a performance here. When we first meet him, he’s likable and funny, and you feel for him when his life goes so bad. But he needed to have been introduced in Halloween (2018) - not two movies later. Most of his transformation would have been a great way to spend Halloween Kills instead of waiting for the next obnoxious chant of “EVIL DIES TONIGHT.”

As Corey gets most of the screen time, this leads the film to an unexcitingly bland final showdown between iconic final girl Jamie Lee Curtis and The Shape. If we'd gotten to know Corey earlier, the focus on him could have meant more, but as a late-in-the-game pinch-hitter killer, he misses the ball. While Laurie and Corey get the most character care and attention, Allyson is frustratingly pushed to the side. After playing a strong and interesting character in the last two films, she just sorta sits there as a passive and irrational plot device instead of someone with an arc. 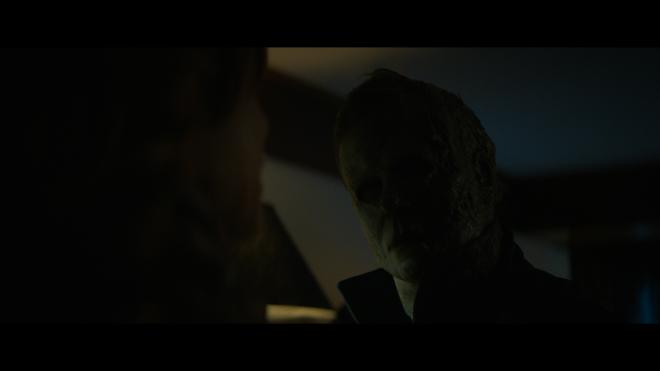 At the end of the day what we see here is another new trilogy that failed to live up to its potential. Halloween (2018) was a welcome return of legacy characters and actors after the franchise went off the rails and dove into a controversial pair of remakes. It was a great way to bring Jamie Lee Curtis' Laurie back after her unfortunately lame death in Halloween: Resurrection and reintroduce The Shape for a new generation of slasher fans. That lone film was enough. It should have stopped there. Halloween Kills and Halloween Ends just didn't need to happen. John Carpenter coming back to score the films is probably the best thing to come from this middling trilogy. David Gordon Green and Danny McBride are just the latest in a long line of filmmakers to take a stab at the franchise with a seemingly fresh take that ultimately doesn't go anywhere. There will be others who think they’ve cracked the code for a new Halloween and I'm sure we'll see the fourteenth film sooner than later. Until then we can all sit back and wait to enjoy Green’s new The Exorcist sequel and Hellraiser television series…

Vital Disc Stats: The 4K Ultra HD Blu-ray
Halloween Ends slices up 4K Ultra HD Blu-ray with a two-disc 4K UHD + Blu-ray + Digital set. The 4K version is pressed on a BD-100 with the 1080p offering up a BD-50 disc. The discs are housed in a two-disc case with slipcover artwork. The discs load to static image main menus with standard navigation options along the bottom and the bonus features menu along the right side of the screen. 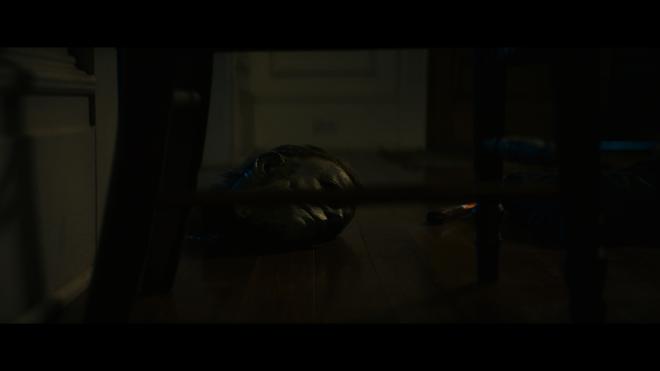 If there’s been one constant with this new trilogy it's each film has scored an excellent 4K transfer, and that trend continues with this 2160p Dolby Vision presentation of Halloween Ends. The film was shot digitally and finished with a 4K digital intermediate. Appropriately dreary and cold, the image is impeccably detailed with facial features, clothing, masks, and gore getting all of the care and attention they deserve. Michael’s cobwebbed burnt mask is a standout for all of the close-up action we see with the short amount of screen time he gets.

The Dolby Vision pass works overtime to keep those black levels and shadows looking as best they can. This is a dark movie with only a few daylight sequences. As has been the case with each of these new Halloween films, black levels are thick but never crushed and shadows offer plenty of light and color gradience to give a notable sense of depth to the image. When Corey wakes up in the tunnel and first meets Michael, the limited light sources and the dour color scheme are nice and creepy. Colors get their moments of pop, and skin tones are healthy without being pushed too tan or orange. Gore effects also get plenty of attention with the ghastly kills getting their due complete with oozy crimson blood work. 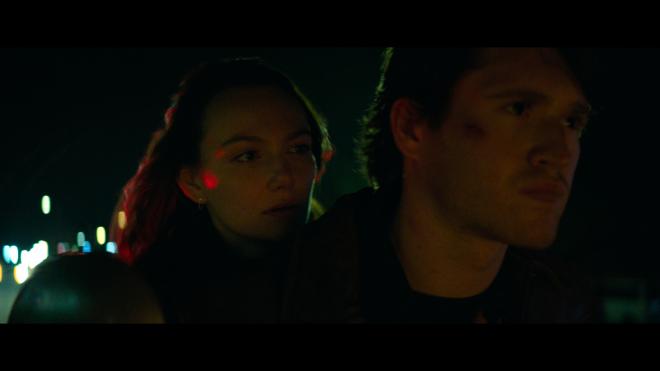 On top of the excellent visuals, Halloween Ends scares up an excellent Atmos audio track. The film really works the quiet moments allowing big locations like the opening house plenty of atmosphere. The massive stairway offers creaks and groans with that ticking clock echoing about the room. A metal junk grinder also gets some interesting attention. Going back to that tunnel location, it’s quiet and creepy with dripping water, echo, and shuffling feet scraping on the concrete for another immersive location example. Throughout, there's enough happening in each scene to keep those surround and height channels active and engaged. Dialog is clean and clear without issue. Levels are spot on without any need to adjust. The best aspect of the track is Carpenter’s moody and creepy score. It helps fill the soundscape without overpowering the elements while also punching up the LFE with those low pulsing tones. 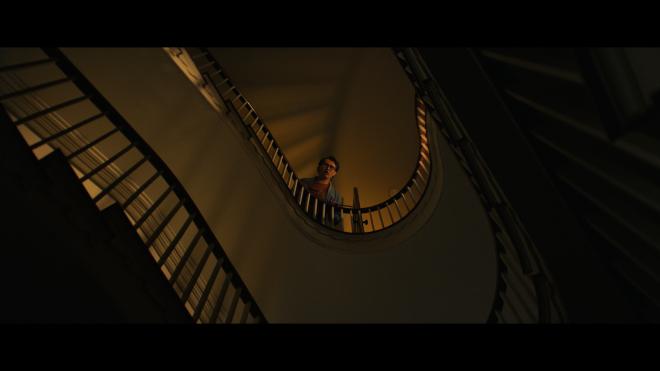 As has been the case with each film there’s a decent assortment of bonus features attached. The audio commentary is the most interesting and informative of the lot, the deleted scenes aren’t all that interesting except for an extended piece where Corey finds where Michael has been storing some dead bodies for the last few years. The featurettes are pretty basic simple and brief looks at various aspects of the film. The Blu-ray disc has the same bonus features but obviously in 1080p and not UHD. 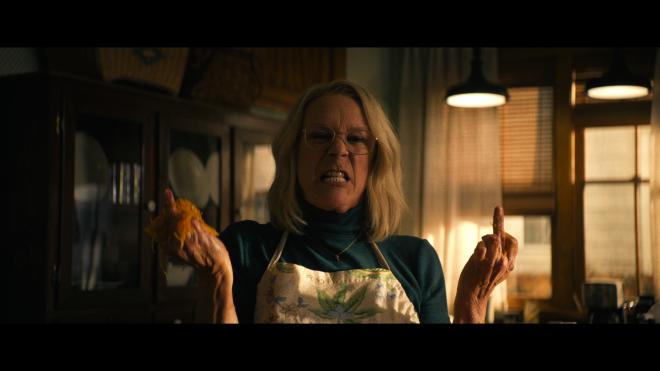 Halloween Ends is just another run of many potentially interesting and franchise-reinvigorating takes that simply miss the mark. Halloween (2018) started on an exciting note only to lose its path with Halloween Kills and never recovered with this final chapter. Clumsy and clunky, it’s still not the absolute worst Halloween film, but it’s far from being a masterpiece. Universal unleashes an excellent 4K Ultra HD Blu-ray release with an excellent Dolby Vision transfer, an impressive Atmos audio track, and a fine assortment of bonus features to dig through. A technically excellent disc for a mediocre film - Worth A Look