After H20 gave the series little room to maneuver for future sequels, Halloween: Resurrection was practically DOA before it even had a chance to get going. Combining the reality TV craze with pre-YouTube cyber content hijinks, the story could have worked but it gets silly fast as a group of fame-hungry college students follow Busta Rhymes into Michael Myer’s childhood home. This film never had a great disc release and this 4K scan and Dolby Vision HDR is a welcome refresher with the same solid audio and some excellent new interviews and extensive archival bonus features. Even as a franchise low point, it’s still a weirdly entertaining flick - Worth A Look

The evil of Michael Myers didn’t die that night. Laurie Strode (Jamie Lee Curtis) has been committed to an asylum patiently waiting for the last few years for her brother’s return. After ending their family feud once and for all, Michael retires to the solitude of the dilapidated rotting husk of his birth home to live peacefully eating rats in the basement. But Dangertainment founder Freddie Harris (Busta Rhymes) has other ideas. Combining the reality TV craze with cyberspace, he’s bringing the ultimate thrill to live entertainment with a group of cash-strapped college coeds “investigating” the home of Michael Myers. Little do they know the most prolific mass murderer in history lurks in the shadows…

After a delayed production with numerous reshoots, Halloween: Resurrection finally hit theaters – in the middle of the summer. It’s never a good sign when a holiday-themed horror movie like Halloween opens in the middle of July. In fact, I went to see this opening day for my 20th birthday… dear god it’s been that long? Walking into the theater that day I knew it was going to be a mess. Despite having Halloween II director Rick Rosenthal back at the helm, the trailers just made it look like any number of other low-rent Dimension Films releases of the late 90s and early 2000s. By this point, the franchise just became a cash grab where models and hip-hop artists were more of a draw than a legacy cast member or the star killer of the film. Let’s be honest, it’s not a good thing when Jamie Lee Curtis gets billed after Tyra Banks in the opening credits.

While my opinions for this film have warmed in recent years, I still pin this as a low point for the franchise. It’s uninspired resting on cliches and its best conceit of using multiple cameras worn by the cast didn’t liven up the hype. However, it did help future Starbuck and Bo-Katan actress Katee Sackhoff along with Bianca Kajlich, Sean Patrick Thomas, and Luke Kirby get their legs under them. So that’s something. With all its faults, I still enjoy Halloween: Resurrection. I dutifully watch it every year with my annual franchise binge. I watch this one like how I enjoy watching Friday the 13th: Part V A New Beginning, it’s junk food entertainment. 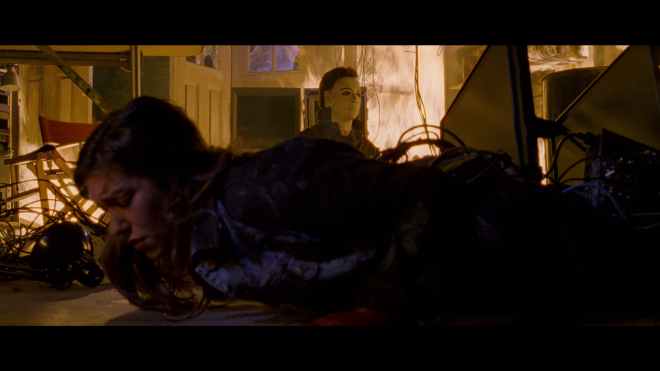 Vital Disc Stats: The 4K Ultra HD Blu-ray
Halloween: Resurrection slips onto a new 2-disc 4K Ultra HD Blu-ray from Scream Factory. The discs are housed in a standard two-disc case and are not stacked. The case is enclosed in a hardstock slipcase and the insert artwork is reversible depicting the original theatrical poster art. Each disc loads to an animated main menu with traditional navigation options. The bulk of the bonus features are found on the 1080 Blu-ray. This release is only available as part of Scream Factory’s The Halloween 4K Collection set.

Celebrating its own 20th Anniversary this year, Halloween: Resurrection scores a solid 4K Ultra HD Blu-ray with Dolby Vision HDR release. Part of the problem for this film that’s plagued all past releases is the film style itself. Intercutting 35mm and SD digital elements is a bit jarring so the appearance of the image can fluctuate rapidly within any given scene. The beginning and the film’s climax where the digital camera foolishness isn’t in play genuinely looks terrific and the most stable. With this new scan, details are much stronger than past releases that suffered from edge enhancement and some form of smoothing - especially that terrible Eco Bridge release. Those troubles thankfully aren’t an issue here and film grain has a more natural quality than before. Those previously mentioned digital camera shots come with their own issues, but they’re baked in and can’t really be helped. The film as a whole – 4K and Blu-ray both – takes a slightly darker appearance compared to Scream’s previous 2014 release, but nothing too dramatic. 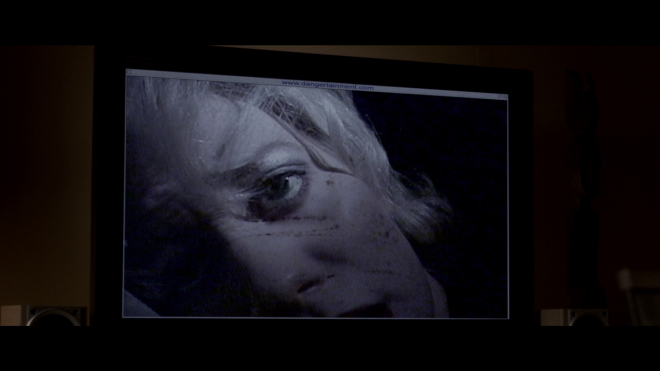 With Dolby Vision HDR (and HDR10), the film picks up quite a few welcome enhancements. Once the film moves to the Myers house, the lighting is minimal and there are a lot of shadows. This compounds once things move towards night and light coming in through the windows is more blue-hued. Shadows and blacks are stronger without crush issues with lighting getting better accents. Blues that looked more purplish in past releases are a stronger more natural twilight shade. Blood reds are a healthier crimson and skin tones look more normal and healthy. All around a welcome improvement. 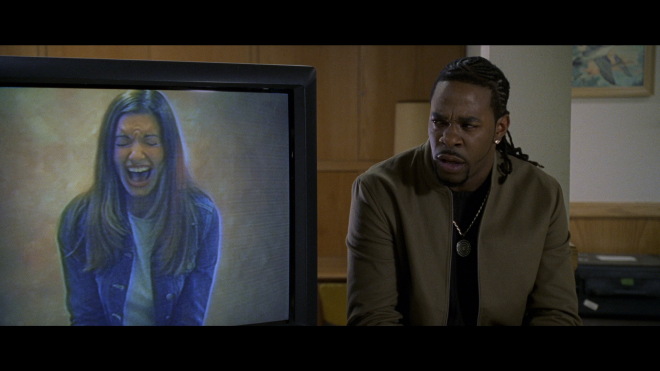 And like it’s kinfolk within this set, Halloween: Resurrection returns with the same DTS-HD MA 5.1 and 2.0 tracks. While the movie may not be the best, I was always impressed with this film’s sound design using the vacant space of the Myers house to add some nice creeks and groans to the soundscape. Dialog is clean throughout without issue there. Scoring is well handled adding suitable tension to the scenes. Again depending on how you’re set up at home, the 5.1 track is the best way to go and if you can, definitely kick on that DTS Neural:X function. 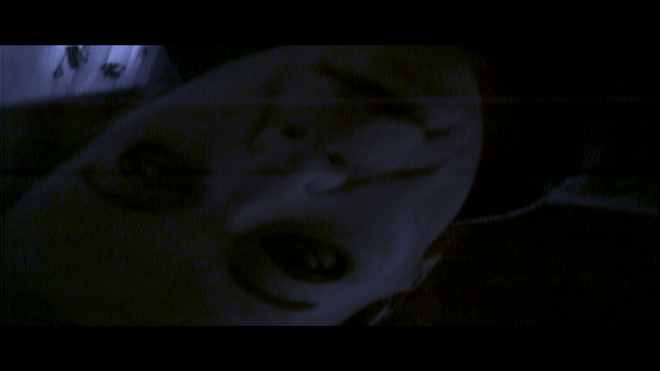 Of the three films in this new box set, this one gets the most love with a ton of new interviews with various cast and crew. Some of these interviews aren’t very long but fans can pick up a number of great trivia and production tidbits that we hadn’t gotten in previous releases. You can tell everyone was trying their best to work up something worthwhile for this one and it sounds like most folks had a good time. I especially dig Gary Tunnicliffe's interview, he’s a lot of fun detailing all the gore. I met him when Scream 4 was in production and he’s a hoot if you ever get a chance to chat with him. 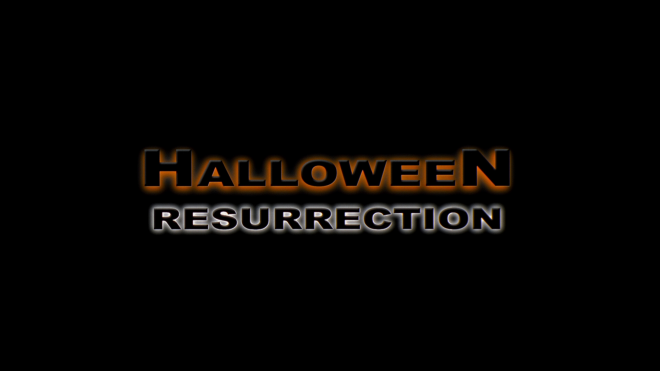 I don’t hate Halloween: Resurrection. Many do, but I don't. While I find it entertaining, I'll absolutely admit it’s still a franchise low point. Out of ideas and nowhere to go, they kill off the franchise star far too early and easily to be meaningful and the film’s hip and cool look at internet technology painfully dates the film. But that’s also part of the lasting charm. Rosenthal definitely gives it his best shot and honestly, it could have turned out much worse in lesser hands.

Halloween: Resurrection joins its franchise siblings for a new 4K Ultra HD Blu-ray release from Scream Factory. The new 4K scan cleans up a lot of the mistreatment exhibited from past discs looking sharper and clearer with healthier colors and thanks to Dolby Vision on the 4K disc, there’s a much stronger sense of image depth and stability. Cap this release off with a bunch of new great bonus features interviews it’s a great addition to the franchise collection - Worth A Look