After an explosive end to the fifth film, Halloween: The Curse of Michael Myers aims to tread old ground while expanding and explaining the Michael Myers mythology. With abundant ghoulishly effective kills, the story was a convoluted mess and effectively killed the franchise. Now Scream Factory gives both the Theatrical Cut and the fan-favorite Producer’s Cut a new 4-disc set offering a new 4K scan with Dolby Vision HDR that looks amazingly clean and detailed but the new color timing may rankle some longtime fans. The audio is clean and clear and the bonus features are stacked. Worth A Look

After the explosive finale to Halloween 5: The Revenge of Michael Myers, Jamie Lloyd and Michael Myers went missing for ten years. Haddonfield has banned Halloween, and Dr. Loomis is enjoying his retirement burying the ghosts within a manuscript. But evil never stays dead. Now a new family is living in Michael’s old family home, and the killing begins again. Survivor Tommy Doyle believes he’s uncovered the key to stopping Michael’s madness. With Loomis’ help, Tommy hopes to stop Michael’s reign of terror and destroy the cult that worships him.

Halloween: The Curse of Michael Myers was the first Halloween film I got to see in the theater. Given the box office receipts on this one, it shouldn’t have been a surprise that my dad and I were the only two people in the theater that day. I’d just recently gotten into the franchise by that point so the events of Halloween 4 and Halloween 5 were fresh in my brain and I was eager to find out what happened next. I loved Joe Chappelle’s sequel then, and I still have a soft spot for it today. It’s a sequel that was too late to the show for its own good and then the already convoluted mythology of Michael Myers was thrown for a loop with the cult of Thorn angle. I will say the Producer’s Cut with over 45-minutes of alternate footage is the superior version, but it’s still a deeply flawed flick whichever version you watch. On its own terms, I think it’s a nice and delightfully creepy film with a dark mood and atmosphere and plenty of great gory kills to hold your attention. 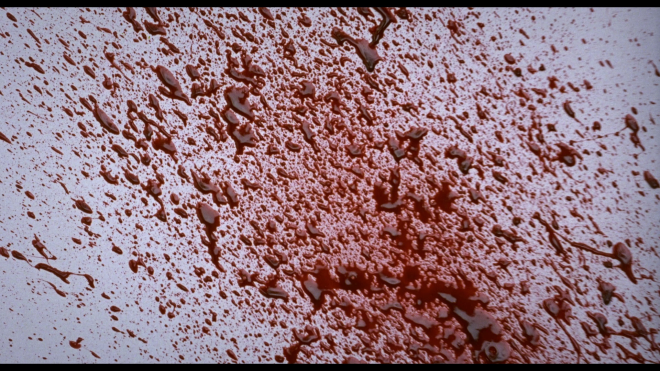 Vital Disc Stats: The 4K Ultra HD Blu-ray
Halloween: The Curse of Michael Myers stalks onto 4K Ultra HD Blu-ray with a new 4-disc set from Scream Factory. You’re getting a 4K Ultra HD Blu-ray and 1080p Blu-ray for both cuts of the film. Housed in a 4-disc case, each disc gets its own tray to rest on, however, the locks for each tray are pretty thin and the discs can easily slip right off if jostled too aggressively. My review copy came in fine but as soon as I started handling the set and looking at it the discs came loose, so look out for that. The case is housed in a slipcase cover but the insert art is reversible depicting the original theatrical poster art. Each disc loads to an animated main menu with traditional navigation options. The bulk of the bonus features are found on the 1080 Blu-rays. This release is only available as part of Scream Factory’s The Halloween 4K Collection set

Both versions of Halloween: The Curse of Michael Myers gets a new 4K and Blu-ray release sourced from a new 4k scan - and fans may be a little irked by some of the color timing changes and the slightly narrower aspect ratio. I personally like the new color timing, it’s a cooler image with more of a fall feel with more golden tones and shadows are more ominous and dark, but there are moments where yellows and oranges are notably much stronger and that’s where I can see folks taking umbridge with this release. I don't know anything about the origin of the scans or color timing, so I don't know if this is a case where Scream Factory did the work or if someone else did it and they were handed what they were given.

First I’ll dive into the 4K Ultra HD Blu-ray. This new scan is certainly cleaner, and clearer, with incredible details and a more naturally cinematic grain structure than past releases. Especially for the Theatrical Cut which wasn’t given the same care and attention as the Producer’s Cut for Scream’s big 2014 box set. Instances of speckling are no longer present and old signs of edge enhancement are no longer an issue. Facial features and details in Michael’s mask and some of the gore bits and pieces are clearer and easier to fully appreciate. 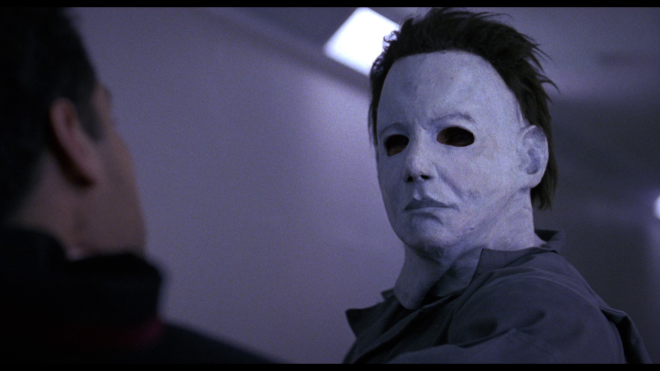 Now the elephant in the room, there has been a notable shift in the color timing for both cuts and it can be a tad dramatic. The first thing folks will likely notice is that shadows are much deeper. They get very close to crush but thankfully with Dolby Vision HDR (and HDR10) they pull back from the brink so there’s still a terrific amount of image depth to enjoy. Whites are crisper and more natural pure white than before - in past discs whites had more of a pinkish tone and that’s no longer an issue. Skin shades are also less pinkish but still look like folks who live in the midwest in the fall and can’t get a tan. Colors also take on a darker greyer shade so greens aren’t quite as bright and are now more rotten olive colored. Reds come in beautifully and blood isn’t as pink and more appropriately crimson. In the theatrical cut when Michael is chasing Tommy and Kara through the tunnels, that spinning red light is a beautiful effect. Where issues crop up for both cuts is with pushed oranges and yellows for some scenes. When Tommy is telling Kara about his Thorn theory, the orange/yellow candle light is a lot stronger with deeper darker shadows and you lose a little of those production design details to the already dark background. Dolby Vision greatly helps throughout these areas so they’re not so severe or overplayed, which sadly is an issue for the Blu-ray copies.

The new Blu-rays are sourced from this new scan and color timing, and largely is a pleasing effect. The more time I’ve had to sit with the new coloring I like what I see and the mood and vibe it gives. But, for the SDR Blu-rays that miss out on those Dolby Vision HDR refinements, blacks are precariously close to crushing and those stronger yellows and oranges are very hot. As a whole I do like the new transfers, I think it works for this film and there are benefits with the changes made, but that color timing is certainly going to be a sticking point for a number of fans aiming to grab this set largely just for this one film.
4/5 - 4K Ultra HD
3.5/5 - Blu-ray 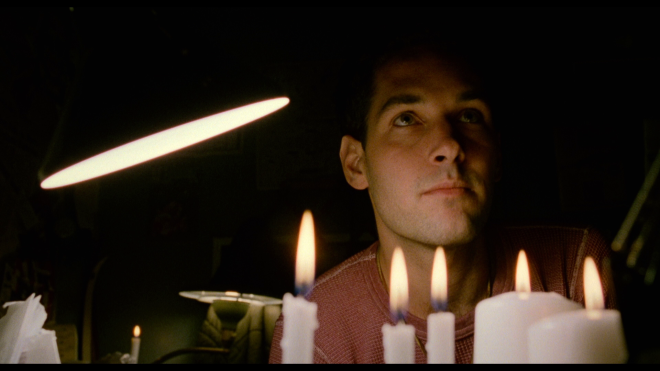 Flipping around the multitude of discs replaying a variety of sequences again and again for both cuts, it sounds like the same decent DTS-HD MA 5.1 and DTS-HD MA 2.0 tracks were brought over again for this new 4K and Blu-ray release. These aren’t terrible tracks by any stretch and depending on your setup they work well. The 5.1 track is the stronger option of the two, but it’s still not the most immersive experience. Front/Side channels are active enough but there’s a thinness to the mix. Kicking up my receiver’s DTS Neural:X function greatly improves the experience and makes the track feel more full and lively. 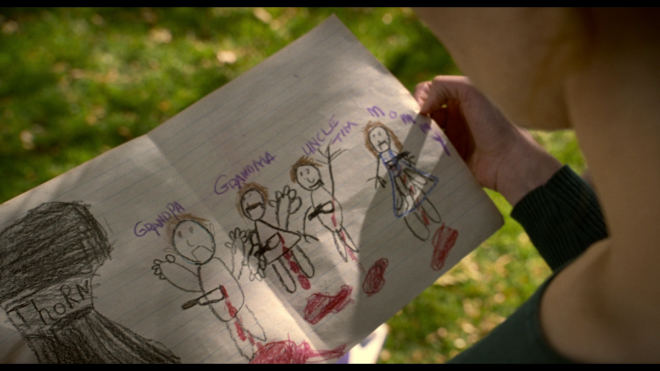 Carrying over the bulk of the bonus features from their big Ultimate Collection, Scream gives the Theatrical Cut a terrific new audio commentary moderated by Michael Perez and featuring screenwriter Daniel Farrands and actress Marianne Hagan - and it’s a delight! The trio offers up a ton of information about the film and when they get to the reshoots there’s an amazing amount of material and insights. Everything else is archival, and if you haven’t gone through it before, it’s a great set to dig in and enjoy. 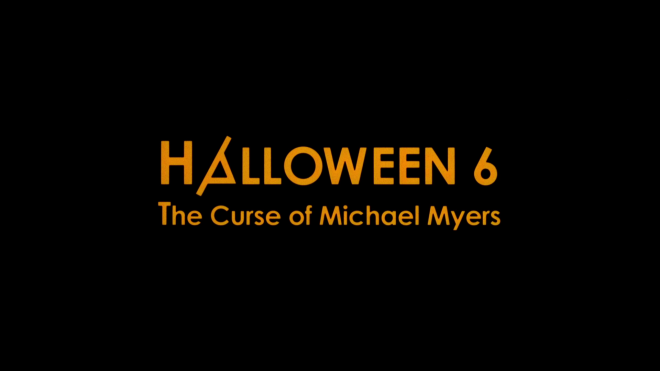 Halloween: The Curse of Michael Myers is the very definition of a rough production. The stalled franchise had few options on how to proceed forward and when the film was done, extensive reshoots dramatically altered the tone and feel of the film. The Producers Cut is without a doubt the superior version but it again pins the franchise into a corner of not being able to continue after the passing of series stalwart Donald Pleasance. As the first Halloween film I saw in theaters, I do have a deep love for this flick, warts and all.

Scream Factory delivers Curse of Michael Myers fans a new 4K Ultra HD and Blu-ray sourced from a new scan for both versions of the film. While I kinda like the new color timing, it’s pretty dramatic and adds more mood and creepiness to the film, but I can see a lot of fans getting rankled by it. There are many improvements to see and appreciate but it’s definitely different. The same decent audio mixes have been brought back over. All past bonus features return with an excellent new audio commentary for the Theatrical Cut to dive into. On the whole, this is a fine upgrade, I dig it overall, but you can’t make a change to a Halloween movie without sparking some sort of controversy, and this one no doubt will be discussed extensively.
For Fans Only.