The King of Rock ‘N Roll trades in his blue suede shoes for a pair of sandals and a surfboard as Elvis Presley headlines the song and dance beach romp Blue Hawaii. The epitome of the 60s “Beach Flick” the film could be easily dismissed if it wasn’t for The King doing what he does best alongside a terrific cast including Angela Lansbury as his mom! The 36th entry in the Paramount Presents line, Blue Hawaii scores a lovely 4K Dolby Vision transfer free of any horrible tinkering, solid audio, but sadly rather skimpy in the bonus features. All in all, if you’re an Elvis fan, it’s good to be the king. Recommended

The army was supposed to make a man out of Chadwick “Chad” Gates (Elvis Presley), but instead, all it did was make him miss the warm waters of Hawaii and his best gal Maili (Joan Blackman). His mother Sarah Lee (Angela Lansbury) believes Chad should carry on the family business with his father - but he has other plans. Aiming to become the preeminent tour guide of Hawaii, Chad and Maili take on an eclectic set of first clients: the strict schoolmarm Abigail Prentice (Nancy Walters) and her four beautiful teenage students. If Chad doesn’t get in trouble with his mother, trouble is going to find him one way or another!

It’s easy to say Elvis movies can be a bit hit or miss. At the peak of his powers in the recording industry and selling out movie houses, Elvis was in his prime for Blue Hawaii. At 26 he was already a legend, but his films were hardly legendary. As the Hollywood machine would churn and burn out so many so fast, good films often get lumped in with the bad and dismissed altogether. While Blue Hawaii was the first of his three Hawaiian-themed beach flicks, it’s the best of the bunch and while uncomplicated or overly ambitious, it’s actually a hell of a lot of fun.

Not many would give Elvis credit as an actor, but like his music, the man had a rhythm and timing for comedy. Written by Road to Bali comedy writer Hal Kanter, the snappy dialog and slick suggestive one-liners crackle with every exchange. Everyone from Elvis to his “mother” Angela Lansbury to his father played by Charlie Chan actor Roland Winters deliver the gags. One plot beat after another is left to either a gag or set up another song and dance interlude showing the range of talent on screen. Blue Hawaii is a gas, but as much as I enjoyed it, it’s far from being the greatest film ever. 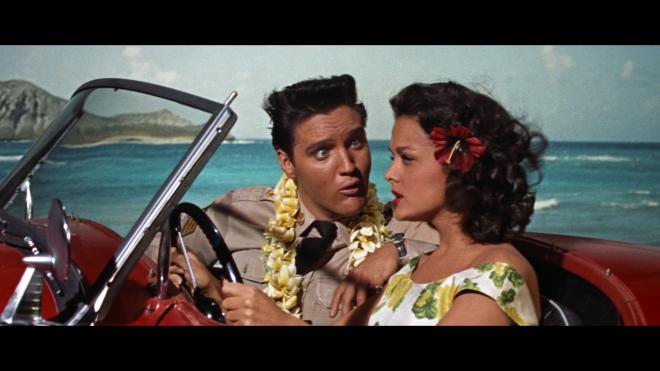 Part of the issue I have with it is it’s just an odd production. The film hinges on the magnetic talents of its lead but chooses some odd areas to showcase his abilities. Take the film’s first song and “dance” number. Elvis is in a car with Joan Blackman. They’re driving on a road and the song breaks out. Even if you’re not a fan of The King, you know the man isn’t one to sit still while he sings, and yet, he’s shimmying and shaking away… but in a car. It’s a fine catchy and silly tune, but it’s one weird way to kick off a musical comedy when you can barely see the star around a faux convertible in front of a rear-projected Hawaiian highway.

And speaking of rear-projection backgrounds, for a movie that spent nearly a month shooting on location, there is a plastic-manufactured quality that becomes steadily distracting. There are a number of pickup shots that were clearly grabbed when the production moved back to the studio lot and the flip-flop from real Hawaii to fake Hawaii can be jarring. Given how many films Elvis starred in it’s clear to see these films like Blue Hawaii were shot as fast as possible. 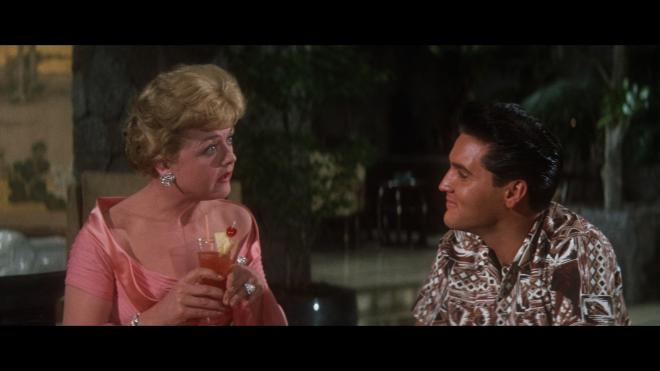 Production niggles and plot simplicity aside, I had fun with Blue Hawaii. I know I’d seen it before but it’s been so long that I scarcely remember it beyond the iconic Can't Help Falling In Love scene. While she may have been barely ten years older than him, Lansbury played a hilarious domineering “mom” for Elvis. Her over-the-top southern belle accent sells the absurdity. Joan Blackman was a nice foil for Elvis through all of the double-entendre jokes without playing to the absurdly stale beach bimbo gal pal vibe of so many other films of this sort. He may not get many moments to shine, but Roland Winters puts in some fun zingers as well. Simple and to the point, Blue Hawaii is just easygoing fun. It’s a great flick for a dreary cold snow-less Michigan winter.  The sun is bright and the tunes are right.

Vital Disc Stats: The 4K Ultra HD Blu-ray
Blue Hawaii marks the 36th entry in Paramount Presents line of classics. A two-disc 4K UHD + Blu-ray + Digital release, the discs are housed in a standard clear two-disc case with a book-style slipcover that opens up to the film’s original theatrical poster art. The 4K is pressed on a BD-66 disc with the 1080p scoring a BD-50. The disc loads to a static image main menu with basic navigation options. All of the bonus features are found on the Blu-ray. 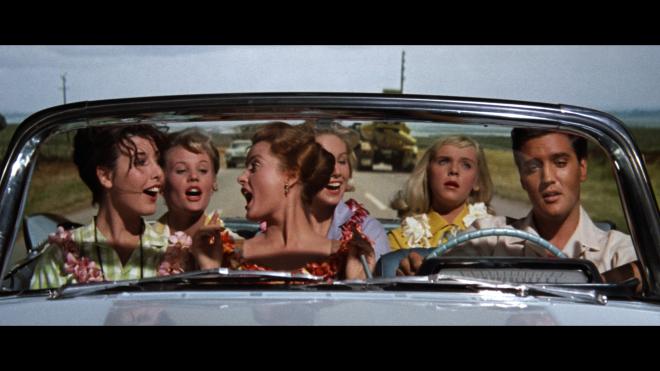 This is a Paramount release and so that comes with some baggage - but thankfully that baggage didn’t make the trip for this release. I don’t know what or why certain titles get Paramounted, but Blue Hawaii wasn’t subjected to the treatment and comes in with a glorious 2160p Dolby Vision transfer. Not only that, Paramount even beautifully recreated the film’s opening credits so they’d be up to par with the rest of the presentation. Details are terrific allowing you to fully appreciate fine lines and, facial features, and the rather silly makeup they slathered on Lansbury to make her look much older than her actual age of 36. Film grain also doesn’t look to have been throttled, tinkered with, or DNR’d into oblivion - and if a sequence has any it’s so slight you’d have to really be looking for it to notice.

Dolby Vision does exactly what it’s supposed to and highlight the bright beautiful bold colors, enhancing the lovely inky black levels, and making those whites look nice and crispy. From some uncomfortably short white shorts to the flowery leis, this is a gorgeous film. The bright blue skies, the water, the foliage, it’s a stunning flick. In fact, the only “flaw” I see here is that when the film relies on rear projection, it just makes the effect painfully obvious. True location shots look terrific with an amazing sense of three-dimensional depth. Then those rear projection shots happen and there’s depth, but only as far as that screen. Other than that little niggle, this is a terrific transfer to celebrate and shows that when Paramount actually has their stuff together, they can make the classics shine. 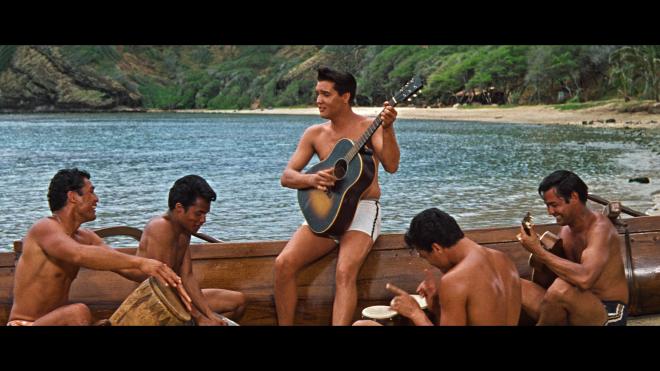 This 4K release of Blue Hawaii surfs away with a new Dolby TrueHD 5.1 track that handles itself nicely, but is not necessary. There’s very little “surround” presence as the film keeps itself working the front/center channels with very little bleed into the other channels. While this is hardly the most immersive track ever authored, it at least covers the basics of the film nicely. Dialog is clean and clear without issue. Sound effects are lively and present giving those beach locations and party scenes some life. Then you have Elivis’ signature tunes and he certainly delivers. 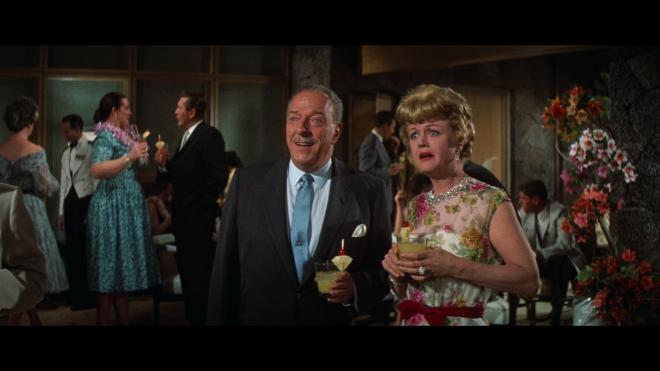 Sadly, in keeping with other entries in the Paramount Presents line, bonus features aren’t exactly a show-stopping collection. The audio commentary with Elvis historian James L. Neibaur is very interesting, but he also pretty much just reads from a script rather than any kind of scene-specific track or anecdote. It’s more like an oratory report played over the film, but it's interesting and worth the listen. After that, it’s a photo gallery and a pair of trailers. All bonus features are on the 1080p Blu-ray. 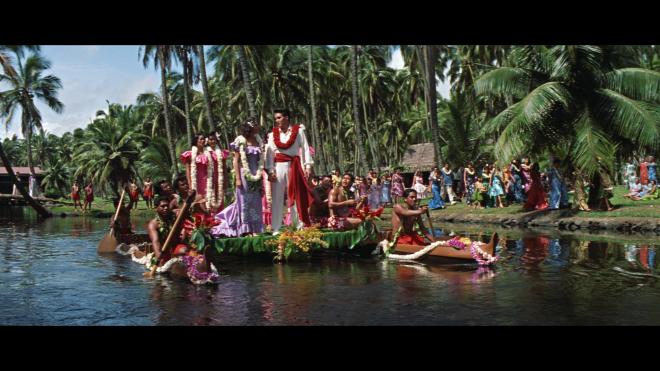 Like so many of the movies starring Elvis Presley, Blue Hawaii won’t be mistaken as one of the greatest cinematic achievements of any generation. While it may not be the most incredible thing ever, the movie is entertaining. Elvis was a unique talent and sadly the flick shows never let him fully give what he had to offer beyond pushing him from one song to the next. But, with some fun comedy, beautiful scenery, and several classic tunes, this is a fun film. Paramount delivers a terrific Dolby Vision transfer for this iconic beach flick with a solid audio track to match. Sadly bonus features aren’t all that much to sing about, but the audio commentary is worth checking out. If you’re an Elvis fan, this is one of his better, more entertaining shows and makes a great entry on 4K - Recommended.