Just in time to make our holidays brighter and way more colorful, Elf arrives on 4K UHD with an HDR transfer that's lush, vibrant, and as crisp as a fresh blanket of snow. The delightful Christmas comedy about Buddy the Elf (Will Ferrell) and his quest to find his long-lost dad, gain his love and acceptance, and defrost the beautiful but jaded Jovie (Zooey Deschanel) has never looked better, and thanks to the addition of a DTS-HD MA 5.1 track, director Jon Favreau's festive film finally sounds great, too. For many, Elf is a holiday tradition, and this terrific upgrade will keep it going strong for years to come. Highly Recommended.

Success in the cluttered holiday movie realm requires a festive and reverent tone, the right balance of humor, warmth, sentiment, and thrills, and - most importantly - enough staying power to remain fresh and lively over the course of many, many, many repeat viewings. Elf checks all those boxes and has been a favorite of my family ever since it premiered back in 2003. At that time, our kids were 12, 10, and 7, and director Jon Favreau's delightful film captivated us all. Years passed and the children grew up, but the magic of Elf stayed with them. As you can probably guess, we own a ton of Christmas movies, but whenever our "kids" come home for the holidays, the one we always seem to watch is Elf.

By now, almost everyone knows the charming story of an orphaned baby who crawls into Santa's toy bag one Christmas Eve and gets whisked to the North Pole, where he's raised by elves and grows up believing he's one, too. When the sweet-as-a-sugarplum but hopelessly naive Buddy (Will Ferrell) discovers his human heritage, he ventures to New York City to track down his long-lost father (James Caan), an unscrupulous children's book publisher who not only doesn't know Buddy exists, but who's also - horrors! - on Santa's naughty list. 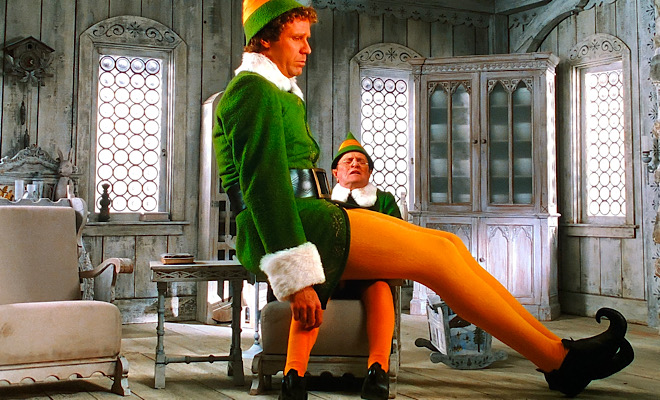 Buddy's child-like wonder, boundless seasonal enthusiasm, insatiable appetite for sugar, and genuine warmth make him an irresistible character, and Ferrell plays him with just the right mix of goofiness and sincerity. As a stranger in a strange land (and could there be any stranger land for a sheltered man-child than the Big Apple?), Buddy must adapt to a whole new set of rules and morals, and some of the film's best moments occur when he interacts with a gruff, cynical populace that's as frosty as an icicle.

Buoyed by its unique and inspired premise, Elf sails along for its first hour or so, brilliantly mixing hilarity and sweetness. Watching Buddy awkwardly adapt to the real world, spread Christmas cheer, and forge bonds with his newfound family and the jaded, downtrodden Jovie (Zooey Deschanel), a department store employee with whom he becomes instantly smitten, is great fun, but clichés crop up toward the end. The obligatory save Christmas climax and sudden renewal of seasonal spirit are tried-and-true staples of holiday movies, and while Elf handles them with flair, it's hard not to wish for a more original and clever finish. 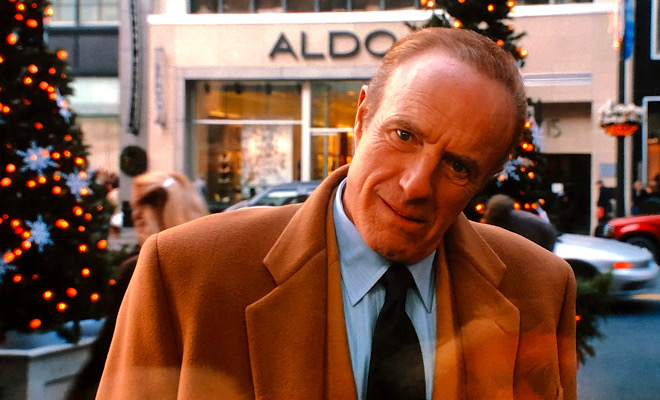 Nevertheless, Favreau strikes the perfect tone and deftly paces this bright, colorful Christmas film. His periodic nods to the characters and animation technique of the classic Rudolph the Red-Nosed Reindeer cartoon are wonderful touches that emphasize Buddy's child-like nature and add a welcome hint of nostalgia to the tale. Favreau also gives the movie a boost with a low-key but effective cameo as the doctor who performs a blood test to confirm Buddy's paternity.

Buddy the Elf is without question Ferrell's most endearing portrayal. Though better known for raunchy humor in the Ron Burgundy vein, he fully embraces Buddy's wide-eyed innocence, genial nature, and limitless capacity for love. He and Deschanel mesh well together, but it's Ferrell's chemistry with the crusty Caan that really fuels the film. Of course, Caan's recent death made this year's viewing of Elf bittersweet, but it also added more resonance to the actor's low-key, finely nuanced performance. Though his turns in The Godfather, Brian's Song, Thief, and Misery will always outshine his work in Elf, Caan brings his patented tough-tender persona to the role and tempers Ferrell's lunacy. 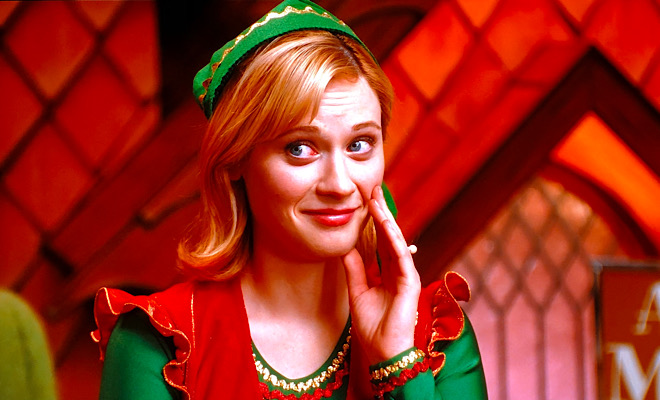 Mary Steenburgen, Edward Asner (who we also lost just a little over a year ago), Peter Dinklage, Amy Sedaris, Michael Lerner, and Andy Richter lend the picture additional zip, but looming high above them all is the incomparable Bob Newhart, who brings his patented brand of dry, sardonic wit to the proceedings. As the bachelor elf who raises Buddy, Newhart is - in a word - priceless. His deadpan facial expressions and droll line deliveries raise the laugh quotient exponentially and set the madcap tone of Elf, which wouldn't be nearly as memorable without his participation.

Along with Home Alone, Elf is my favorite modern holiday movie. It excites the senses, oozes Christmas spirit, keeps us smiling, warms our hearts, connects with every member of the family no matter how young or old, and is fun to revisit year after year. (I still laugh out loud every time I see it.) If that isn't the perfect recipe for a timeless Yuletide flick, I don't know what is. 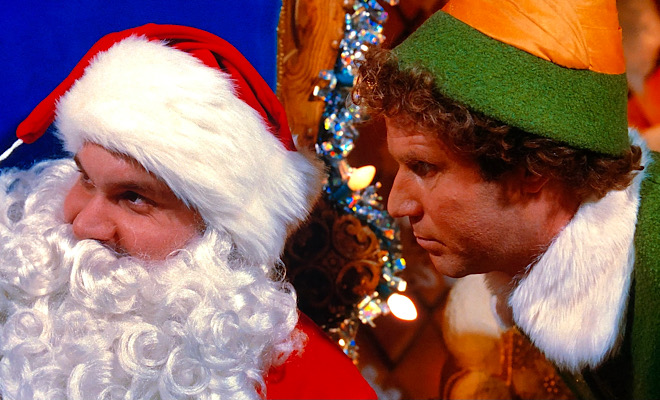 High-Def DIgest previously celebrated Elf on Blu-ray a couple of times, check out our previous reviews:

Vital Disc Stats: The Ultra HD Blu-ray
Elf arrives on 4K UHD packaged in a standard case inside a sleeve. The 2008 Blu-ray disc and a leaflet that contains the Movies Anywhere digital copy code are tucked inside the front cover. Video codec is 2160p/HEVC H.265 with HDR and audio is DTS-HD Master Audio 5.1. Once the disc is inserted into the player, the static menu with music and dialogue immediately pops up; no previews or promos precede it.

With all the reds, greens, and golds on display and all the falling snow, holiday movies are a natural for 4K UHD, and Warner's eye-popping rendering of Elf serves up a potent Christmas cocktail that intoxicates the senses. The 2160p/HEVC H.265 transfer with HDR is a big step up from the 2008 Blu-ray, which literally pales in comparison to this vibrant, crisp, colorful effort. It seems some remastering has been performed, and the result is a lusher, sleeker picture with less grain that still maintains a film-like feel. The faint print damage that plagued the Blu-ray is gone, fabric textures like fur, tweed, and wool are much sharper, depth is more palpable, blacks are richer, whites are brighter, and the image exudes far more dimension. Papa Elf's spectacles seem to jut outward and it feels as if we can reach out and grab the animated snowflakes that fall while Buddy chats with Leon the Snowman. 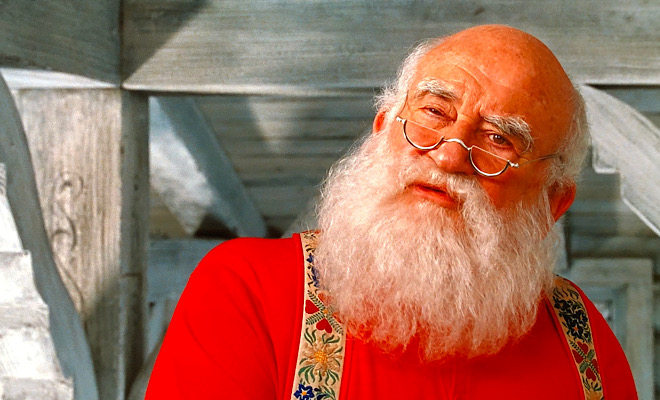 If one element of this transfer stands out, it's without question the dazzling color. While I would have loved to see what Dolby Vision could do with Elf's vivid and varied palette, the HDR is no slouch. The blazing reds of Santa's sleigh, the Etch-a-Sketch frames, the elves' outfits, and the sweatsuit of the Santa lookalike on the street are breathtaking, as are Buddy's green wool jacket and gold tights, the gleaming yellow taxis, and the fabricated blue sky in the animated sequences. I've seen the Rockefeller Center Christmas tree in person many times, but I don't think it's ever looked more beautiful and magical or twinkled more brightly than it does here. Even earth tones like Walter's camel-colored overcoat grab attention. Flesh tones appear more natural than on the Blu-ray (although they do slightly err on the orange side), and much more pronounced contrast boosts the impact of muted hues, too. 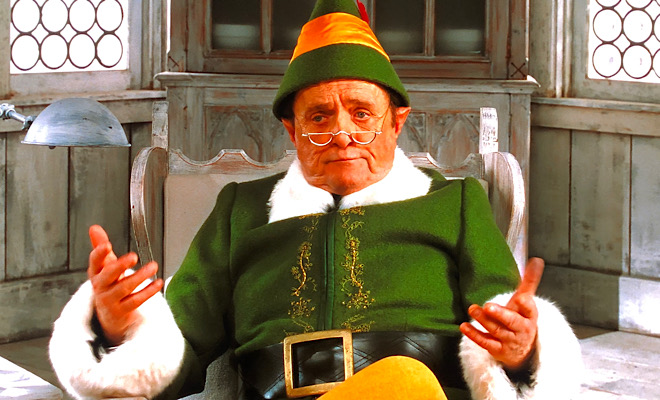 It's tough to look at the flatter, duller Blu-ray after watching this far superior 4K UHD transfer. If you're an Elf fan, an upgrade is mandatory.

This 4K UHD disc dumps the Dolby TrueHD 5.1 track on the 2008 Blu-ray in favor of a DTS-HD Master Audio 5.1 track, and though the enhancements are subtle, it's a nice upgrade. Greater presence, fuller tones, more distinct stereo separation, and a slight volume boost lend the mix a more immersive feel, and bass frequencies wield more power, especially during the climax when Santa's turbo-charged sleigh makes several aborted lift-off attempts. Some palpable surround activity occasionally punctuates the action, but most of the sound is anchored up front. A wide dynamic scale gives John Debney's music score and all the soundtrack tunes plenty of room to breathe, distortion is absent, and all the dialogue is well prioritized and easy to comprehend. No one will choose to upgrade Elf for the audio alone, but the better sonic quality on this 4K UHD disc is a welcome bonus.

All the supplements from the 2008 Blu-ray have been ported over to this 4K UHD release. Both audio commentaries reside on both the 4K UHD and standard Blu-ray discs; all the other extras are housed on the Blu-ray. For a complete review of all the special features, check out our coverage of the 2008 Blu-ray by clicking here.

A big step up from the 2008 Blu-ray, the 4K UHD edition of Elf supplies even more Christmas cheer, thanks to a vibrant, razor-sharp transfer with HDR that bursts with vivid color. The addition of a DTS-HD MA 5.1 track amps up the audio and makes an upgrade of this modern holiday classic a no-brainer. In our house, Christmas just wouldn't be Christmas without Buddy the Elf, and this superior 4K UHD presentation ensures we'll be enjoying annual visits for years to come. Highly Recommended.