Steven Soderbergh’s stylish and intense revenge/thriller The Limey packs a bag and finally comes to the U.S. on 4K Ultra HD Blu-ray from Lionsgate. A two-disc SteelBook exclusive from Best Buy, the film is one of the best in the Oscar-winning director’s extensive catalog of films featuring a razor-sharp performance from Terence Stamp. With an excellent Dolby Vision 4K transfer, the film’s slick editing and cinematography look better than ever coupled with excellent audio and a fine selection of bonus features. Highly Recommended.

His name is Wilson (Terence Stamp). After getting out of prison in merry old England, he’s traveled to Los Angeles with nothing but a letter informing him of his daughter Jenny’s death in a car accident. While estranged from his daughter, he knows her character and suspects foul play. As he picks away at the pieces of her life, he picks up on the trail of music mogul Terry Valentine (Peter Fonda) whose illicit side deals may have led to Jenny’s demise.

I love a good revenge thriller that is a lot more than just a simple revenge thriller. Exacting vengeance is easy. Character loads a gun with a bullet, BOOM, problem solved. But that doesn’t make a great movie. It barely even starts a movie. But you drop a character into an alien and unknown location with only his wits and instinct, a couple of willing aides, and a deeply personal motivation, and you’ve got something to get excited about. Potentially. Like any film in any genre, it’s not just the story you’re trying to tell, but how you tell it that makes it exciting. The Limey tells a simple revenge story through the eye of an outsider who must come to terms with his past as well as unravel his daughter’s life. With a sharp script from Lem Dobbs and an impeccable editing style from Sarah Flack, and gorgeous cinematography from Edward Lachman, director Steven Soderbergh crafts one of the best revenge thrillers of the 90s – that no one went to see.

I only saw The Limey because I worked at the movie theater and I got to help tech the print. I vaguely remember the trailer and our lobby poster, but nothing about this film’s marketing was memorable enough for it to stick with me over twenty years later. I was only curious because it had General Zod in it. Now teching a print can be a pretty crappy way to first watch a movie because we’d do it at around two in the morning after the last show let out and no people were in the theater. You have to be on a radio to tell the projectionist about volume, focus, etc. But The Limey blew me away. 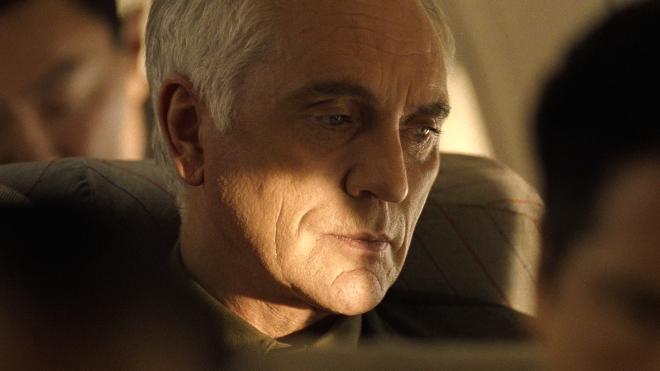 Once we made sure the levels were right and the framing would align with our theater’s janky screen masking, it was an intense 98-minutes! I kept telling everyone I knew they needed to go see this flick… and no one came. I know because I tore the tickets! In the end, I think we had this at our theater for all of two weeks, if that. Being a multiplex if a movie just wasn’t getting any butts in seats we’d string a print of another film that was doing some business between two platters and double the showtimes. To this day I encounter people who quizically ask “What’s The Limey?” and I inevitably go full film nerd on them.

With The Limey it felt like Terence Stamp came out of nowhere for this film. He’s been a presence in movies for sixty years now without any serious drought or absence from the screen, but he barrels into the film like a tornado delivering one brilliant scene after another. As much as the film plays to 60s and 70s British crime thrillers, it also rolls like a neo-noir detective story. One piece of the puzzle fits into place and he confronts another obstacle. But what helps make his character so interesting beyond the one-dimensional “man out for revenge” he’s reconciling his own life of crime as he uncovers the life of the daughter he barely knew. 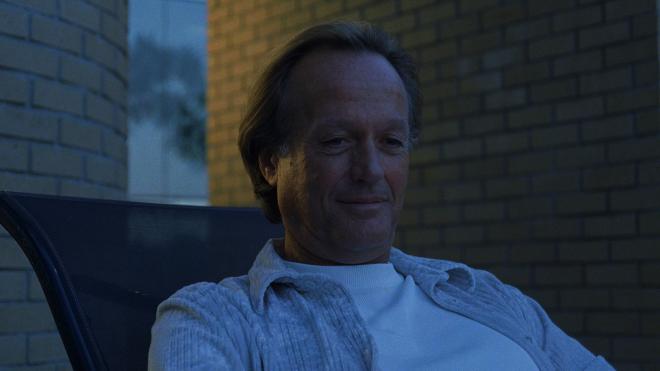 The film also stars Luise Guzman as the ever-helpful Ed, Leslie Ann Warren as Elaine, Barry Newman as the mysterious security man Avery, Nickey Katt as the assassin Stacey, Joe Dallesandro as Uncle John with Peter Fonda as the enigmatic object of Wilson’s rage Terry Valentine. Everyone is excellent in their respective roles; Leslie Ann Warren in particular delivers one of her best performances. The tough part about talking up the rest of this film’s cast is Stamp is just so damn good it’s rather easy to forget anyone else is in the scene with him, but they each get a moment to shine brilliantly.

Through Soderbergh’s tight direction, Dobbs’ excellent script, Lachman’s photography, and Flack's amazing editing style with a killer soundtrack and original score by Cliff Martinez, The Limey remains a heavy hitter in the revenge genre. I’ve met plenty of people who’ve never heard of this film but I’ve yet to meet someone who sat down and gave it their fullest attention and who didn’t walk away from it excited and ready to watch it all over again. While I don’t love every Soderbergh movie, I loved this one. I certainly did not like Full Frontal - but it was badass to see him link this film with The Limey through a single throw away shot of Terence Stamp’s Wilson on an airplane. There’s no logical reason for him to be there, but it’s a nice piece of trivia to look out for in case you ever do sit through that film. But speaking of The Limey, it’s one of my absolute favorite modern crime thrillers and if you haven’t seen it, this is the perfect time to check it out in all its glory. 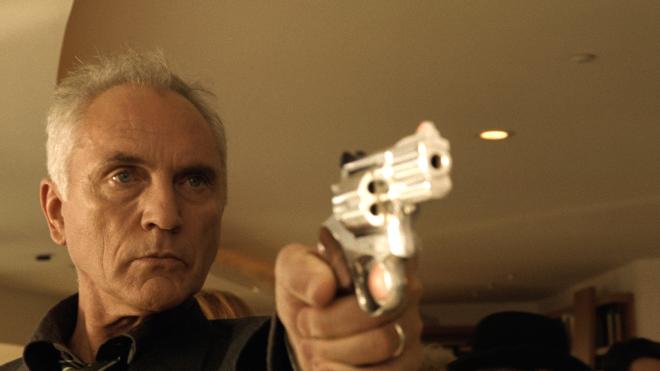 Vital Disc Stats: The 4K Ultra HD Blu-ray
Steven Soderbergh’s The Limey arrives on U.S. shores with a new two-disc 4K Ultra HD + Blu-ray + Digital set, currently exclusive to Best Buy in deluxe SteelBook packaging. The discs each get their own trays without being stacked. Each disc loads to an animated main menu with traditional navigation options. 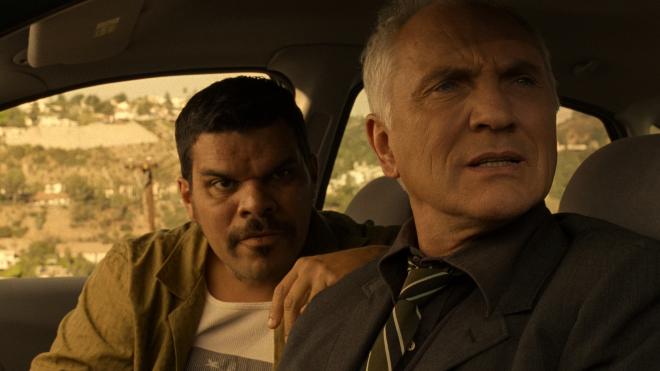 The Limey previously came out on 4K Ultra HD Blu-ray in France and other parts of the EU and it looks like the same excellent native 4K 2160p 1.78:1 Dolby Vision transfer crossed the Atlantic for this release. Flipping between the two releases, I didn’t see any differences. This is a stylish movie from the get-go using a variety of natural lighting locations and additional rigs to give specific scenes a certain look and feel - and it looks incredible! Details are sharp and crystal clear with clean lines and textures. Grain maintains the gritty feel of the film without any signs of smoothing or edge enhancement or appearing overly noisy. Facial features, clothing, production design, and scenic L.A. locations all come through with incredible clarity and image depth.

The only slight jumble to the mix is the intercut “flashbacks” that used footage from Ken Loach’s 1967 film Poor Cow starring an obviously younger Terence Stamp that gives Wilson a little bit of backstory. These elements are noticeably a different vintage, but considering they’re flashbacks the difference in quality isn’t a hindrance. Dolby Vision HDR offers wonderful enhancements to the sun-baked locations casting a natural yellowish hue to the image. And again, depending on location, lighting source, and flashback status, coloring isn’t exactly an easy one to pin down suffice to say reds, blues, and yellows have a healthy presence throughout. Black levels are spot on with nice deep inky blacks and rich shadows. This is a slick-looking transfer and works perfectly for this edgy, stylish thriller. 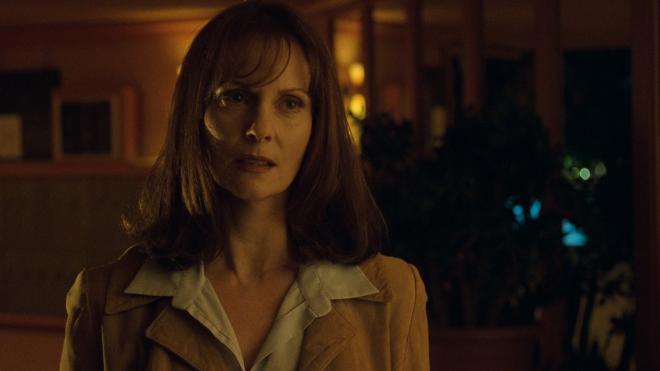 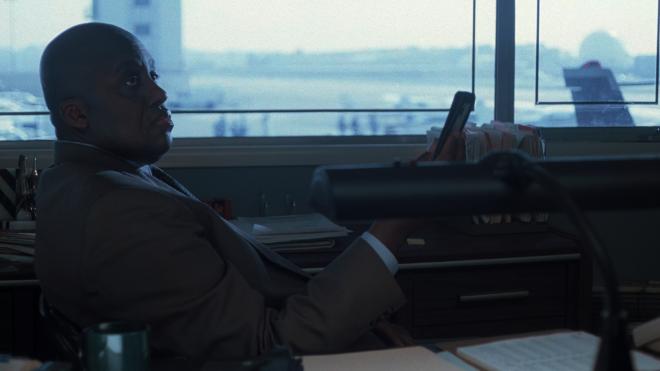 Like its EU sibling, The Limey scores with a nice Dolby TrueHD 5.1 audio mix. In addition to the badass dialog and music cues, the film has a wild and dynamic sound mix that perfectly accentuates the stylized editing. For example, Wilson could turn on the shower and the next cut will be him sitting on an airplane but the shower sound continues. Or dialog sequences that take place in multiple locations at different times all bleed together into one coherent stream. It’s beautiful stuff and this audio track holds it all together perfectly. Front/Center channels tend to get the most attention, side channels work in with a lot of ambient effects. It may not be the most aggressively immersive mix ever, but when and where called for it’s fully active and engaging. 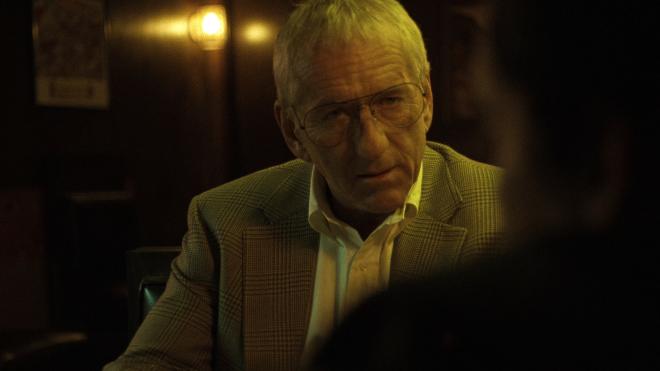 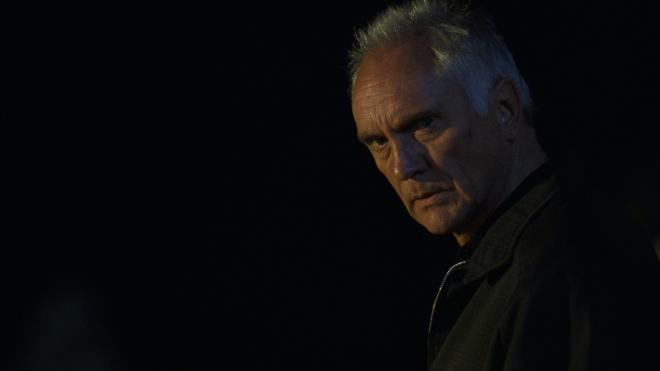 This release doesn’t have the biggest or most robust selection of extras, but what we’re getting here is pretty solid stuff. Both of the commentaries are informative, the Soderbergh and Dobbs one being the better of the two… and the most intense to say the least! It is a lively discussion if you’ve never heard it. The second cast and crew commentary is culled together from various solo recordings of the respective participants and it’s pretty good too but not as spirited, so to speak. Now the French 4K disc offered up additional new and archival interviews - some only in French without subtitles, but there was a great 20-minute new interview with Soderbergh that sadly didn’t come to this disc. So keep that in mind if you’re aiming to add this film to the collection. 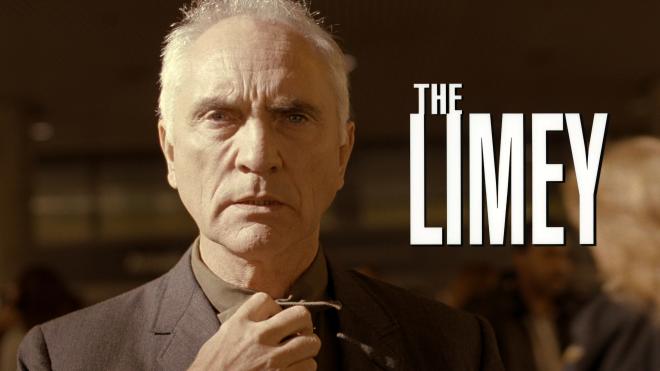 The Limey is a neo-noir crime thriller classic. It may not have been a huge success but it managed to bring back Terance Stamp in a new iconic lead performance and also helped reignite Steven Soderbergh’s from small independent features to larger Hollywood productions like Erin Brockovich, Traffic, and the Oceans Trilogy. But speaking specifically to this film, it’s uniformly excellent and captivating from frame one. And now finally, at long last, The Limey comes to a format that’s far and away better than the ancient DVD. To be honest, I would have gladly settled for a Blu-ray but I’m over the moon that this film was recognized for what it accomplishes and has been given one hell of a beautiful 4K Ultra HD Blu-ray release. Complete with an excellent audio mix and a decent enough set of bonus features, again that audio commentary is legendary, The Limey is another essential addition to the 4K collection Highly Recommended.