Cause they are the Aqua Teens and they make the homies say ho and the girlies wanna scream! Master Shake, Frylock, and the lovable Meatwad join voices for the incomprehensibly silly Aqua Teen Forever Plantasm. If you remember their last feature film effort, this is more of the same sort of nonsensical randomness that the show is famous for, it doesn’t quite work for long-form storytelling but still delivers plenty of laughs. The Aqua Teens go 4K Ultra HD Blu-ray with a solid 4K SDR transfer that easily outpaces the included Blu-ray, clean audio, and a smattering of decent bonus features. Ultimately an experience appealing to a very select audience - For Fans Only

After breaking up, the Aqua Teens are now flying solo. The acerbic Master Shake (Dana Snyder) is homeless hoping that his former neighbor, dear old Carl (Dave Willis) will take him in. Meanwhile, loveable innocent Meatwad (also Dave Willis) works for a local animal shelter making sure its supply of adoptable dogs never runs out. As for the floating genius Frylock (Carey Means), he’s running tech support for mega-conglomerate Amazin. Little do they know Amazin’s vertically-challenged owner Neil (Peter Serafinowicz) has a dastardly plan to supplant the world’s entire workforce! 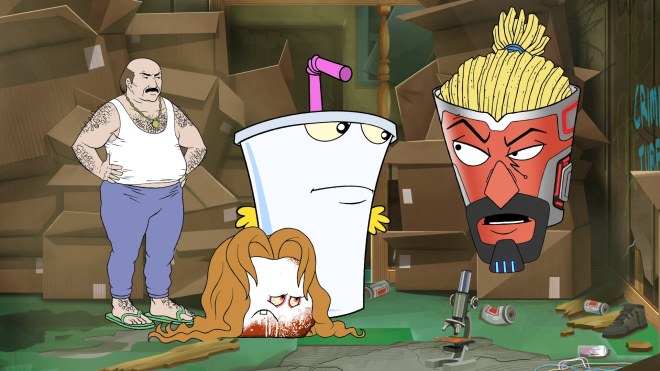 That synopsis actually makes far more sense of the plot than the actual film does. As any fan of the iconic Adult Swim series well knows, random humor is the name of the game as the Aqua Teens face any number of odd personal obstacles. For an hour and fifteen minutes, we watch as the story lumbers from one nonsensical - but often hilarious - plot point to the next. From Meatwad living in an animal shelter to Carl trying to flip the Aqua Teen’s old burnt-out home to the Mooninites interrupting the movie to deliver some fourth-wall-breaking insults, Aqua Teen Forever: Plantasim doesn’t make a lick of sense, and in all honesty, I wouldn't have it any other way.

If you’ve seen their previous and short-lived theatrical outing Aqua Teen Hunger Force Colon Movie Film For Theaters you have a pretty good idea of what to expect. If that random loud and sometimes disgusting showcase of hilarity is your bag of tea, you’re in good shape for this outing. If you were a passing fan when the show was still called Aqua Teen Hunger Force before it took on the moniker of Aqua Unit Patrol Squad or Aqua TV Show Show, this film is even more random, weird, and bizarre. And that may be more than what most folks could handle sitting through. But if you can make it through you get some hilarious set pieces along with a pitch-perfect slap commentary with the new character Neil - a ridiculous amalgam of tech-bros Jack Dorcey, Jeff Bezos, and Elon Musk. 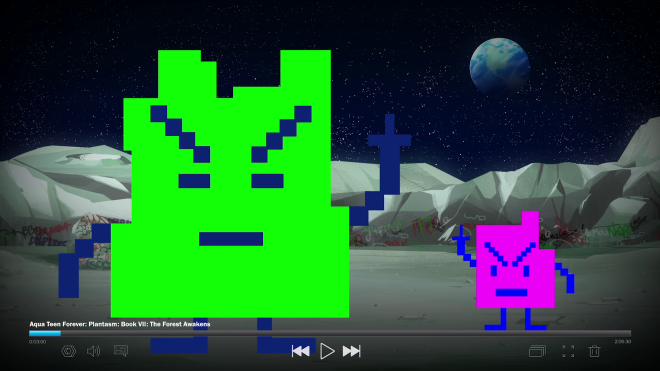 Truth be told, Aqua Teen Forever: Plantasm feels like it works best as the show did; in ten or fifteen-minute bursts. If they re-edited it down to a series of five or six little episodes that told something of a long-form story, it might have worked better. There’s only so much odd-ball absurdity the mind can absorb before you click out. But even as weird, random, and gonzo as it gets, there are some genuinely hilarious pieces to the film that makes the venture well worth the time. And honestly, the world could use a little more Carl Brutananadilewski right now, as disgusting as he is.

Vital Disc Stats: The 4K Ultra HD Blu-ray
Aqua Teen Forever: Plantasm saves the day on 4K Ultra HD Blu-ray in a new two-disc plus digital set from Warner Brothers. The discs are housed in a standard 2-disc case with an identical slipcover. Also included is a mini-poster that’s actually slipped in between the disc case and the slipcover - it doesn’t easily fit inside the actual cases, I tried. The discs load to static image main menus with traditional navigation options along the bottom of the screen. All images for this review were sourced from the 1080p Blu-ray.

So… why was Aqua Teen Forever: Plantasm punched out on 4K Ultra HD Blu-ray? It doesn’t offer HDR and looking inside the disc, which I presume is a BD-66 disc, the film only eats up about 30gigs. On the Blu-ray, it takes up only 10gigs of a BD-25. In truth, my theory is that this 4K release is something of an elaborate prank on fans and physical media collectors. Thier past disc releases with their elaborate bonus features or menus and the infamous Season 3 "Play All" function bare that idea out. Watching through the film a couple of times now, I got a hunch that’s the case and if true, it’s actually kinda funny.

Now while this film certainly does not need to be in 4K, even this 2160p SDR transfer offers up a notable improvement over the included Blu-ray disc. While “details” such as they are may not be vastly improved, movement, colors, and fine lines see a notable benefit. The opening starfield for example is much cleaner, and clearer, with a brighter sparkle to the stars, and the animation is smoother and cleaner without any anomalies that are frequently seen on the standard Blu-ray. The 1080p version also looks notably flatter. Some sequences in 4K hold a bitrate well into the 70mbps whereas the Blu-ray barely tops 15mbps. This follows throughout the film even when very little is on screen. For such a flat 2-D animation style with only a few 3-D flourishes, there’s not a whole hell of a lot to say about this transfer beyond the Aqua Teens look better than they ever have, and this disc is certainly better than the Blu-ray. 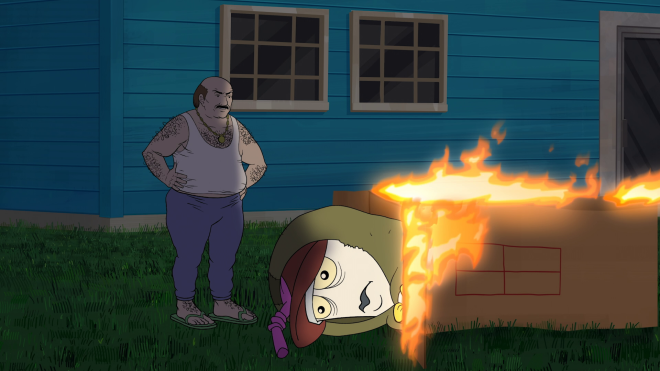 Both the 4K disc and Blu-ray ride high with an effective DTS-HD MA 5.1 audio mix. Much of the film is front/center focused, but it rolls nicely for all of the big scenes and scenarios. Dialog is clean and clear throughout so you never miss a gag. Sound effects and scoring nicely accent the track so spaces feel full. As the film progresses and things get even weirder, the mix takes up the task of filling out these random scenarios without any trouble. Levels are spot on. 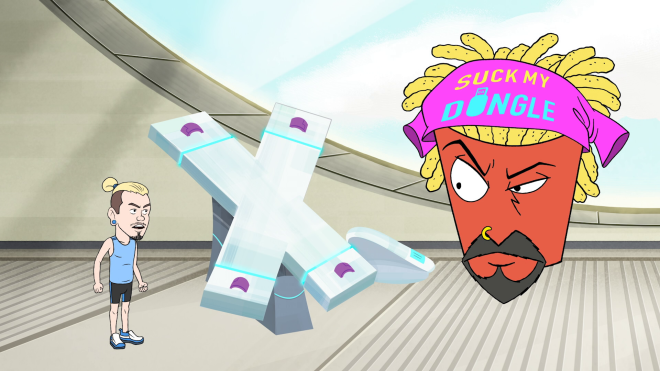 This set comes with a decent assortment of bonus features to complement the randomness. The biggest highlight of the film is the stuffed Audio Commentary with a massive variety of personalities commenting. They cover a lot of info about making the film but also keep the track lively and hilarious making repeat viewings worth the effort. On the Blu-ray disc, an “Alternate Cut” is billed but it’s in fact an animatic version of the film that runs roughly five minutes longer. It’s a little different here and there but since it’s not finished, it’s more of a curiosity. There are 22 deleted scenes that only run a bit over 4-minutes in total. They're so fast they last mere seconds which again, if you’ve bought any of the past DVD sets of the series, this too feels like another in-joke. 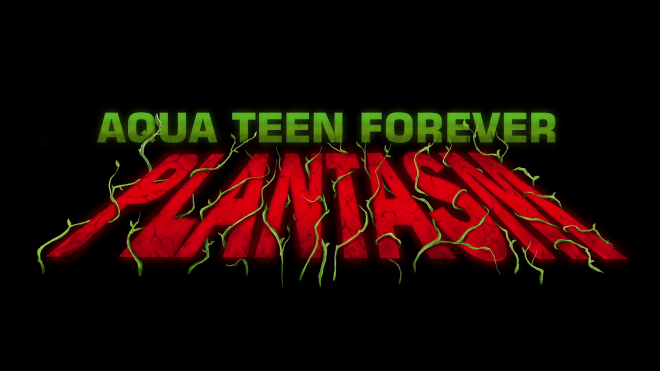 Aqua Teen Forever: Plantasm was certainly made for a very select audience… Aqua Teen fans. This film doesn’t do anything to bring in newcomers unfamiliar with the show’s various iterations on Adult Swim. The story, such as it is, is loose and makes little sense, and is often completely bonkers, but it’s pretty damned funny. Warner Bros. gives Aqua Teen Forever: Plantasm a rather weird 4K Ultra HD Blu-ray release. With a disc that doesn’t utilize HDR, it does offer up a richer presentation than the 1080p disc, but don’t expect it to blow your devil clown-possessed hairpiece back. Audio handles the workload nicely for this film, maybe too nice for some specific Carl-related sound effects. Bonus features may not be a massive assortment but the audio commentary is a gas. Again, this isn’t a movie for everyone so if you’re new to Aqua Teen then you’ve got some homework to do. But if you’re a fan, you may well find something to laugh at here. For Fans Only.