“Is this what’s next?" asks sleazy video entrepreneur Max Renn in David Cronenberg’s 1983 horror/sci-fi masterpiece Videodrome. Arrow Video responds with a 4K Ultra HD Blu-ray edition that carries over all the previous supplements from their previous Blu-ray release and offers the definitive presentations of both the theatrical and director’s cuts of the film. The new director-approved 4K restorations are aided by stunning Dolby Vision HDR that makes Rick Baker’s legendary effects look better than ever. For Cronenberg and horror fans everywhere, it’s time to set up your minds for broadcast with this Must-Own release!

There’s simply nothing I can say at this time that hasn’t already been said about Videodrome. It is every bit the masterpiece that viewers and critics alike have agreed upon for decades; a film that crawls deep into your subconscious and shocks to this day with its take on how New Media has affected how humans think and act. And in classic Cronenberg fashion, it’s all done with goopy gore that smashes the boundaries between imagination and body transformation. He did the impossible, which was build a bridge between the kind of prestige dramas and seedy horror that occupied theaters in parallel, but never quite together in the way that Cronenberg could create.

As with most of Cronenberg’s work, there’s an element of solipsism in the film’s hero that the filmmaker intends to both exploit and create empathy from. Max Renn is a preening self-promoter in the worst way possible, yet his humbling by way of escalating psychosis cuts deep thanks to the self-effacing script. Where something deep, dark and disturbing is found within the grainy tape masters, so can a great deal of irony. It’s a difficult thematic balance that Cronenberg has made his playing field, yet it benefits from the filmmaker’s own skill for making the most prophetic of concepts seated in real-life anxieties. While the horror is on the outside in Cronenberg’s films, these are creations of the interior mind of an individual, a mix of ego and projections.

Upon the umpteenth rewatch of Videodrome, my focus went directly to the key effects sequences in the film. First, the scene of Renn crawling into Debbie Harry’s lips on the TV remains some incredibly haunting imagery, supplanted by the overbearing and downright dystopian feel to the universe in which this moment operates. Each cut in the sequence highlights the grotesquerie just enough before letting Max turn in on himself. What can be taken as good editing is absolutely something more, Cronenberg’s gaze and Renn’s awakening become entangled for the rest of the film. 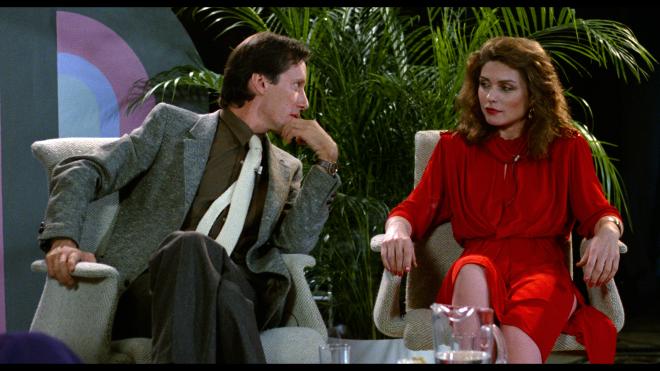 While James Woods has revealed himself to be a bit of a quack that becomes more and more eerily similar to Renn as the years go on, this is still among the actor’s best performances. Woods has that on-edge tone that’s reflected perfectly in Renn’s selfishness. And as Renn retreats inward, becoming more jittery and innocent as his transformation continues. The desensitization of the character actually increases the intimacy. One of the many miracles to be found within Videodrome.

Vital Disc Stats: The 4K Ultra HD Blu-ray
Throw up those flesh handguns and overthrow faceless corporate entities with Videodrome’s single-disc (BD100) release that comes housed in a black Elite case with six accompanying postcards and reversible insert artwork with hardstock slip box. Also included is a 60-page booklet and double-sided mini-poster. The disc boots up to a menu screen playing various clips from the film, with the options to choose a version (theatrical or director’s cut), play the film, browse special features and set up audio and video. 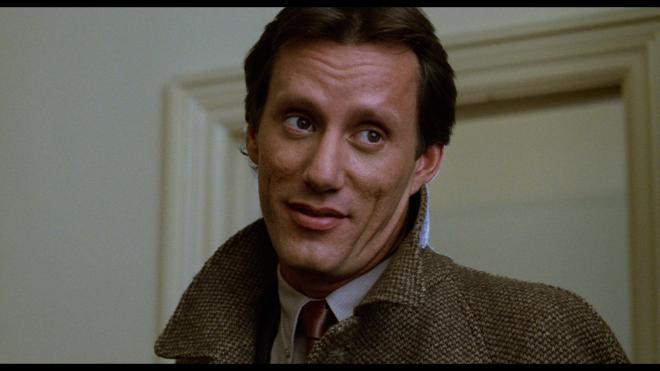 Death to Videodrome? The new 2160p transfer aided by Dolby Vision HDR is anything but. Both cuts are available here by way of seamless branching. This is without a doubt the best the film has ever looked at home, even easily succeeding both Arrow and Criterion’s previous Blu-ray releases of the film to become the definitive presentations of Cronenberg’s masterpiece. Bitrate is consistently very high across both presentations, truly pulling the most out of these transfers as possible.

It’s clear immediately that the new 4K restorations offer much better, more consistent black levels and shadow details, two of the biggest areas of concern on previous releases. Those dark and expressive red tones are a key highlight throughout, with the Dolby Vision HDR layer imbuing them with remarkable, even oppressive depth that is for sure Cronenberg’s intention. The Dolby Vision HDR doesn’t clip or distort the broadcast transmission any further either. If anything, it emboldens the disparity between the dream logic of Renn’s world and the jarring distortions of broadcast video while preserving the latter’s otherworldly qualities. Flesh tones are a big star as well, looking handsomely anemic and exactly the way I remember them after seeing Videodrome projected on 35mm. There simply cannot be enough said about how terrific the film looks here. Proceed with the utmost confidence. 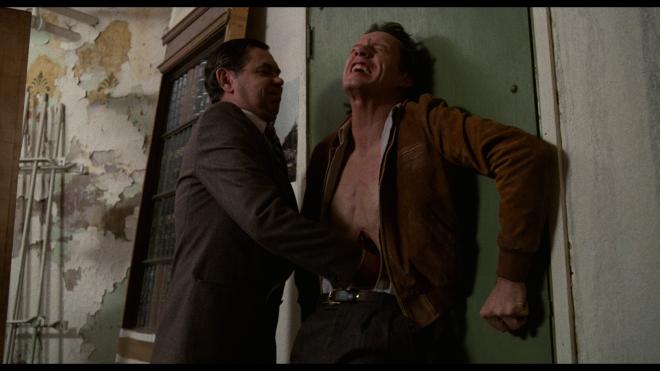 Both cuts of Videodrome are presented with 1.0 DTS-HD Master audio tracks that improve ever so slightly upon the LPCM mono tracks included with Arrow and Criterion’s previous Blu-ray releases of the film. Dialogue is clear and robust when need be, with those gooey sound effects coming through organically. Bass isn’t too expressive across the presentation, but it gains some really nice low-end notes in the finale’s most brooding moments. 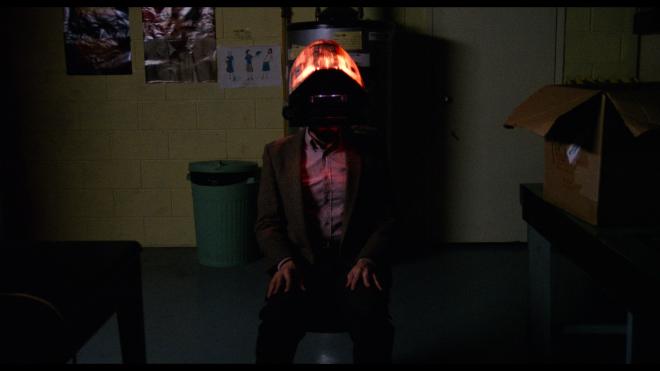 Videodrome has been bestowed with feature-filled releases before from Criterion and Arrow, yet this new edition compiles previous features and adds some physical goodies to make up for the lack of newly produced featurettes. There’s a new critics roundtable to dig into within the 60-page collector’s booklet that talks about the film’s lasting legacy, and there’s a really nice double-sided poster that comes in the limited-edition hardbox. All the old features are offered here with Dolby Vision HDR as well. It doesn’t add much to the SD features, but it’s a nice touch anyhow.

First it controls your mind…then it destroys your body! Long Live the new flesh! Videodrome gets upgraded to 4K Ultra HD in spectacular fashion from the team at Arrow Video, compiling previous special features and some new physical goodies to round out this new limited-edition release. The new 2160p presentations aided by Dolby Vision HDR will have you in awe at just how beautiful has been rendered in 4K. Don’t walk, run to buy this Must-Own release.